The last gallery page isn’t quite done yet, but! A lot of rearranging has gone down over the past week and if you’re feeling the curious you might like to go through the other pages again because they’ve got a bunch of new stuff happening (and by “new” what I actually mean is “really fucking old and embarrassing” on my part).

However, none of that really has anything at all to do with today’s entry.

See, every so often I go outside and pretend to be a responsible adult. Nobody who knows me ever falls for it. Thankfully I’m a social recluse and can count the amount of people who actually know me on one hand. As far as everybody else is concerned? This shit right here is 100% legit.

Having the mentality of an emotionally unstable 6 year old can lead to problems though; there’s only so much social bluffing one can do before people start catching on to your ploys. The accepted tactic here is to pretend like you have a thing to go do and make a quick getaway before they get the chance to question it.

“Mai, seriously, cut to the chase.”

Yes, okay. The truth is: I do not understand business cards. There. I said it.

I like business cards well enough. Don’t think I’ve ever passed up the opportunity of taking one where they’re freely available. Keep the nice ones in a little box and everything! 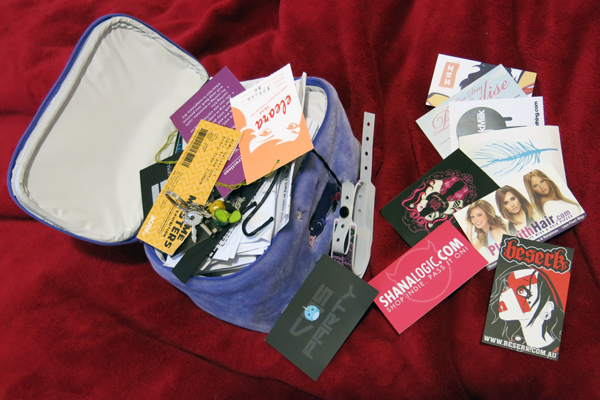 But isn’t that just it? The box is full of all sorts of crap and once stuff goes in there it generally doesn’t come back out again. Out of sight, out of mind. Do people actually use business cards? I… I suppose they must, in order for the market to exist. But other than giving them out- do the people who take them actually utilise them for their intended purpose? Personally I always go for the Google approach to looking things up and business cards are more like a fun- but ultimately redundant- collectible.

Prior to this year I never considered business cards as something relevant to my life. Why would they be? You have Internet? Great! Look me up. Here, I’ll write it down on your arm. Pretend like I’m a pretty girl giving you my number only instead of a pretty girl it’s an androgynous 14 year old boy and instead of going on a date you’ll come to this weird art site and lose all respect for me. It’ll be fun. Pinky swear.

But suddenly it’s like… people over a certain age can’t do that… I guess? Probably 20 different people have asked me for a business card within the past six months and while I could bluff through it saying “Ohh… I’m moving and re-building my site so there’s no point right now” that obviously wasn’t going to work forever. Then I actually sat down and thought about it and… I know a lot of people who carry and hand out business cards?! It was like some kind of crazy revelation to my undeveloped child-mind.

They aren’t even of a certain age or in any specific field. I know casual cosplayers who are still in highschool who hand out little business card type things with their Facebook or DeviantArt on them! Not only that but… it kind of makes sense? Even if you’re in a social rather than business setting; people don’t always catch each others names and if you don’t have mutual friends then tracking down the connections made at conventions can be a hell of a task and often prove futile.

Equipped with this epiphany I asked around for recommendations on where to obtain business cards.

Aside from cost, the only real constraint for me was being able to upload my own designs. None of that template bullshit. That’s for suckers who aren’t (still) trying to validate buying a Cintiq. 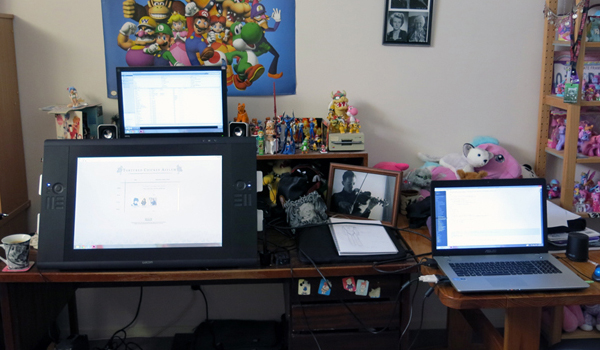 By the way, I got the 3rd monitor hooked up- didn’t even end up getting a docking station! The monitor plugs in through VGA and the Cintiq through HDMI. Ah, technology. Got a wireless keyboard too- just a little Logitech thing to match the Trackman Wheel, tucks in neatly behind the Cintiq when not in use.

One name kept popping up with the business card enquiries: “Moo”. Go to “Moo”. Get “Moo” cards. “Moo” are really good.

It weirded me out. “Moo” is not a name that fills me with confidence for a company supposedly dealing in paper and card items. Sounds more like they should be marketing dairy snacks to prepubescent children. But then, having the mentality of a 6 year old, maybe they’d be right up my alley?

So, on the 14th of May 2013, armed with a series of vector designs saved as .PDF, after spending more time than I’m going to admit constructing a QR code, I went to Moo.com to place an order.

Uploading the designs was simple, and while all the fronts must remain the same, Moo give the option of having up to 50 different designs on the backs. I went with 10.

You can download guides to design your own cards from the Moo site (these show the bleed lines and “safe” area- simple rule is: keep important things inside the “safe” area so they don’t get accidentally snipped off)- which is what I did, or use their ready made templates and just type in your info and upload a logo (if you have one).

Once your designs are uploaded and ready to go you get to choose paper type. I was in a strange mood that day and decided to go for their fancy “Luxe” cards because fucking why not?! #YOLO

Luxe are on thicker card stock and get a colour stripe down the middle. 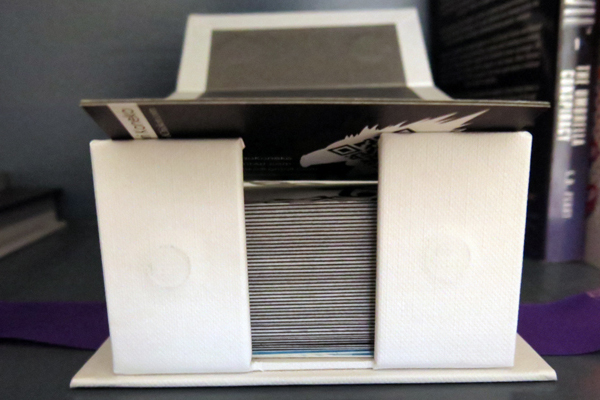 Got a black stripe because too many colours make me uncomfortable.

After choosing the paper you make the order for reals and trues. With the forking over of dollars and what not. Then you’ll get an email saying your order has been placed. A day or so later you’ll get another email saying that a quality check has been performed (not sure if this happens when you use their ready-made templates? It might only be an issue where people are uploading their own images) and, assuming there weren’t any problems, that the order is scheduled for printing and packaging.

Wait a couple more days and they’ll let you know that your order has shipped along with a tracking number and estimation for delivery time.

Mine shipped on the 17th which I thought was quite fast, just three days where they warned it might be a week or so (but then they probably give worst-case-scenario time frames just to be sure). The cards were physically in my grubby little paws on the 29th (the estimation I was given said they’d be here by the 3rd of June, so nobody is complaining when they arrive a few days sooner than expected).

The packaging… was… ridiculous.

The parcel was ordinary enough, and boxes unassuming. 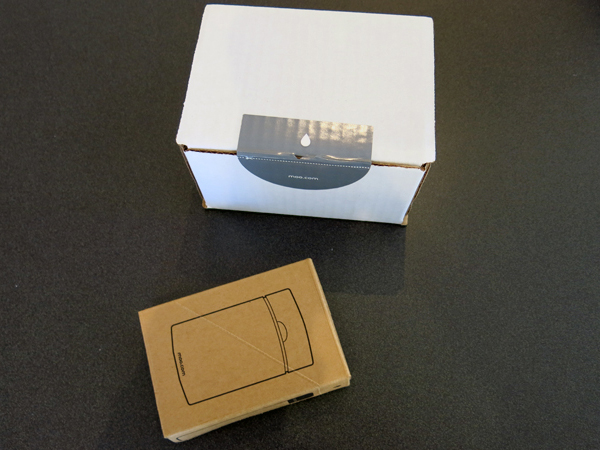 The brown box has a card holder because, shit! Why not? Apparently I wasn’t doing things half-way on the 14th. 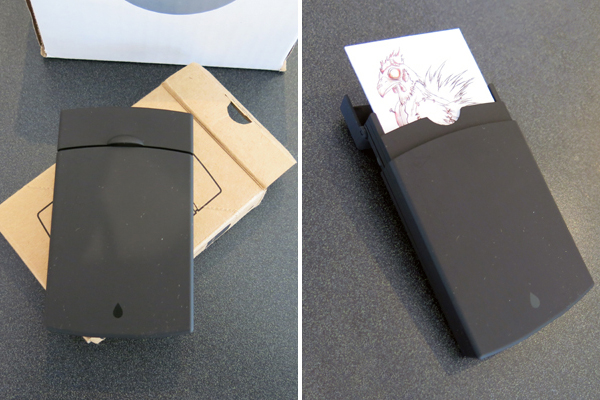 The card holder is wanky as shit but we’ll discuss that shortly.

The white box? It contains… 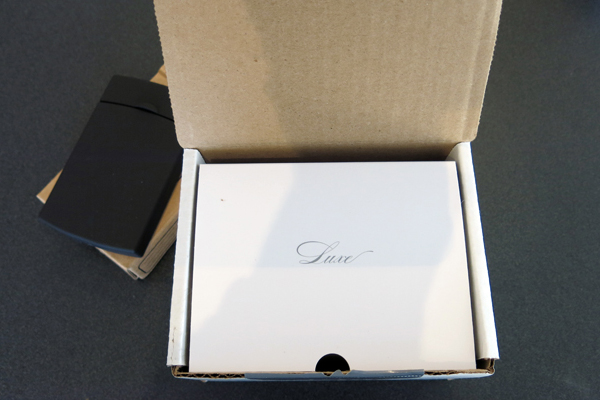 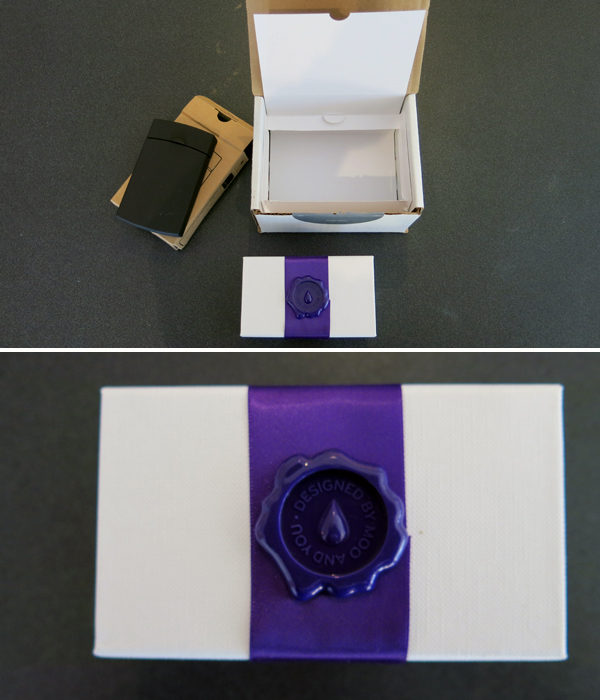 Pretty much just playing pass-the-parcel with myself at this point.

YET ANOTHER WHITE BOX- but! This one is wrapped in a special magical* ribbon.

So then you open it and finally there are some cards. Like playing pass the parcel with myself because I have no friends. I mean… not that it isn’t nice to receive the prize at the end but you didn’t need to draw attention to my interpersonal shortcomings like that. Gosh. 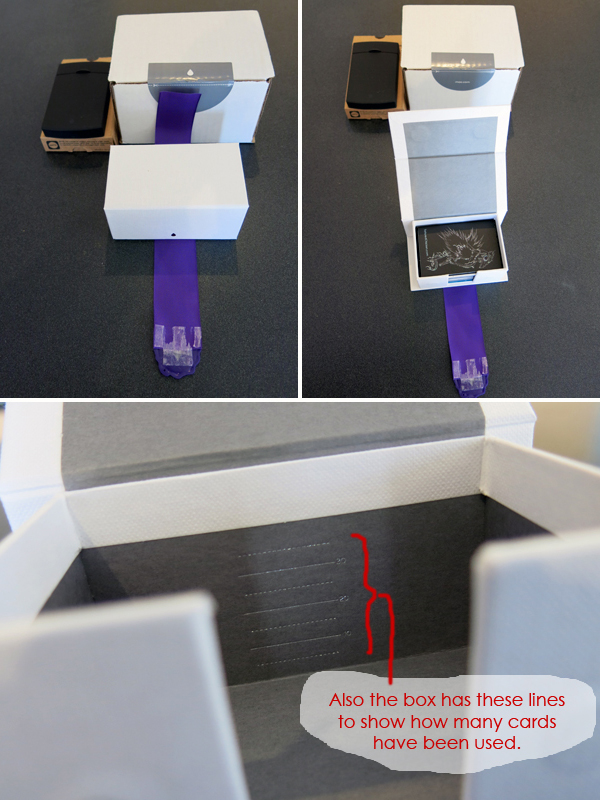 The cards are nice. Solid. The colours came out bright, images are crisp, text is legible, QR code scans properly, and nothing got mangled during the cropping process.

A few of Moo’s own business cards were included as well, these feature some little discount codes and such which is nice.

I only ordered a lot of 50 which I think is the smallest run they do? So if/when I run out and go back for more I’ll probably get a few hundred I guess. Offering discounts to return customers never hurts your chances of winning them back for round two, and if you have an account with Moo your designs will be saved so you can just hit up the “reorder” button all the way down easy street.

I have no idea what I’m talking about. 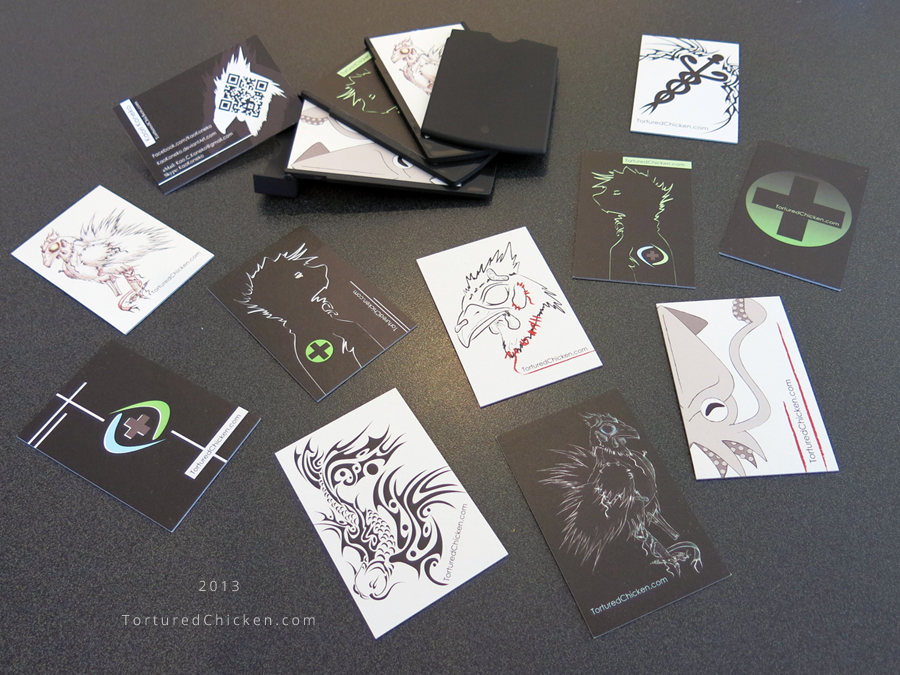 The pretentiously wanky card holding device only holds about 7-9 of the Luxe cards, because they’re so thick. I think you could get about 20 of the regular cards in there. It’s totally fun to play with though, the way it fans out to show off the different pictures on the cards. I got it because I know I’m likely to just throw cards in my bag and let them get mangled, always a dead give away when you’re pretending to be an adult. Having a wanky card holder makes people think you’re responsible and grown up. Little do they know that I simply enjoy the texture and fun fanning motion. 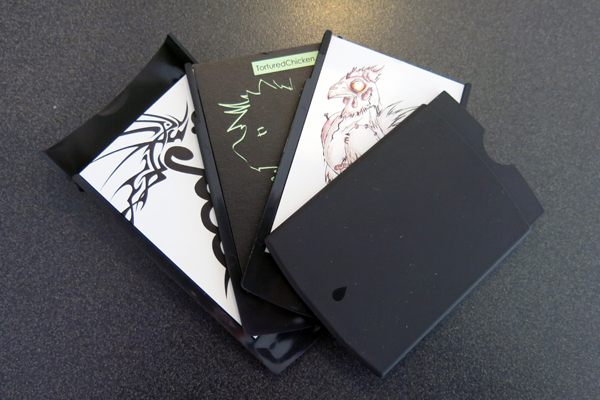 Probably time to call this the end.

Moo get a milk out of ten for their service. Because I don’t really understand the purpose of numeric scoring systems in reviews.

A set of 50 Luxe cards will set you back around $35 (larger orders get progressively cheaper per card and I believe there are some large scale company deals available as well), the wanky card holder was around $11, and postage/handling was just under $20, adding together for a total cost just short of $66.

Moo have US based and UK based sites. I used the US site so all prices were in USD, which came up a little cheaper in AUD due to the current exchange rate. Depending on where you are in the world depends on which one will make more sense to use.

My experience with Moo was positive and a little odd. Your experiences will be different than mine because you are not me and your cards will likely serve a different purpose to mine. I’ll probably be back there next time I need business cards in order to fool people into believing I’m a productive member of society.

They may not be marketing dairy snacks to toddlers but their brand is certainly “fun” in a way that could potentially lead to hipster cred. 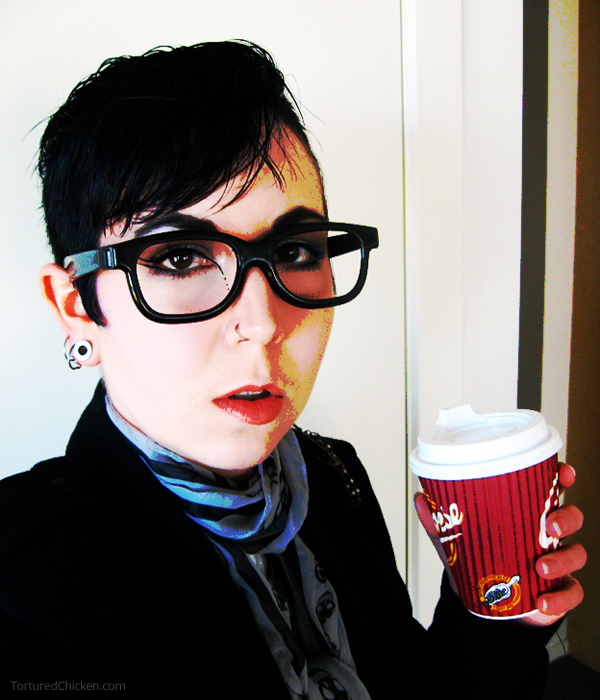 *Ribbon remains untested and may not actually possess magical properties.