We are yet again drifting awfully close to what the townsfolk in Animal Crossing refer to as “Present Day”.

Hopefully this year won’t find me feeling off all day or vomiting all night. Summer is fun, right? Tech Support was up watching movies while I was vomiting, he came down stairs briefly, not to check that I was okay or anything, just to point out that I, apparently, looked “like Edward Cullen.” Which I guess means pale, shiny, and desperately attractive to teenage girls? Then again, aren’t I always?

Last week I even put up some festive decorations despite no actual plans of hosting anything aside from that one thing that already happened the week before but I tried to put up decorations then and got angry about this one thing which wasn’t quite long enough to cross the tops of all the banisters- sometimes I get angry about things that are not relevant. 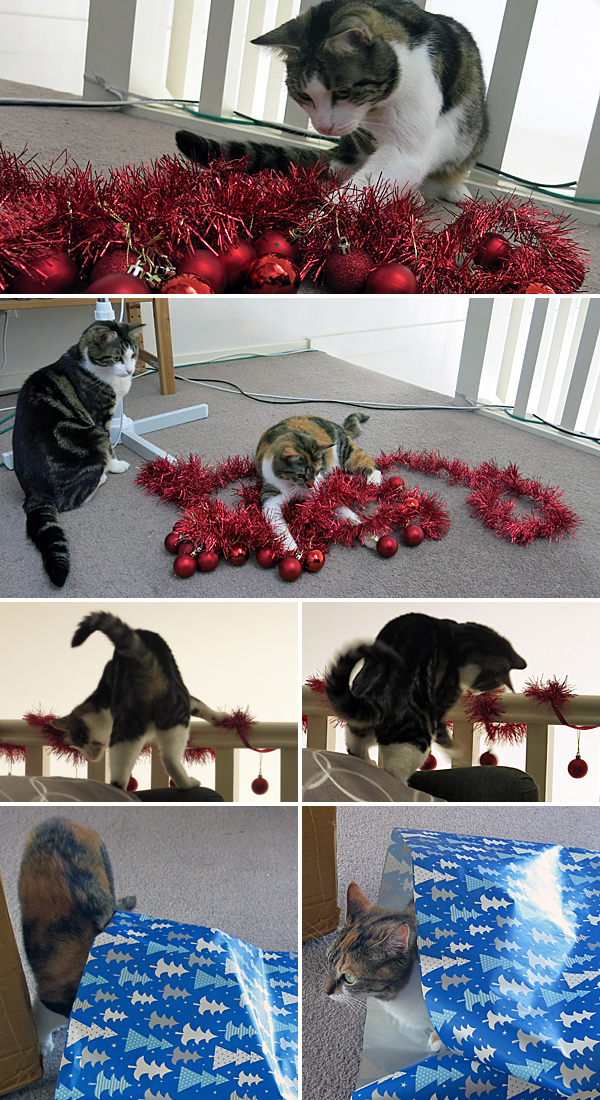 Claude got really excited about the decorations. Hobes, on the other hand, took several days to come to terms with the whole thing.

Gift shopping is done, presents are wrapped, items and cards have been posted or delivered, and everything else is ready to be handed out on Christmas day.

There is no tree here to arrange presents beneath. Plastic trees are not suited to my tastes, I tend to murder living plants very swiftly, and while cut trees smell pretty good I don’t think the mess would go down well.

A coupe of years back we had some sticks in a vase instead of a tree. We’ve still got the vase but now the makeshift tree consists of tinsel and paper reindeer.

Honestly the tree situation doesn’t phase me too much, I’m really just glad that;

With all that out of the way I can focus on finishing the goat for New Year and ensuring the next Separation Anxiety page is ready by the second. Hopefully one more costume will be finished during that time also but I don’t want to make any promises here.

As a little bit of a reward for finishing all the shopping and present duties I thought it would be fun to make eggnog. But then I remembered that we don’t often have guests and even when we do, most peoples eating habits are too disordered to just be polite and eat a damn mouthful of anything I make without profusely complaining about it and throwing the rest out. So eggnog seemed like a bad choice singe I get really uncomfortable about food wastage and that shit is chock full of eggs and milk. Did somebody say salmonella? Because that’s what I’d end up drinking. By myself. Maybe nobody eats my food because I’m just bad at cooking?

So instead I browsed some vegan recipes and came up with an eggnog inspired drink that will hopefully only land me in hospital for alcohol induced reasons, rather than gastroenteritis ones.

Preparation time: I dunno man, is prep time the time it takes to find all the ingredients in the pantry and measure them out? Or does it run with the assumption that they’re already out and you’re just mixing them together? What about when you suddenly realise you don’t have everything and need to make a trip to the store?!

Cooking time: There is no cooking. Only blending, which takes like 20 minutes maybe but probably would be a lot faster if you have an actual food processor- which I do not.

Clean-up time: Nobody ever mentions this with cooking. It’s messy as shit and when you’re all done and just want to enjoy a slice of whatever you just made? WHAM! 45 minutes of mopping and a sink full of dishes.

Total: Like half an hour or something I don’t know, I’m making this up on the fly. 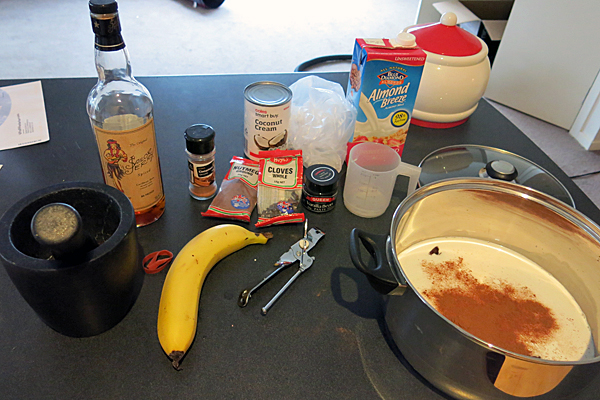 Feel free to add more or less alcohol to “taste”.

Throw everything into a big fucking pot in no particular order and blend the shit out of it until all the big lumps are gone. Except maybe for the two dates you ate before starting. I used a bar mixer because I don’t have a proper blender or food processor, it helps to chop up the dates and bananas first if you’re in this boat.

Recipes that automatically assume everybody owns a food processor and don’t offer any alternative preparation methods are bullshit and I hate them. 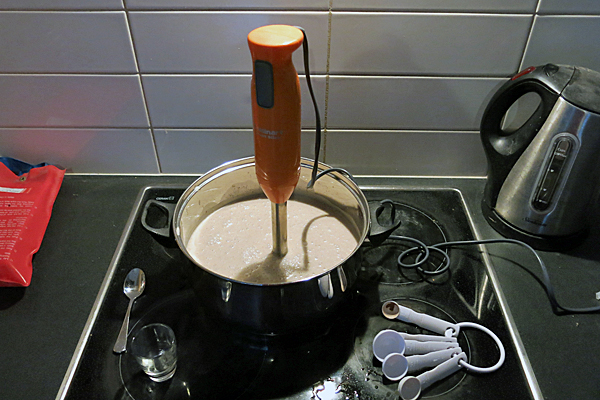 Seriously, that is it.

I thought about thickening it up with a little tapioca flour but found the consistency okay in the end. It’s also pretty good if you mix in a couple of tablespoons of chia seeds and psyllium husk, but not everybody likes the texture, so it’s better to just stir them into your glass while serving rather than forcing them on unsuspecting guests.

Also you can leave out the alcohol if you’re going to be feeding this to children or whatever. Or don’t. I can’t tell you how to live your life.

Then just serve that bastard in glasses or mugs or whatever with a little cinnamon sprinkled on top. Feel free to add ice if you like it cold. 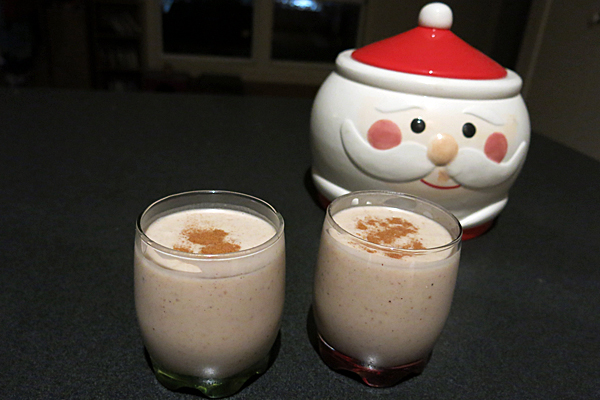 I’ll be drinking this for the next 5 months.

Heck, I’m sure it’d be fine to heat the whole pot up if you’d prefer it warm. But it’s summer here and I’ll be having none of that, thank you very much.