Late one evening I sat at my parents’ dinner table. The sun had set hours ago. Across from me sat my father, his face tired. Pained, even.

“Why?” He uttered quietly, pleading.

He’d already voiced regrets toward installing the Facebook messenger app on his phone, now there was a .PDF of Snowqueens Icedragons’ Master of the Universe in there waiting patiently for him to confirm these regrets.

My mother was laughing. She knows about my fixation on bad fanfiction (to be fair, my father does too, he simply does his best to ignore it). She also happens to be a writer, so perhaps some part of me validated sending the offending document to my parents under the pretence that it might be, in some way, “useful”.

Right now I can’t remember what sort of discussion led up to that point.* What I do remember is that it took me about an hour to figure out how to send a .PDF by phone. In my defence, I have never been comfortable with telephones.

That was… several months ago now. 10pm on August 1st to be precise. Ah, the wonders of time stamps!

More recently MaEmon contacted me via the very same FB Messenger app my father regretted installing with yet another chapter of the infamous Saucy Fanfic! This one was haphazardly scrawled in a school diary (or “study planner”). They were supposed to be used for tracking homework and assignment progress but… that was rarely (if ever) the case.

You know the drill…

Warning:
The Saucy Fanfiction was something MaEmon and I conceived during highschool.
Being the work of over-caffeinated sleep-deprived teenage pieces of weeb trash, rest assured this is at best going to be juvenile and poorly written, and at worst downright offensive.

Possible triggers (for this chapter) include but are not limited to:
Dubious consent, graphic descriptions of anthropomorphism, and technosexuality. Not necessarily in that order.

This work is only to be viewed by persons over 18 years of age.
Viewer discretion is strongly advised.

I call it “The Dungeon”! It’s seriously kinky in here!

Donatello had been left to his own devices in the tech room when someone grabbed him from behind, covering his mouth with their spiked fist hard enough to bruise. 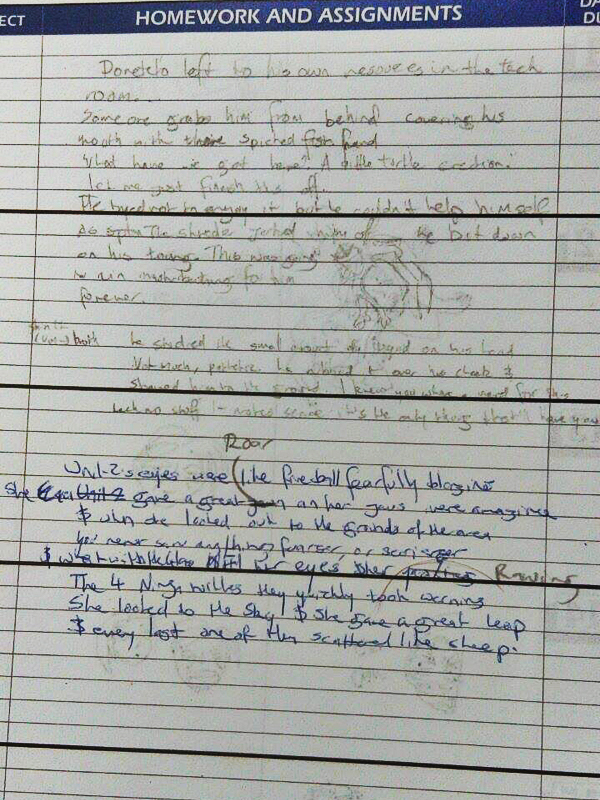 The Shredder studied the small amount of fluid in his hand; “Not much? Pathetic.” He wiped his hand clean on his cloak and shoved Donatello to the ground, “I know why you’re a nerd for this techno stuff now- since it’s the only thing that’ll have you.”

Well, you know, they don’t say Donatello does machines for nothing.

Unit 02’s eyes were like fireballs fearfully blazing, she gave a great roar and her jaws were amazing, and when she leapt out to the grounds of the area, you never saw anything fiercer or scarier. What with her leap and her eyes and her roaring, the four Ninja Turtles they quickly took warning, she looked to the sky and she gave a great leap and every last one of them scattered like sheep.

Wait, what? Was that a poem at the end? About Evangelion Unit 02 intimidating Ninja Turtles?! Hecking wild my friends, this is exactly the kind of quality content I am here for.

There’s no way I’d take this filth into my home.”– MaEmon, on The Saucy Fanfic

Shorter than the previous instalments, but when writing smut during classes you just gotta make do with the available space I guess.

The best part about the rediscovery of each additional chapter is how they’re always somewhere school related; the first being in a series of discussion questions, the second during an essay, and now number three in a study planner. Apparently the only things we planned on studying were fictional orifices.

Based on the colour and layout of the page it was scrawled on, I’m guessing this chapter was probably written during 2005. The year prior to my brother writing an unintentional haiku about bribery and sticking it to the refrigerator because I avoided human contact at all costs and fridge-notes were the most reliable form of communication since my hideous flesh prison would presumably require sustenance eventually: 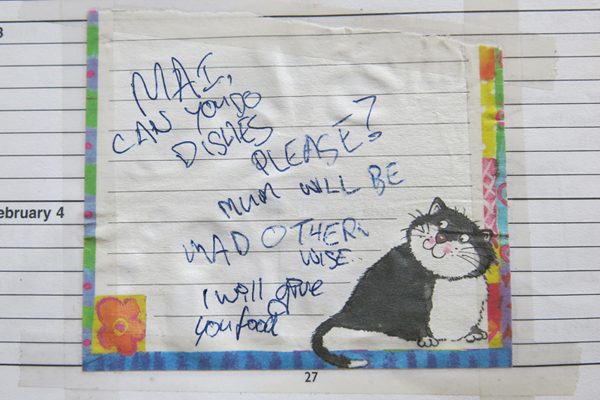 Mai, can you do dishes,
Please? Mum will be mad otherwise.
I will give you food.

*Remembered:
Father was wearing a Twilight T-shirt, he said it was for mechanical work, so his good clothes don’t get damaged, but that does not explain why he owns it in the first place?! At this point I don’t even really need to bully him anymore, he practically bullies himself. Engineers, am I right?