It has been a little over one year since moving the Asylum to its own domain. A double celebration no less; as this project originally began life back in 2004.

Officially ten years of the most gloriously self-indulgent procrastination!

Have I ever told you about the time somebody graciously informed me that I was: “Incapable of loving another human more than you love that stupid computer!” ? Well, that person was wrong and neither they nor the original computer in question have been a part of my life for a very long time now.

Computers come and go, but the Asylum grows and changes. Computers are merely the delivery mechanism, like every food ever is to hotsauce. Because apparently it’s not “socially appropriate” to chug hotsauce directly from the bottle.

As with the person who invented chocolate hot cross buns, when I find those responsible for the implementation of these unwritten laws of society, I am going to punch them. In the stomach.
Because violence solves everything.
Ever.

… Or am I thinking of duct tape?

In any case, please enjoy this history lesson with a small selection of images depicting a few of my desks and computers from over the years: 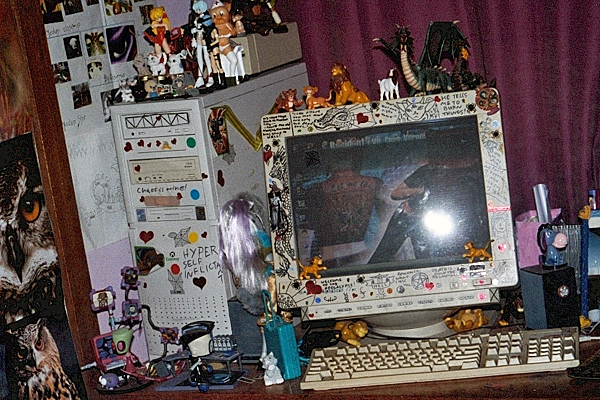 The presence of Piggy and positioning of the desk by the window dates this picture around 2004 or ’05.

It was sometime during ’04 that I decided having my own website would be pretty neat. Full of teenage hormones and onto my second computer (that is, personal computer; excluding communal household computers and those specifically belonging to other family members) already, I felt… not so much optimistic as spiteful and indestructible.

Social networking was just starting to take off around this time and while some years later, when that had all begun to settle down a bit, I’d cave and make a few profiles- between ’04-’06 I was having none of it.

Essentially, I learned HTML as a low-energy misled rebellion against the socially accepted online norms of my peers. 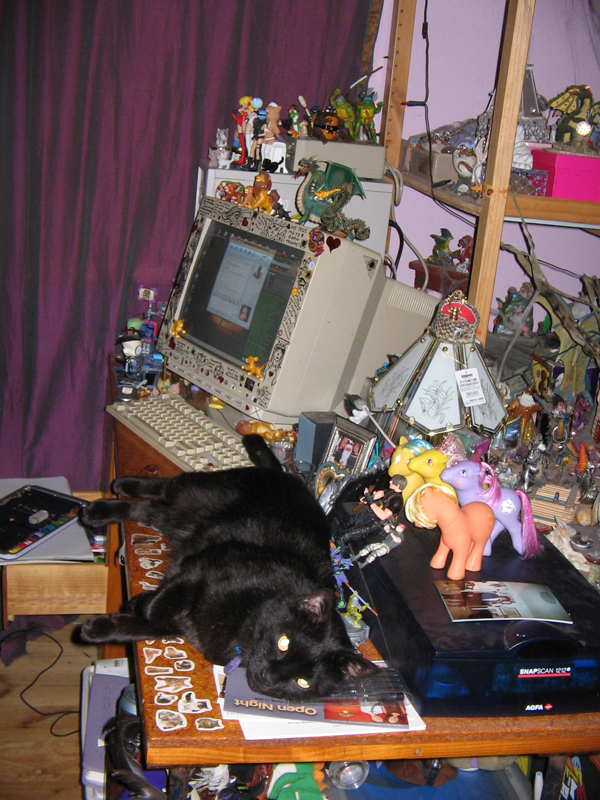 Positioning across the middle of the room and visible photos imply this one was taken late in 2006. Please note one of our beloved family Helpercat™s, Fred, doing what a Helpercat™ does best.

It was all HTML tables, red over black, cumbersome background images and irrelevant screen-caps from the Petz games I always had running in the background of whatever I was doing.

You know when you’re reading those articles about the shitty customers web-developers have had to deal with and all the terrible ideas they want to apply to their websites? The Asylum has been subject to every. Single. One. Of those terrible irrelevant ideas.

Maybe some people start building websites and they’re great right off the bat? But I am definitely not one of those people.

In all honesty my entire life could be summed up in that I’ve learned what not to do by, not just actively doing it; but legitimately thinking it was a good idea at the time! Then later realising that, actually, nobody cares about your virtual fish-chickens or extensive collection of My Little Ponies. Or maybe they do, but documenting both of those things on what is supposed to be an art site is kind of a not good idea.

With every year that goes by I feel less shame in admitting to things like that. Maybe because every year I learn that more and more of the people I respect the most have done similar things at certain points in their own lives? 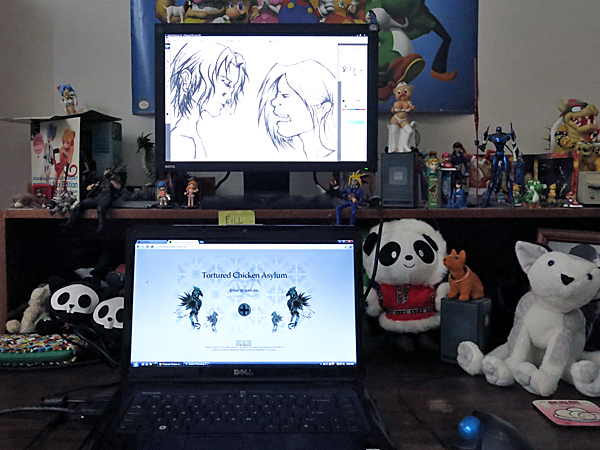 Krissy and the Panda date this one in early 2013.

Up until 2009, all of my computers had been desktop affairs in varying degrees of rubbish. Literal rubbish. The first two? On their way to being thrown out by my father’s workplace. Number three? Spare parts Tech Support had lying around.

Due to certain educational, occupational, and social decisions, 2008 saw me essentially living between four different residences- a situation which increased drastically during ’09, leading to the reconsideration of my heavy reliance on such cumbersome, immovable machines.

Later that year my sympathetic parents gifted me a Dell Inspiron, which barely left my side for a solid four years. 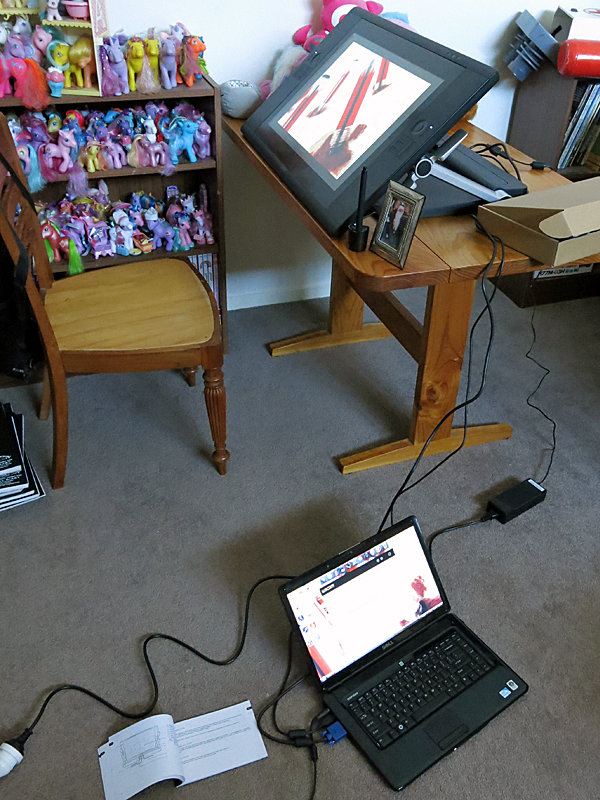 Mid 2013, not knowing what to do with a Cintiq and still using the Dell.

It was during 2010 that I settled down in a permanent residence, and finally began considering re-building the Asylum from scratch, a seed which had been planted during 2007 but never acted upon in more than a lazy aesthetic way. It would take a further three years before I’d truly acknowledge how dated the HTML tables really were and actually begin work on the project.

The arrival of the Cintiq during this time was not a coincidence and played an important role in the creation of Separation Anxiety– which is what ultimately led to the site’s move from my parents’ domain to my own.

Resource hungry graphics applications and a penchant for multiple monitors also led to the retirement of the Dell in favour of an Asus N-series. 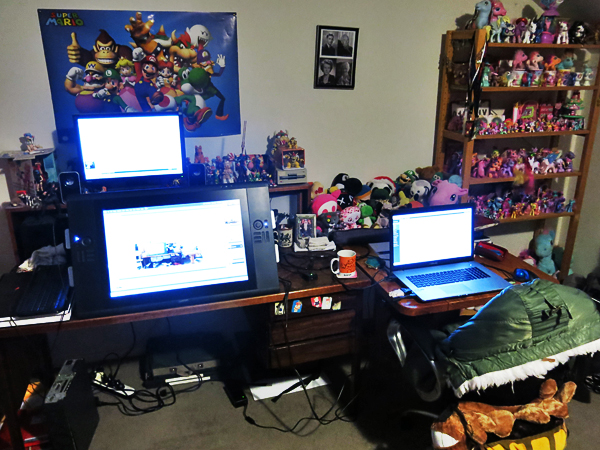 Now the primary and secondary desks are merged; a combination better referred to as “Battle Station Alpha” because adjusting the position of the Cintiq makes me feel like a science fiction villain.

A track-ball in place of a traditional mouse in a feeble attempt to cope with chronic RSI, an extra keyboard wired to the Cintiq for convenience- also because an altercation with leaky batteries has temporarily put me off wireless appliances, and enough cables for a decent impromptu bondage scene.

We’ve all come a long way. 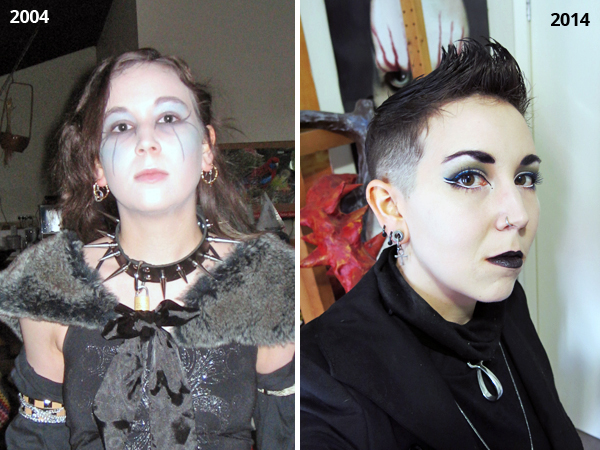 Give yourselves a pat on the back.

I’m going to go celebrate this milestone by ingesting enough caffeine to trigger cardiac arrest, then attempt to counterbalance one poor decision with another.

(It’s alcohol. I’ll attempt to counteract the caffeine with alcohol.)