Some months ago there was a costume party. It was briefly mentioned during the entry about hider-jewellery. Nothing to do with gloves, as my costume of choice did not involve gloves, right?

This is not about me.

But! I can probably find a way to make it about me.

You see my mother was in attendance of the same party.

True story: people as cool as me attend the same parties as their parents.

Also true: my mother has a super hero alter ego, the guise of whom was donned for the party in question. 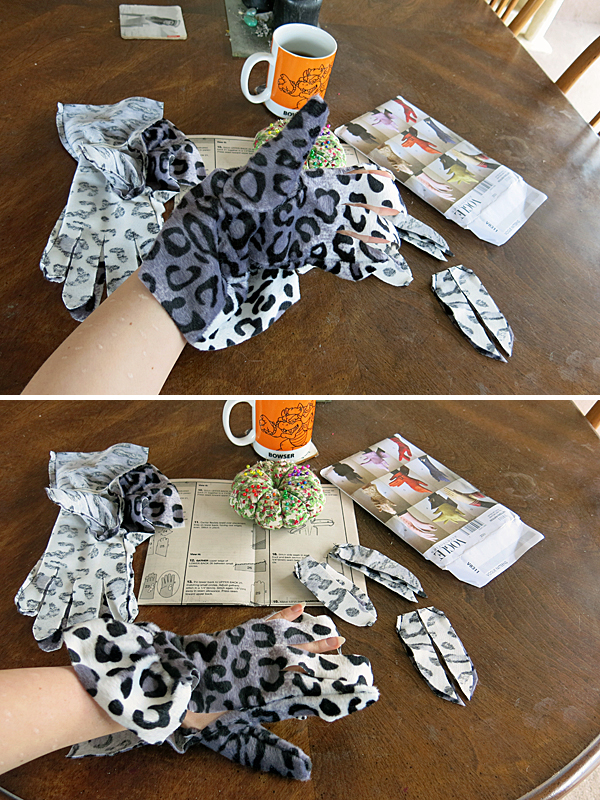 Wearing gloves: this is not how you do it.

This alter ego is known as “Super Apostrophe” and while her powers are generally based in the writing and editing fields, she has a personal vendetta against the plague of feral apostrophes raining down on society from the grammatically inexperienced. 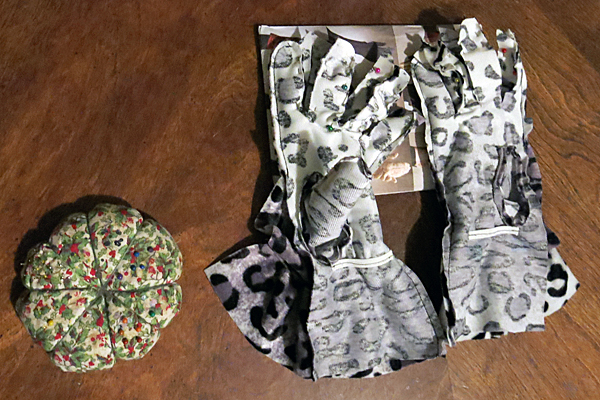 Many a feral apostrophe has been slain by her hand as she relentlessly defends the English language in its written form.

Each apostrophe slaughtered in the line of duty is skinned, when enough are collected they are fashioned into a garment and incorporated into her costume- as a warning to the others. 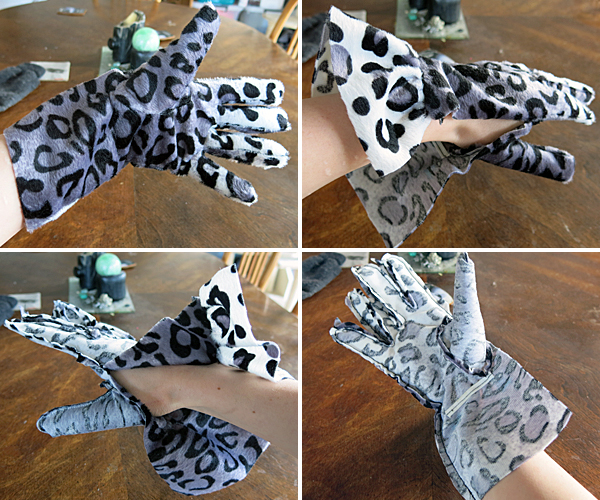 Point is, she was planning to make a pair of gloves from the real faux fur skins of actual feral apostrophes for her outfit but ended up running short on time.

At a later date, while visiting, the topic of gloves was being discussed and I mentioned how all of my attempts at drafting patterns for gloves have come up short. Mum said she was unlikely to use the pattern she had purchased again and so gave it to me, along with the pieces of the gloves she’d run out of time to construct. 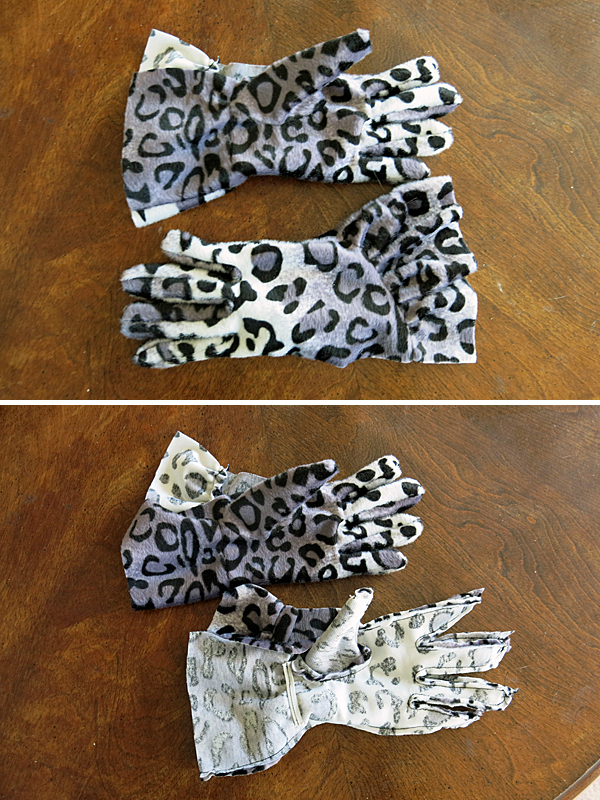 The pattern is Vogue Accessories V8311 and features eight variations (the pair constructed are version ‘H’).

This was my first time constructing actual gloves, though I did not draft the pattern. In the past I’ve relied on purchasing gloves in the desired style second-hand or from dollar stores and altering them where accuracy was unavailable. This has led to awkwardly being painted, glued, and sewn into projects in varying degrees of pain.

No doubt a legacy that will continue depending on the project at hand, but perhaps less frequently now that another option is readily available. 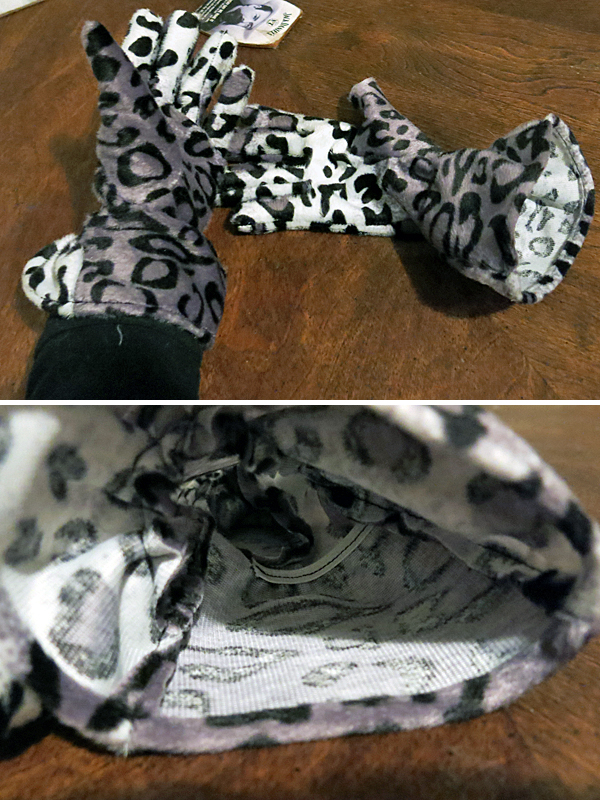 Of course, fur in any form is not the most user-friendly of fabrics to be starting out with.

This is the first time I have used a pre-drafted pattern (as opposed to drafting my own) since 2007. Construction was surprisingly straightforward considering the glove-based difficulties riddling my past… incompetency isn’t always logical or consistent.
It just is. 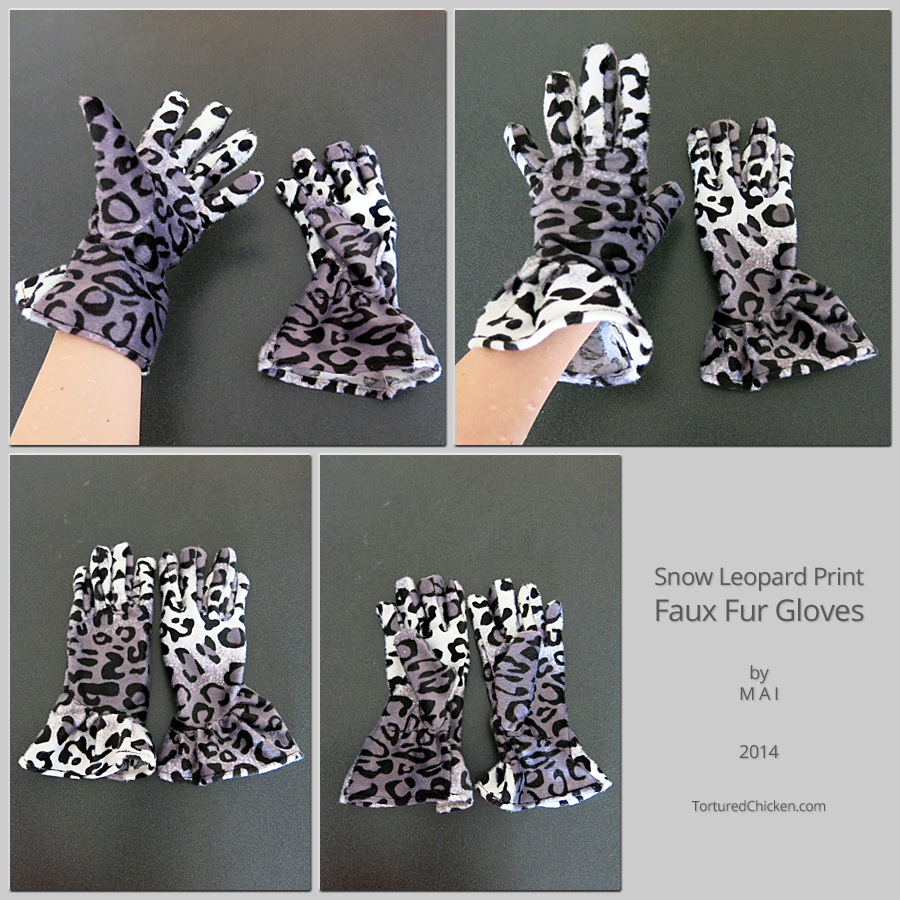 Finished, and not an injury in sight!

In the end, I got a useful addition to my craft and my mother got her pair of apostrophe pelt gloves. In a stylish snow-leopard colour-scheme no less!

Ps. How many apostrophes have I misused this entry? Seriously, I’m asking. Do I contribute to the problem in a liberal and irresponsible way?!