What goes off, my dudes?

The blog and the comic were both down for at least 4 days a couple weeks back, it may have been longer but I was out of town and not really paying attention. The short end of it is that the servers decided they wanted to fight WordPress. Then, once the sites were back up, I still couldn’t access them for administrative purposes because the servers decided that they also wanted to fight me.

We’ve since made amends and things are more or less back in order for now.

On a related note: the issue with image scaling and smartphones has finally been rectified in a manner which neither involved removing size dimensions nor adding multiple possibilities, hooray! It was as simple as specifying a “maximum height”, so as it automatically scales the width, the height remains in the correct proportion.

That explanation may or may not make any actual sense? 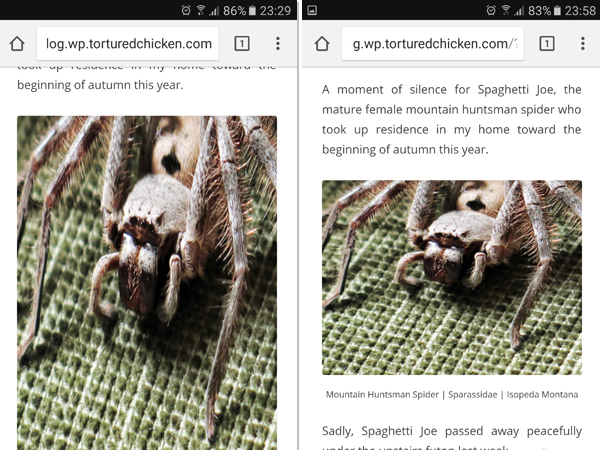 In any case, here is a before and after as demonstrated on my obsolete second-hand* Samsung S… something… 6, maybe?

Now watch as it takes me a further 15 years to manually apply this across the entire blog and comic, finally achieving completion in a time when smartphone technology has become obsolete and we all have hologram chips implanted directly into our eyeballs instead.

Currently I am also in the process of rebuilding the main site to be more responsive for mobile and tablet devices, but we’ll see how that goes.
Stay tuned for updates, I guess?
Or don’t.

*At the beginning of the year I almost got a new phone, but the Note was the only model with a stylus and the salesman was all “you can’t have one, they were recalled due to explosions” as if that was a bad thing? Like, no, you don’t understand, I 25% want a stylus and 75% want an explosion, please don’t make assumptions about my sense of self-preservation.