Recently I applied as a cadaver donor. You can read all about that over here.

From there I’ve been looking into which body parts can be legally harvested while I’m still alive. A kidney is the obvious first choice with half my liver coming in a close second, but it turns out these things are rather… complicated, so I toned it the hell down and, realising:

Turned my attention instead to blood donation. 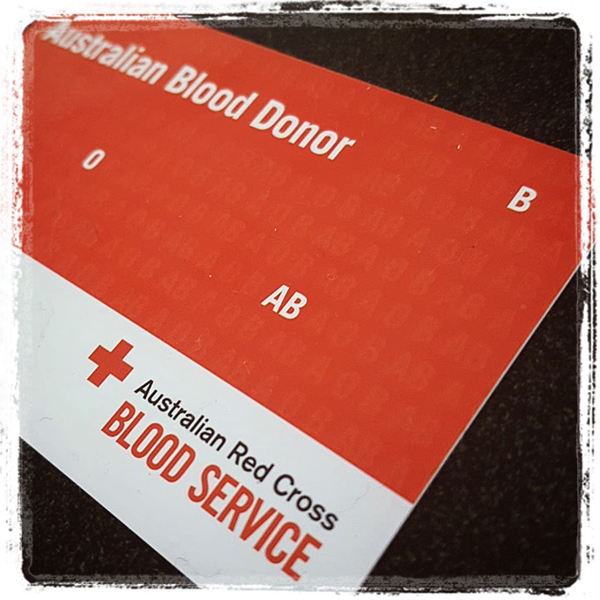 The offering has been accepted.

After receiving the go-ahead from relevant medical professionals and blood tests it was time to get on with it.

The booking and screening processes are straightforward and can be completed through the Australian Red Cross Blood Service website (or, presumably, a similar system if you are in a different country).

Easy as, right? Good timing too, I skipped out on flu-season which was apparently pretty bad this year causing many donors to postpone their appointments due to illness and drastically limiting an already limited blood-supply. Too bad I don’t have that prised O negative.

Being that the nearest collection centre is practically around the corner I figured I’d just walk my awkward ass down there, bleed from one of the numerous veins pathologists frequently salivate over, eat all their potato crisps, drag myself home and spend the rest of the day napping on the couch to the soothing sound of Yu-Gi-Oh reruns. 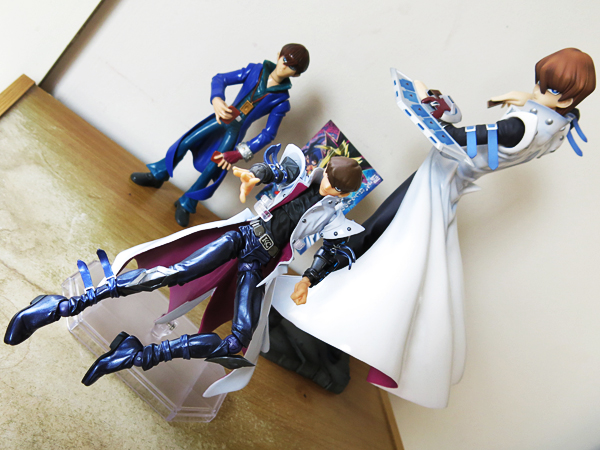 I came for Yugi’s hair, but I stayed for Kaiba’s legs.

Now, please keep in mind that although the donation needles are fucking massive, I am not particularly squeamish and will absolutely hold your hand if you need a moral support when obtaining body modifications or medical tests. When I stand up too quickly however, especially when it is warm, I do get a little light-headed. But it was a cold day so didn’t really occur to me as relevant. This will be important later.

Important now, even, being that the fainting risk, however small I’d initially perceived it to be, was a factor in the decision to not drive that day.

Once there I drank a tonne of water, filled in the necessary paperwork, went over my medical history, had heart rate, blood pressure and haemoglobin checked to earn the required approval, and was eventually hooked up to the biggest goddamn needle I’ve ever seen in my short pathetic life. Seriously, what the hell are those things, like, 12 gauge?! 10, even? Considering how much blood they take it makes sense, an unobstructed flow is needed, so I don’t know why I was surprised. Guess I just expected it to be more like the ones used for blood tests than the ones from my hyper masochistic BDSM fantasies? 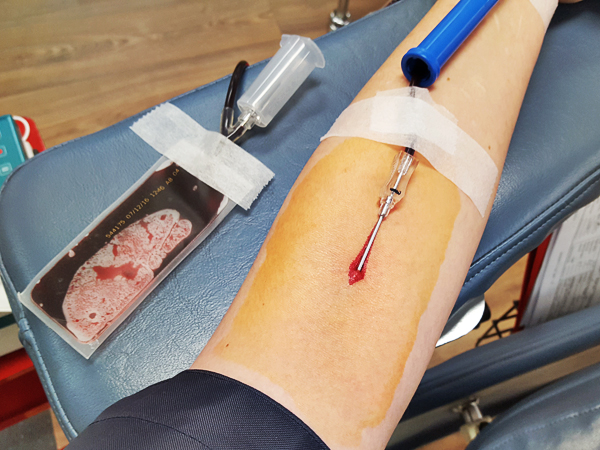 Find me bleeding out on a broken gurney in a badly framed amateur snuff film.

Settled back in the chair with a squeeze toy to occupy the bleeding arm I sent gratuitous closeup photos of that fucking huge needle sticking out of my vein to a decidedly unimpressed Tech-Support because what else are instant messengers and camera phones for, y’know? And the procedure itself went pretty smoothly. 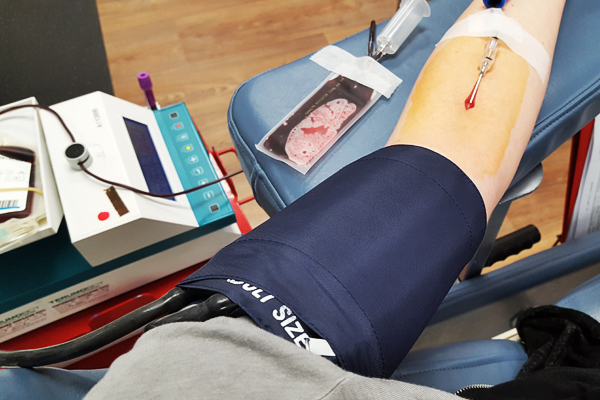 My brain: “What if the needle is so big it pierces right through your vein to the other side and nobody notices and your arm continuously bleeds internally forever and you die?”

After about 10 minutes the little machine said beep and a nurse popped over to unhook me. Bled out like a champ, yo!

They sat me back up and as I held a gauze patch over the puncture was feeling a little light headed, but figured it’d pass since I’d only just sat up and is a somewhat normal occurrence for me.

Unfortunately, holding the gauze was becoming decidedly more strenuous than realistically necessary so I casually mentioned: “Actually I am feeling a little bit dizzy now.” At which point I’m not saying I passed the fuck out but only on a technicality in that I managed to not lose consciousness; likely thanks to the quick work of a small army of appropriately trained staff who laid me right the fuck back down.

Boy did my blood pressure sure crash!

Pr0 tip: If you get the dizzies when standing, warn the staff beforehand so they don’t sit you up too quick- even if it is a cold day.

Didn’t see the first reading they took, but the second, after I’d been laying down for about 5 minutes or so and had the arm sufficiently bandaged, was 90/60. To put that into perspective, I’ve actually been tracking my blood pressure and heart rate daily for about a year now, and generally my blood pressure sits somewhere between 110-120/70-80. 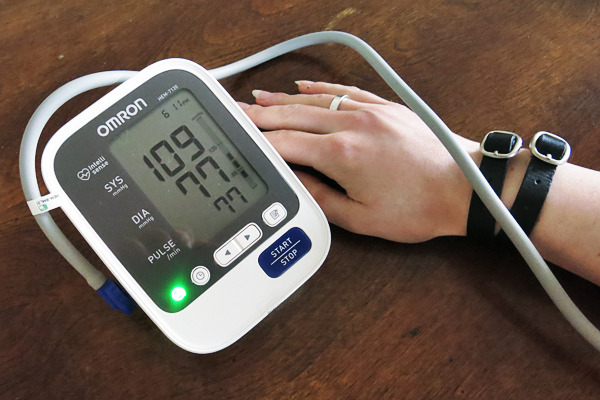 Here’s one I prepared earlier.

Blood pressure was taken about every 5-10 minutes to make sure it was going back up and staying there while I was sat upright much more slowly and fed about a litre of Gatorade. Once the staff were satisfied that my blood pressure was stable I was allowed to walk to the refreshments and feast on the promised potato crisps. (100% worth it.) 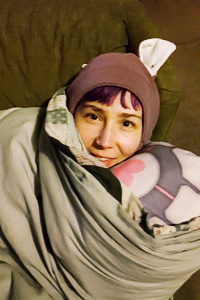 This is my natural habitat.

It was suggested I should call a taxi or otherwise have somebody retrieve me, but I was feeling pretty solid after loafing about the place for an hour and it was still cold out so I opted to navigate public transport, keeping Tech-Support updated until I was safely tucked in on the couch with my favourite card-game based anime. Where I rightfully belong.

Round 2 is booked in already. More importantly, I’m also going to ask about getting swabbed for potential bone marrow donation, since apparently that’s also a thing which is relatively straight-forward. Who knew?! Will keep y’all posted on how that goes.

Just one more note before I fuck off: iron levels. Low iron is relatively common. It is something I have been tested for on a number of occasions, but is not something I have or have ever had. Though it occasionally sits toward the lower end of what is considered acceptable. For this reason I was advised to take a liquid iron supplement for a few days before and after donating blood. Makes sense. 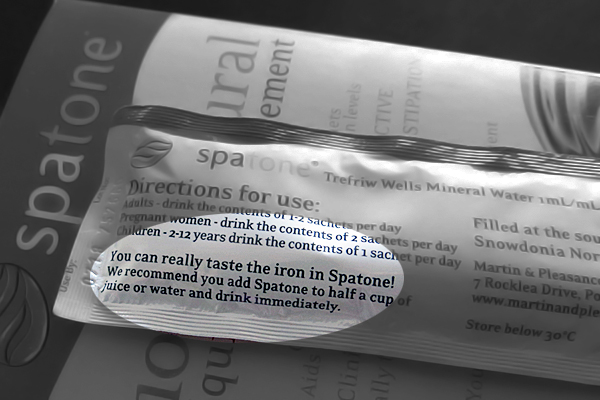 Yes.
Yes you can.
And that is not a good thing.

Coming from somebody who routinely eats raw meat and is A-ok with the taste of blood; please add this shit to juice or something to mask the flavour unless you’re cool with a tall refreshing glass of rusty nails.

What has been tasted cannot be untasted.