Spats (or spatterdashes) are a type of footwear which is not unpopular in the steampunk scene, but otherwise went out of fashion in the early 20th century for reasons which are currently beyond me, I mean, they serve a practical purpose, y’know? Keeps the mud off your shoes. Not that I go outside frequently enough to get muddy shoes in the first place but I think we can all agree that it’s fun to accessorise regardless.

All us overdressed villains, that is!

Being largely unsure where to begin (having never made spats before), I used a combination of clingfilm and duct-tape to create a basic pattern directly from a pair of boots which are the same size and brand as the shoes designated for Odlaw. 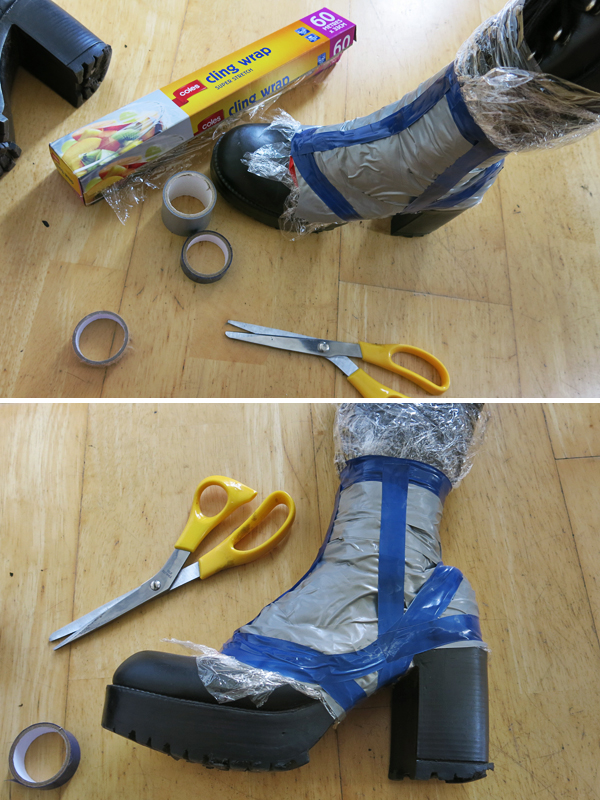 Being the same brand (ROC) and size, the two pairs have similar basic proportions.

Yeah dude, we’re picking up where we left off from the badly crocheted hat four months ago. What do I even do with my time any more? Well, anyways, if you need a refresh: last New Year was Where’s Wally themed, so naturally I slapped on a fake moustache for Odlaw.

Back to the awkwardly paraphilic situation my ROC boots found themselves in; the tape-and-clingfilm was subsequently cut into the desired pieces, traced out onto pattern paper, and seam allowances were added. 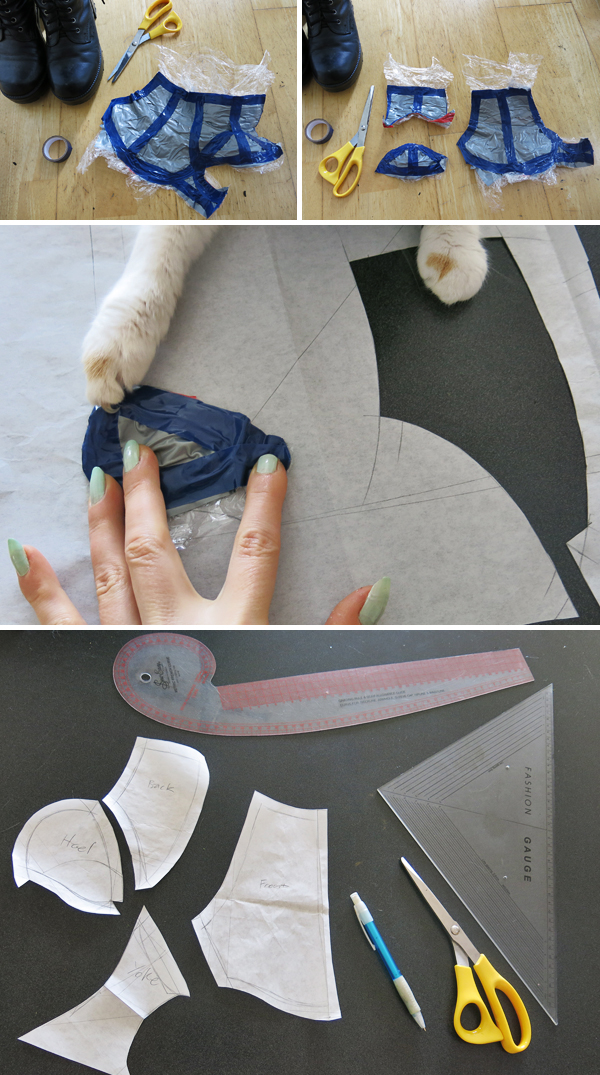 None of which would have been at all possible without the valued input of a qualified Helpercat™.

The initial pattern was then cut from yellow cotton which may or may not have been a gently used bed sheet but you’ll never get the truth from me. Especially the truth about how I wasn’t initially planning to mock these up but the fit over the shoes proved inadequate so I had to pretend like that was the plan all along. 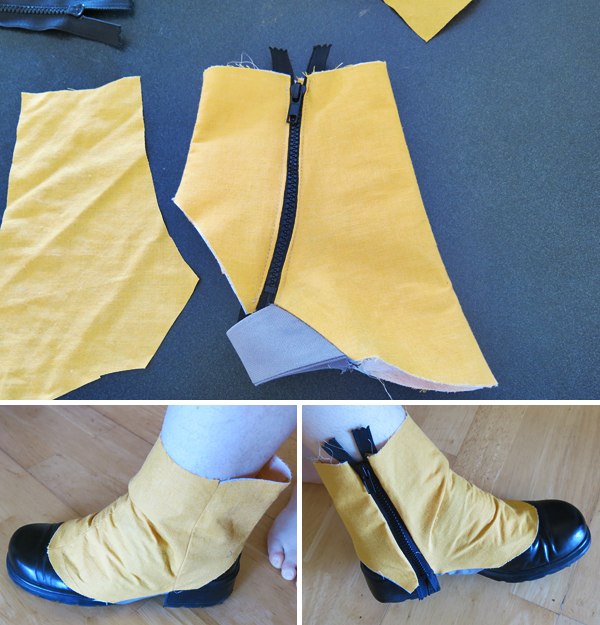 This is absolutely a toile and was definitely 100% planned as such.

The zippers were salvaged from the toiles after several adjustments were made to the shape and fit of the paper patterns, and then I was able to begin constructing the final product.

While the outer fabric was already established as being the yellow cotton, I briefly pretended like there were three options for the satin lining. 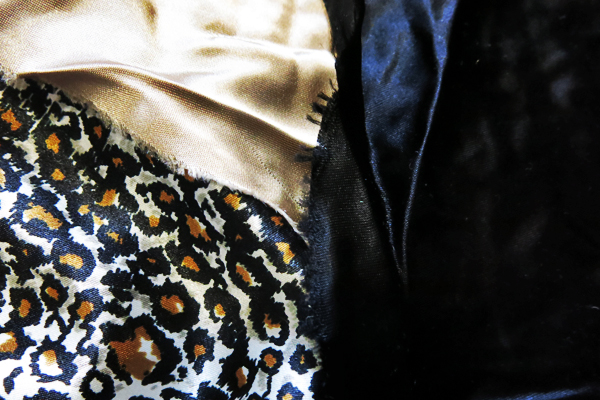 Satin is preferred for linings as it is kind of “slippery” so easier to put on and remove than more coarse fabrics.

While the straps to hold under the shoes (stirrups?) were a navy blue cotton with black satin lining, the upper lining was never not going to be of that hideous leopard print I apparently have an infinite supply of. 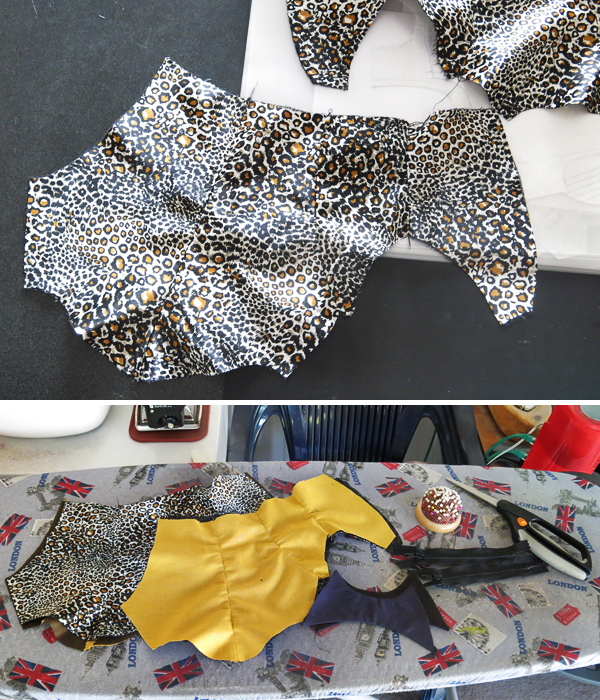 The interfacing was a woven, black, mid-weight fusing.

The outers and linings were each constructed separately, leaving the inner ankles open where the zippers were inserted on the outers.

Once the zippers were comfortably situated the linings could be inserted at the ankles, leaving the lower edges open for the stirrups. 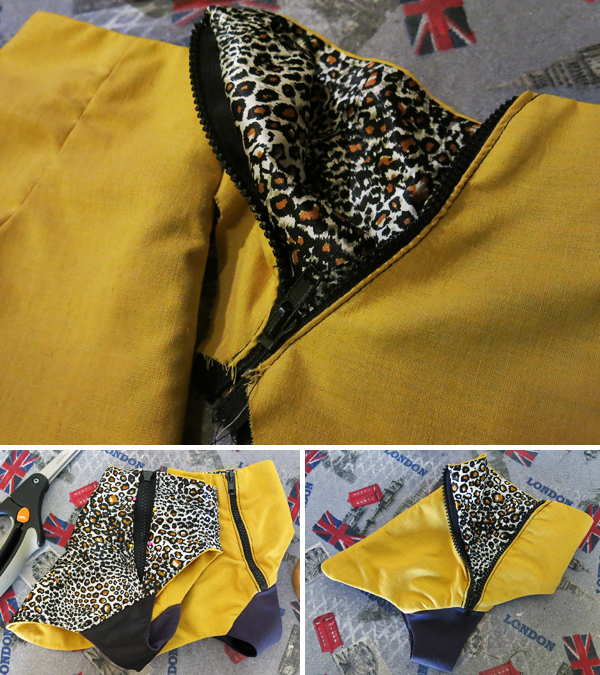 Top-stitched in black because I guess I got bored of re-threading the machine.

Stirrups were inserted into the arches and the lower edges were then bagged out.

The leopard print is our little secret. Wink.

The linings had been left loose at the zippers in order to get inside with the machine and bag everything out which was tedious, but faster than going in by hand. Although it did mean finishing the lining along the zipper by hand, but hey, you make your compromises and I’ll make mine. 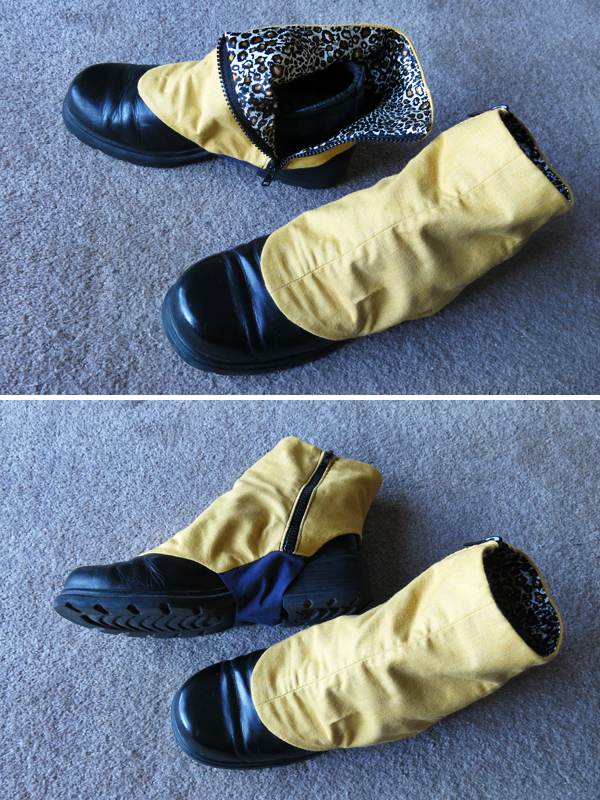 Eventually they were complete.

At the end of the day (or month, as the case may have been) they came together well; fitting comfortably over the shoes and my ankles. 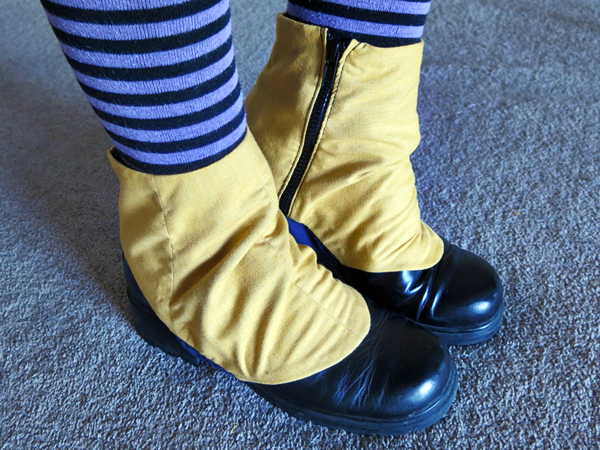 As a parting gift, for making it down this far, a comparison of the mangled socks which were hastily strapped to my shoes the first time I decided to go full Odlaw because apparently those are a thing I’ve held on to: 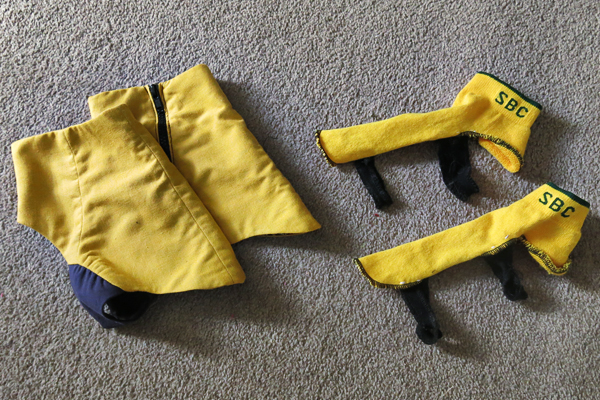 A fine example of my most powerful ability: doing the bare minimum.

Catch y’all nerds in like… 46 years or whenever the fuck I finally get my shit together long enough to finish this epic trilogy of breaking down one of the most basic costumes in existence.