Time to finish this months overdue trilogy of trouble. Why has it taken so long? Well friends, you see, I have zero time management skills and even less motivation!

Despite originally being a British publication, “Odlaw” is a reversal of “Waldo” which is Wally’s localised name for the US market. I guess because “Odlaw” sounds more like a name than “Yllaw”? … Unless you’re Welsh, eh, eh? Just kidding, Yllaw is way too short to be a Welsh name.

Initially, with the hat and spats taking priority, my plan was to shove some shoulder pads in the top and call it a day, but… He was looking more than a little bit ratty so was entirely dismantled instead. 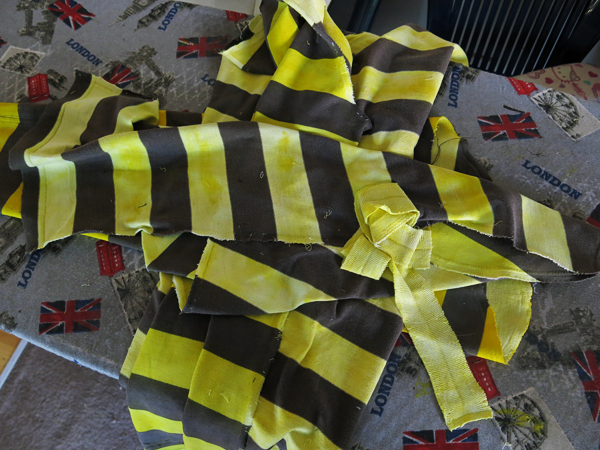 Also because I was trying to distract myself from the general futility of being alive.

The top had come from an opp-shop and was originally black and white. To paint it up I simply covered the black sections with masking tape and had at the white using the usual sorts of dollar-store acrylics I tend to favour. 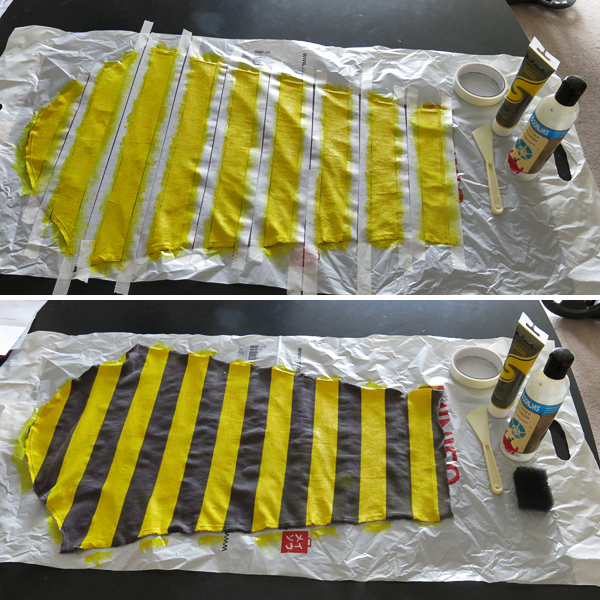 Reason 837 why I shouldn’t be allowed in the kitchen.

There’s this magical textile medium which can be mixed with acrylics to get them to adhere properly to fabrics. A little bit goes a long way so I’d been rationing the same bottle for several years and hadn’t stocked up in a while. Combined with the cheapest paint money can buy? Forking out for actual fabric paints was an option I felt no longer applied.

Naturally, it had been long enough that the textile medium has, in fact, been discontinued. Despite upending every craft and fabric store this side of the CBD I was unable to locate even a remotely similar product from a different brand.

Yes. Your anxiety is compromising your immune system.”– That… can happen?

To be fair, considering the longevity of a single bottle, it probably didn’t have much of a profit margin in terms of repeat sales. Brand loyalty means nothing in the face of rampant capitalism. But that’s a rant for another day.

So I had to fork out for actual fabric paint which was honestly priced so far out of my budget I may have cried a little bit but last December was… there were some things going on which aren’t relevant here but let’s just say the crying may not have been entirely paint related. 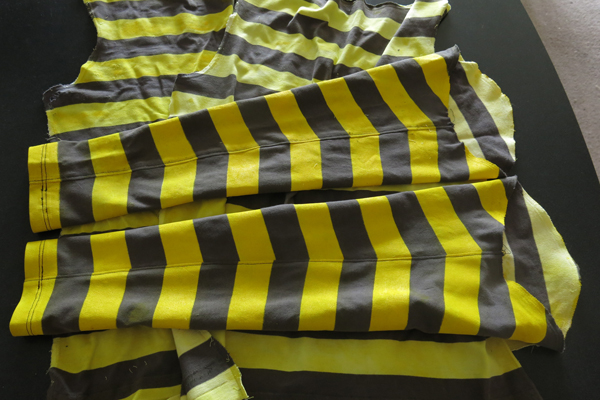 If you don’t ugly-cry into it at least once, then is it really cosplay at all?

But yeah, I cut the fabric paint with dollar store acrylics like the stingiest crack dealer ever because there was no way I could afford TWO WHOLE TUBE?! What the hell kind of millionaire do you financial sadists take me for?!
Also because the body colour preferably needed to match the sleeves which wasn’t going to happen otherwise. 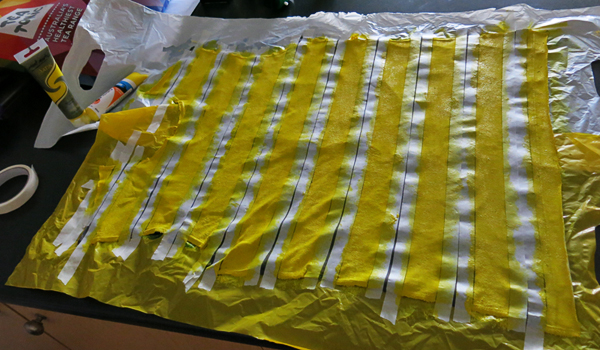 What matters is that I did my best under the circumstances regardless of whether or not it was objectively good enough. 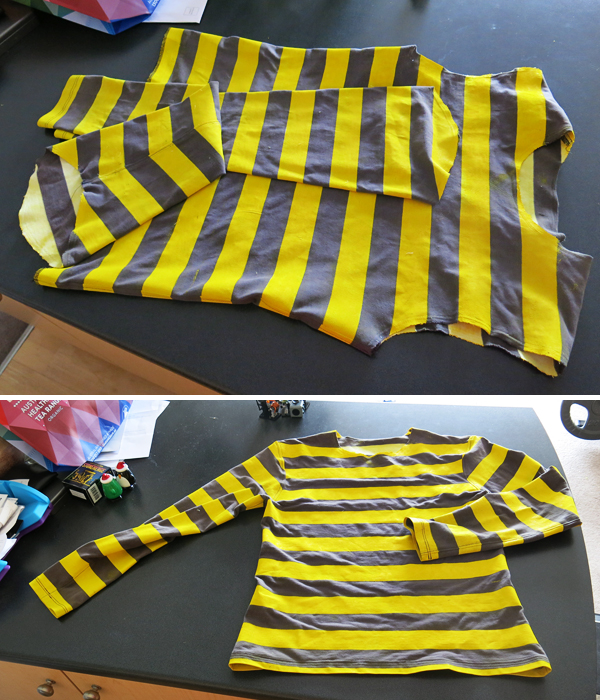 A disaster in colour-matching.

Once the paint finally dried he was ironed, stitched back together, and pressed.

The neckline was finished with some gold ribbing, then the shoulder pads pinned and hand-stitched in place to compensate for my shitty posture. 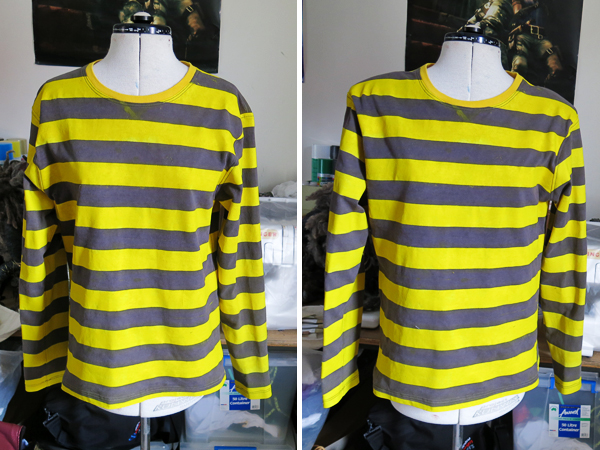 Nobody is fooled, but several people enjoyed the texture.

Lastly he was washed, dried and given one more final press before the party. In general it isn’t a bad idea to wash painted garments both before and after painting as this will remove any residue and help prevent excess paint from rubbing off onto other things when being worn.

Ultimately the paint was still a little patchy from the initial rush job completed several years ago now, since at that point in time I hadn’t expected him to be more than a singular drunken shenanigan. If he makes a comeback for a future event? It’ll no doubt be time to construct a nice turtleneck for him without any tears or hastily applied paint. 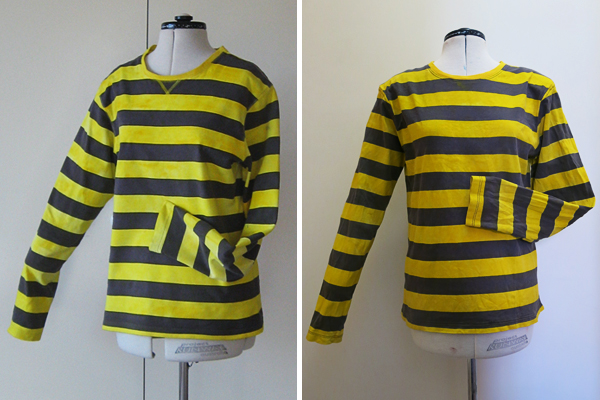 But for now? Rest.

Between the wig, fake moustache, and glasses it’s not like my face was really visible at all, but I put full makeup on anyway. 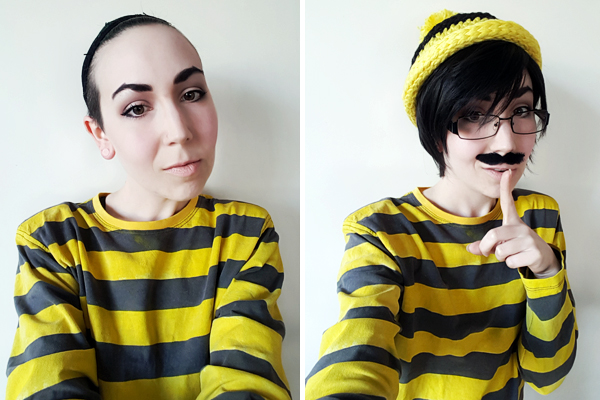 Odlaw’s glasses are often depicted tinted blue, and previously I’d glued blue plastic into a re-purposed pair of 3D glasses from the cinema, but in this case I opted for being able to see and just rolled with my regular non-tinted prescription. 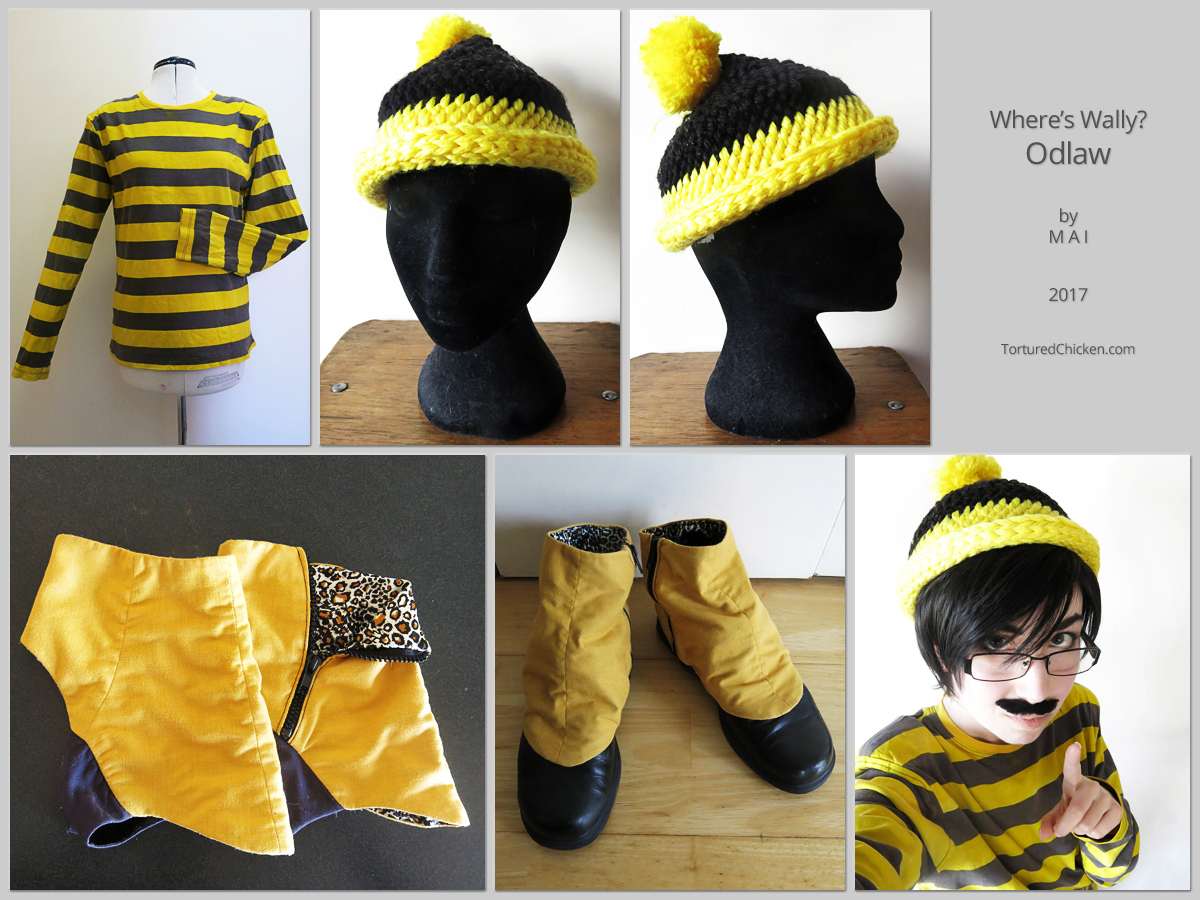 It is never entirely established exactly what Odlaw actually does that makes him “evil” and honestly, speaking as an Obvious Villain™ myself, that is some downright relatable content right there.

Now, Where’s Wally? parties are, as a rule, objectively great. People are always so ready to put their stripes on and Sabi, whose family were the evening’s hosts, had the coolest Wenda dress I’ve ever seen in my life?! Then, well, one thing led to another and a couple of weeks later she was handing me this super cool Odlaw top from the same range?! 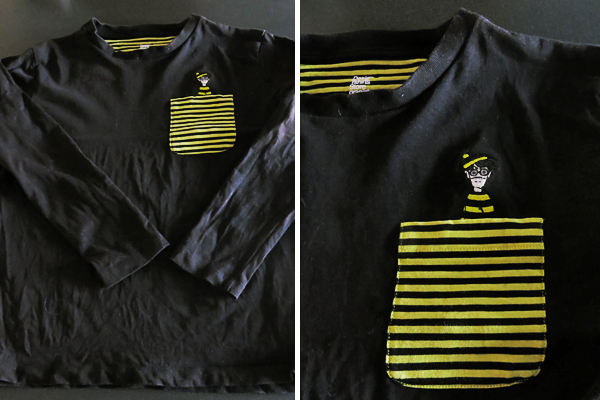 Look at this sneaky friend lurking in my pocket!

Which is obviously incredibly rad as is but! You see him in the pocket an figure it is just his upper torso poking out of the pocket, except…?! He goes the whole way down! 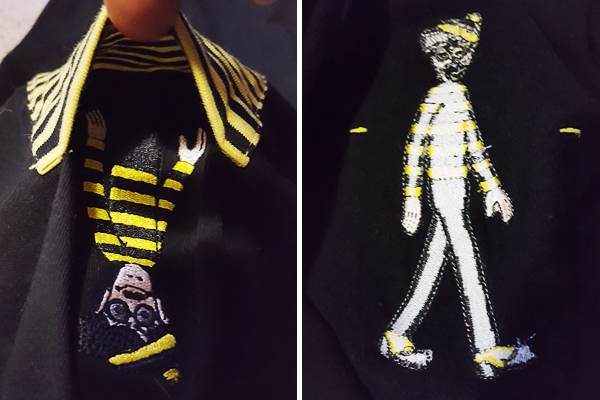 Right down to his shoes!

The unnecessary level of effort? It soothes my immunocompromising anxiety.