Despite developing shingles on top of my regularly scheduled December meltdown, my barely functional ass sat itself down having decided it was as good a time as any to make a real actual attempt at learning to crochet properly despite all previous yarn-craft efforts being catastrophic failures. 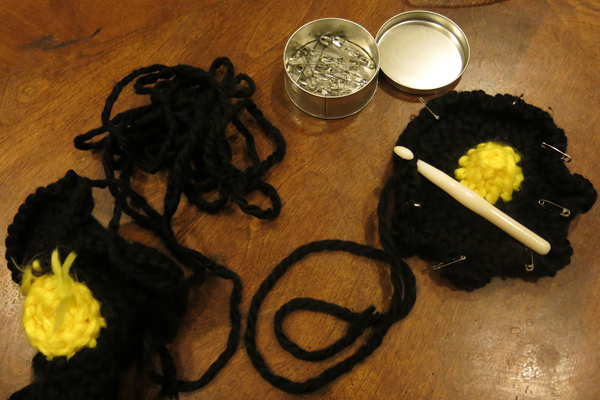 The previous failure being crocheted directly into the next as some kind of fucked up hat-based Ouroboros.

Why? To distract from the ever present suicidal ideation of course! Because this year the theme for Sabi’s family New Year party was Where’s Wally? and it was absolutely time to drag Odlaw back out but man… he sure hadn’t seen the light of day since 2011 and it showed.

In fact, he wasn’t even good at the time; as supported by the following evidence: 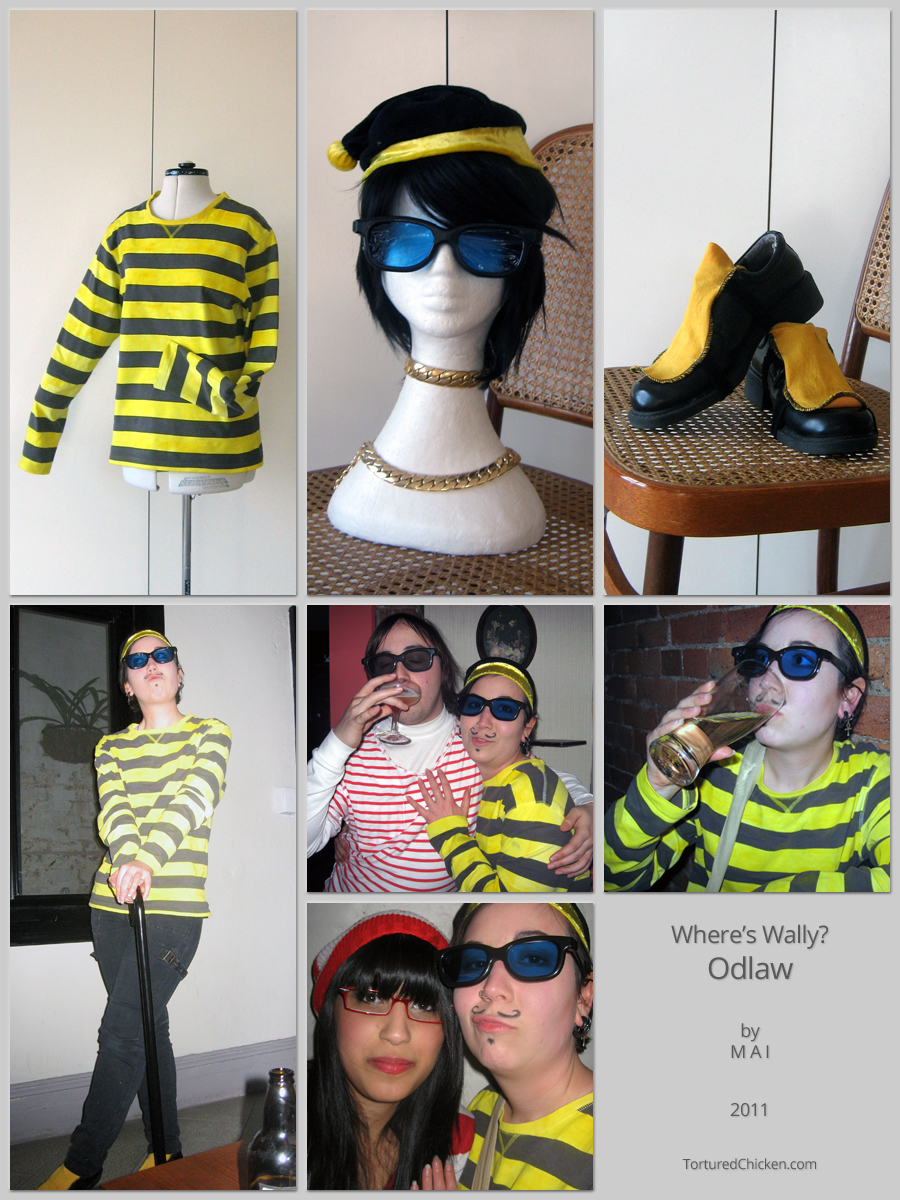 Wear costumes and get drunk.

The “pompom” on the hat was… it was just a foam ball wrapped in crushed velvet.
As for the moustache? Eyeliner. 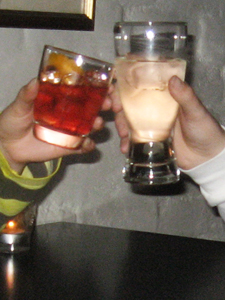 It was bitter and I liked it.

Fun party though. Stole a walking cane. Got really drunk. Bartender even made a special drink when Sabi decided to order me something “fit for a villain.”

Thing was it happened the same weekend as Manifest that year, when I’d been occupied by Team Fortress 2 and was absolutely going to nail the silhouette for that Medic’s lab coat. Along with managing clothing for a Spy and a Heavy. As well as version 1 of my Commander Keen. Plus a casual Shinji Ikari. Were the Magicka robes for that weekend too? Was that why Odlaw’s hat incorporated crushed velvet?! Basically, Odlaw was not as high on the priorities as the TF2 group or young Mr. Blaze and at the time I was okay with that.

But in 2017? Strapping a mangled pair of socks over some shoes and calling them spats just wasn’t going to fly.

Also Sabi and the fam were kind of inspiring and it would be a lie to say the adorable crochet projects they’ve produced over the years weren’t directly responsible in prompting me to give it a go. 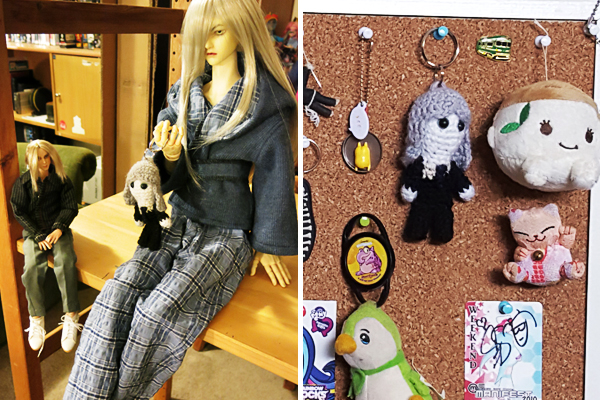 Just look at this tiny Khye Sabi made for me in 2015! He lives on the cork-board when he’s not clipped to my bag for adventures.

So off I went to the dollar store and stocked up on necessary supplies, which included but were not limited to: 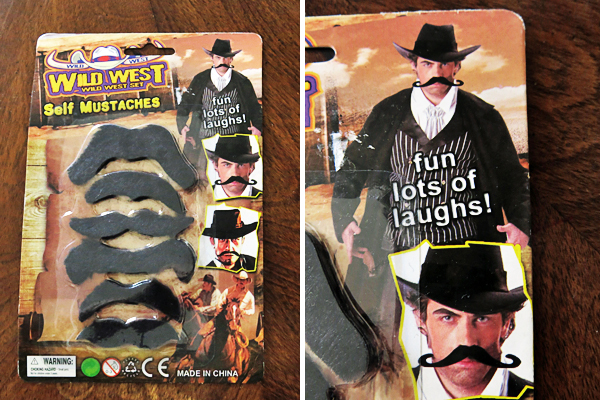 This packaging is a straightup masterpiece and I will absolutely fight anybody who suggests otherwise.

How much yarn? Fuck if I know. How long is a piece of string? Literally. It was a lot. There were a lot of failures. Geometry is one thing- I can draft a hood to fit over horns– but apparently I just can’t fucking count. Maybe my year 9 maths teacher was right all along?

When it comes to picking up a new skill I need visuals. Visuals are very useful for making knots.

Tragically, making knots is the easy part; much of crochet is in keeping track of them. 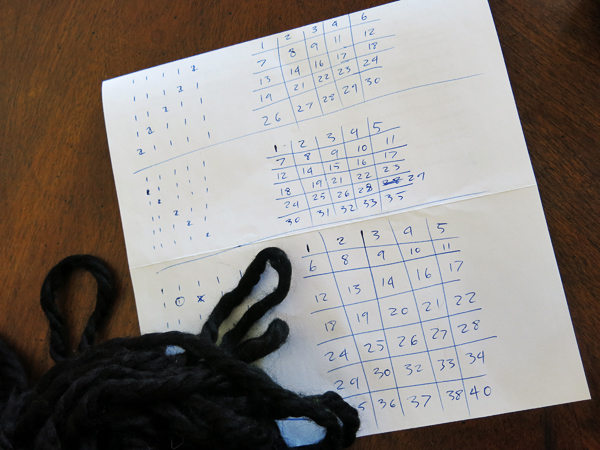 So that’s it. That’s the pattern. A series of haphazardly scrawled numbered grids and we aren’t going to talk about how long it took to realise that Excel truly is the only logical way to make a knitted pattern.

Each pair of grids equals one row of crochet. The first grid is a binary indicating if it is one stitch or two, while the second tallies the total number of stitches to a row. In conjunction with the grids a series of safety pins were used to mark every 5 or 10 knots as I worked in order to track the total (each row was a multiple of 5 because of reasons). Being a circle; the start/end point was marked with a significantly larger pin so I didn’t forget which one it was. 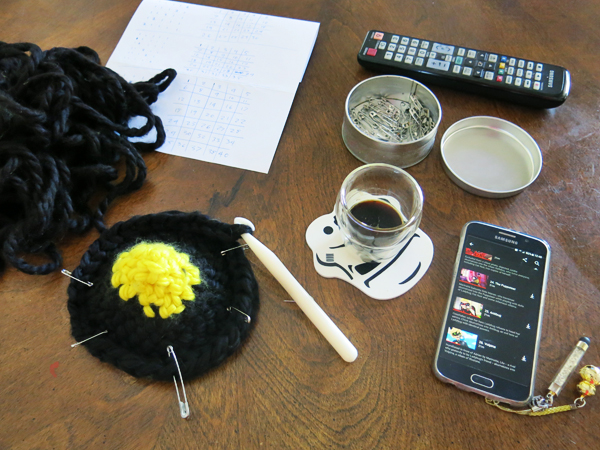 The yellow tip makes it look like a funky fashion nipple.

With the crochet done and RSI flaring up, it was time to make a pom-pom, acknowledge that the hat, while functional, was ultimately inadequate, and start again armed with a better understanding of the relationship between crochet, grids, and my useless brain. 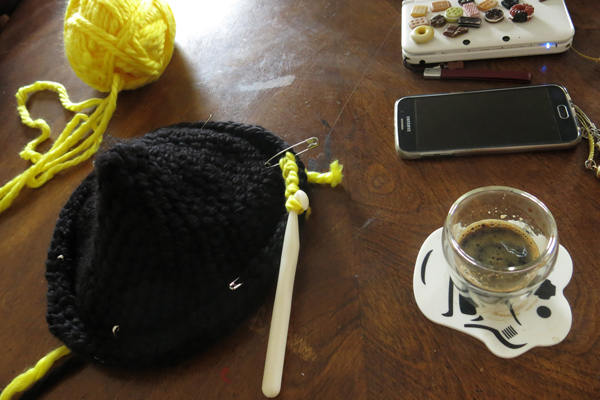 No yellow areola this time.

From there it was just a matter of sizing it to fit my trusty duct-tape bust, Spanky Hank. 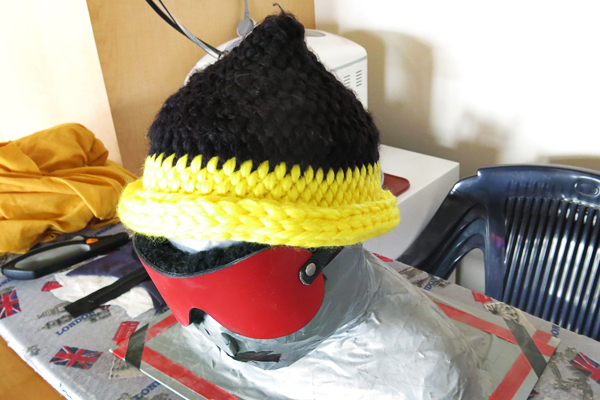 For the… uh… practice hat I’d measured the pompom on my hand, which left it a little sparse and uneven. Don’t rush, kiddos. For the final I used cardboard circles instead. 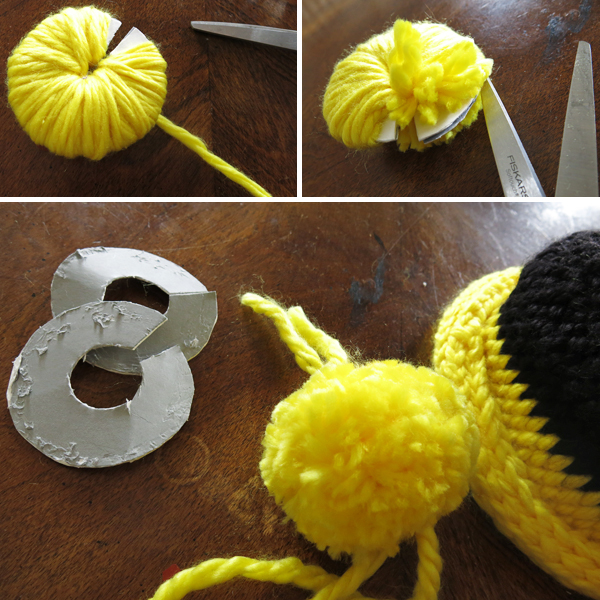 You make two cardboard circles with the centres removed and a slot cut in, wrap the yarn around them however thick you like, lever some scissors between the circles to cut the yarn, then tie them off tightly between the cardboard before removing it. Adding a little fabric glue to the centre can help reinforce it too. 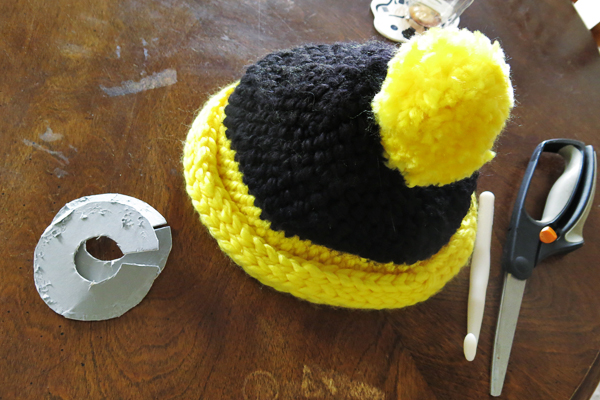 It was tied off twice, so there were four ends to secure onto the beanie.

Now the pompom was desirably plush it was stitched securely to the tip of the beanie; the ends of the yarn used to tie it off had been left long for exactly that purpose (but, again, a small blob of fabric glue can be used to reinforce it). 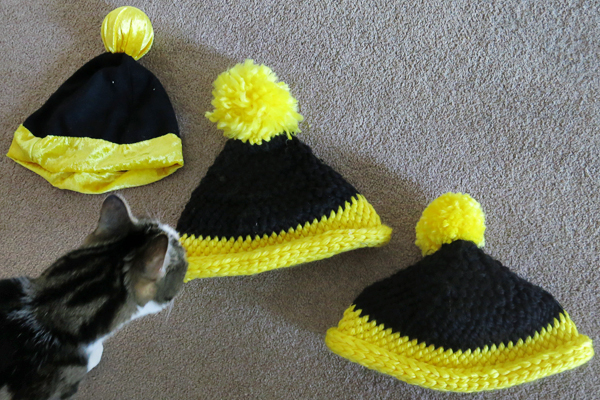 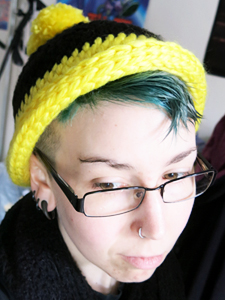 The hem of final beanie was finished with a row of stitches crocheted in the opposite direction to the rest of the hat, with the loose end stitched in and just kind of tied off inside the hat.

Please don’t pull on the loose ends or the entire thing unravels and my head falls off.

Also, every time I write “crochet” my brain insists it should instead be “crotchet” but I guess that would only apply to knitted merkins am I right?!

Tune in next time for spats that are not made out of second-hand socks (but may instead be composed of a gently used bedsheet).