Currently living my best millennial life by having two jobs but still being below the poverty line while wealthy politicians berate people like me for:

No, I’m not eligible for government benefits, please stop asking I’d rather be homeless anyway, it’s not like I’ve never made a habit of sleeping in a car before. Besides, have you checked the suicide rates for Centrelink users recently? Yeah, rather not risk asking the Department Of Dehumanising Services for support, thanks.

No I don’t have the time (or energy) to wrangle a third job in there, please consider taking me out back to be involuntarily euthanized if this genuinely seems like a reasonable suggestion to be making, it would be the more humane option.

Increased human interactions due to the nature of my current situation has unfortunately meant an uncomfortable proximity to transphobia and homophobia; something which was largely avoidable prior to leaving the house.

Mai sure does look incredibly heterosexual today!”– Nobody, ever.

Evidently, my appearance doesn’t exactly scream “heterosexual”- but explaining to somebody who probably wants to murder you in the parking lot that you’re a closeted trans dude rather than a soft-butch lesbian is probably a good way to definitely get murdered in the parking lot. Or public restroom, maybe, when somebody decides you’re entirely too ambiguous to be utilising the binary facilities.

Catch me with my brains dashed out across the tiled basin of a shopping centre restroom at 3pm on a weekday because I had the audacity to wash my hands.

(Not that I live with crippling anxiety or anything.)

On a more positive note, I do appreciate when people ask for my pronouns and make the effort to actually use them; ya boi didn’t struggle into his binder this morning to be “Miss”– or worse- “That Lady”. 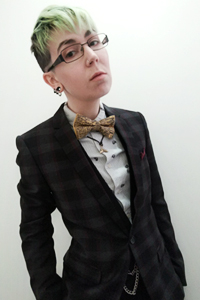 “Are you a boy or are you a girl?”
Calm down Professor Oak.

One of the more baffling human observations I’ve made recently is in regards to the way people insist on gendering inanimate objects. The more I encounter it, the more I realise there is absolutely zero consistency to it?!

Back to back I’ll have somebody insist to me that the green ocean fabrics are far too girly for a boy and they only want the blue ones, thank-you-very-much, while the very next person wants to know why all the ocean prints are so masculine and if there is anything more feminine, you know, because it’s for a girl and these children absolutely must be colour-coded so that strangers can make assumptions regarding the shape of their genitalia?

Like??? My dudes… I think… I think that turtles are for everybody? Or at least, that there is not a gender prerequisite for liking them? Maybe just… just try asking the child what sorts of animals and colours they prefer, you know? If they’re too young to have an opinion then you’re probably overthinking it.

Then again, neither of us is even sure if I’m a boy or a girl, so you’ve definitely come to the wrong person.