So, like…
I’m not saying tapering off pregabalin has cured my depression… 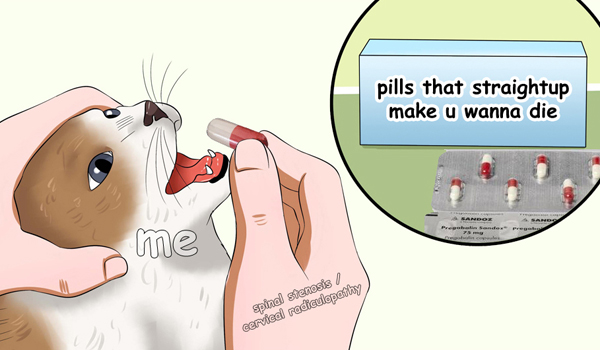 But it is entirely within the realms of possibility that I may have been experiencing one or two Side Effects™.

Although I was aware the medication was affecting my short-term memory, it hadn’t necessarily occurred to me, between Hobes’ cancer and the fatigue of existing under capitalism throughout a literal pandemic, that maybe crying in the car to and from work every single day is not necessarily a standard human behaviour. 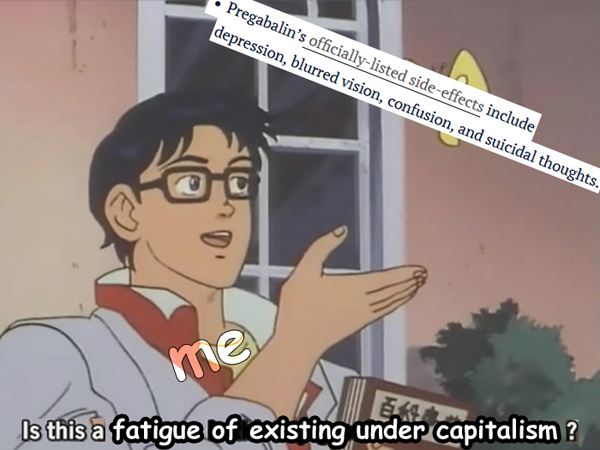 Is this a fatigue of existing under capitalism?

It could also stand to be emphasized that pregabalin did, in fact, do what it was supposed to do (and many, if not most, people don’t experience what I experienced, hence why it was prescribed in the first place).
Not only did my pain improve significantly; it also drastically reduced my insomnia. Instead of being unable to sleep, I was routinely sleeping for 12-15 hours at a time, while still managing to feel constantly exhausted- just not in the fun: “I’ve been awake for 3 consecutive days and am ready to F I G H T” way that I usually am.

Still feeling a little unsure about what my feelings might’ve been over the lockdowns if I wasn’t using everything that happened as a viable explanation for craving death, but at least COVID-19 and Scott Morrison didn’t strike anybody as particularly implausible reasons for openly expressing an interest in retiring from immortality. 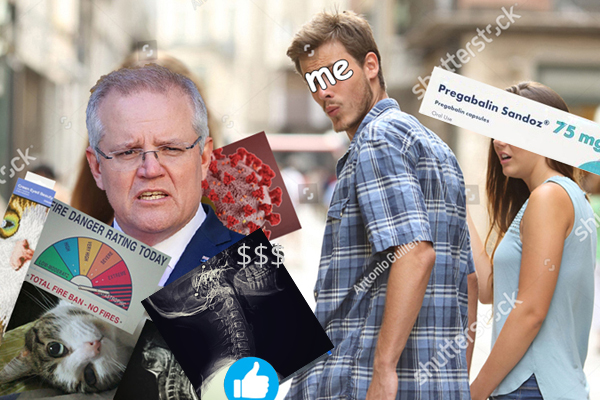 May not have disengaged so hard from Facebook products if I didn’t decide centralised social-media was a cause for the depression, but certainly don’t regret it and currently have no intentions to reengage with them.
Even Google is on thin fucking ice at this point. You used to be able to find interesting things on their search engine, now the first few pages are just a dick measuring contest of: “Who paid the most to be here?” And usually it’s Pinterest.

Currently my PC is a Mozilla Firefox/Duck Duck Go combo, but if you’re looking for an entirely more engaging search engine experience I’d strongly recommend Marginalia. If you’re searching without any specific goal in mind it’s pretty good fun, with a lot more text-heavy results- so no worry about being inundated with noisy, poorly executed video tutorials. 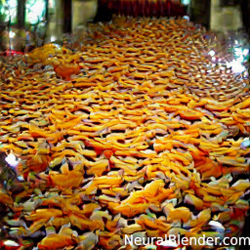 Only tangentally related, but in terms of killing time on the computer, I’ve also been really enjoying Neural Blender, a neural network which takes keywords and uses them to create images.

It has a very dream-like quality and can be utilised as a jumping off point for developing narrative scenery.
Or, in my case, an accurate way to depict how the paths swimming with goldfish appear in my dreams. Like, I was at Singapore airport one time in, what? 1991? And every single one of those enormous fancy goldfish has been living rent-free in my dreams ever since.

The most surreal part of all this, on being forced out of lockdown as we head into summer, with my initial pregabalin dosage step-down from 75mg to 50mg, was realising, about a week in, that I’m probably not going to have one of my Patented December Meltdowns© this year.

The full dosage was originally 150mg (2X 75mg capsules each day), but it made me lethargic to an unmanageable degree so I’d chosen to halve the dosage against medical advice after about a month or so. Though I’d wanted to stop taking it for a while, needing to find a new doctor complicated things a little bit and I ultimately decided to just finish out the 75mg prescription before letting the new GP know I did not intend to continue taking it.

Currently on the home stretch with 25mg every second day until the prescription runs out on the 3rd of January 2022, after which point I will no longer be taking any medications to manage the symptoms. The side-effects of both Diclofenac and Pregabalin were savage enough that it’s just not a risk I’m willing to take again- besides the obvious:
There is not a medication in existence which can actually fix the underlying problem.

What I actually need is to speak to a neurologist who can assess whether or not I am a suitable candidate for surgery to ease the pressure on the affected nerves.

Might look into physical therapy options again. Was seeing an osteopath for a while, but stopped due to a combination of pandemic lockdowns and financial inaccessibility. A big fear is progressive nerve damage ultimately leading to permanent paralysis; my ability to work relies largely on my hands after all, so it may be worth reassessing my budget if bodywork stands a chance of stalling the progression.

Stay safe out there and… I dunno, speak to a medical professional if something seems off?
The stark realities of physical deterioration notwithstanding, it’s definitely been a weird couple of years for just about everyone.