The blog entries have now been fully updated, all images should theoretically be back in correct functioning order now, along with broken links being redirected where possible, or otherwise removed.

Still a little bit of back end stuff to make this process easier should it happen again in the future, but I say that every time that’s something which literally only affects me.

Next task is updating older images in the gallery. It’s kind of a pain in the ass but hey, that’s life. So far all the photographs are done since they were the easy ones, the drawings are going to be a real time killer.

After that (assuming it actually gets done) everything should be pretty consistent in terms of identity.

IRL I’m coming to terms with the concept that maybe I like cyborg characters so much because as a trans dude so deep in the closet the moths are eating me, on top of chronic RSI laying waste to the right side of my body, the notion of after market modifications is very appealing. Let’s be real, if I could replace this useless meat prison with 200lbs of premium carbon fibre and chrome plated titanium with LED accents?! Sign me the the fuck up! Yes I’ll be an undocumented trial for the untested flamethrower prototype, my sense of self preservation is a hard zero and now I’m recyclable too. 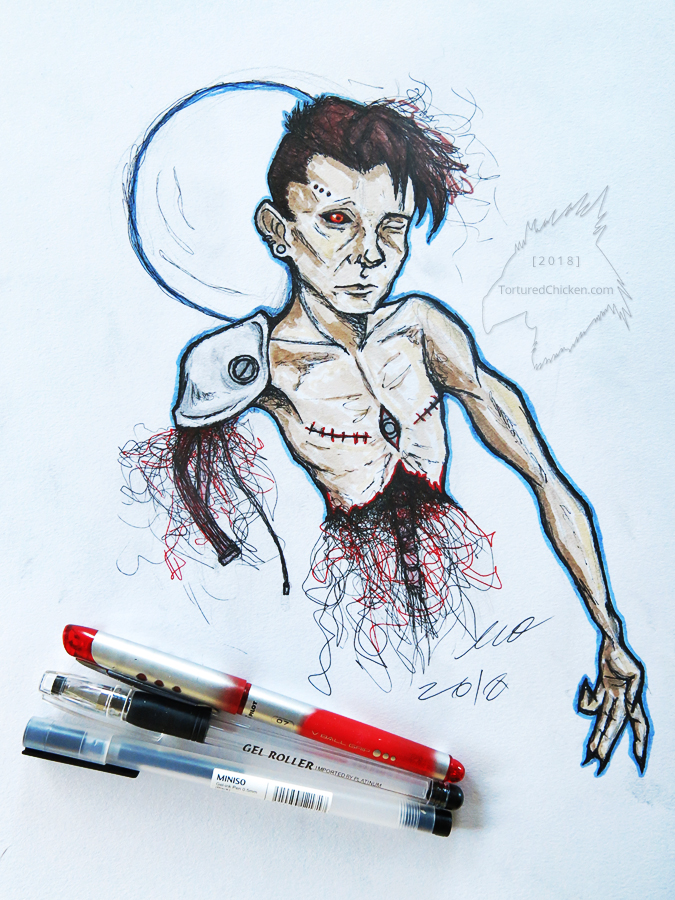 Rebuild yourself. Be the obsolete combat prototype of your own post apocalyptic wasteland.

Maybe if I manage to hold down a Real Job™ I’ll finally be able to organise HRT this year? Hit a boy up with your endocrinologist recommendations.

On and off I’ve been toying with the idea of putting advertising on the site, not that we get much traffic around these parts, but maybe it’d be able to pay for itself if that was a thing?
On the other hand, a big part of having my own website is that I can’t get banned from it, and advertisers can be squeamish, which they have every right to be- maintaining a brand identity is an integral part of their job, after all.

For me personally though, it means dissecting whether that’s something I actually want to implement, or if I’m feeling pressured to do it by the crushing sense of guilt associated with doing anything purely for its own sake (see: Fun). Much like my love of cosplay was detrimentally impacted by attempting to monetise it with the pursuit of freelancing, would my love of shitty websites be similarly lost to the needs of capitalism?

They say money can’t buy happiness, but the concept of happiness is unsustainable anyway. Financial security can buy stability; maybe you still have depression but at least you can afford the medical attention to address it without risking homelessness.

Am I too old for a sugar-daddy?