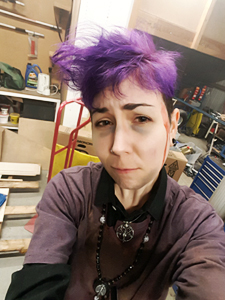 Casually bleeding from the face is genuinely a strong look for me.

Point is, the film which was filmed that night, along with behind the scenes footage, is now complete and viewable on the good old YouTube so… enjoy? Or don’t?

You’re your own person.

*Not her exact words.

Please go binge-watch this good free thing on the YouTube called Trying My Best by local comedy troupe Birthday Loyalty Club which I am shamelessly promoting because my incredibly handsome and talented co-pilot Sian (MaEmon) is involved:

Thank you that is all.