My favourite store in the world is Daiso.

Daiso is a Japanese chain of ¥100 stores (about $2.80 in AUD, apparently) which I adore due to all the obscenely cute shit they sell.

Let’s not be coy; I do adore most- if not all- dollar stores. Truthfully the really junky ones are often the most fun. The fascination is similar with opp-shops. What can I say? I love hoarding random shit that I have no logical use for under the vague pretence of sourcing costume supplies. 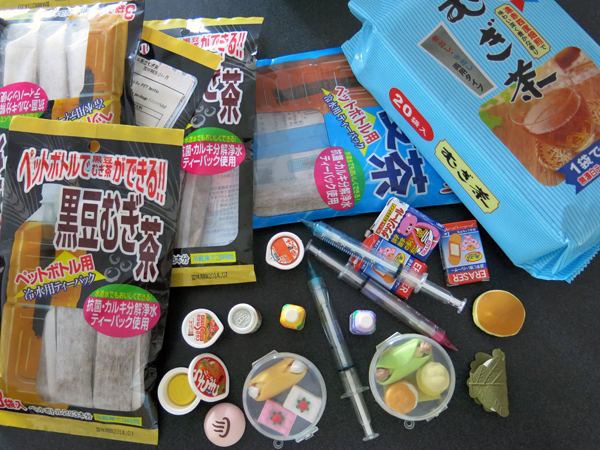 Also that barley and black soybean drink in the long teabags meant for bottles. That stuff is the shit, yo.

Recently I was having a ridiculous shopping date with two of my friends who I somehow managed to wrangle into a Daiso store. They were not prepared for what shenanigans ensued.
… I am yet to be forgiven.

Part of what shenanigans ensued was the discovery of my new favourite mug. 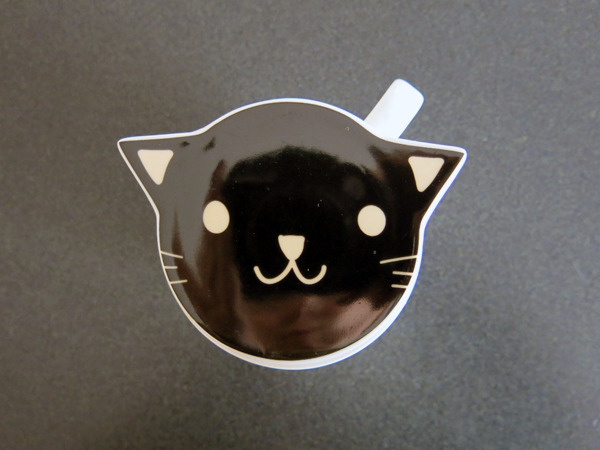 I like the idea of mugs with lids, partly because my beverages are always going cold and partially because the Helpercat™ has made it her life’s mission to steal teabags out of mugs. Even if she doesn’t actually make off with the teabag (in some cases there may never have been one present) knowing where her paws have been you’re not willingly going to be finishing that beverage after those grubby little toe-beans have been gracelessly dunked in it.

Daiso had 3 available mugs with lids; a cat, a frog and a bear. Most people will probably say “you like cats, of course you chose the cat one!” But I also like Pedobear and the bear mug did bear (punintended) a striking resemblance to him.

What made the cat mug in particular really stand out to me was the text:

The missing grammar… the lack of context… The fact that the devious little bastard has stolen the goddamn fish right out of its freaking bowl!

Speaking of devious goddamn cats, I’ve been working hard on my Schrödinger (the Hellsing manga/anime character referencing the thought experiment, not the physicist who described it) costume, and on Thursday the 27th of June decided to order a Necomimi headset for the project.

The idea of getting a Necomimi headset had been bouncing around in my head for… probably close to a year? But put off because they were only $70 in the US and the exchange rate just didn’t add up to them being over $100 in Australia.

There are currently two Australian distributors for Necomimi, they are: Miss Pixie and Mindstore. I decided to go with Miss Pixie due to their prices being lower than those of the latter.

Why didn’t I order them from an international distributor? Two reasons: 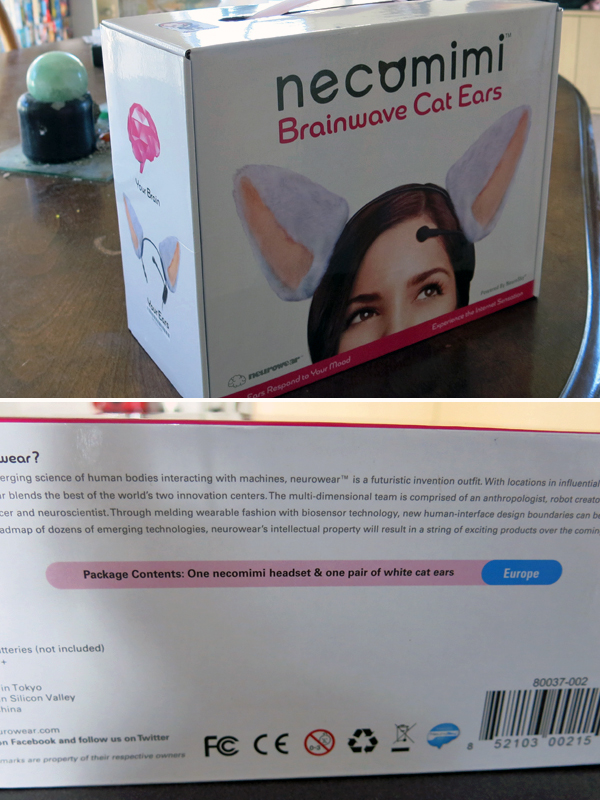 The blue “Europe” label on the underside of the box indicates that this is a 50hz model.

The idea briefly crossed my mind to just recalibrate a 60hz model to the 50hz setting instead, but if I was wrong in my assumptions of how exactly to go about doing that? It would’ve sure been a waste.

So I waited with vague hopes of Miss Pixie or Mindstore dropping their prices. Neither did. Then the exchange rate went to shit again and Miss Pixie decided they needed to increase the price to compensate for that, so I nabbed a set the day before and am incredibly grateful that they announced the price rise a few days before actually doing it.

It seemed unlikely that it would be posted right away as the staff at Miss Pixie are often very busy travelling to pop-culture conventions around the country (especially at this time of year), so I was all settled in to wait (and seriously, Australia Post once managed to make it take 2 weeks to deliver something from the other side of the city- no more than 45 minutes away from where I sit as I type this! Who knew how long they could drag out a standard delivery from interstate).

When a ticket was left in the post box by a climacophobic AusPost courier the following Tuesday, I figured it was probably for something else I’d ordered. On Wednesday morning I got a confirmation email that the Necomimi had shipped and later wandered down to the post office with the aforementioned ticket to collect what I assumed was an unrelated item.

How surprised I was to find that the headset had in fact arrived the day before it shipped! But you know what? I am well past questioning Australia Post’s time-space continuum bullshit at this point in my life and opted to joyously accept the turn of events. 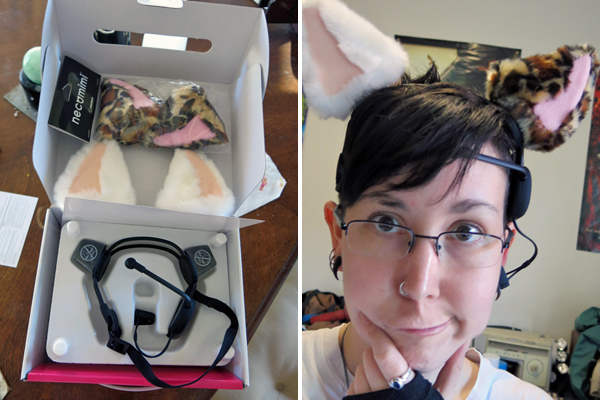 A second pair of ears were included for free!

Not only did it arrive super quickly, but an extra pair of leopard print ears were included along with the standard white ones! In a lot of ways that made up for the device costing over $100 (which was originally my cut-off price) since the ears alone are often sold for $15-20 a pair.

Needless to say, I was very happy with Miss Pixie’s service and can highly recommend them to anybody else looking to pick up a set of Necomimi in Australia.

As for the headset itself? It took an extra day to get on that because they do not come with batteries and I was well tuckered out, far beyond the ability to walk down to the shops.

They take 4 AAA batteries and the headset is surprisingly light, I have non-robotic cat ears that I swear are heavier than these things! Some people say the battery pack weighs it down on one side, but this may be due to positioning? So far it hasn’t been a problem for me. 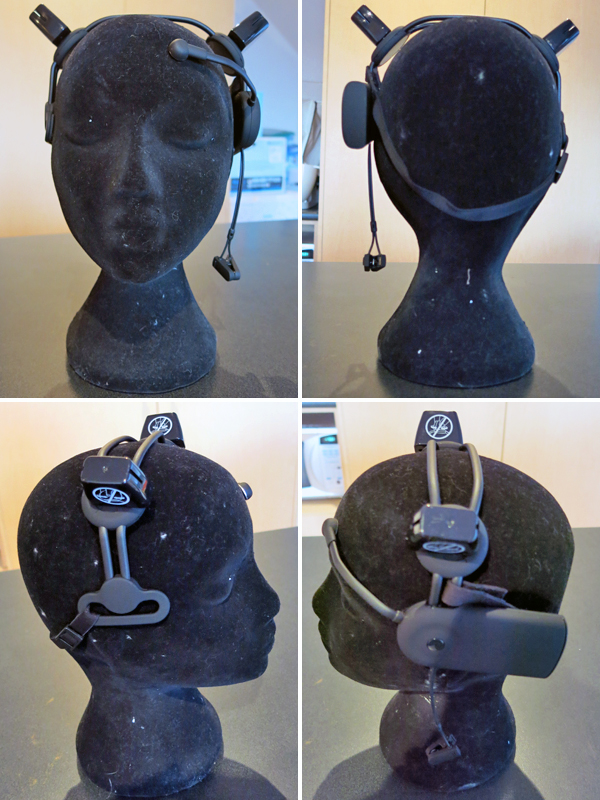 They are much lighter and more comfortable than I’d expected. Because the headset doesn’t sit on your (regular human) ears you can wear glasses normally without it causing any awkwardness of discomfort.

It sits atop the head with an elastic strap around the back to fasten it in place, a sensor resting on the forehead, and another clipped to the wearer’s ear. Some people are bothered by the battery pack and sensors but with a bit of strategically styled hair (or a wig) it isn’t particularly noticeable.

The clip sensor on the ear however, can get quite sore if you’re wearing them for an extended period of time. 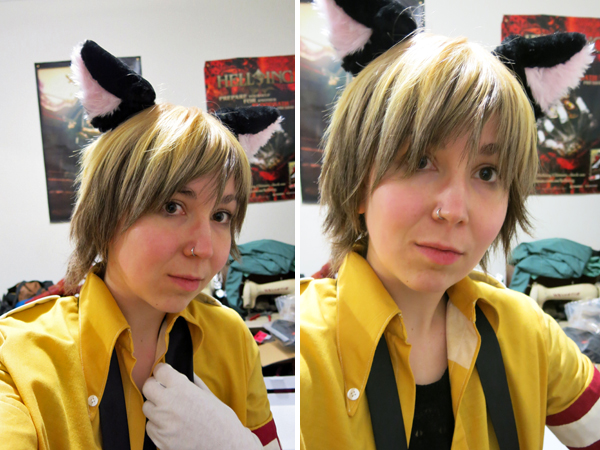 Be careful not to get anything caught in the motors. They are quite delicate and should not be jammed or forced. Much like people. The headset probably wouldn’t survive much of a fall either, if it got knocked off your head or dropped.

It is very simple to create new custom ear covers for the headset, due to the way they easily slip on and off. To make my Schrödinger ears I popped the foam inserts out of the leopard ears and constructed the new ears over those. 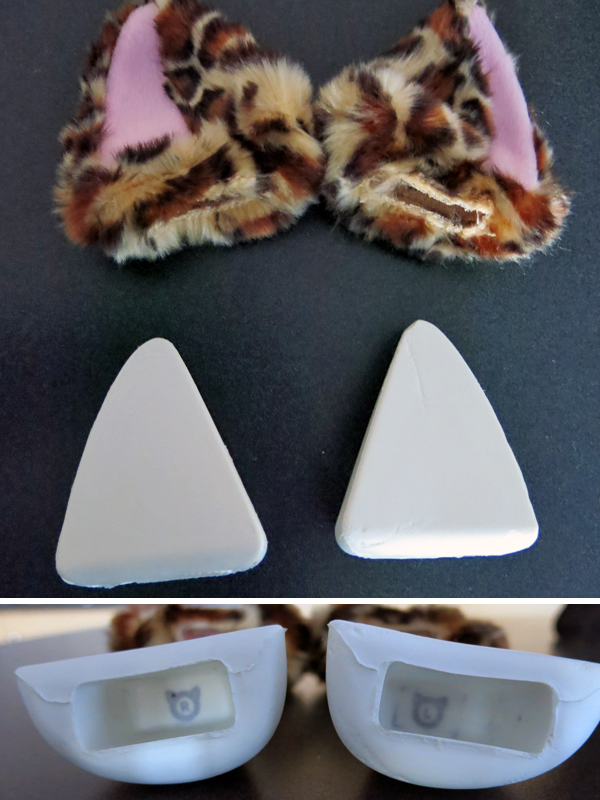 It is best to construct new ears over the foam inserts as the inserts are clearly labelled with “left” and “right” and moulded to fit snugly over the headset without obstructing the motors. As long as you are careful you should be able to swap one set of foam inserts between multiple sets of ears.

One point I should mention about the sensors is that they do need to make direct contact with the skin; if they’re tangled in your hair or you’re wearing make-up (even if it’s just a light amount of make-up) this will drastically interfere with it’s ability to pick up on your brainwaves.

Koneko is a creature of outstanding beauty and has great ability to love over huge distances spanning the globe.”– Urban Dictionary

As for the sound the ears make as they move? It isn’t much of an issue, just a quiet whirring/buzzing as they do their thing. Fairly noticeable when you’re the one wearing them but you get used to it after a short while (much like wearing big jingling earrings, only less horrible). Same goes for the feeling of the movement; at first it’s quite distracting (though mostly in a positive, curious way) but after a while you stop noticing.Miss Pixie and Necomimi both get a salmon/10.

I’m not really sure what a salmon/10 entails but FUCK YOU GUYS I DON’T HAVE TO REVIEW SHIT I AM A CAT NOW.

PS. The characters page on the Separation Anxiety site has actual content now! No more “coming soon” images on any of the pages! The rest of the cast will be added periodically as they’re introduced. First page of the prologue will be up on Thursday.