Okay, so, I mentioned that the iron had busted- which meant I was pretty useless since ironing things is a fundamental part of whatever it is that I do.

Well, I’ve since nabbed a replacement for $10 down at the local supermarket. It’s kind of a stand-in until I get my shit together enough to organise something better- and it’s horrible. It’s really light and feels like it’s going to crumble in my vice-lice grip (which, for the record, is not actually vice-like at all). The cable is too short, the supposedly non-stick plate grips most fabrics something fierce, thus causing more creasing than it presses- seriously guy, you have one job!
ONE JOB!

But… at least I calmed down long enough between iron-based rage to sort out the housework that’d been steadily piling up. Isn’t housework the worst? If you’re doing it right then nobody notices, so nobody mentions it. But if you don’t have time and miss one thing? Shit son, everybody feels a need to point out what a mess you are.

Costumes may or may not be a thing that start happening again depending how I go with this shitty iron.

Didn’t go to Armageddon on the weekend partly due to not finishing the intended costumes (broken iron, yo) and partly due to family stuff. But mostly costumes, facts are facts and we all know I’d ditch most of the people close to me in a second if it meant flouncing about dressed as fictional characters. This is probably why I don’t have friends.

But let’s talk about something more interesting, hey?!

Last Friday I went to Daiso and picked up some of their instant curry and miso soup. 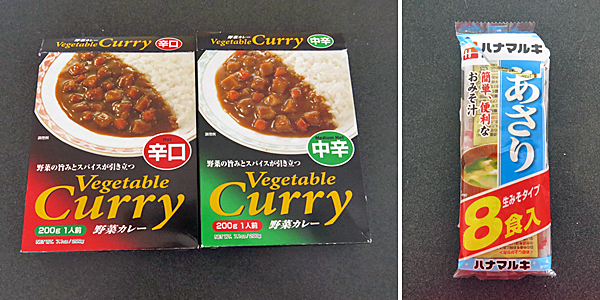 Tech Support really likes Japanese curry so, seeing these at Daiso I figured: “Why the fuck not, eh?”

Then, on Sunday, used these items to make possibly the laziest dinner ever (short of straight up getting a pizza delivered- which I’ve not actually done at this address).

The miso is a paste you add to hot water, the packet comes with 8 individually sealed portions. The curry comes in sealed single portion pouches which you drop into boiling water for about 5 minutes, then open them up and pour it out. The only real effort went into steaming the rice (brown rice, because the texture is appealing). 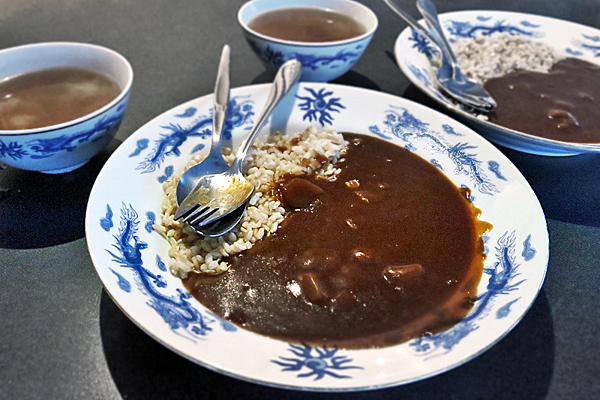 For an instant meal coming from a dollar store, it was actually pretty good. Maybe there’s better out there, but there’s also worse- a lot worse. I’m not exactly one to complain when I manage to feed two people something tasty for well under $10 with minimal effort.

The only thing that might make it better would be if the curry boxes came with multiple portions, instead of just the one (you could split one portion between two people). Also if you enjoy hot food like me you’ll probably want to add chilli, the “hot” curry was quite sweet (but I guess that’s just the style of the time). It might also be an idea to add more vegetables; carrot, potato, peas, I dunno, whatever you like. Just to pad it out a bit. Even some meat or tofu. Use it either as a meal base or a meal on its own! Imagination, guys!
Like instant noodles! You can have them on their own or stir in veggies and put an egg on top. Shit, instant food, man! What even?!

While in Daiso I also picked up these little disposable coffee-drip-filter-paper… things. 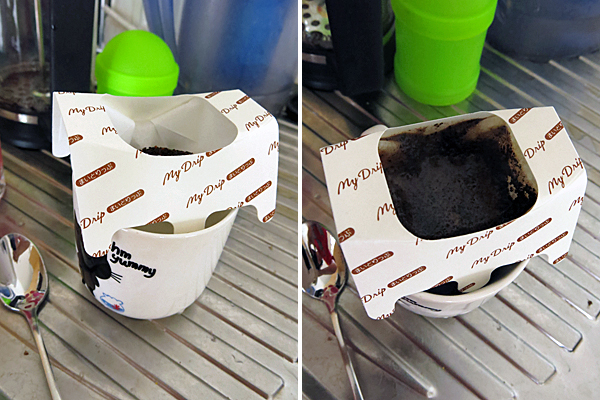 They are really cute.

You fold it, spoon the coffee (or in this case, java flavoured Teeccino) into the paper pouch, then sit it on top of your mug and pour the hot water over slowly until the mug is full. 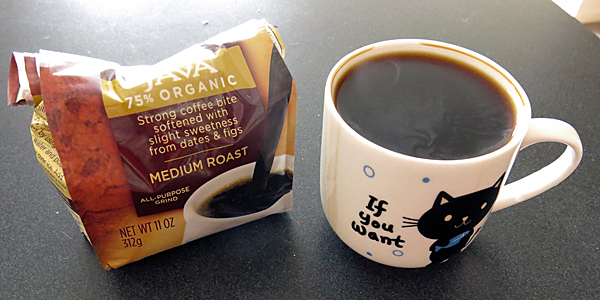 My favourite mug is also from Daiso.

They would probably be handy for people who travel or camp a lot, also convenience; the plunger is annoying to clean and I’m lazy. Or… lazy about food at least?

Honestly I wish it wasn’t necessary to eat in order to live. Eating and sleeping have become these horrible, looming, obstacles that there’s just no getting around. Last time I slept I dreamed that I got shot 3 times, the bullets hit my lungs but missed everything else and I spent the rest of the dream lying on my back waiting to choke to death. Then every so often I’d sort of… half wake up into sleep-paralysis and assume that I really had been shot, so I was kind of too scared to try to move anyway because I didn’t want to make the pain any worse than it already was (some people say you should pinch yourself to check if you’re dreaming or not, but I feel real actual pain in my dreams so that’s never really worked).

On the other hand, I’m obsessed with… looking at food… and fake food…? Because if the food is not real then I don’t have to worry about eating it or, alternately, worry about it going bad/being wasted if I don’t eat it- see? Do you see this? It is impossible to win where food is involved.

Especially tiny food decals from Daiso because my entire existence is pretty much based on Daiso products. 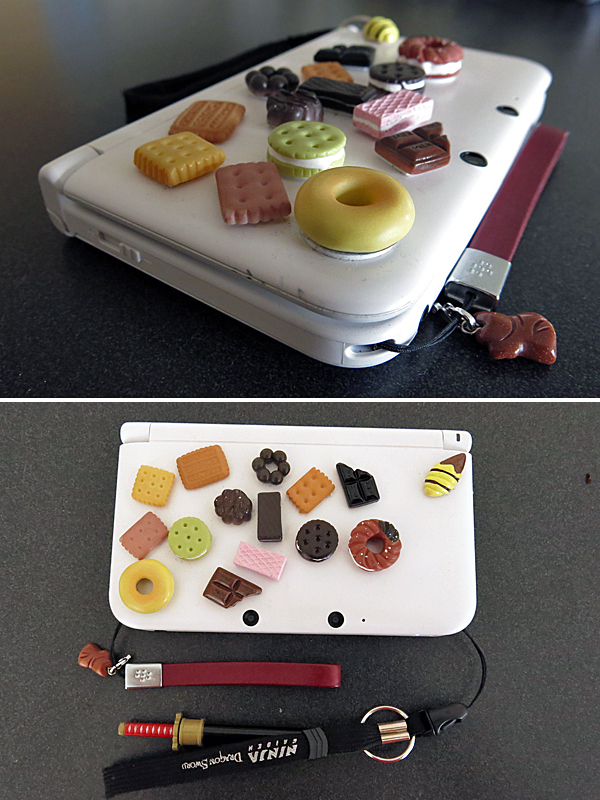 Everybody wins when the food is purely decorative.

Look at how appealing that is! Tiny food all over my 3DS! Tiny food that will never ever spoil or create a mess! So perfect and beautiful! Especially the biscuits.

Well, that’s that then. 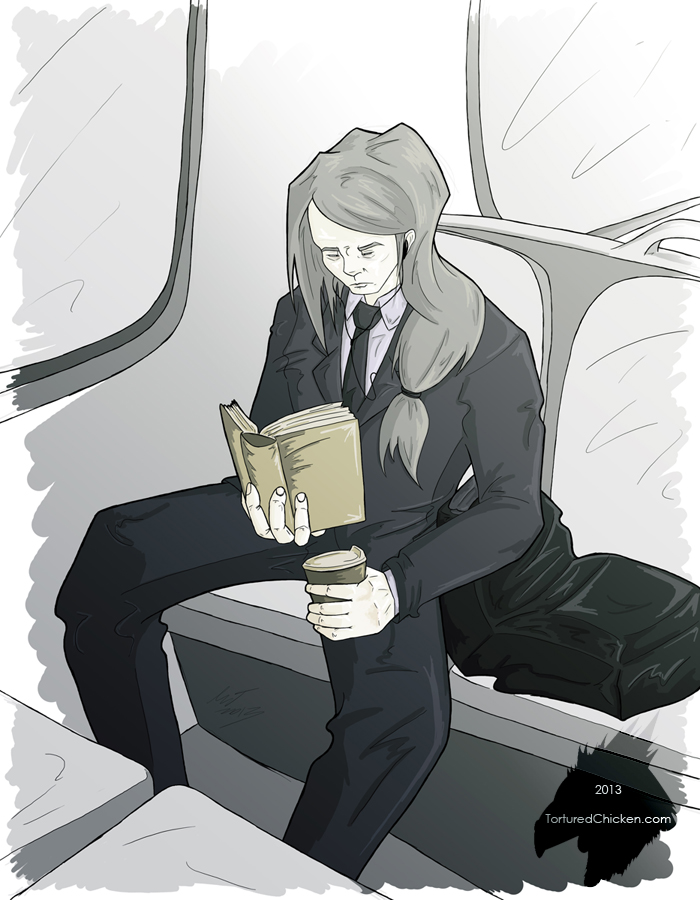 Totally, I know exactly what you mean. Almost home, like, on the train after a long day at work. I am all over this.