The Melbourne Zombie Shuffle was last Saturday so the better part of last week was spent putting the final touches on the costumes.

This year we got a small group together, cosplaying characters from the web comic Maggot Boy. Being about zombies it seemed appropriate- not to mention how much fun MaEmon and I had cosplaying two of the characters (Davey and Owen respectively) at Manifest back in August.

Gloves for Davey, top for PJ, shirt and hat for Chainey.

On Friday evening three of my favourite homeslices* dropped by to… uh… eat greasy food, drink a lot of beer (and/or tea) and play dress-ups, I guess? Oh, and make fake blood. That was a thing that happened too. The night thinly veiled by the pretence of being “preparations” for Saturday.

But mostly we just threw on our costumes (sans-make-up), wandered to a local park and behaved like teenage delinquents took photos of each other.

Hallward (our Chainey) was unfortunately unable to make it to the Shuffle on Saturday, but I still have vague aspirations of organising a proper photo shoot for this group, possibly even with a Sam and Micah (on the other hand, I always say shit like that and rarely follow through).

Some of the better photos from Friday and Saturday have been added to the Cosplay/Photoshoots page in the Gallery: 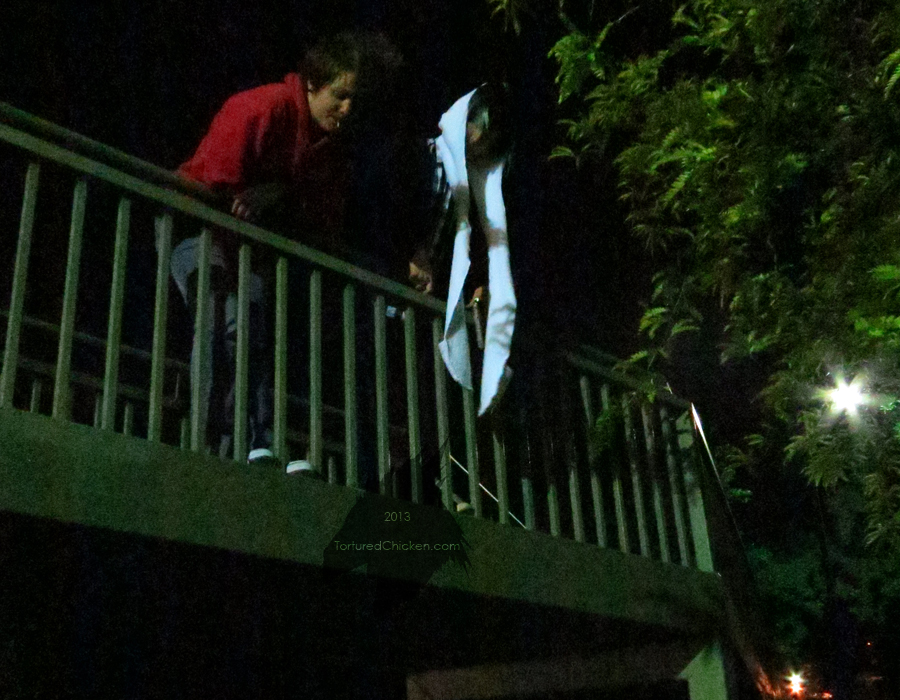 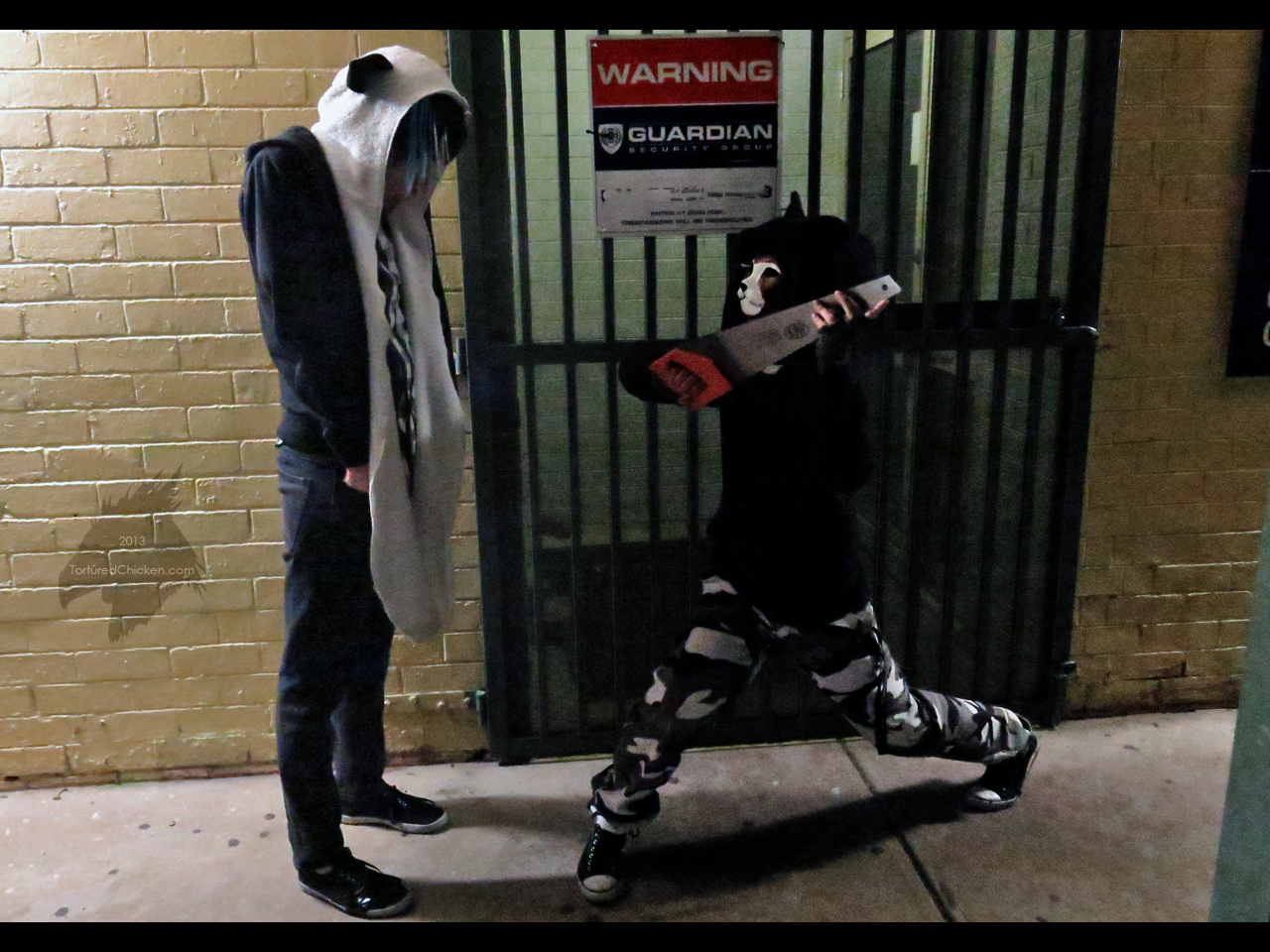 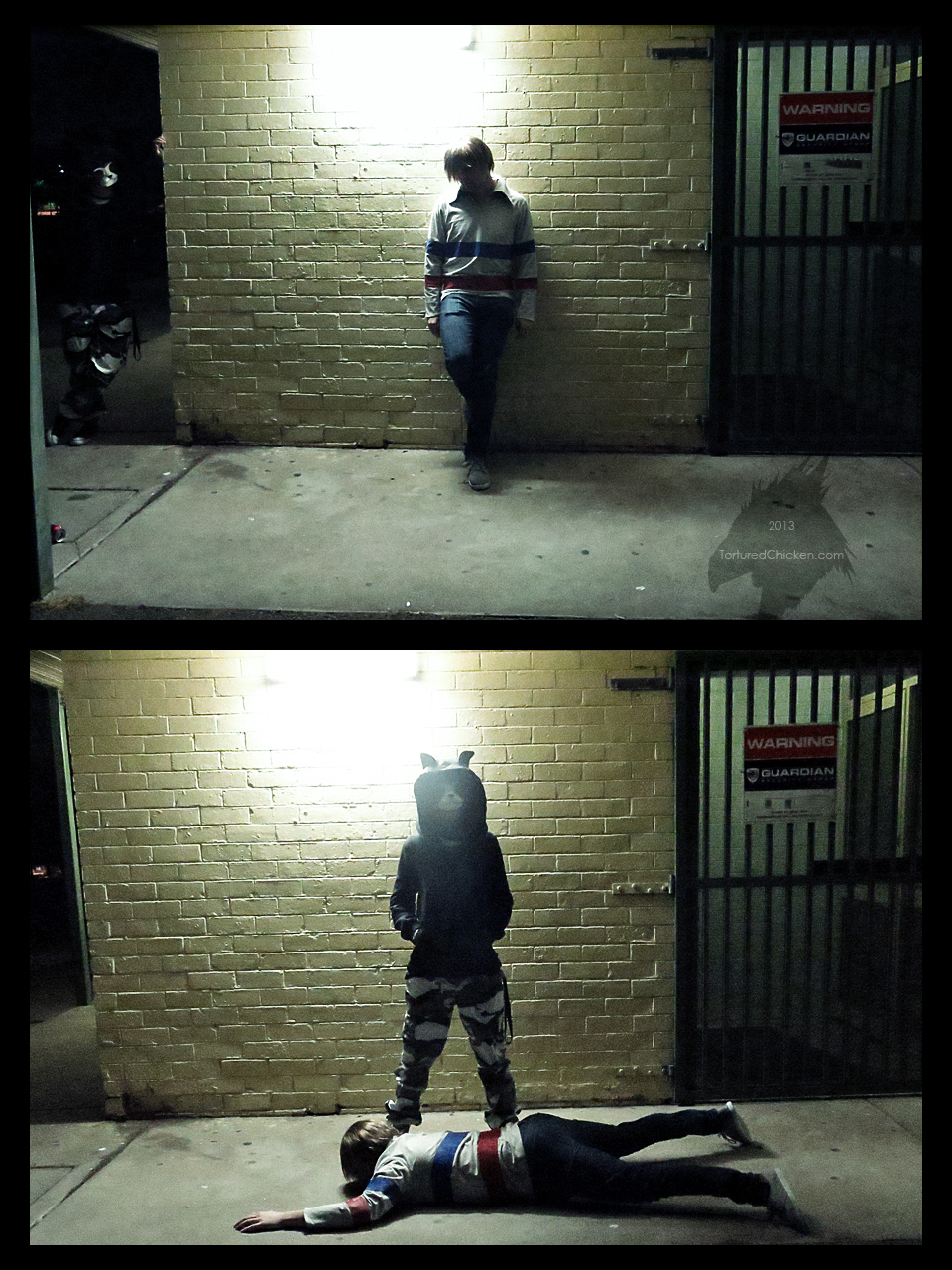 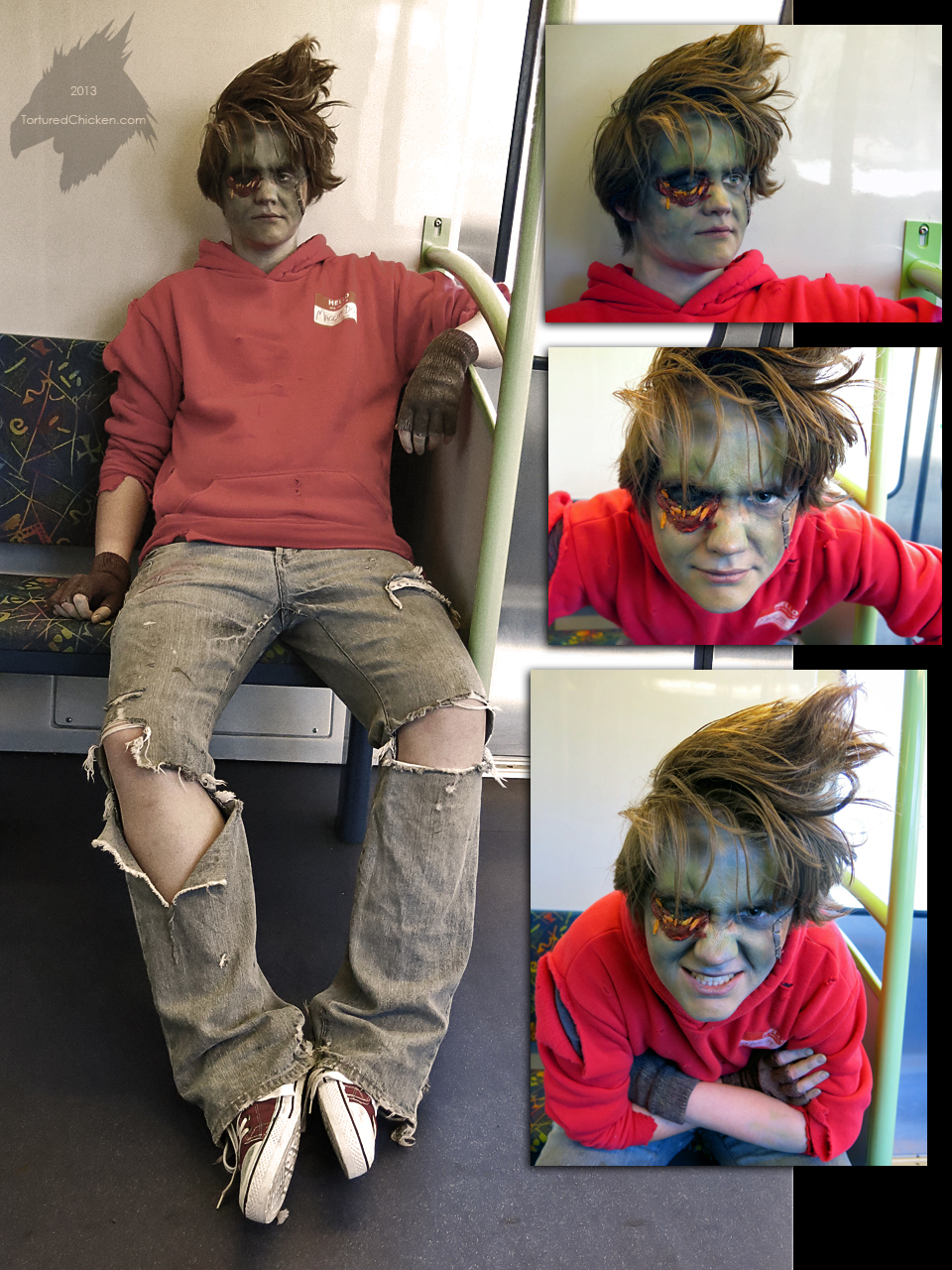 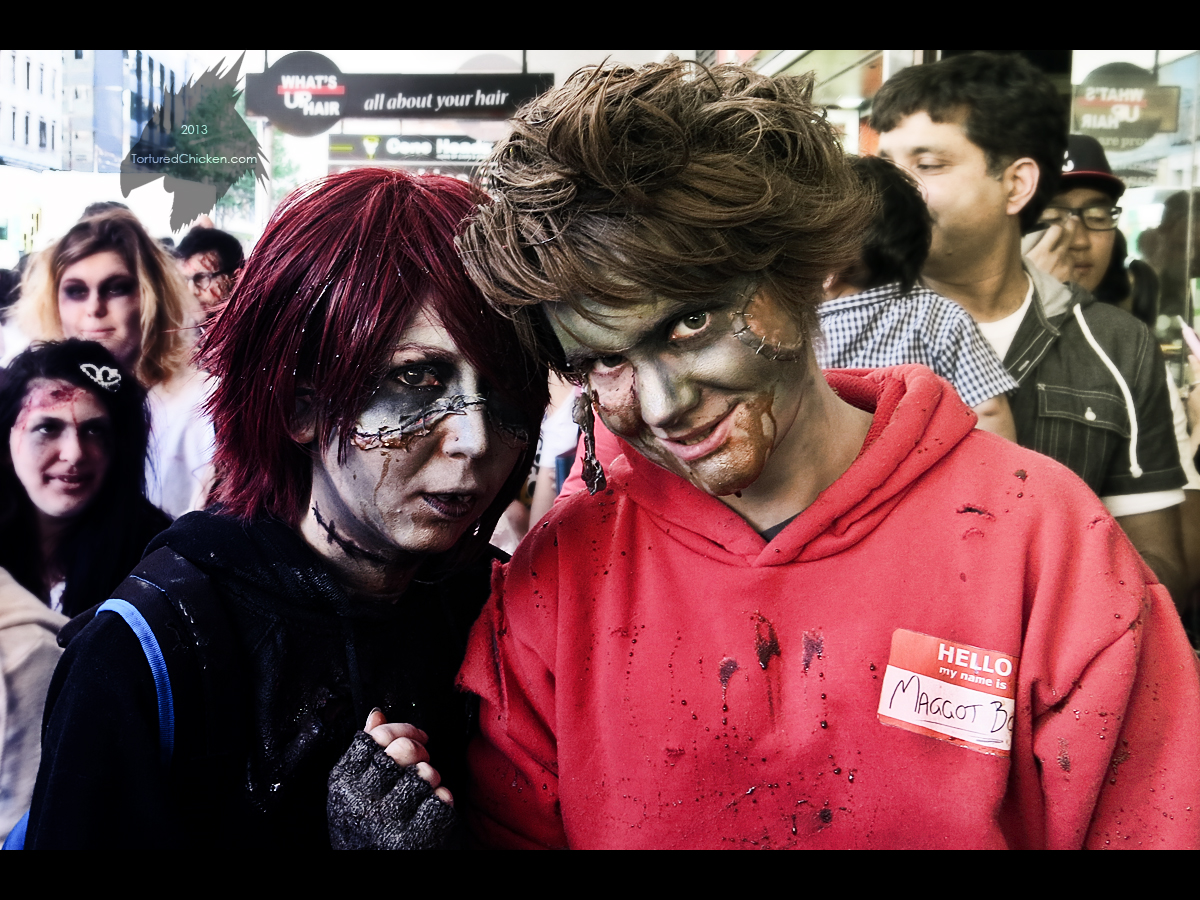 My parents even came along to the Shuffle, meaning I could offload my camera onto them, thus ensuring that there would actually be photos on it at the end of the day! In previous years I’ve run into the dilemma of being too sticky to use the camera without running the risk of damaging it. 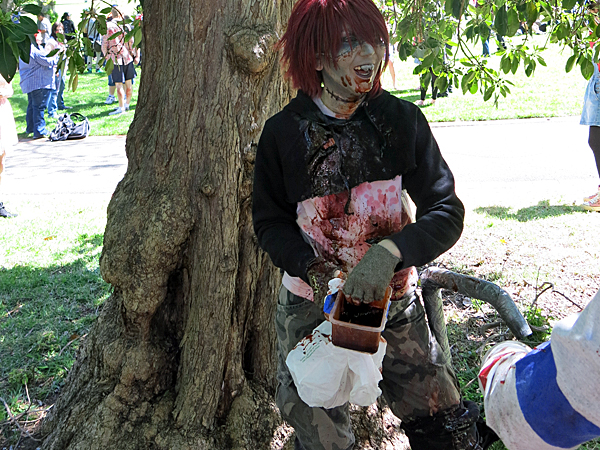 Our blood was made of golden syrup, food-dye and instant coffee. Shit was fucking delicious, yo.

But on the plus side, sugar-based fake blood is super easy to clean up.

In terms of the actual Shuffle, MaEmon and I were up early for make-up (don’t even ask how I managed to paint my face with those contact lenses in)- possibly even too early, getting there around 11am. It didn’t start until 1pm, so we had a wander to grab some lunch first. 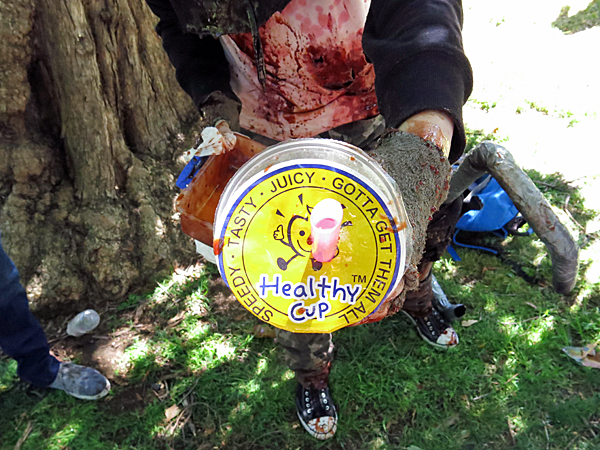 During our lunch-wander a couple of people stopped us for photos and to enquire about when and where the Shuffle would be starting.

We then met Gadam, who hadn’t crashed with us the previous night, back at the park (Shuffle starting location was in the Fitzroy Gardens). He claims he didn’t crash due to inconvenience and work commitments, but I’m pretty sure it’s because the Helpercat hates him with a fierce vengeance and he was afraid that she was going to murder him in his sleep.
I’d let her do it too.

They had air-raid sirens to signal the start of the Shuffle which gave a nice “Silent Hill” vibe to the whole thing. Or, y’know… fire station. But that’s less fun, so let’s stick with the Silent Hill comparison for now.

I lost my parents pretty quickly once it started and was a bit worried that I might not get my camera back being that they needed to leave early-ish. Gadam disappeared around three for his work commitments and luckily I relocated my father and camera around this time too- turns out he got some really good shots throughout the day! After a brief rendezvous MaEmon and I decided we were pretty tuckered out and jumped onto a train as we shuffled past Flinders St. station.

If the words existed to express the satisfaction of the post-Shuffle-shower I’d tell you all about it. But it’s just something that has to be experienced first hand. Like… too many layers of clothing stuck to your body by sugar syrup after walking in the hot sun for several hours just melting away.

There isn’t really much else to say about the day. I always enjoy wearing costumes and wandering around the city- being able to combine those two things? Shit, son, the only way you could top that would be if Tech Support came along too! But he’s allergic to fun, so…

Here are some cosplay bloopers: 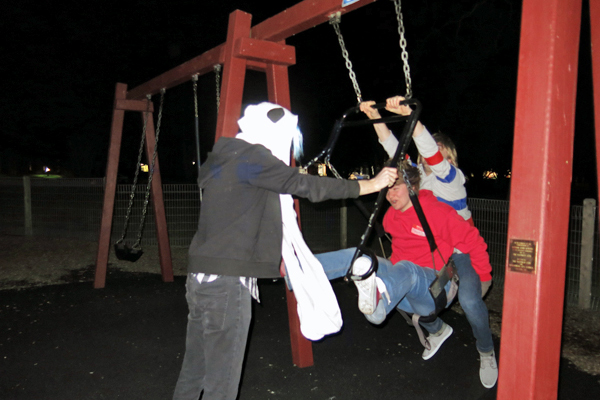 This didn’t even make sense at the time. 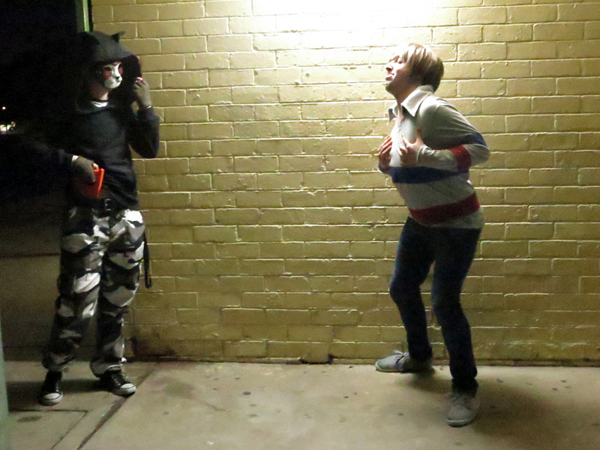 The cat-hobo mask has very limited vision so I didn’t even know this was happening. 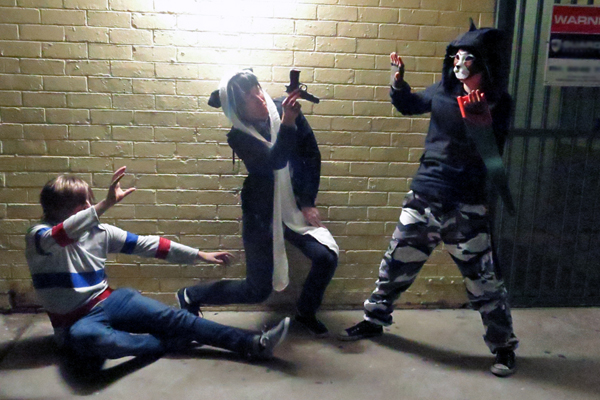 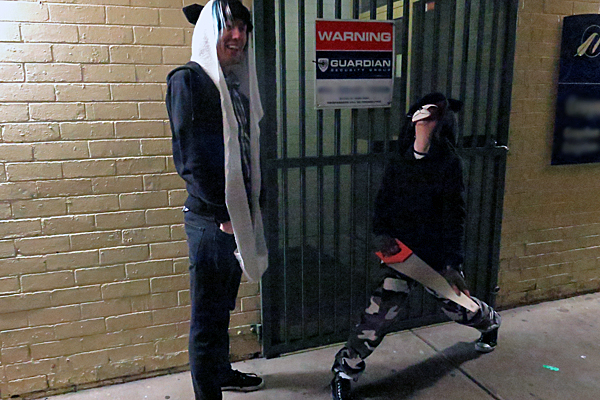 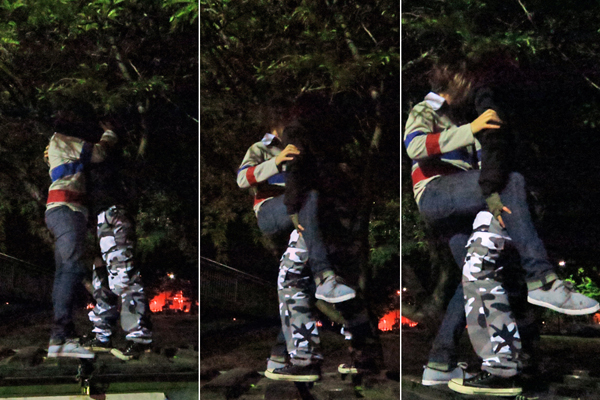 “Is there a full sized saw shoved down the front of your pants or are you just happy to see me?! … oh.” 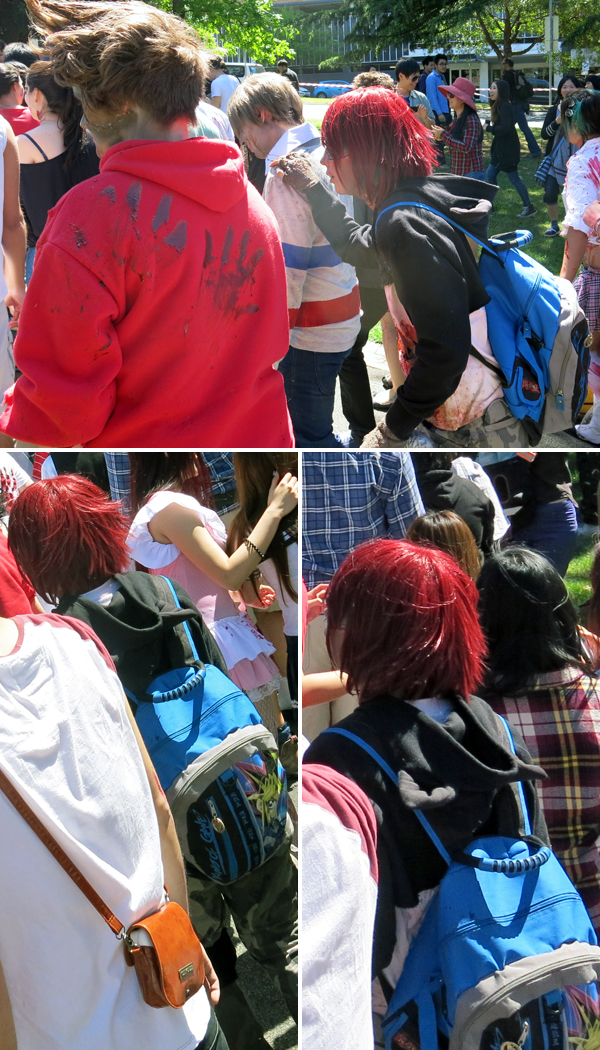 In other news, I got some shoes for my Hermann Gottlieb (Pacific Rim) costume: 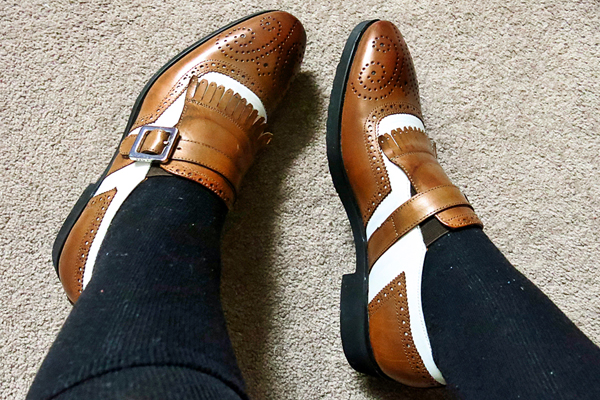 They took so long to arrive, then, when I finally got them, I discovered that they’d been sitting in the post office for over a week. Never updating the tracking or, y’know, leaving one of those tickets in the mailbox like they usually do. Third time this has happened this year. Australia Post couriers are useless. In the three years that I’ve lived here they have never once attempted to deliver anything to my door like they’re supposed to.

Don’t know if it’ll be done in time for Armageddon though, being this weekend. I’ve come over all sorts of busy and stressed this week and am sort of on the fence about whether it’ll even be worth attending at all.

The basis of my stress stemming partly from people who can’t for the life of them seem to keep appointments and partly from the fact that:

It was horrible, there was water leaking everywhere. The poor thing had a 3 year run which I guess is pretty good for a domestic, considering what I put them through, but was not able to be salvaged.

This means that textile work for the foreseeable future will be excruciatingly slow to non-existent until such a time as I am able to organise a replacement.

As I tend to leave my iron on all day for weeks at a time and heavily steam everything, I’m looking into a gravity-feed style steam iron. They’re designed with that sort of abuse in mind. Of course, you can’t just go down to the local department store and pick one up so it may be some months before I’m able to be up and running again.

But I will post an update once it’s sorted.