The mystery of the silly padlocked footbridge has been solved! 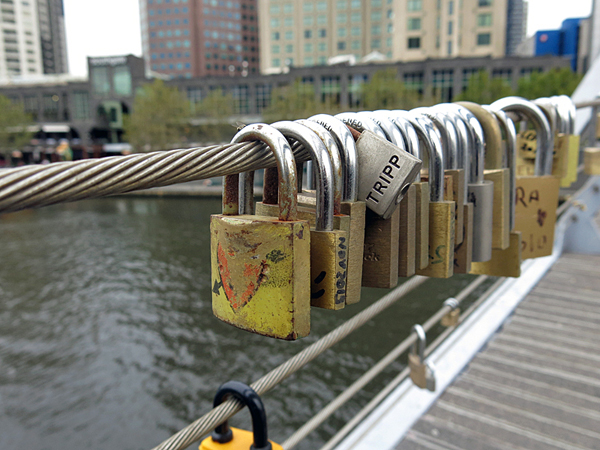 What’s that? You have no idea what I’m talking about?

Some months ago, perhaps as far as a year or slightly more (yeah okay, I don’t really know when exactly, nobody has ever accused me of being particularly observant), I was probably intoxicated given the sketchy memories crossing an unassuming footbridge over the Yarra River in Melbourne from Flinders Street railway station to Southbank- an activity of which I have frequently partaken over the course of my life- when something shiny caught my eye… 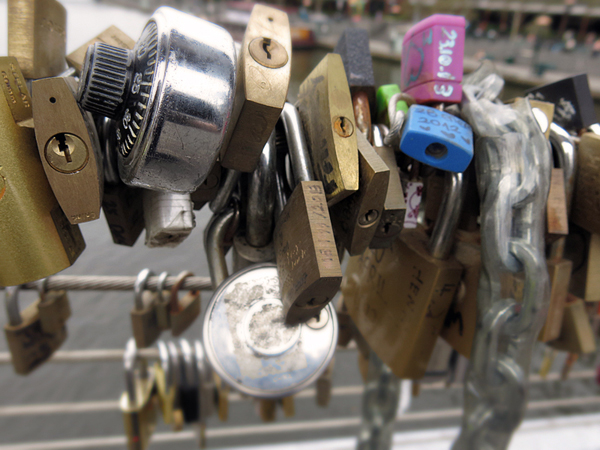 RANDOM PADLOCKS CLIPPED TO THE RAILING CABLES! WHY?!

Comprehension for the situation? There was none. Nor were my companions as captivated by the mystery as I, and so we journeyed on.

Over the next months I noted that the amount of locks on the bridge was increasing, slowly, but noticeably. 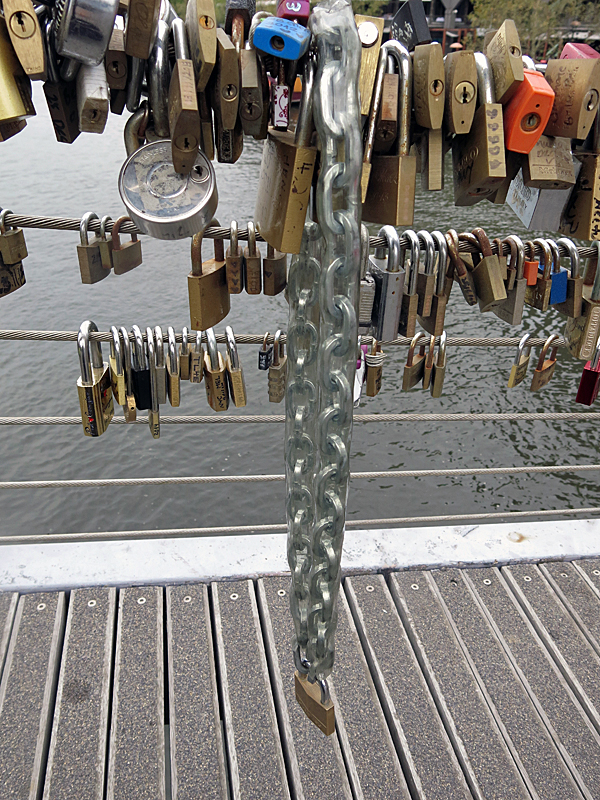 Bored photographers, from hobbyists to professionals, seem to like it.

A mental note was made to join the leagues of self-appointed photographers in their pursuit of aesthetically pleasing hipster imagery, perhaps as a part of that Project 365 photography challenge. But every time I was in town I either had no free time at that end of the city, was with companions who did not approve of my wholesome curiosity, or else had already fulfilled the photographic quota for that day.

Until today that is! 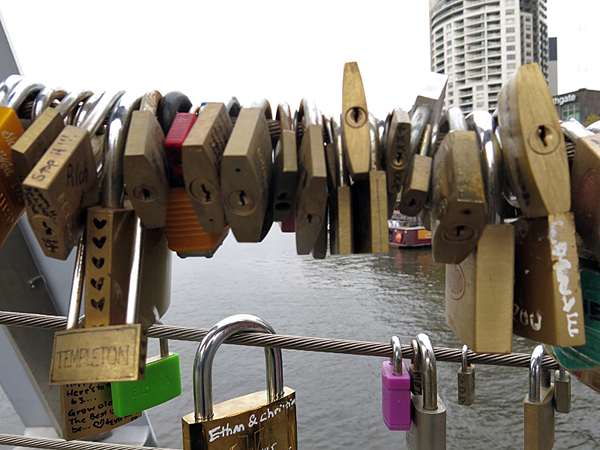 Point is I had a solid half hour of certified alone time between arriving in town and important commitments, so hurried to the bridge not really thinking anything of it. 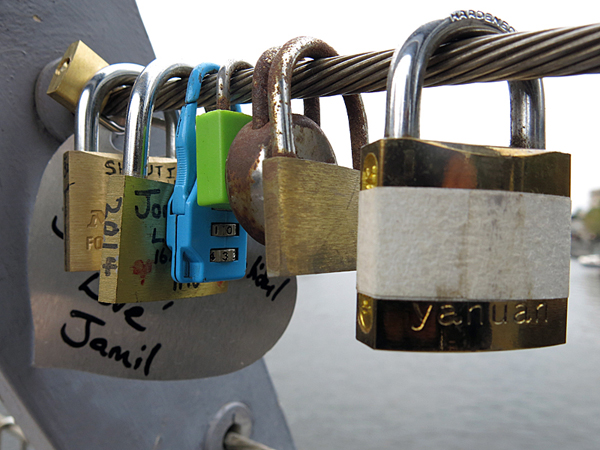 Seriously I had no idea this was a thing, I thought people had literally just been putting them there for nothing more than shits and giggles. Like in high school when I made a point of sticking cheese to this one pole outside the locker room everyday and eventually other people started sticking their unwanted cheese there too. We called it the Cheese-Pole. But that’s a story for another day.

The bridge was fucking crowded. Entire city was really, but then it was peak hour on a Friday, lots of people finishing with school and work getting ready to party. Not to mention Valentine’s day; which is where the bridge-crowd comes into it.

It was not a crowd of unrelated individuals, but a crowd of couples ceremoniously affixing new locks onto the bridge?! 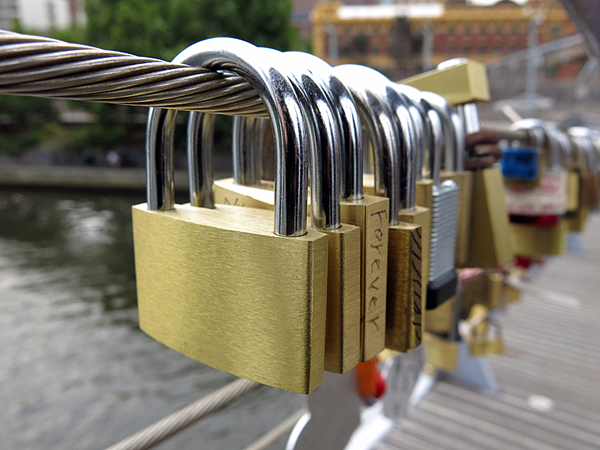 How blessed I was to witness these fine creatures in their natural habitat!

Being up close and personal to the locks revealed yet more clues to this mystery; locks with names, dates, and short messages or images scrawled on them, locks with notes and other small charms affixed by pretty ribbons, bicycle locks looped on in heart-shapes (which I was unfortunately unable to photograph as those were located in the densest part of the crowd and I did not feel that it was my place to so brazenly interfere with the delicate ritual of defacing public property with padlocks). 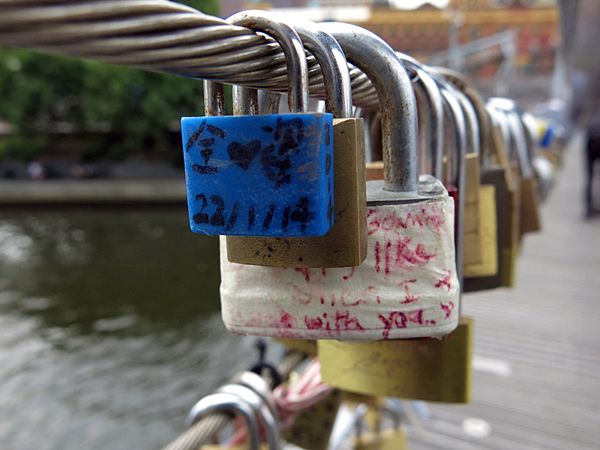 Apparently this is common practice in some circles?!

The locks are referred to as “love locks” and supposed to be clipped somewhere permanent to symbolise the bond between the lovers who put them there.

Sometimes there is an added step to the ritual of throwing away the key for reasons I am yet to determine, but I sure hope people aren’t throwing keys into the river because that would be littering which I do not condone (some locks had their keys fastened on somehow, and others were combination-style, which makes sense, that way if the relationship fails one of you can go remove it in order to save future lock based anxieties; y’know, if lock rituals are a thing in all of your relationships… yeah, okay, I don’t really know how interpersonal relationships work).

As a bonus here is some vaguely (b)romantic art resulting from attempts at breaking unmotivated heat-based funk:

Two boys from a stupid dream I had a while ago– 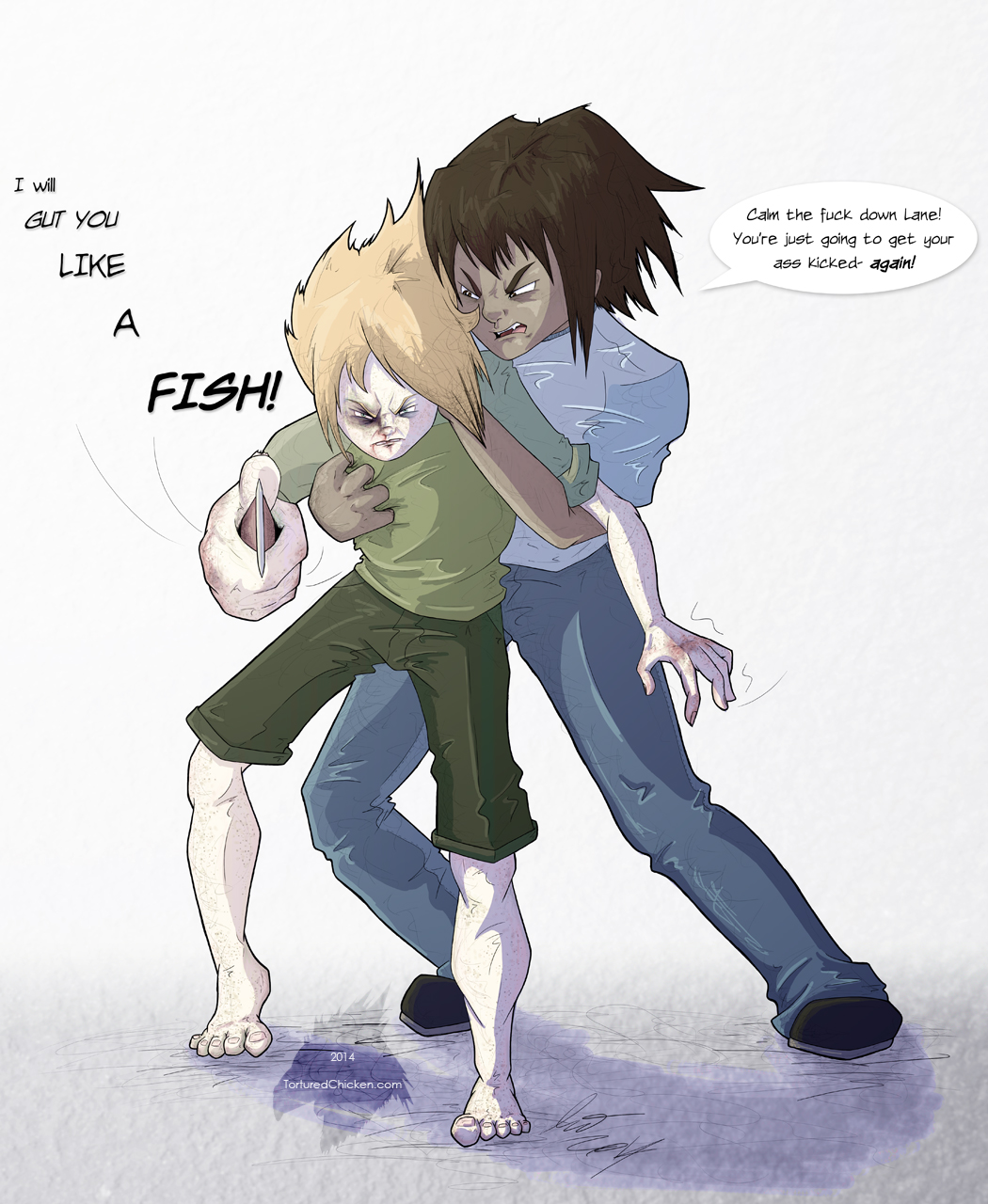 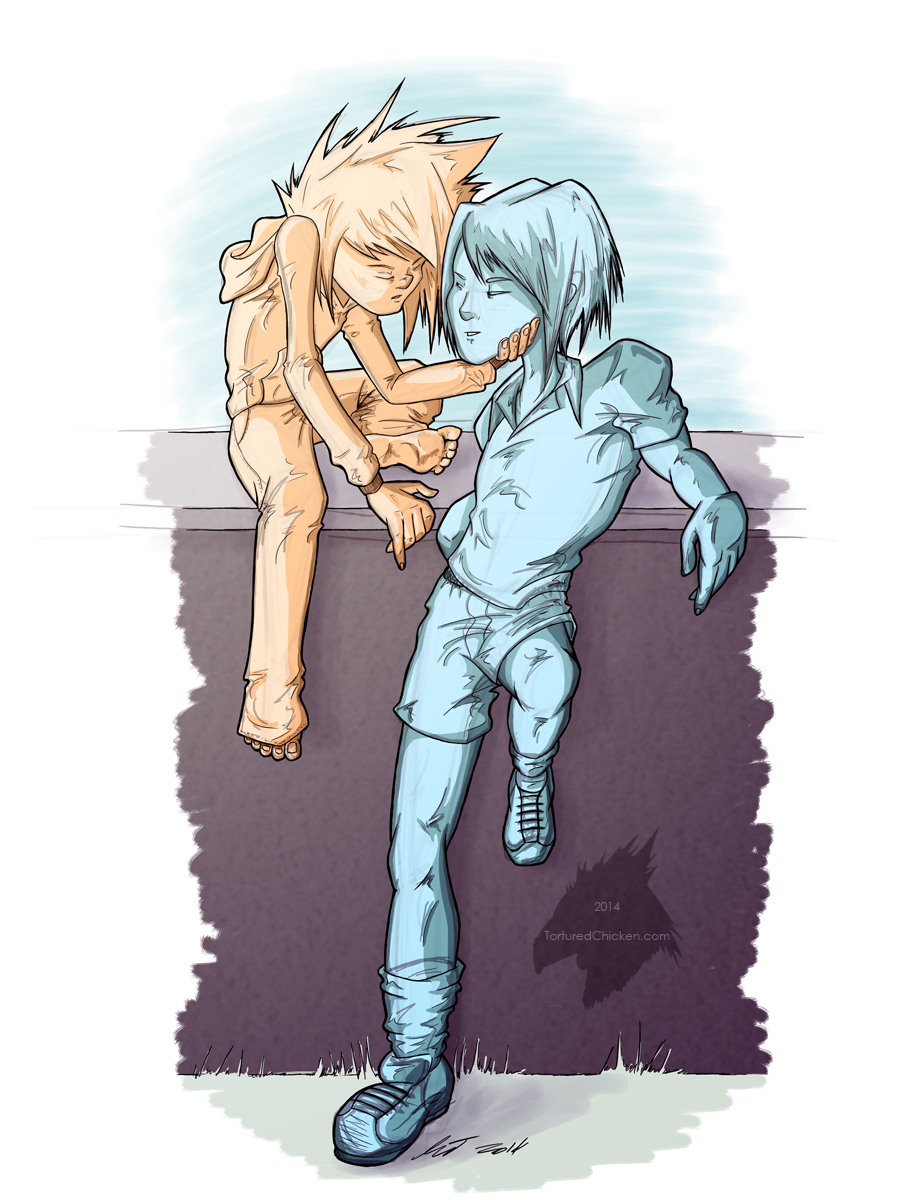 They have names now, Lane Rees and Anh Linh Cao.

And some Maggot Boy fanart because it’s my fave (y’know, in case the incessant cosplay didn’t clue you into that already). 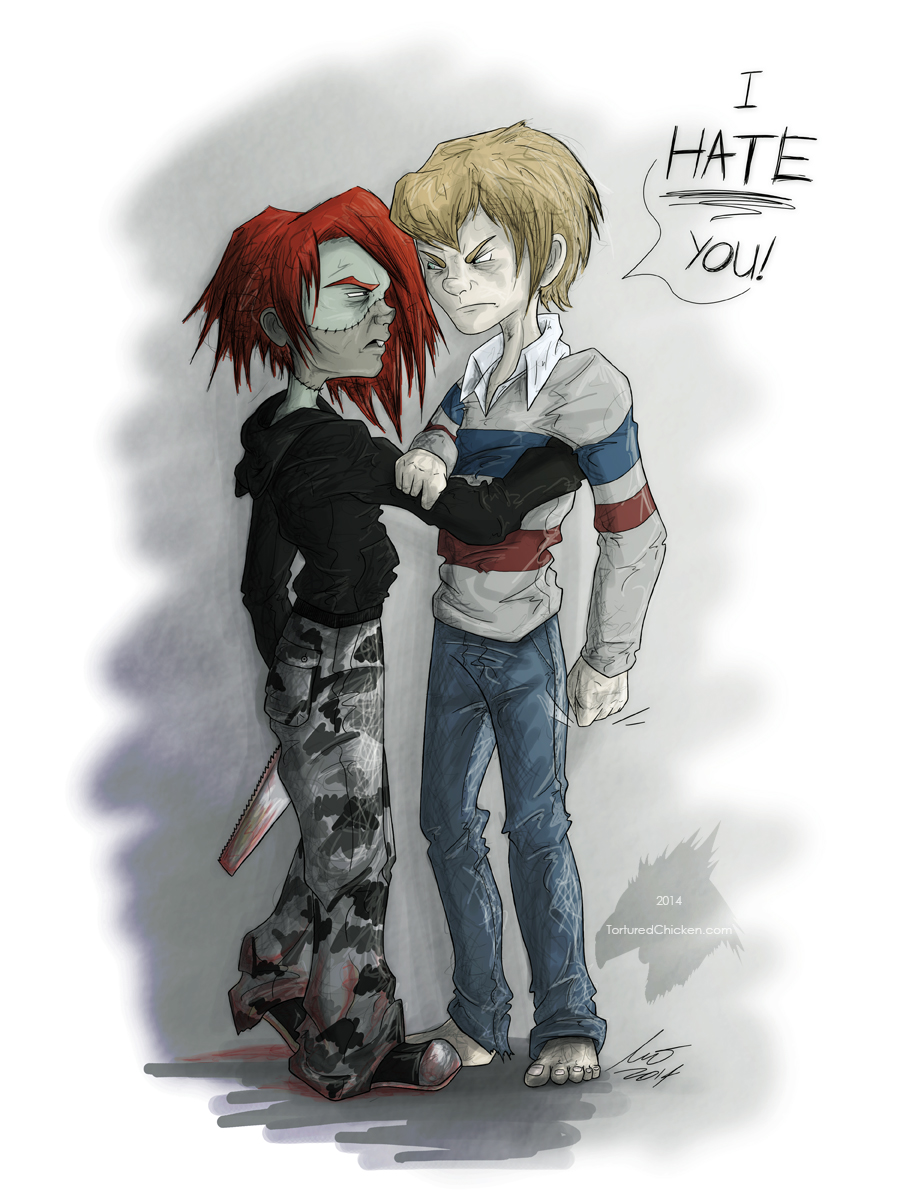 I will ship Parker and Owen until the day I die. Do I look like I care about necrophilia implications?

Last thing; summer is terrible and I hate it. Aside from my heat-based unmotivated funk, half the state (maybe country) has been on fire recently.

This is the view from my apartment on a clear day: 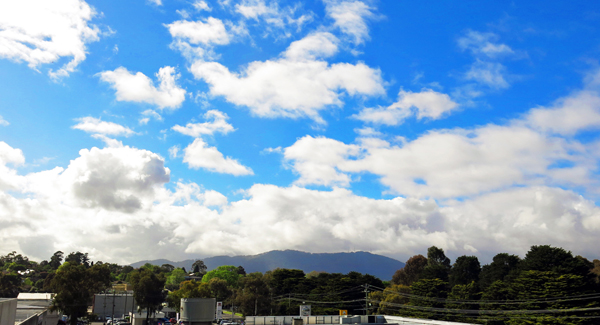 Wow, beautiful! Look at that! Dandenong ranges right there! Fun story, I grew up in those mountains, but left because they seriously spend way too much time on fire in the summer.

This is the same view any day this passed week: 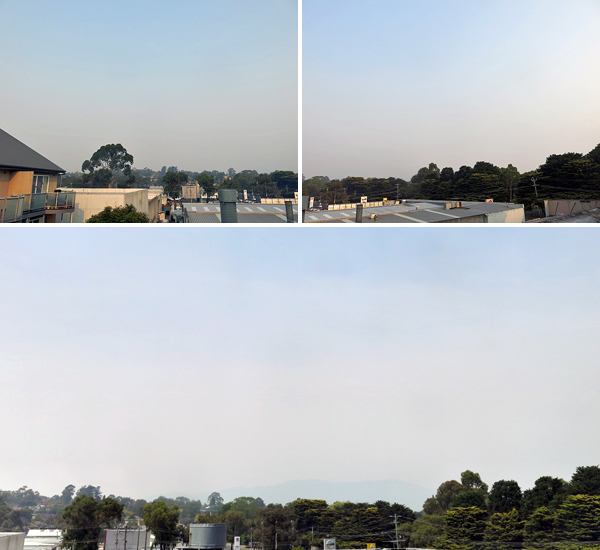 Add to that the fire department’s use of air-raid sirens and this shit is just like living in Silent Hill.

That is not clouds or fog or mist; that is smoke and ash because everything in this country is a fire hazard!

I sincerely hope that everybody is keeping themselves safe and has an evacuation plan in place in case things get bad.