Recently I have been vaguely attempting to actually work on personal cosplay projects again (after realising that we’re nearly a quarter into 2014 already and all I’ve really done between paid jobs is wallow in self-pity).

To be honest I’m not really cut out for this whole “being an adult” thing.
True story: I’ve gotten up every day with the intention of cutting my fingernails for the past month-and-a-half. They’re impractically long, chipped, cracked, dented, and any day now one is going to break right back at the skin line and it’s going to hurt like a fuck.
But I just can’t bring myself to care.

Unfortunately, the more actively interested I am in any given task, the less valuable it is to other people, as a result of this Separation Anxiety has suffered the most. For the foreseeable future updates are going to be sporadic. At first switching to a fortnightly schedule seemed right, but quickly came to realise that promising any sort of schedule is completely out of my capabilities at the moment. The only promise which can be realistically adhered to right now is that updates, if when they happen, will always be on Thursdays- for the sake of consistency if nothing else.

When SA started, keeping a backlog seemed like the best way to avoid exactly this noise. How wrong that was! The thing with keeping a backlog is that once you start eating into it, you actually have to replenish the pages! Who knew?! With pages taking 3-5 days (between other commitments) depending on complexity, maybe two pages can be produced in a week- if there are no other commitments at all and I just…

Cosplay tends to be pretty motivating, so on the rare occasions when spare time has been happened across recently, costumes have been the go-to.

Which brings us to the Gravity Falls journal #3 (to go with my Dipper Pines costume); while the notes and illustrations are yet to be penned, the pages are 100% ready to get real and you can bet your ass they’ll be the first down if when motivation ever gets back home. 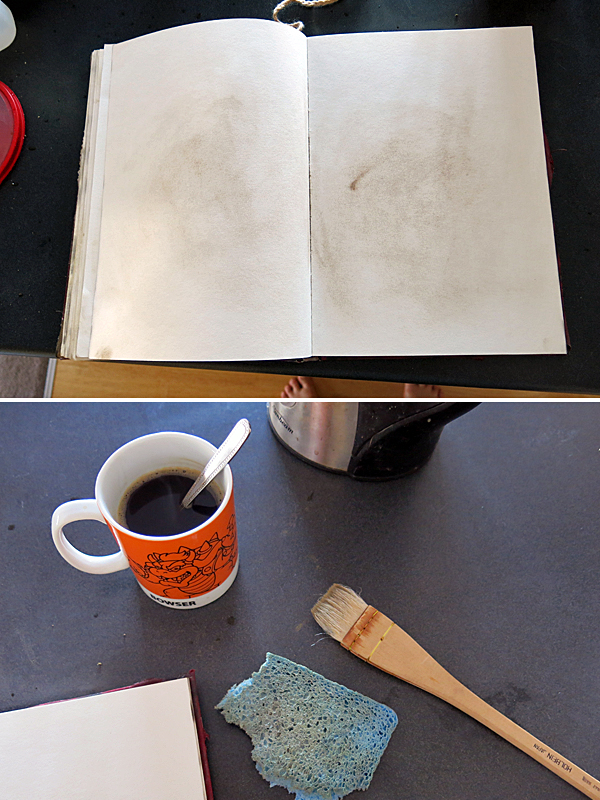 This is why you shouldn’t dust on a regular basis, never know when it’ll come in handy. 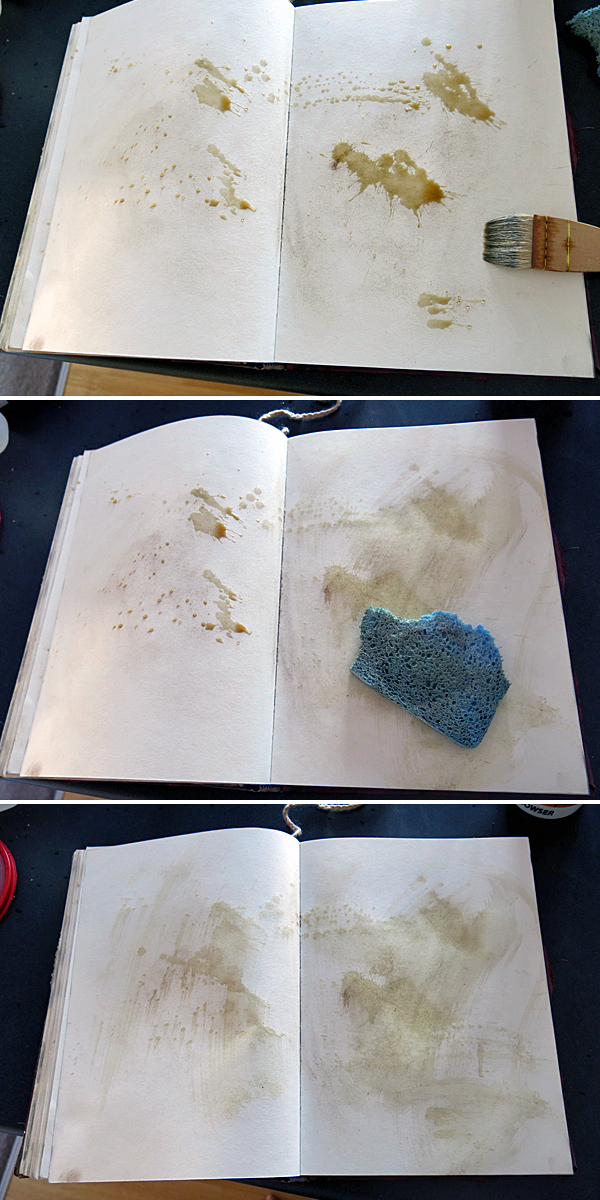 It was quite the therapeutic experience.

Which was then dripped, brushed and rubbed with instant coffee. Once dry each page was coated with a matte sealant spray (mostly to fix the dust in place) and left to dry again. 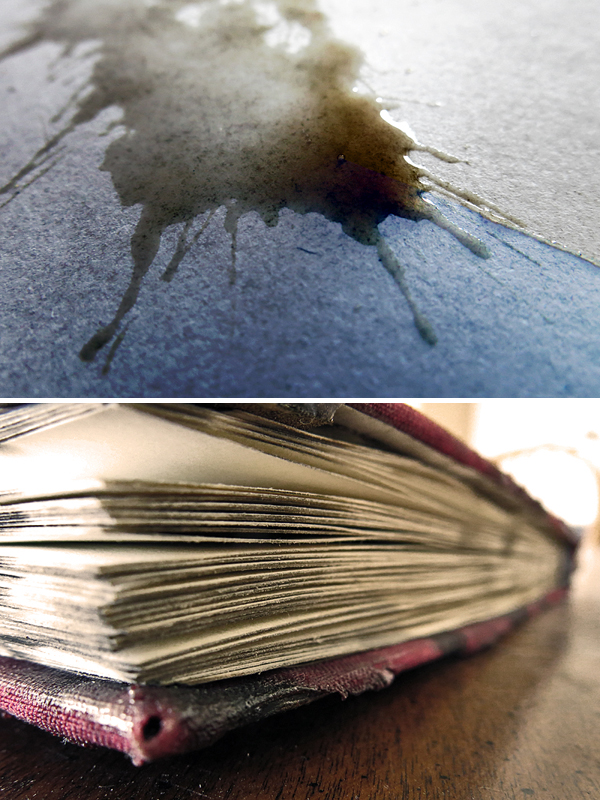 The edges of the pages were singed with real actual fire because this project is basically a home-pyrotechnics disaster waiting to happen.

Getting those pages grubbed up was incredible. Like something real had actually been achieved. Like maybe priorities are irrelevant if you truly enjoy what you’re doing? … Right up until any semblance of joy is crushed under the weight of the cold hard realisation that “enjoyment” doesn’t even cover the menial costs of keeping a bank account open- let alone put food on the table.

See what I have to deal with?

The sort of people who will never understand the sublime joys of vector shapes. That’s what.

Speaking of vector shapes, I really want to get a certain Pacific Rim costume which was started about a week after the film came out finished this year. It isn’t even a particularly complicated costume, in fact it is so close to completion you can almost taste it. You twisted fuck, stop licking your monitor! If nothing else it’s unhygienic. 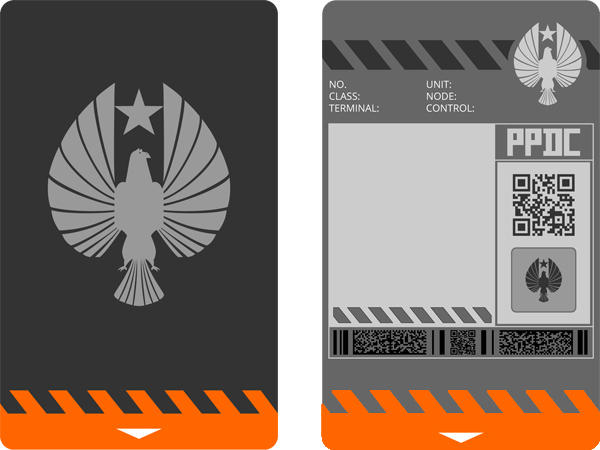 Seriously though, it’s a Pan Pacific Defense Corps identification badge for the character Hermann Gottlieb because I am going to cosplay that shit so hard.

The badge was drawn up in vectors, copying from references of Mako and Raleigh’s badges. Some liberties were taken with the QR codes/data matrixes (QR code leading to my website, data matrix stating my name and the year the costume is completed/debuted I hope. On the reference cards the QR code leads to the PPDC website, and I was unable to successfully scan the rectangular code, it may have been purely aesthetic or my phone might just be incapable of scanning that style of code, life mystery right there). 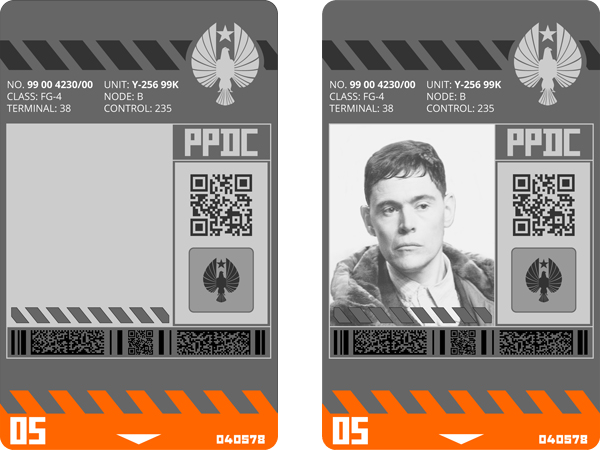 People who have a not very secret fetish for barcodes: me.

To fill out the info on the card some more liberties were taken as it is very difficult to locate ID references of any character other than Mako or Raleigh, despite having sat way too close to the television while bothering the blu-ray with a pause button for several tedious hours. The only parts of Gottlieb’s card I was able to clearly make out were the number 05 on the lower corner (keeping in mind that I have terrible eyesight and am probably wrong) and orange border (which Newt’s card also features, maybe a K-Science branding thing, the pilots seem to get blue).

Initially I’d planned to just make shit up to fill it out, but then realised that all the info on Mako and Raleigh’s cards was exactly the same (aside from the numbers 02 and 01 respectively, in the lower corners), so I rolled with that.

Another detail noted while working out the pause button was a hologram image on the cards visible from certain angles and lighting conditions, similar to the sort of thing frequently used on bank cards or drivers licenses. It appeared to be a repeat of the PPDC logo and would likely be a feature added during the manufacturing process of the cards. While I don’t currently have access to that sort of card-printing technology, I can certainly fake it in a really cheap decidedly lazy way, by repeating the logo as a watermark over the base card. 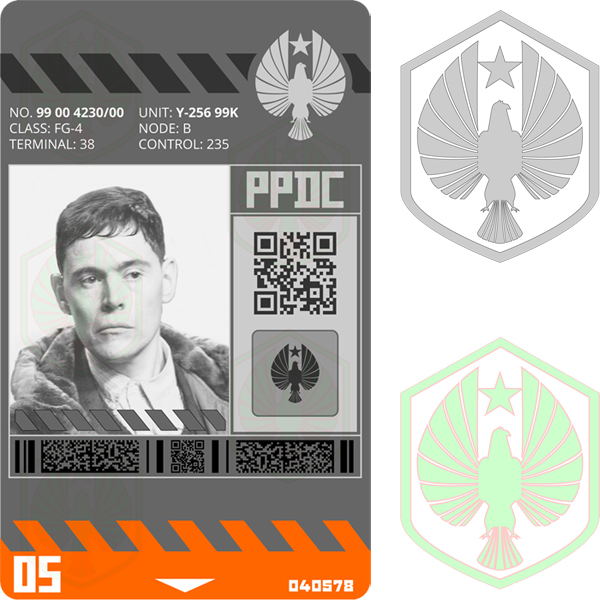 If anybody wants to have at these I’d be happy to put the standard barcodes on the base card.

To finish the whole thing off some grotty textures were added. 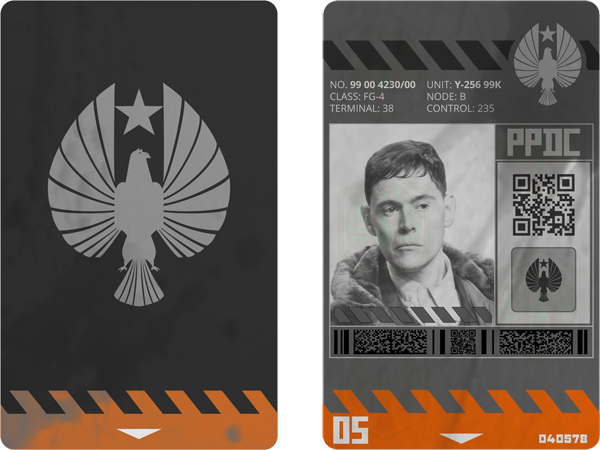 Ah, looking up at that, a certain somebodies drift-bro is probably going to need an ID whipped up as well.