Fact: I have been a huge South Park fan since way back and recently quit life to play their new game; The Stick of Truth. 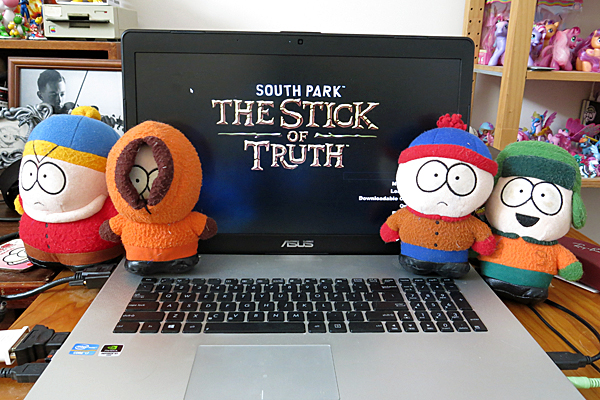 Plush dolls from 1998, times sure have changed since then.

This is a game I’d been looking forward to for… quite a long time, which feels a little strange being that I’ve never had more than a passing interest in any of their previous ventures into videogame territory. Shows don’t always translate so well into games (or, for that matter, the other way around), not to mention that nagging fear that anything you look forward to will be underwhelming.

Thankfully this was not one of those occasions.

To be honest, I’m not really sure how to word this entry. A minute ago (by which I mean “over the course of several wasted hours”) I typed up- and subsequently deleted- an essay on the feelings I have toward South Park and my history with the show. But it was all kinds of irrelevant.

What I will say is that the show really spoke to me as an 8/9 year old because it was (and still is) a show about 8/9 year olds. Whether or not it was an appropriate thing for me to be watching at that age (and that really is how old I was, we’re talking back before I turned 14 and subsequently ceased aging) is a question better directed toward my parents, who despite not being 8/9 years old at the time, also seemed to enjoy watching it. 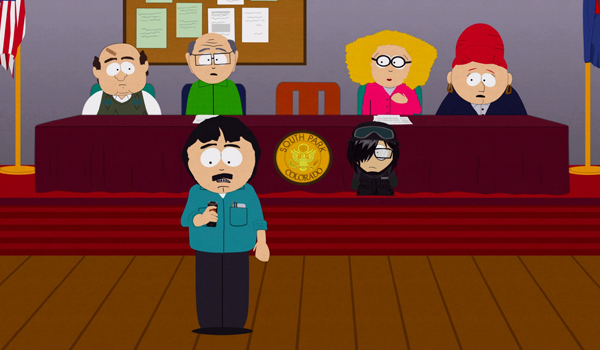 The gameplay is pretty solid, at the risk of making an awkwardly tenuous connection I’d compare it to Nintendo’s Paper Mario games (albeit not quite as family friendly)- a riveting story, construction-paper art style, turn-based combat, a main character who doesn’t have a whole lot to say and… that’s about where any reasonable comparisons end.

It probably goes without saying that the more you enjoy the television series the more you will get out of the game. 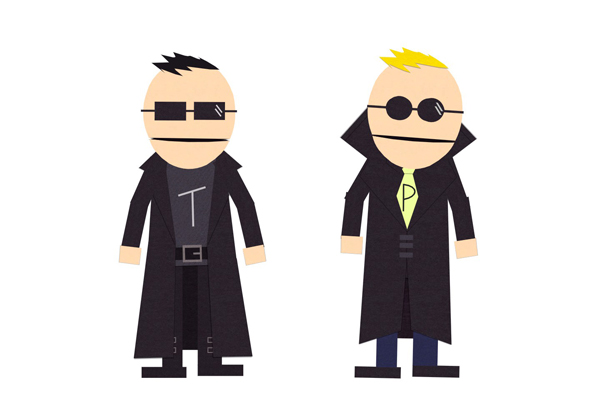 The animation is spot on (which I believe has been an issue in the case of past SP games, where the technology simply wasn’t available to achieve the ridiculous stop-motion construction-paper aesthetic in game format) and to top that off the story is just… it really is like playing through an episode of the show. In the best possible way and, speaking as the “new kid” in South Park, I was not emotionally prepared for everything that happened there. 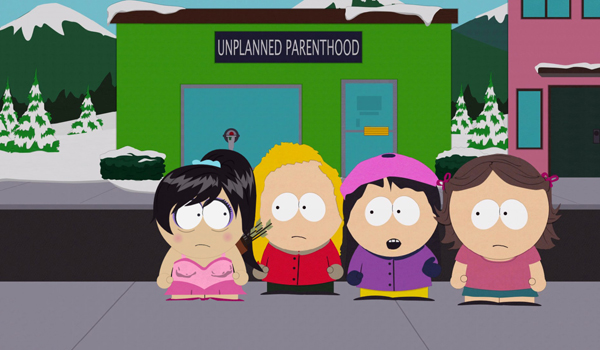 Actual image of what I actually look like in girl clothing.

You get to decide on the appearance of your character. Naturally I got pretty invested in this process and tried to make the character resemble me as closely as possible… 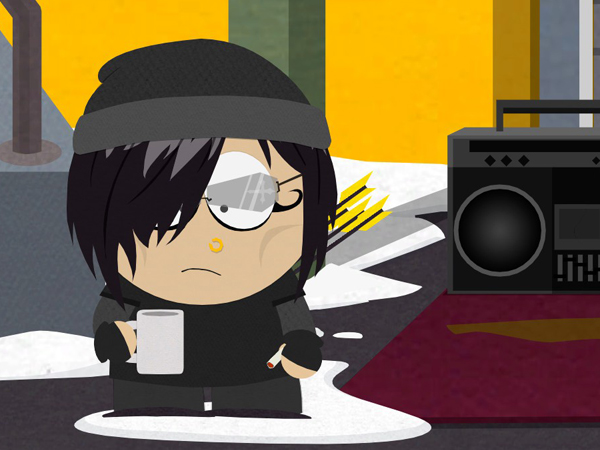 That is, me now, as opposed to real actual 9 year old me who was entirely less fashionable.

Success was achieved; he has a shitty emo haircut, sweet glasses, bags under his eyes from the months of sleep-deprivation (well hidden by entirely too much eyeliner), and while that particular screenshot was taken during my attempt to recruit the goth kids, I’ll have you know that his default outfit featured an argyle sweater.
Because I fucking love argyle.

Do not fight me on this. 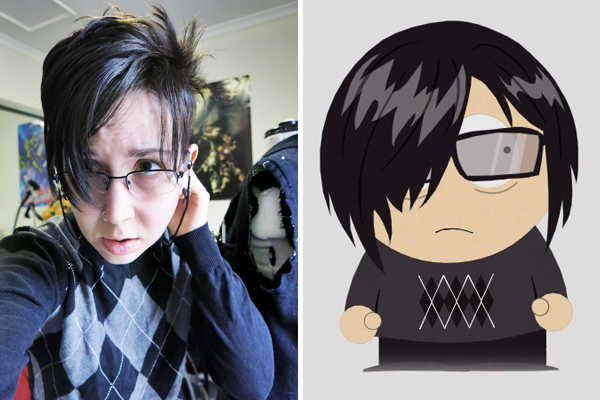 People who fucking love argyle: Me.

Now, something I’ve been considering, is how the appearance of the character would affect the interpretation of what is going on around them. Because my character looked incredibly traumatised the entire time- and I wonder, without the “I am hiding from you behind my shitty haircut” hair, or without the sleep-deprivation bags (or eyeliner to cover/enhance them) would he have come across less awkward? Add to that the fact that your character doesn’t talk; and I mean: Does. Not. Talk. Not even through the aid of text prompts and assumptions. There were instances where I honestly felt really awkward while people attempted to engage him in conversation and I… I genuinely felt bad for him?

Bear with me, this is difficult to describe.

My interpretation of the situation, with this visibly sleep-deprived mute, was that he was still recovering from a previous trauma (and the narrative certainly served to enforce that interpretation) when he gets thrown into all this convoluted bullshit and… 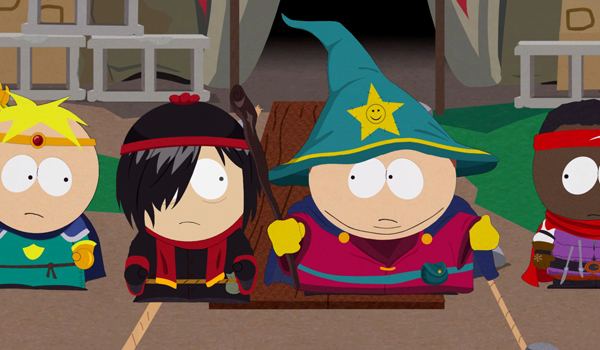 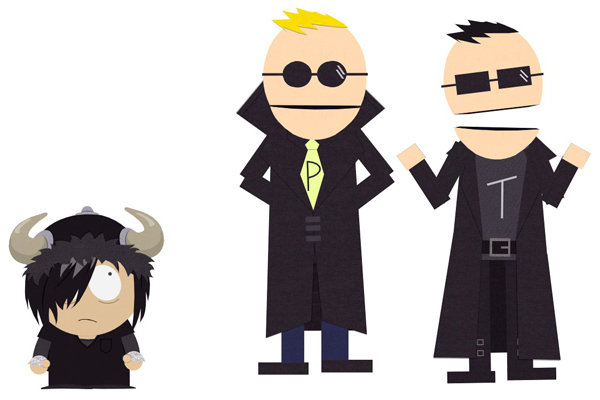 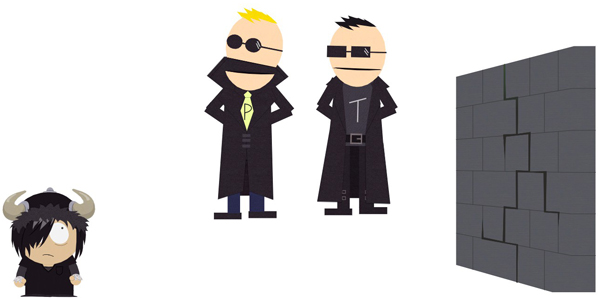 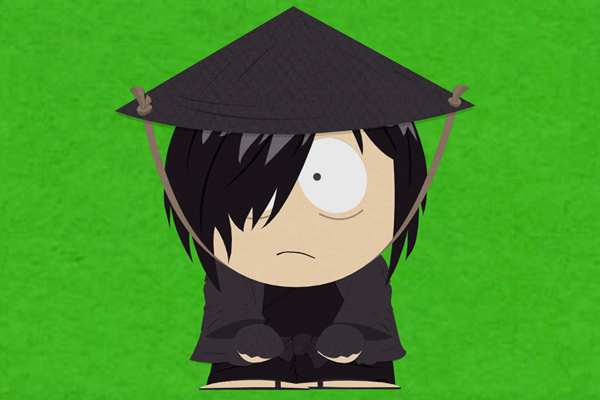 Oh dear god kid, I am so sorry! 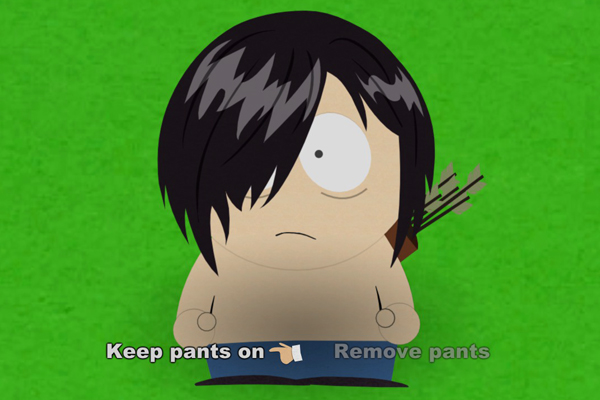 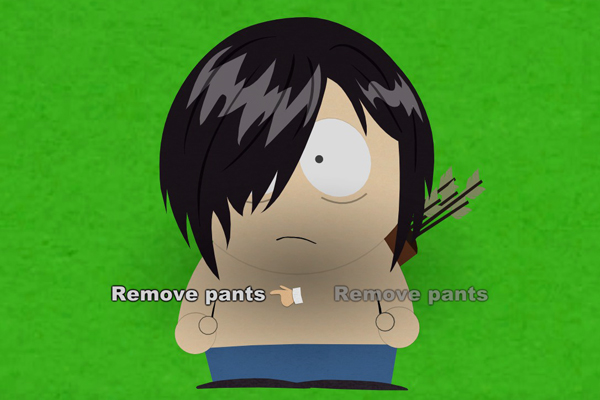 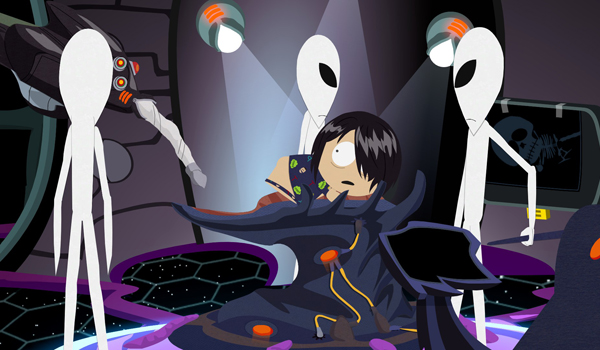 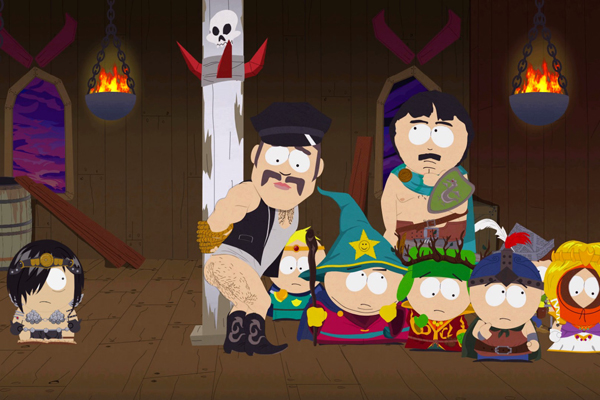 How could anybody willingly put you through all this?! 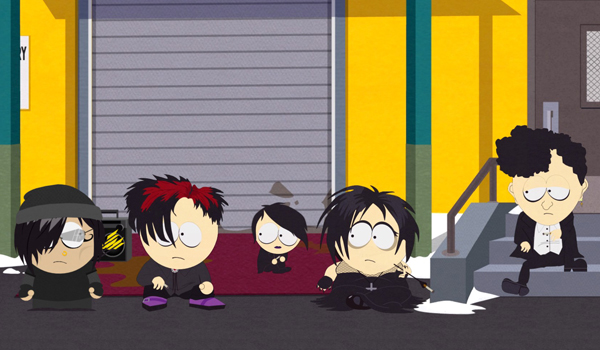 I can feel your pain.

It really enhanced the experience.

It sort of goes without saying that a pre-existing familiarity with the South Park world and characters will give you a much deeper appreciation for the obvious love and dedication which has been poured into this game. 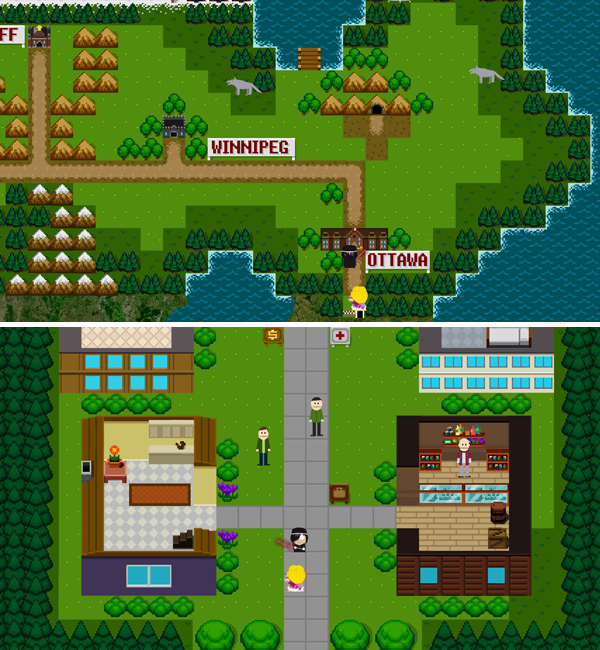 Despite everything that happened, the thing which really destroyed me was the trip to Canada. At that point I actually had to go and sit outside for a while before continuing.

The town feels so alive; random NPCs acknowledge you as you walk past and react to being hit- even if you can’t directly engage them in combat. If a party member is accompanying you they will react to the environment and talk to you about inane shit, or get annoyed if you’re being slow or distracted or doing the wrong thing. There were even instances of them reacting when you destroy environmental items (and there were quite a lot of destructible items around)!

In particular, where party members are concerned, I was impressed that they never got stuck, or trapped, or in the way, or randomly die on obstacles only to regenerate from some random unseen location. If there was an obstacle to pass and they didn’t run through when you did? They wouldn’t keep trying and failing to pass it; they’d wait until it was safe to do so and follow you unharmed- little details like that which would be so easy to overlook (and frequently are, to a point that people are often willing to accept it as simply being how games are) really impressed me.

It would have been easy to cast an existing character, even to throw in some sort of voice or text-prompts for your character, but instead they let you have your own character, without any sort of presumptuous dialogue, and it all comes together brilliantly.

Seriously though, Princess Kenny really is the fairest maiden in all the lands.

A lot of the time I just don’t bother with videogames which are based on shows or films because a lot of the time they’re flat out terrible (a similar issue often being faced by films based on videogames). It is glaringly obvious when something is simply an attempt to milk more money from a franchise, rather than because they’ve put adequate thought into how it can be successfully achieved.

But it can– and we all know it can!

With the right people, with willingness and dedication, and you have to wonder why these things are so frequently ignored? When a quality product has the potential not just to slap a grin on the faces of old fans, but win over new ones too; why do companies still choose to rush these things? Do they really have that little respect for their customers?

What I’m trying to express here is unbound joy, enthusiasm, and respect that this project was achieved to such a high standard, despite all the setbacks and occasional worries that it wouldn’t eventuate at all.

All in all?
This isn’t even a review because that would imply an unbiased opinion. This game vastly surpassed my expectations so I’m just kind of flustered and gushing right now.
10/10.
Would bang play again. 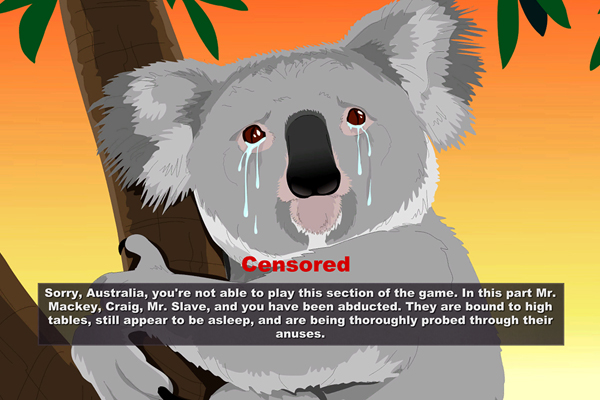 Australian censored screen for South Park: the Stick of Truth.

Censorship is a very touchy subject with me. Living in Australia I’m willing to tolerate it to a certain extent, and purchased a legitimate PC copy of SP:tSoT through Steam.

My first play-through had the censorship firmly in place, and while the censored screens were a little jarring if you enjoy immersing yourself in games, the crying koala and condescending nature of the detailed text descriptions were admittedly, pretty funny, and I appreciate where they were going with that.

Right up until I realised the zombies had no voice clips.

At first I assumed the zombies were just being quiet because they were dead; but then got up to the zombie-foetuses who all seemed to have voices, after which point I realised all of the zombies mouths moved as though they were supposed to be talking? So I figured maybe it was a glitch or something and went to look it up.

At this point I discovered that the zombies had, in fact, been censored (there was some degree of conflicting information here; it may only be the PC version missing the zombie voices, console gamers didn’t seem to be faced with this issue). It came across as inconsistent and hypocritical that some zombies were censored while others were not. It also came across as dishonest; all of the other censored material featured some sort of prompt explaining the situation, while certain types of zombies were just inexplicably silent with no clear reason as to why.

This was the tipping point in which my hand slipped and removed all traces of censorship- and surprisingly enough, on playing through uncensored, nothing in the game was any worse (graphic, gratuitous, disgusting, or generally offensive) than what you’d expect from the show.

This experience has served only in furthering my confusion as to how exactly videogame censorship works in this country.