We recently talked about the Asylum being one year and ten years, which got me looking for any backups left around, even going so far as to try my luck with the Wayback Machine; while there were some snapshots of one of the early versions of the site, all of the images (and many of the links) were unfortunately broken.

Remembering the Asylum was used as a part of my interview folio for tertiary education upon finishing highschool, I had a search for the disk, without much luck. With so many books it may have been tucked into, paired with the fact I’ve moved house since then- it may have been straight up thrown out, or still be somewhere in my parents’ house- for the time being it feels like a lost cause.

Father is disappoint with my inability to reliably maintain such important historical records.

All said and done, I was able to locate a copy of the most recent version prior to the domain change: 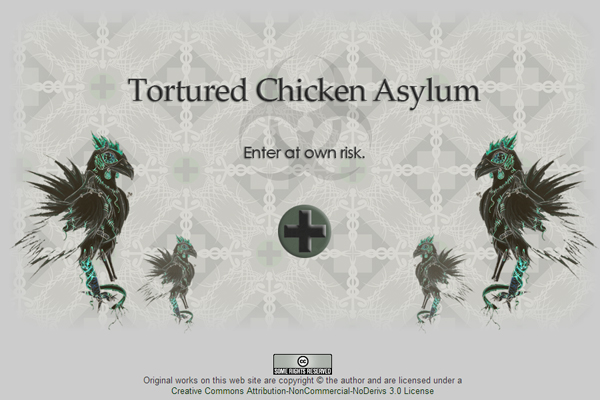 For whatever reason, the index page was always this sort of… entry thing. A feature which has since been scrapped.

Kind of half-joke half-covering-my-ass in the off chance that anybody who actually visited the site managed to take some of the more… unsavoury aspects too seriously. Was it any more or less unsavoury than it is now? Difficult to say.

These days I have much less internalised hatred and am trying to curb my swearing. But the content of some of the pages in the Gallery, containing many- if not all- of the same images as have been there for the past ten years, is still indisputably ‘R’ rated.

The navigation page shows us that the aesthetics of the site are actually not too dissimilar; aside from the very dated HTML tables and using the traditional version of the chicken, rather than the digital re-draw (as the re-draw had not yet been created at that time).

Previous versions had all featured the same table-layout much less attractively, as I wasn’t really settled on a ‘theme’ as such- even the Tortured Chicken drawing itself was created independently of the site.

When starting out it was called “Koneko’s Lair” and (poorly) attempting something of a more Gothic appeal- that is; “Gothic” in the self-hating teenage-angst sense of the term. However, I also wanted my characters, particularly the winged dogs, to feature heavily and… this? This attempt to describe it right here? This is exactly why I’m sad about the shame driven destruction of the backups.

Fully embracing the Tortured Chicken (a name originally suggested in jest by one of my uncles) and going for the more sterile aesthetic of an “asylum” theme didn’t happen until the second-last iteration prior to the move, around 2008 or ’09.

Similarities appear to continue in the Gallery page, where we see the scroll-box. This was the main difference between the second-last and final versions; the second-last (and all prior) did not feature scroll-boxes, resulting in many of the pages dragging on far too long (adding heavily to the horribly dated feel of the site).

But this is where things get really bad-

The pages within the gallery were woeful, never quite matching the aesthetic of the rest of the site.

Lists of 20 images per page with boring, sometimes long-winded, often irrelevant descriptions accompanying each image. Reading them even now still causes me to cringe with second-hand embarrassment.

You couldn’t even navigate between the pages of any given category, you’d have to return to the main gallery page and- don’t even get me started on how for a longer time than I’m willing to admit each image was contained in its own HTML file because the FTP management I was using at the time was so incomprehensibly bad I honestly thought that was how images were supposed to be displayed online (unbeknownst to me, it had even been uploading multiple versions of the same pages when capitalisation of their file names had been changed).

Back then I thought it was the high resolution images annihilating the allotted data, when in reality, while that was no doubt a large part of the issue, having multiple copies of several pages- and being unaware that unused pages had to be specifically deleted (rather than intuitively realising they were no longer required)- was not exactly helping the issue.

It never seemed worth the hassle to fix the Gallery because by the time I admitted there was a problem there were so many pages I simply couldn’t be bothered. That’s the fun of working solely in HTML- you have to update every single page individually. Having a few common layout files (such as CSS) makes the whole process so much easier, because when you break something the same thing is broken on every page! Thus removing much of the guesswork.

The gallery is by no means perfect, even now (lazy loading? No, nope, that doesn’t sound like a promise I’d make…), realistically nothing ever is, but that’s a whole other existential crisis. It’s simply more functional and less ugly than it used to be. That and, y’know, consistent aesthetics.

I hope you have enjoyed this shameful trip down memory lane with me. Admittedly I do feel simultaneously relieved and disappointed that the original Asylum is unlikely to be backed up on any dusty old hard-drives anywhere.

It’s time to look at something fresh and new, albeit unrelated: 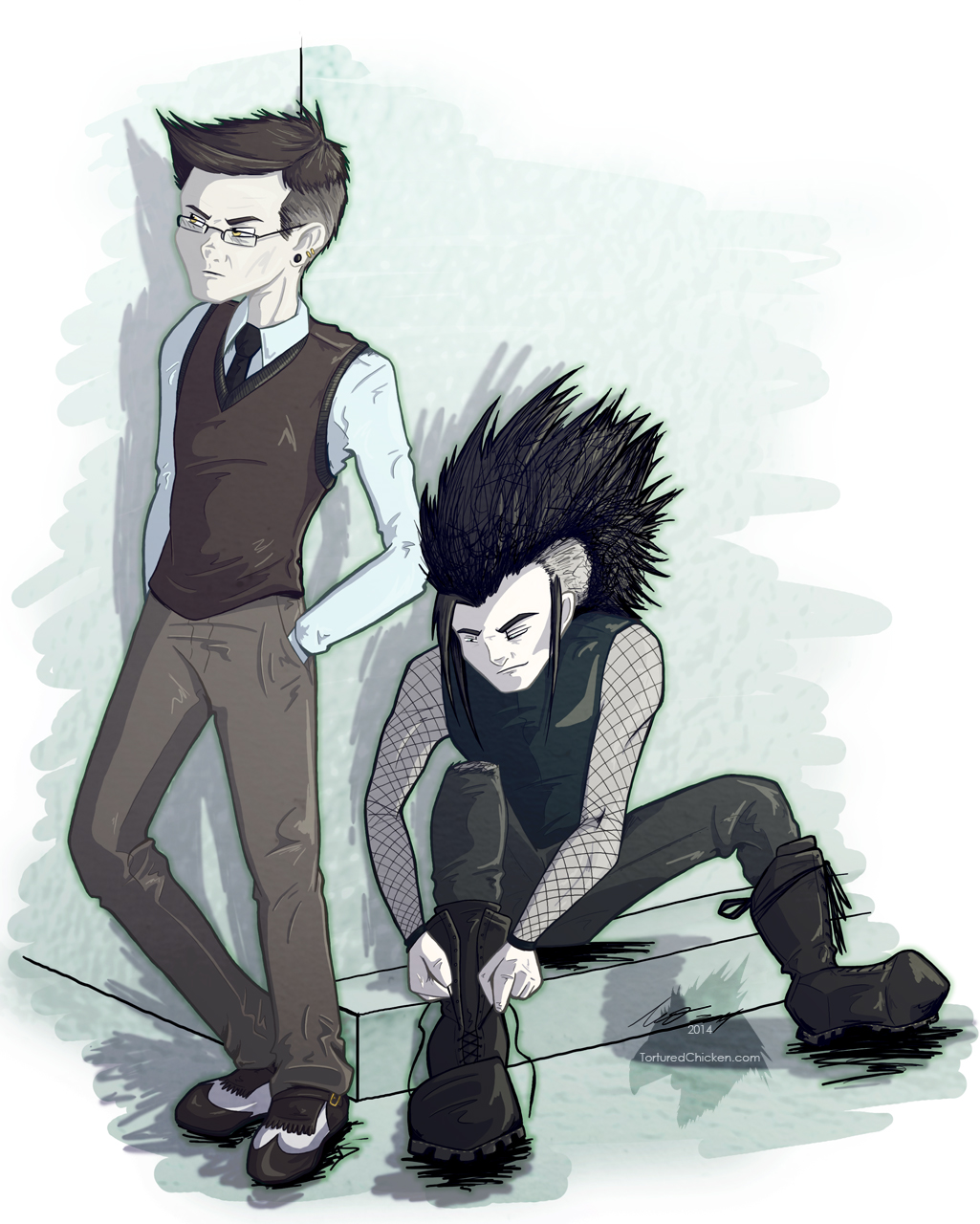 Inspired by shopping for clothing in the children’s section because most western menswear brands don’t cater to those of petite build.

When the Asylum actually celebrated its anniversary I was far too busy to actively celebrate. Then I was unsure if website anniversaries are even something people willingly celebrate at all?

Part of me had been joking about downing that bottle of sake I’ve been saving, but somewhere along the lines Sunday was assigned as the most convenient day to get a few people together. Sundays aren’t a good drinking day unless Monday is a public holiday.

Or you have no discernible responsibilities. 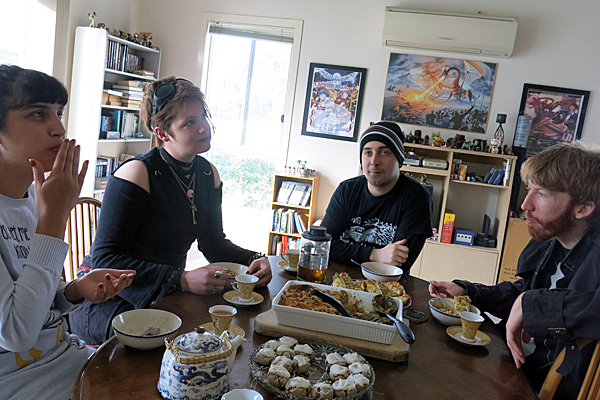 From the perspective of my liver it is probably never a good time to be downing entire bottles of sake.

We had a late lunch which became an early dinner and people mostly dressed to bring out their inner mall-goth. The mall-goth theme keeps me grounded, I embrace the truths of my past (aside from maybe that self-hating plucked eyebrows and red lipstick internalised-misogyny phase, but that came later).

As a thematic end to the night we watched the Crow and at some point I even coloured in my nails with black marker like a true mall-goth. It was nice. Sometimes I wish I could go back to the days of picnics in city parks, endless wandering, and late night sleep-deprived ranting on instant messengers. Nostalgia leads me into believe life was better back then. Realistically it was probably about the same, just in different ways. 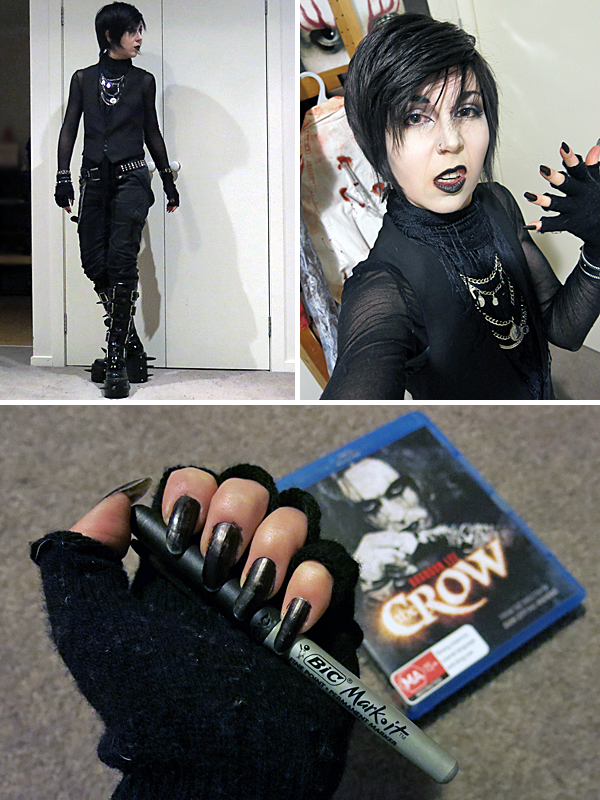 MaEmon left a copy of the infamous “Saucy Fanfic” in my custody. The topic hasn’t actually come up on the site since the move, it doesn’t come up too often these days despite what a defining aspect of our highschool experience it was.

At a later date I will copy out and edit what I’ve been given, for a post here, and explain it in a little more detail.