No time to unwind after returning home from the brief holiday last week, I had 3 days of work to catch up on, weekend plans to rearrange, and a convention to prepare costumes for.

Last year was the final Manifest. It felt sudden to me, but who knows how long the staff had been considering shutting it down? At this point though, that’s all old news. Many attendees of Manifest had speculated that perhaps something else would kick off to fill the void.

This was not an incorrect speculation to make.

It looks like CHAOz (Cosplayers, Hobbyists, and Artists of Australia) is set with that very ambition in mind. It’s even held at the Melbourne University grounds (the location where Manifest initially began) and everything!

The day before departing on holiday I’d pre-booked my ticket using the online system CHAOz had set up. Being the first year they’ve run there were no discounts for pre-booking nor an option to have the passes mailed out (though there were varying prices based on concession status), mostly I just decided to pre-book so it wouldn’t be a hassle to collect on the day if queues were long or the EFTPOS was playing up.

On Saturday I was exhausted. No lie, a big lazy part of me wanted to go back to bed and stay there forever. But I managed to drag my sorry ass into the shower and don a stealthy Dave Strider (from Homestuck) to head into town.

If nothing else, the thought of collecting StreetPasses on my 3DS was a big motivator. 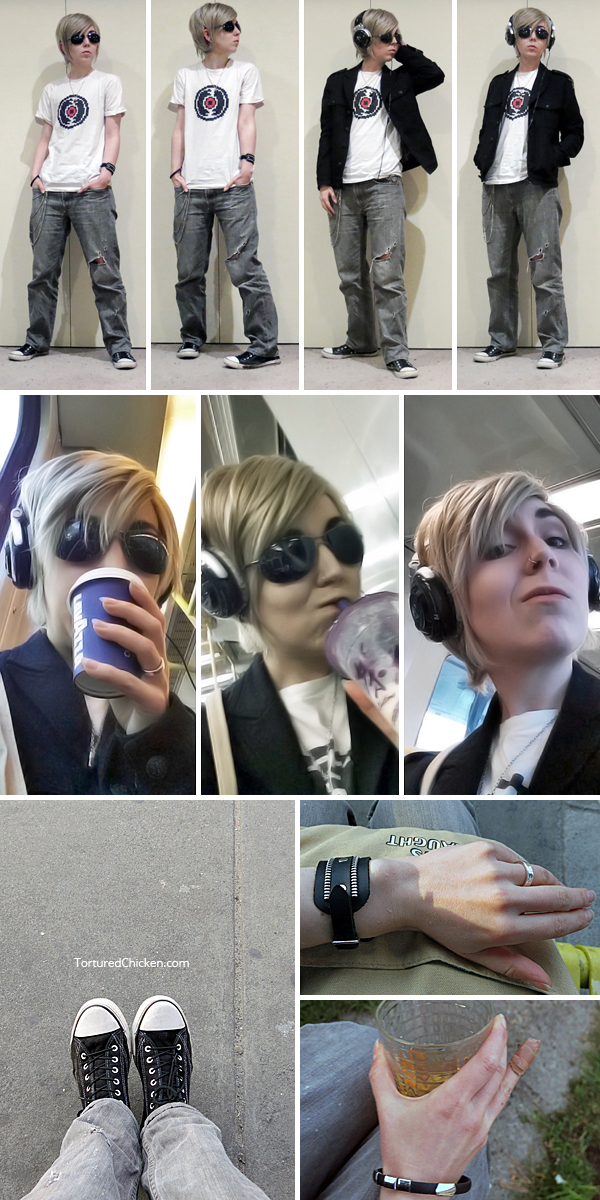 Dave dresses kind of how I dress anyway, so with a bit of jewellery and my favourite Jack London wool jacket nobody unfamiliar with the character would be likely to pick up on the outfit being cosplay trash.

A few reasons why I didn’t go all out with costumes on Saturday; none of my usual cosplay bros could make it, so I’d be on public transport alone, and also had to get to a party afterwards but didn’t want to waste time going home to get changed first.

But that’s neither here nor there.

First impressions of the con were that it was small, busy without being crowded, heavily cosplay and hobby focused (as the name implies), and I really liked how they handled the ticketing system- each pass featuring a QR code on the back which was scanned on tablet computers to enter the convention areas. 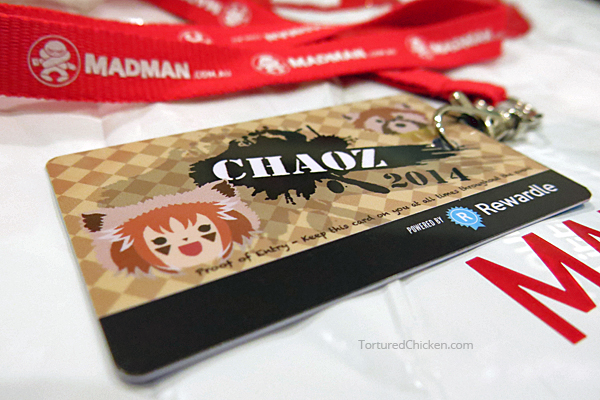 Tickets were plastic cards supplied with lanyards to be worn around the neck. Mine had a Madman branded lanyard (no doubt they were a main sponsor for the event), though not all attendees had these, they may have only been for people who pre-booked, had two-day passes, or perhaps they simply ran out.

The staff (and/or volunteers) were all very friendly and helpful, as were the handful of attendees I spoke with during my time there. Though there are really very few negative experiences I’ve ever had with conventions in general, so there’s that.

On Sunday morning I headed over to MaEmon-knows place, met up with a couple of other chums, and had a neat little Resident Evil group, more or less based on the Code: Veronica game, with MaEmon as Steve Burnside, Clifty as Chris Redfield, and myself as Claire Redfield, having made some alterations to that costume in lead-up to the con. 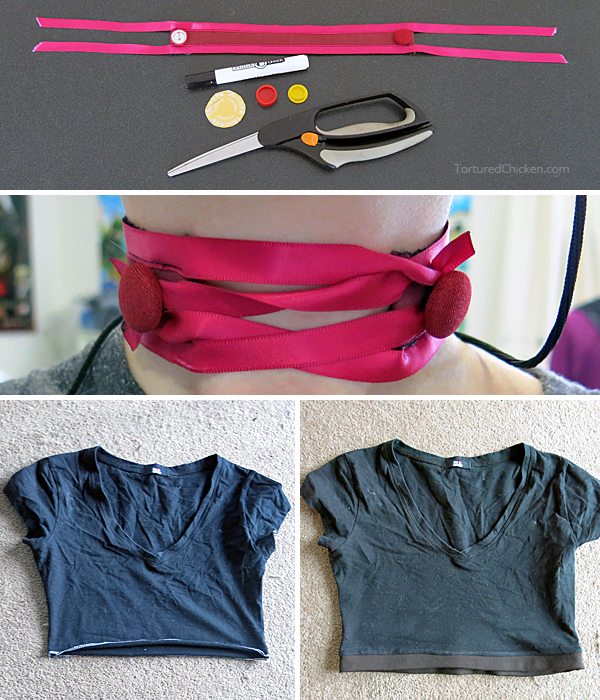 Namely unpicking the hem of the black top and redoing it with binding (as it was altered quite some years ago now and I’d done a bad job), plus adding buttons to the choker which the ribbons now loop around, rather than tying (as there was some issue with the knots coming undone).

Don’t even talk to me about the light-up prison-tag-collar MaEmon made for Steve that thing blew my mind so hard I still haven’t gotten over it.

At some point we even managed to get our shit together enough to actually go to the convention, Clifty generously driving the rest of our lazy asses down there. 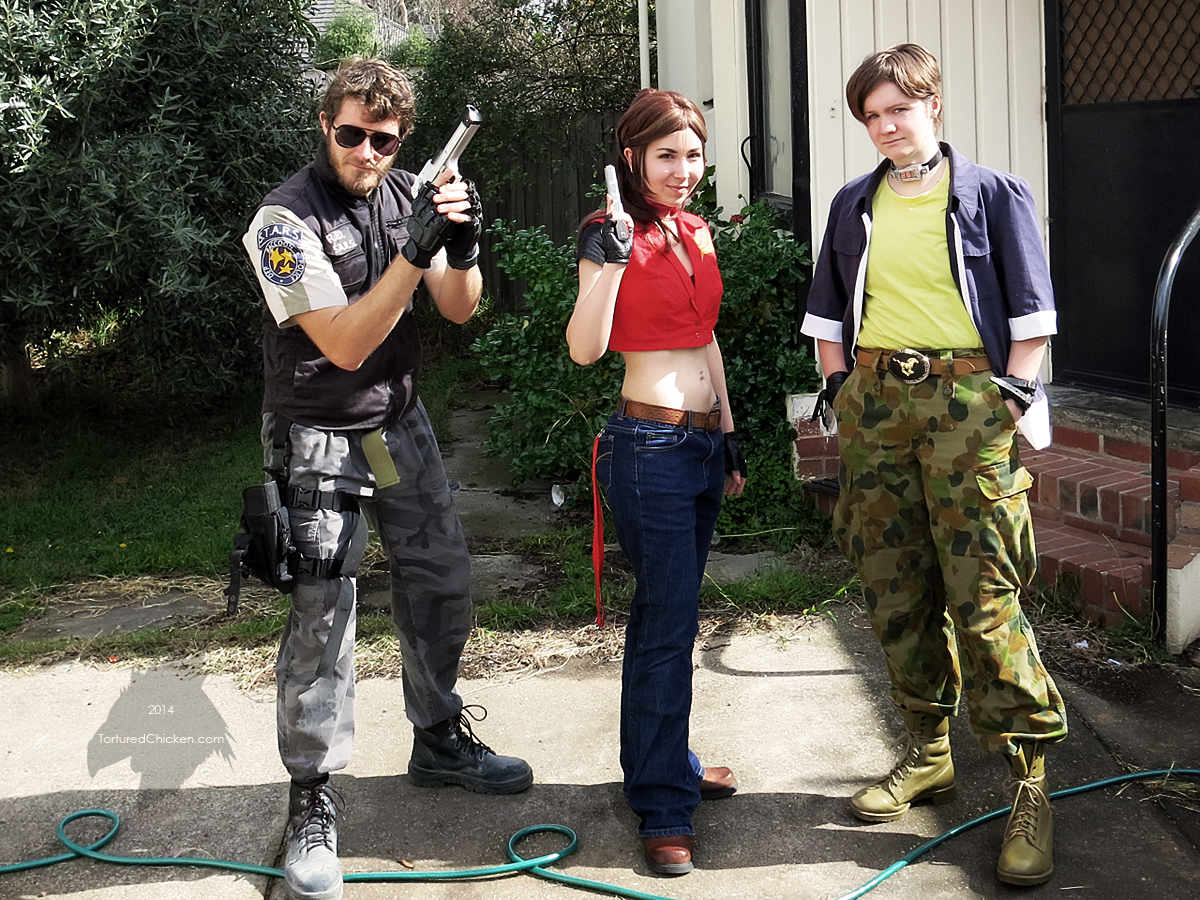 Our group in costume shortly before heading to the con.

Clifty’s Chris costume was a bit last-minute, but between the three of us we somehow had everything necessary for a close-enough closet-cosplay.

The patches on the shirt and vest were drawn up with vectors, printed on transfer paper, ironed onto cotton shirting, and loosely stitched in place.

Were the garments more screen-accurate to the character I’d have attached them more permanently, but as it was we were borrowing a shirt from Tech Support and I don’t want to commit my tactical vest to a specific costume just yet (speaking of; I don’t even know how Clifty managed to squeeze into that thing but he did). 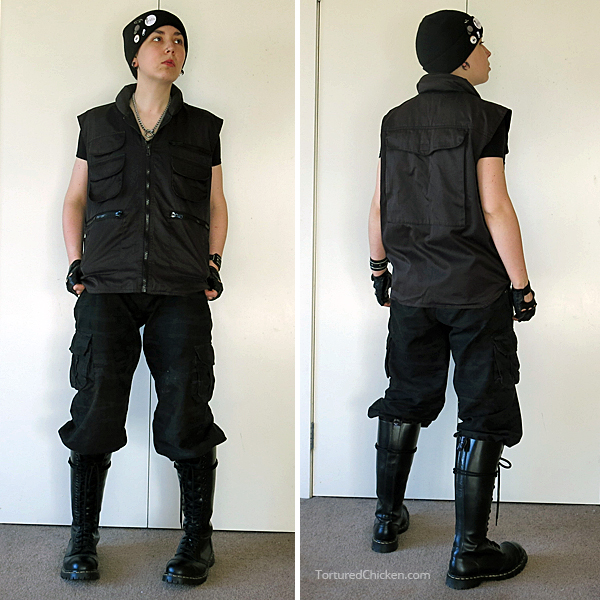 Like, it’s a little big on me, but not impractically so.

Thankfully the only comments we got regarding screen-accuracy was one guy accusing Clifty of being Barry Burton rather than Chris Redfield due to his beard. So we did pretty good in the end!

For anybody who is interested, high-quality versions of all of the transfer patches I’d drawn for these costumes are available in .PNG format from my Google Drive.

We had a great day getting our StreetPass fix and even got some really good photos courtesy of the generous assistance supplied by Thomas (who doubled as a ‘generic-zombie-survivor’) and Elizabeth. 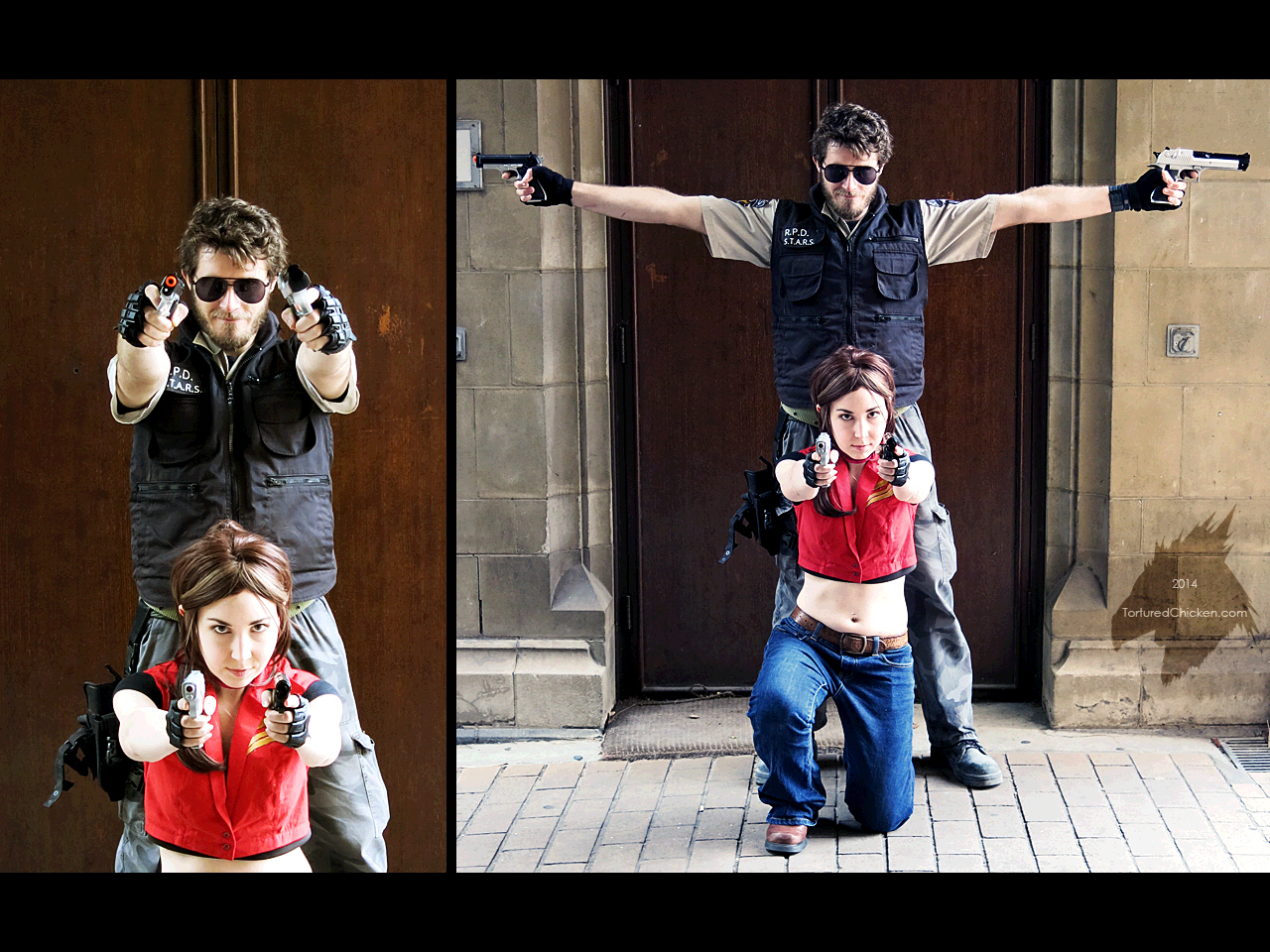 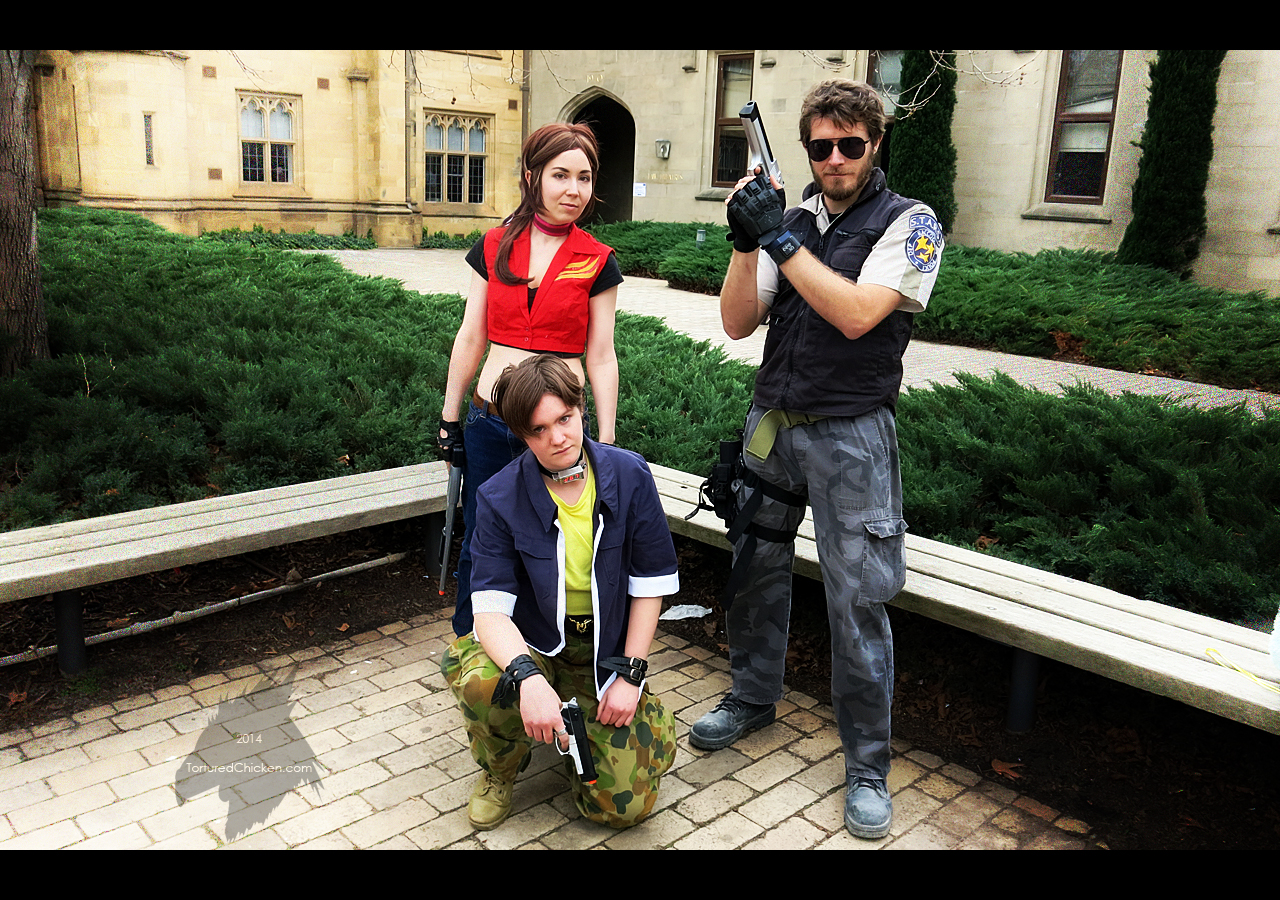 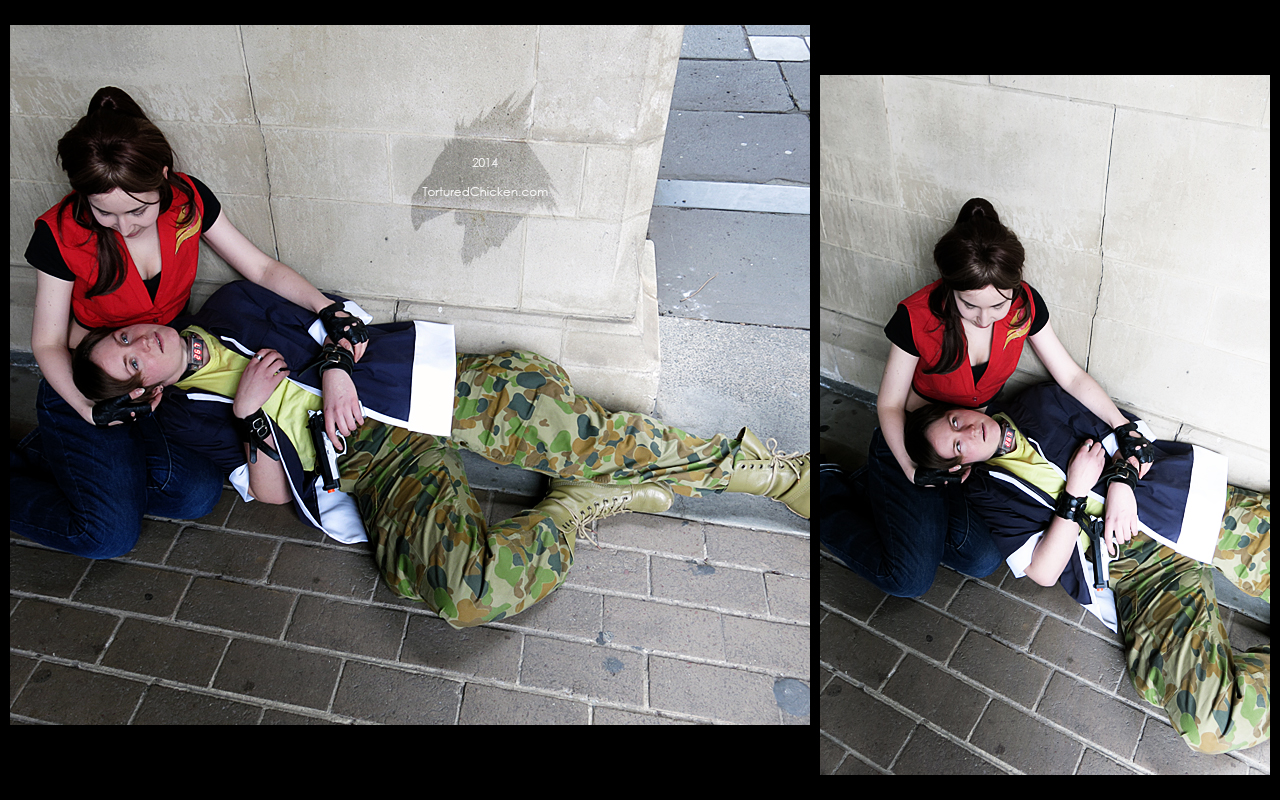 Group photos taken during CHAOz. You can find more on the Cosplay and Photoshoots page in the Gallery.

Feeling loopy and sleep-deprived the part of me that is actually six-years-old was unable to resist the call of those AlPacasso Fresh plushies. Naturally I grabbed one of the large size ones. More mass means more to love, right?

MaEmon, on the other hand, saw nothing but fan-fiction writing prompts in this turn of events. Something about Steve and Claire going out on a date to the carnival and that trope where somebody wins a big stupid plush toy for their partner, so that’s why Claire had a gigantic blue llama, only their date is super awkward because Claire’s weird brother tagged along for some reason. 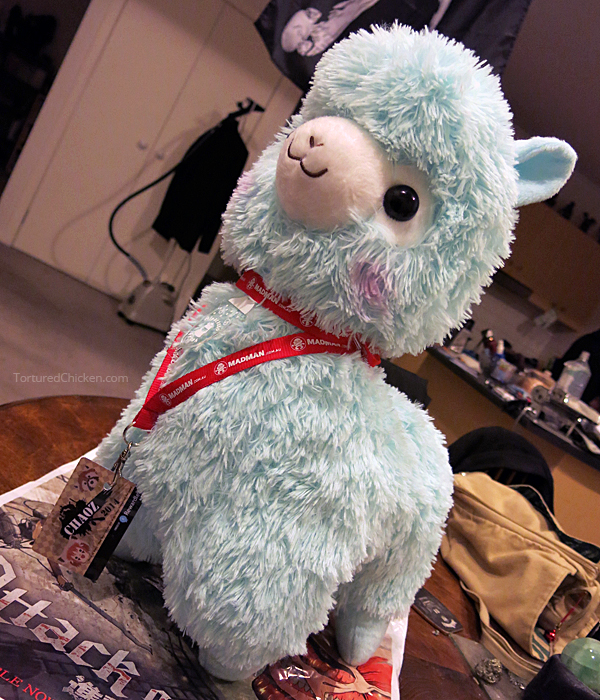 Every so often MaEmon would whisper something to me in-character along the lines of: “Seriously Claire, why’d you have to bring your brother along? He’s such a freak.”

The real hero of the weekend was Nintendo 3DS (and 2DS) StreetPass, because there was certainly no shortage of random peoples Mii characters to collect, let me tell you! Half our time was spent stopping to check our consoles for passes and getting comfortable near crowds to ensure we got as many as possible from people walking past.

One of the CHAOz staff members even offered to snap a photo of our group with our consoles out. 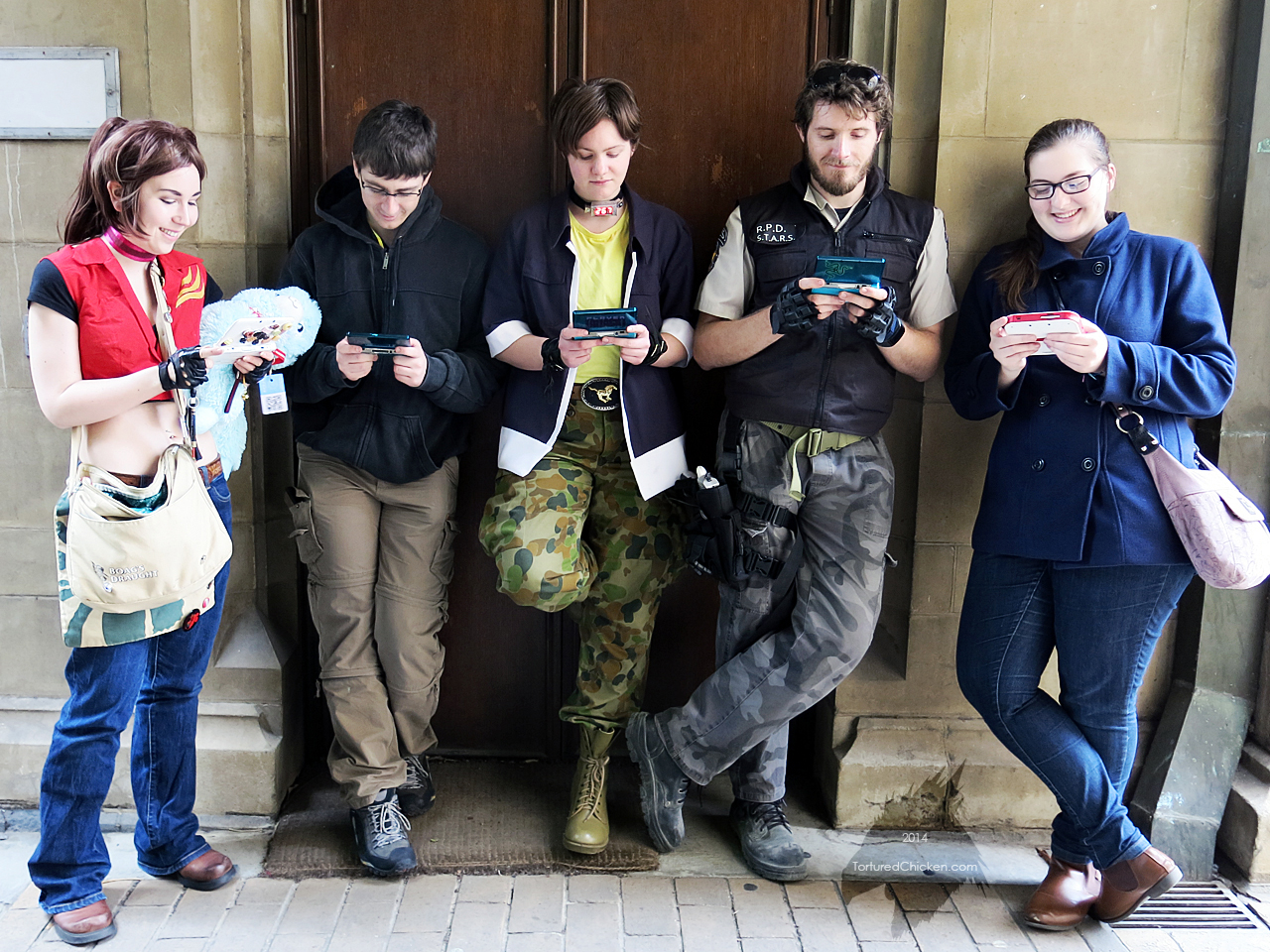 Dude, I didn’t catch your name, but seriously, thank you so much for that, this photo is so important.

After the con MaEmon and I ditched some of our bulkier and more conspicuous items in Clifty’s car before wandering the CBD for a while; stopping in at Daiso, getting a coffee, and generally catching up on life.

Somewhere between coffee and jumping on the train MaEmon even obtained a pet rat. 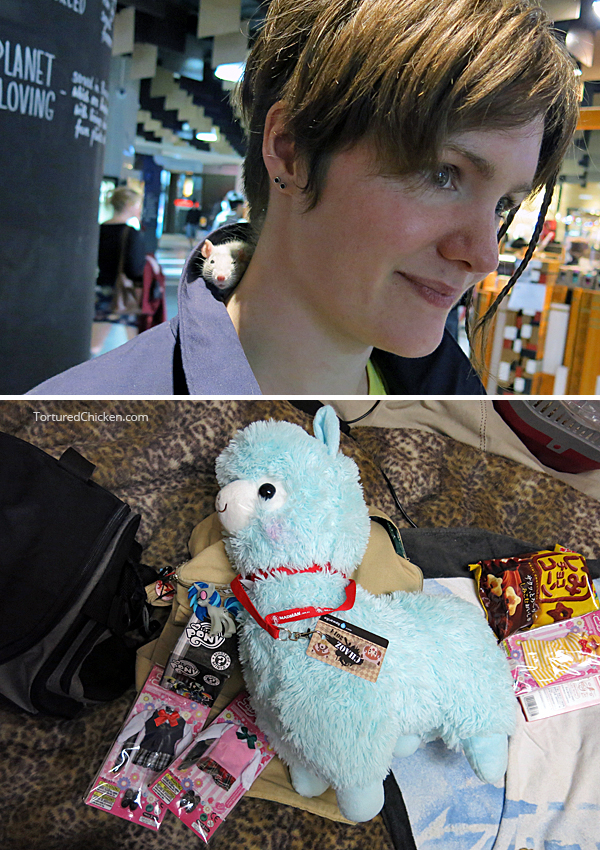 The spoils of war, now with live rats.

Aside from the Alpaca, I also purchased a Funko My Little Pony “Mystery Mini”, and a handful of doll clothing from Daiso.

Regarding the mystery pony, I was pretty stoked to get Vinyl Scratch/DJ P0n-3 out of it. Even more stoked that she glows in the dark! 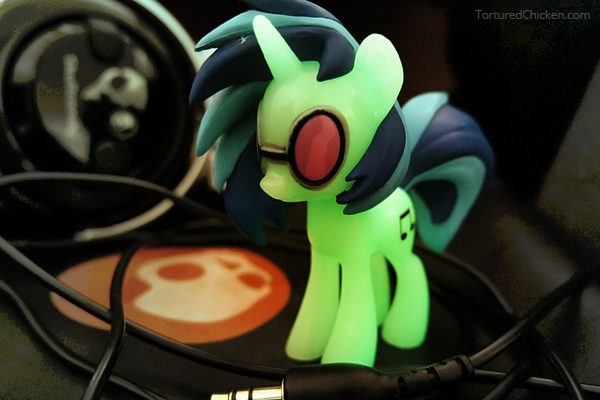 Which was surprisingly difficult to adequately capture on camera without a black-light.

Eventually I made it home- just in time for dinner no less- and passed the fuck out from sheer exhaustion.

All said and done: CHAOz was a fun convention and a solid foundation from which to build. The hobbyist focus appeals to me a lot more than celebrities do- besides, there are already plenty of cons with that aspect more than covered, so it was very refreshing to attend something community oriented and I sincerely hope they’ll do it again next year.