On the second of November Tech Support and I headed into town for PAX Australia 2014.

Last year was the first time PAX opened their doors to an Aussie crowd, and they must’ve liked it down in Melbourne since they came back for round two.

While I have dreamy ideals of booking out luxurious hotel rooms and attending the full duration of the convention at some unspecified time in the future, this year just wasn’t a realistic option between pretending I know how to be a responsible adult and trying to maintain an illusion of well structured priorities.

That aside, the one day I did manage to attend was pretty great. 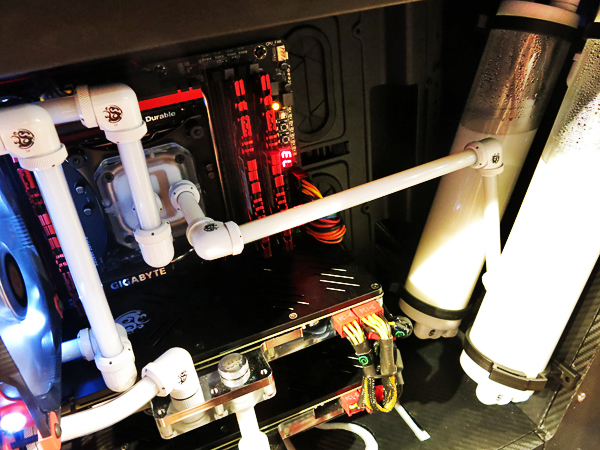 This computer is full of milk and nothing can convince me otherwise.

Tech Support and I drove in early to have breakfast and coffee at Crown before heading over to the Exhibition Centre pretty much as soon as the doors opened.

It was a good thing he’d double-checked the location too, because my brain is scrambled eggs and I’d just assumed it was going to be at the Showgrounds again. How glad I was to be wrong! 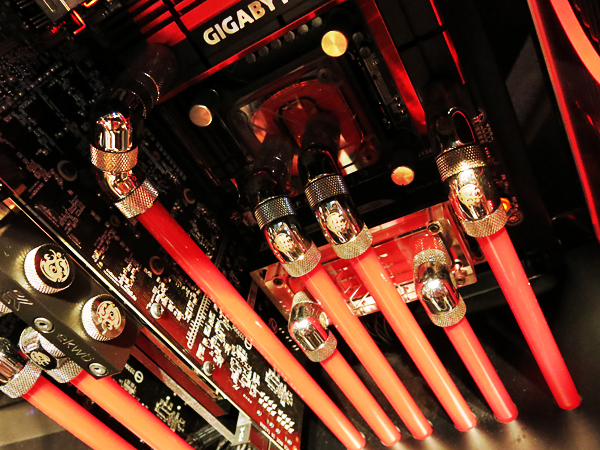 Computers as aesthetically pleasing as they are functional is a craft I can appreciate.

The Showgrounds have always kind of ruffled me the wrong way where conventions are concerned for a number of reasons:

The Showgrounds can absolutely be handled well, it’s just that they’re usually not, which makes me not tend to bother with certain events that are held there- save for a small level of convenience if I’m staying with MaEmon, who lives near to the grounds. 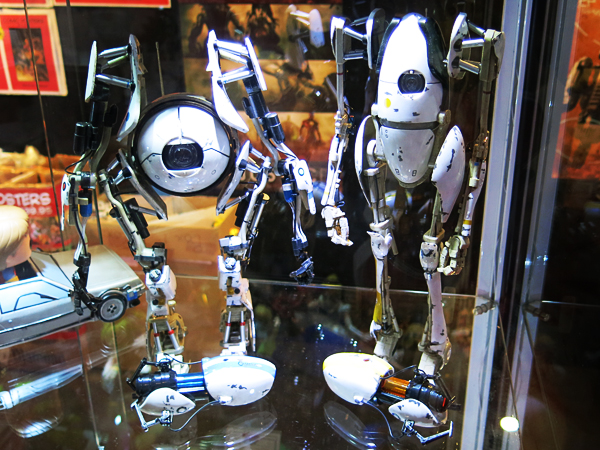 No, the Exhibition Centre is all about my jam.

There are numerous train stations within walking distance, several tram lines that stop right outside, ample secure parking lots who’s rates can be easily checked online prior to getting there- plus, being in the CBD, if you need a break for food or coffee you can just go for a little walk outside and find exactly what you need. A perfect location if ever there was one!

They seemed to have most of- if not the entire Melbourne Exhibition and Convention Centre booked out, including the Polly Woodside Tall Ship docked outside (from the impression I got, the LARP groups were battling it out on the ship).

With so much space in the buildings it didn’t even matter if the weather was bad, as the vast majority of the convention was securely housed indoors with nary a tent in sight! 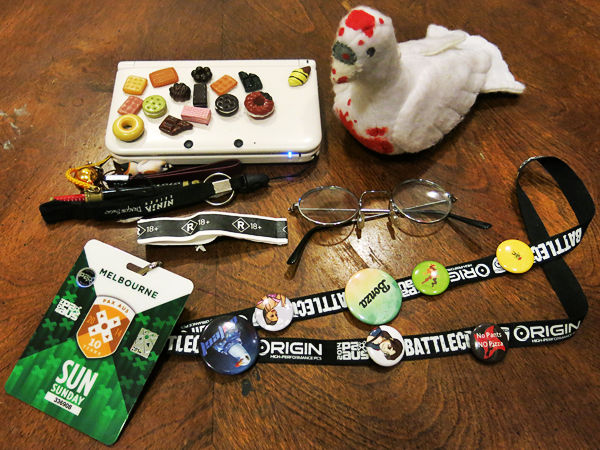 Relevant items from the day.

Queues were handled well; though the ticket pick-up lines seemed long at a glance, they moved swiftly thanks to the organisation of the attentive staff and volunteers. The staff were amazing too, so helpful and enthusiastic- come to think of it; everybody in attendance seemed to be in good spirits? Sure, some were tired, exhausted even, but I don’t think I saw one person who appeared to be having anything less than a splendid time.

Same as last year, identification was checked on entry with wristbands dealt out to identify those over and under the age of 18 (this minimises queuing for R18+ areas, as people need only flash their wrist rather than digging around for their photo ID). 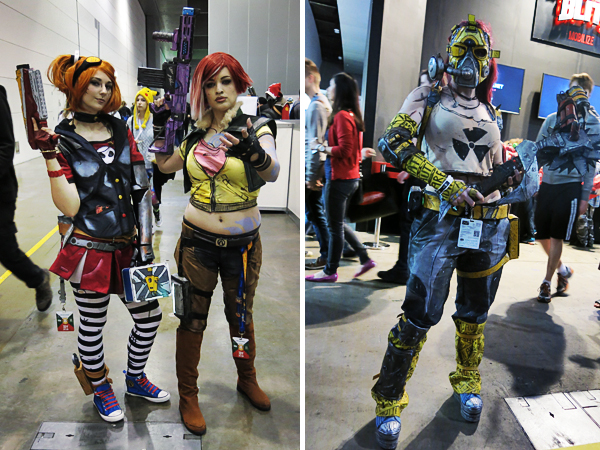 Borderlands fans were bringin’ their A-game.

After picking up our tickets Tech Support and I parted ways, he to checkout PC gaming, while I went to locate MaEmon.

Tech Support wasn’t keen on cosplaying, but MaEmon and I had donned some TF2 for the occasion- she as the Spy and Myself in the waistcoat version of the Medic, with Archimedes pigeon plush, both of us RED team. 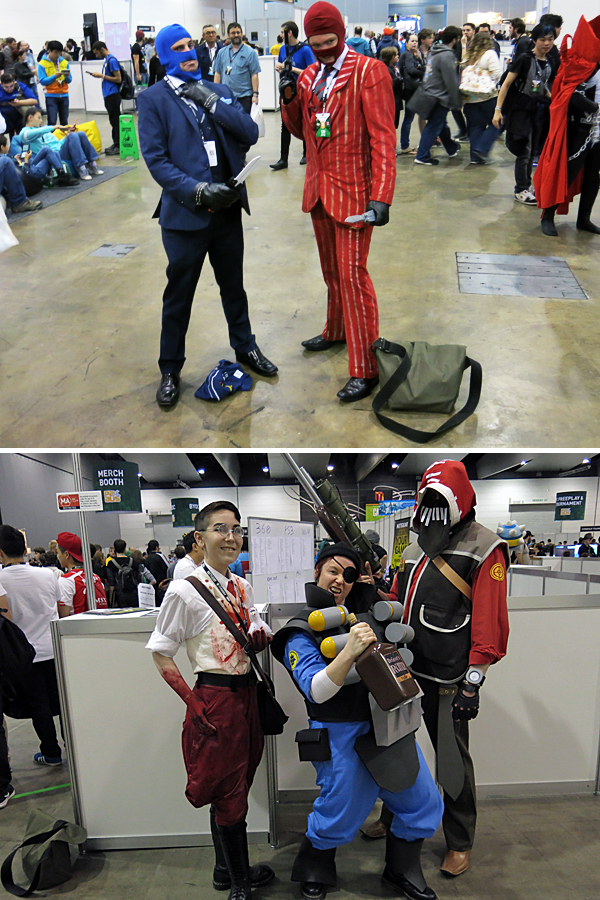 Getting some TF2 on with other cosplayes around the con, including BLU Spy, BLU Demoman, and RED Sniper.

My Medic had been updated for the occasion; waistcoat taken in, more blood added, new grey covered buttons, the bloodied armsocks I mentioned a few weeks ago, shoulder-pads slipped into the shirt, and new red Jodhpurs style trousers!

Hand-crafting my own costumes is really all about dictating how many pockets there are, how big said pockets are, and where they go.

The Gripfast boots really go with the new trousers too, and earned themselves more than a few compliments throughout the day! For anybody curious, they’re black leather, 20 eyelet, steel capped, and do not feature zips. 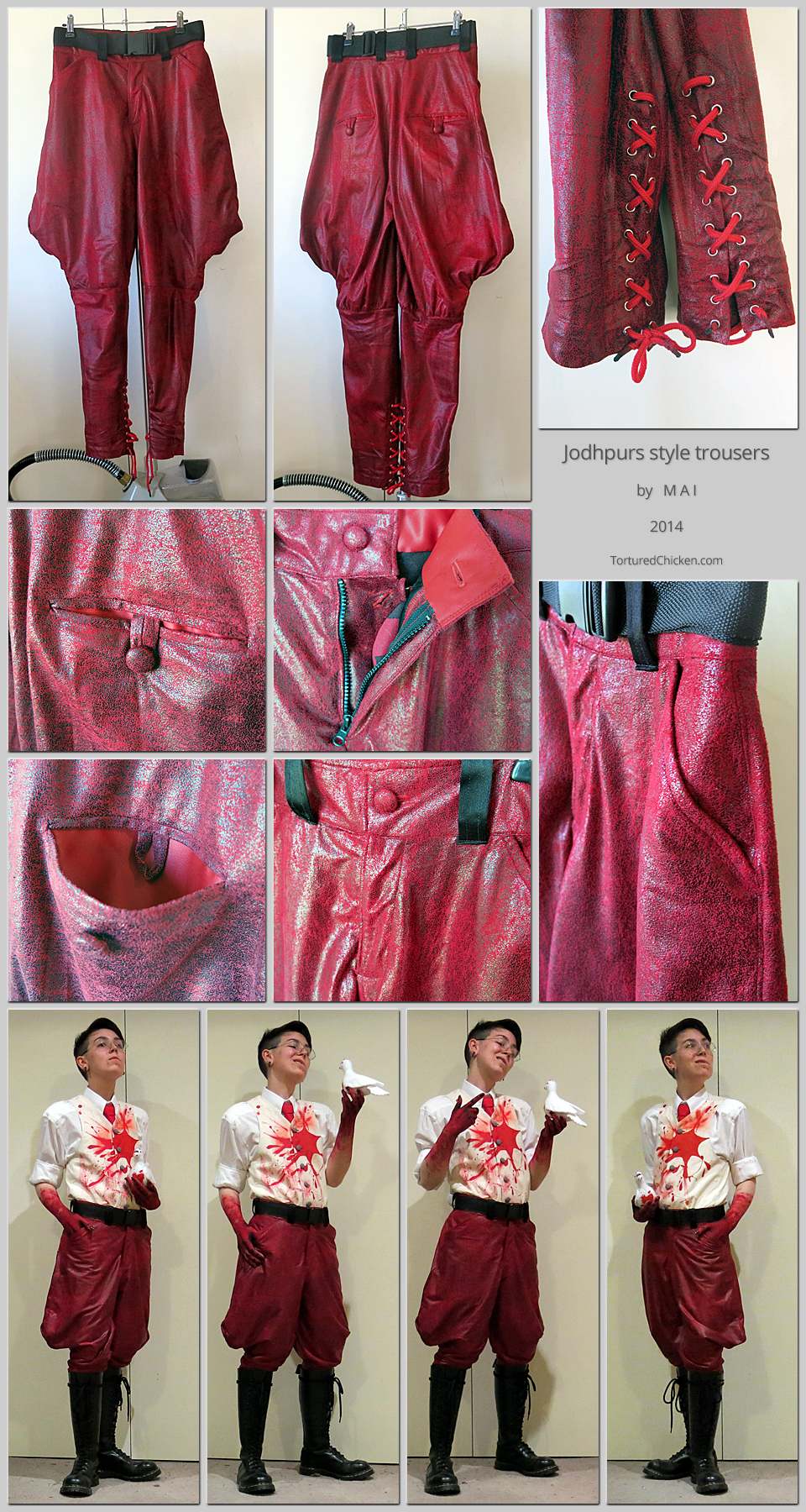 Throughout the day I was mesmerised by the custom PC’s, cruised through the indie games, took plenty of photos, had plenty more taken of me, met and spoke with so many other cosplayers, and crashed out in the beanbag filled Handheld lounge for 3DS Streetpasses. 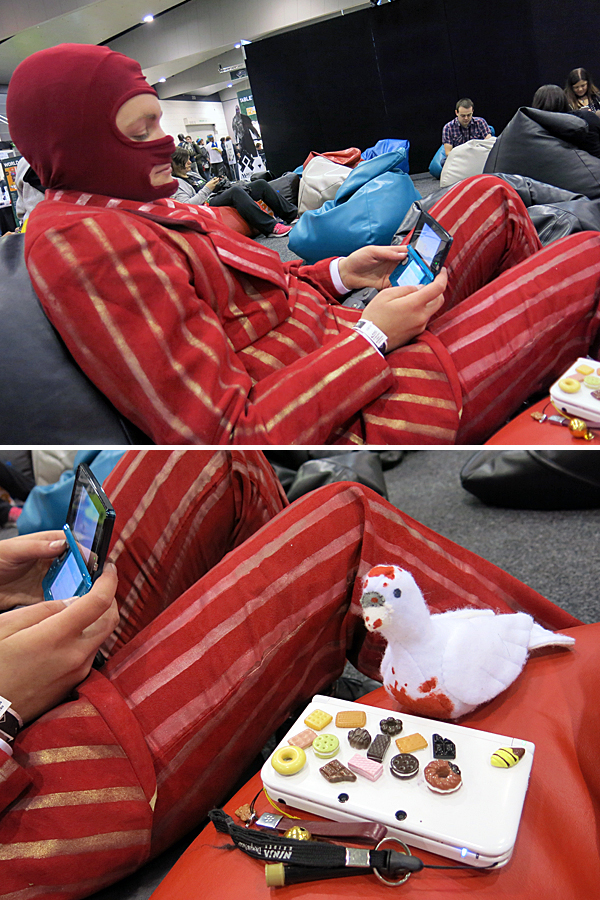 Streetpass time with Spy and Archimedes.

Every aspect of PAX seems to be crafted with gaming in mind; there are plenty of very comfortable seating areas, power points and “recharge stations” never more than a few metres away, LARP groups running demonstrations, tabletop and card games inviting beginners and experts alike to participate- it draws attention to how dated certain stereotypes are, namely, those that suggest nerdy types are shut-in recluses or that technology is inherently antisocial. To see so many people so eagerly interacting with strangers, participating in new games and experiences, sharing their excitement with the community and each other is an amazing thing to be a part of. 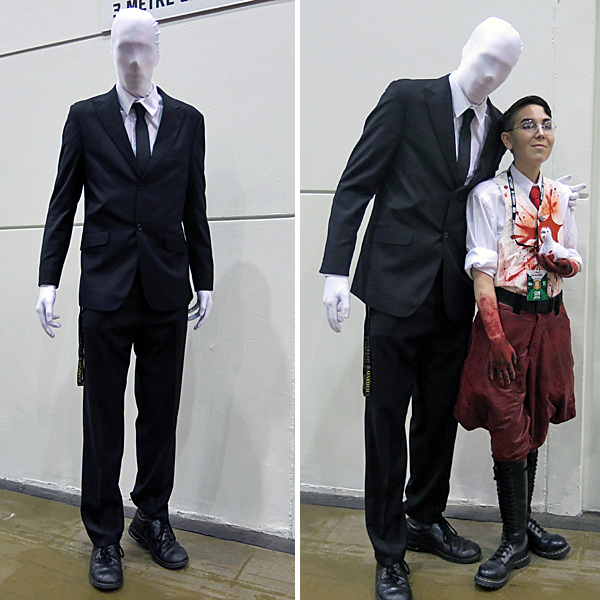 Slenderman is very tall and doesn’t talk much.

Even the cosplayers were well taken care of with their own designated changing area- complete with local cosplay superhero Captain Patch-It to rescue us from wardrobe malfunctions! 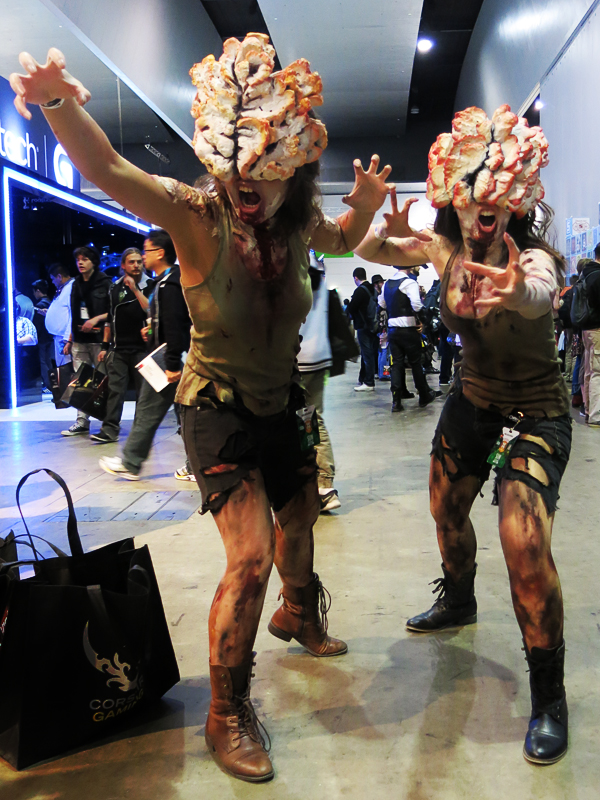 Two of The Infected from The Last Of Us.

Designated costume changing areas seem like something all conventions should incorporate; not only does it give cosplayers a private space to unwind without being asked for photos should they become overwhelmed, it also means they’re not crowding public restrooms when getting changed or applying cosmetics. Helpful to everybody, really! 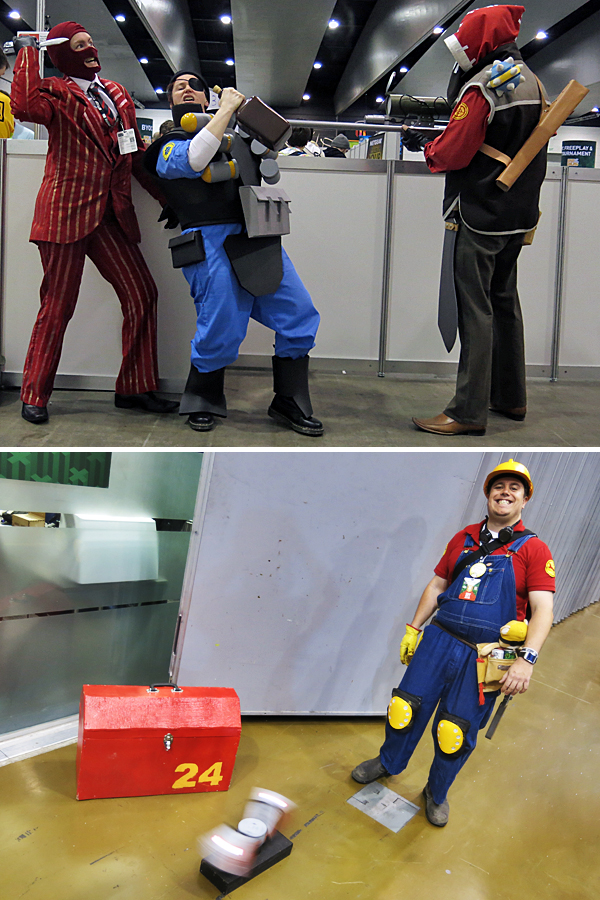 More TF2! Red Engineer is a gentleman named Putty who had worked some serious effort into that magnificent teleporter!

Tech Support and I had to call it a day around 2pm due to other commitments, so I said a last “hello-goodbye” to whoever I could find, and grabbed a T-shirt as a souvenir before we hit the road.

Make-up, and somebody who was more than ready for bed by the end of the day. Also a shot of my tie-clip- though not visible under the waistcoat it is so important! Gone are the days of constantly readjusting my neck-ties. A small thing really makes a huge difference. Got it from Daiso on a whim and now can’t imagine going without; functionality doesn’t have to be fancy or expensive.

Next year I’ll aim to be back there for sure.