Rothschild’s stethoscope and sphygmomanometer arrived a couple of weeks ago. 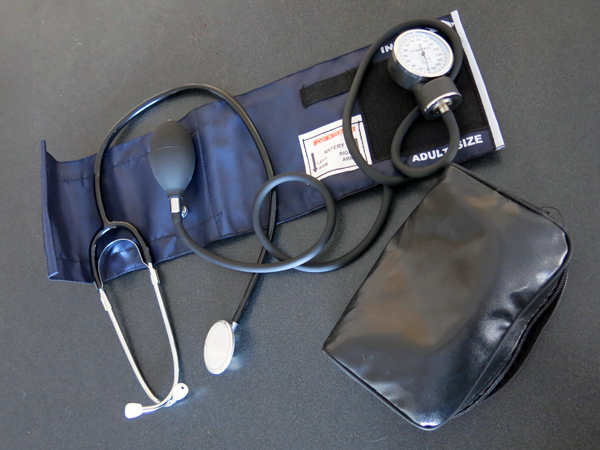 Complete with a convenient little carrying pouch for when you’ve got to monitor blood pressure on the go, I guess?

Nothing high end, but suitable for the job at hand and exactly what was expected for my budget of: “I am buying material wealth instead of food. Again.” 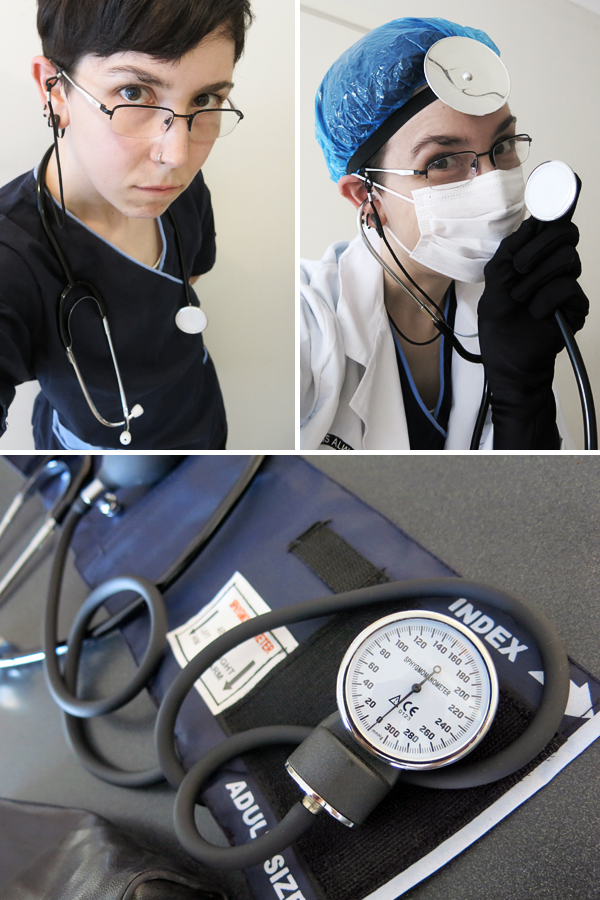 Unlike the massively adjustable automatic, the cuff on this one is way too big for my arms.

Playing around with it brought up vague childhood memories of pink and yellow stethoscopes, likely because my mother spent several years in nursing training. Although it never resulted in any professional context, the house was always riddled with medical tools and related literature- not to mention detailed anatomical imagery. If memory serves, the yellow stethoscope was packed away amongst toys for my brother and I, while the pink was for Mum’s training and not to be played with.

Listening to random body parts, people, animals, and any inanimate objects that happened across my path was as fascinating back then as it is even now. Am I in the wrong industry? Should my curiosity have been honed for a career in medicine? Probably not, for your sake more than mine, because where we stand now Reiner Rothschild is a fictional character. In some parallel universe sitting uncomfortably close to this one I’m incarcerated for crimes against humanity while your intestines have been unsuccessfully spliced with live hagfish.

But that’s not important right now. In this universe my biological warfare is mainly limited to combining yeast with bananas, caffeine, and sugar. Then feeding the resulting concoctions to friends and family members. 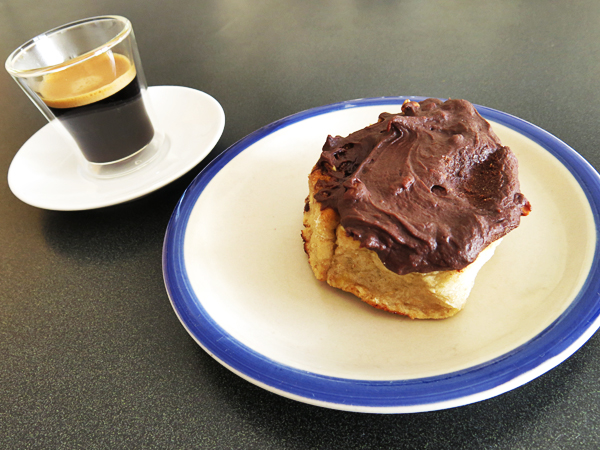 It absolutely counts as a scientific experiment if the yeast is still alive when you cook it.

Which people generally seem to enjoy substantially more than the prospect of being systematically dismantled from their extremities and fed to themselves in order to gauge the long term viability of auto-cannibalism.

Anyway, snapped up some scrubs from a local opp-shop, though they’re blue and show a little too much skin for Roths… I… just feel like sharing I guess? 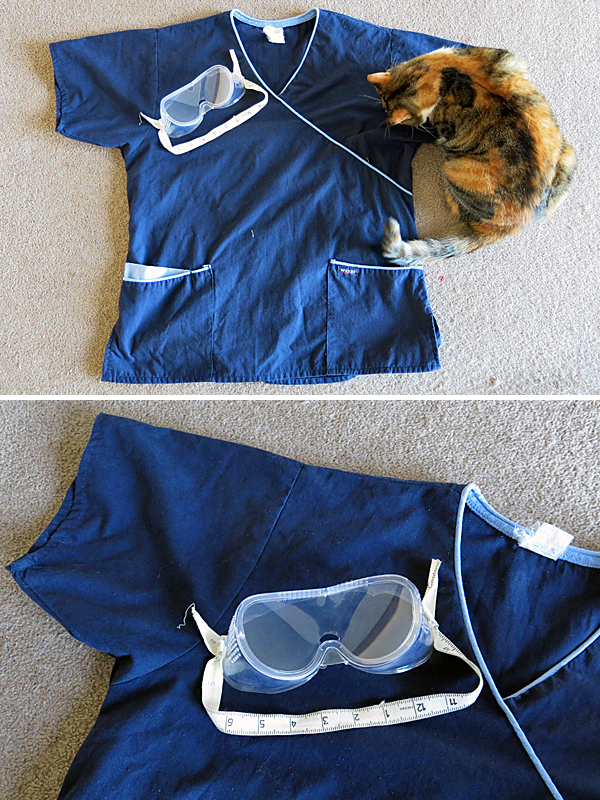 The safety goggles are 100% Roths though! Nabbed from a local dollar store, they’re relatively large and of a soft plastic so fit comfortably over my glasses- which was an important factor to take into account (initially I’d attempted to make do with a more rigid pair. Results were… awkward at best). 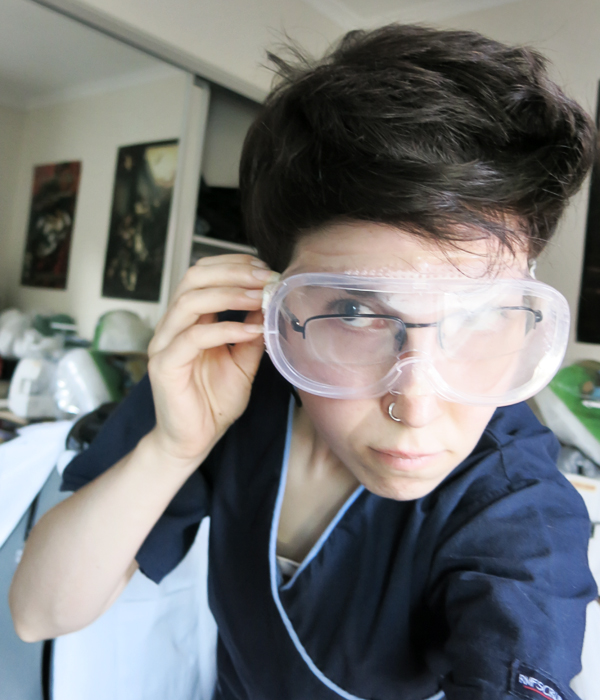 The strap wraps right around the head for a secure fit.

Roths is still after some nice leather gloves. Not that I personally have any real shortage of such garments, just a tendency to gravitate toward rather garish styles which are unsuited to Roths’ modesty. 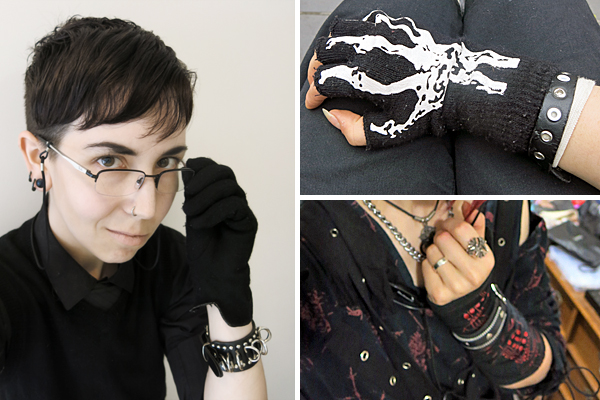 Even the most plain full finger style I possess are felted wool with a shiny vinyl trim.

Turns out plain fitted black is more difficult to come by than the emo trash I generally wear. A lot more difficult. Who knew? Even more so when your tiny child hands are paired with impractically long fingernails. 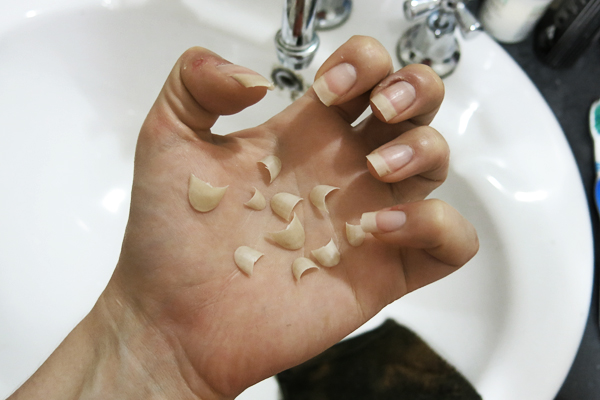 Speaking of impractical nails, I don’t know what happened to my left foot but the middle toenail has been purple for weeks now. 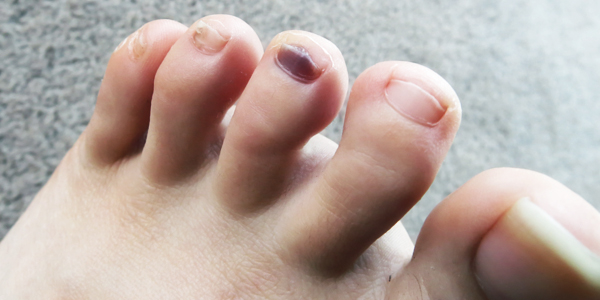 It’d probably hurt too if I had any real feeling in my feet. But I digress. Mangled toe pics probably mean it’s time to sign off. 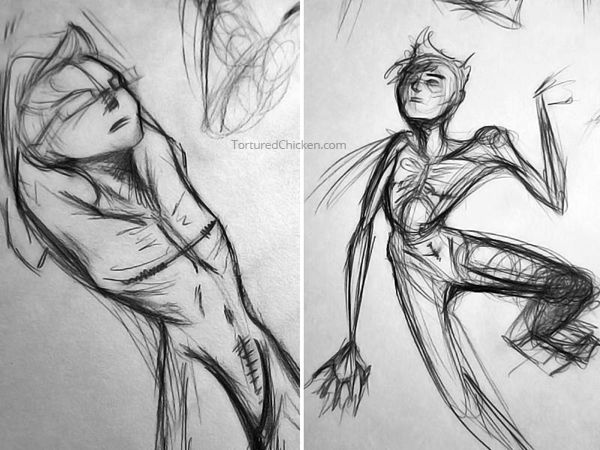 Because next time somebody asks me why I’m not pregnant I am going to go full Rothschild by gouging out whatever’s left of my uterus and throwing it at them. Just fucking try me, I double fucking dare you.