It was my birthday a few weeks back, has it been long enough that nobody expects me to organise anything? Yes? Good.

Heck, after the amount of Yu-Gi-Oh I’ve been watching recently I’ve got to say, actual 14 year old me would be super proud of the fact that I generally dress like I’m on my way to duel Seto Kaiba. 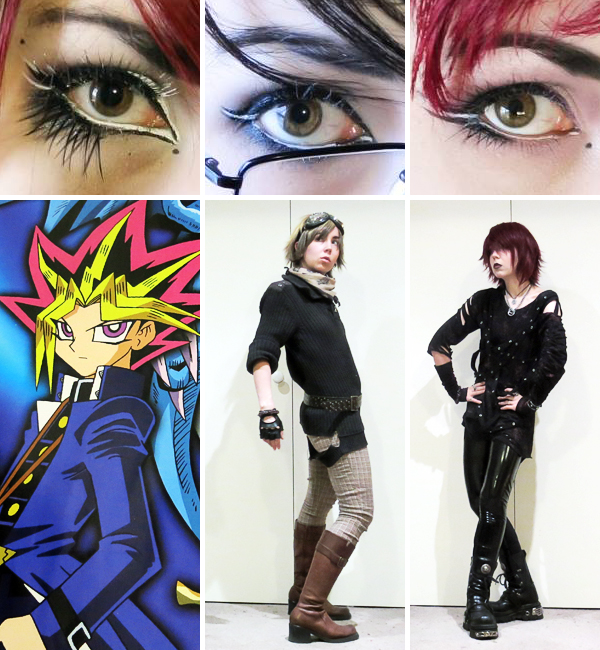 While I’m willing to admit that the whole belt-phase and some of the sillier things my hair has experienced over the years were not uninspired by Kazuki Takahashi’s character designs; it’s been 10 years since I last watched this nonsense-
My eyeliner has a lot of explaining to do.
Or maybe I just shouldn’t keep that huge Yami Yugi poster in the same room as my make-up…? 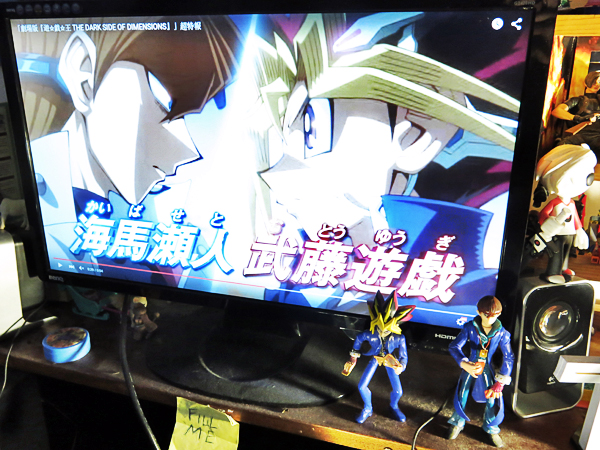 Why yes, my body is ready for The Dark Side of Dimensions, how could you tell?

But unfortunately the nuanced complexities of the affectionate interdependence fostered between the Kaiba brothers is not the point of today’s entry. As fascinating as their relationship* is.

Tech Support got me a new coffee machine. For my birthday. Nearly 2 months ago. We’re supposed to be talking about coffee today. 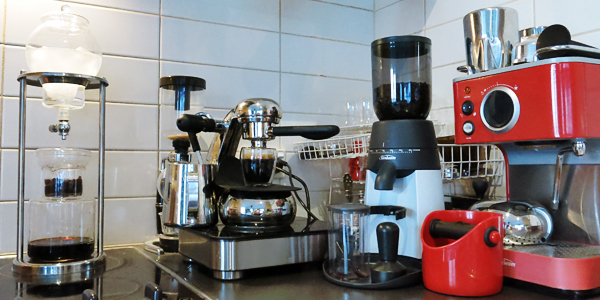 “I heard you like coffee so I got you another coffee machine so you can make coffee while you make coffee.” – Tech Support (probably)

Tech Support understands that the preparation process is something of a meditative ritual for me, so chose one as attractive as it is functional. Between us there are now somewhere around 10 different coffee machines in the house. 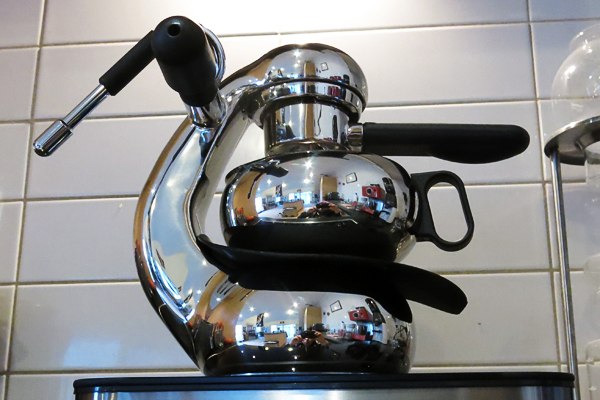 The outer design is not dissimilar to some of the stove-top Atomic machines, though apparently the internal mechanism is completely different?

The newest addition to the family is an Australian made stove-top espresso type called The Little Guy by Otto, along with a portable induction cooktop and even a cute red bin for used coffee grind! 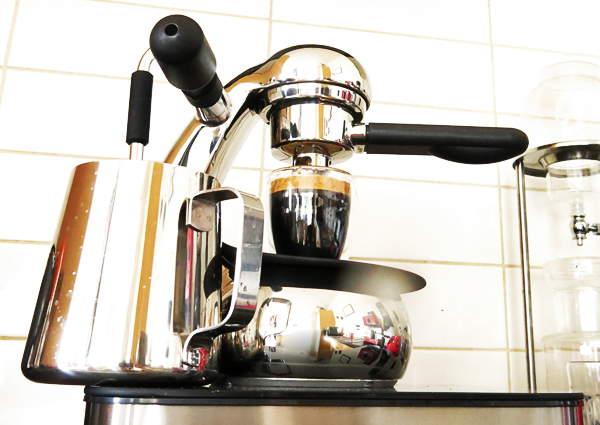 I refuse to acknowledge the term ‘grounds’ when referring to ground coffee due to “coffee grounds” invoking incredibly delightful yet misleading imagery to mind.

There was a little bit of trial and error, but it was actually very straightforward to get the hang of and can now knock out consistent shots of rich, velvety espresso.

It even builds up some decent steam pressure for milk texturing, though I’m not terribly keen on milk in general, it covers those who are. Like Tech Support… The traitor. 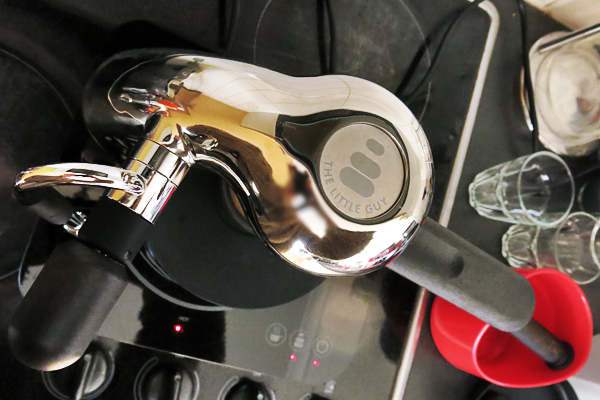 I get that the logo is a minimalist representation of the device, I really do, but it also sort of looks like a stylised poop.

There are only two real downsides to this device; the first is having to split my coffee with Tech Support (it produces a double shot with each use), while the second is waiting to cool down between uses. But I suppose 20 minutes isn’t a particularly long time, and maybe the cool-down can help discourage my rampant caffeine abuse? 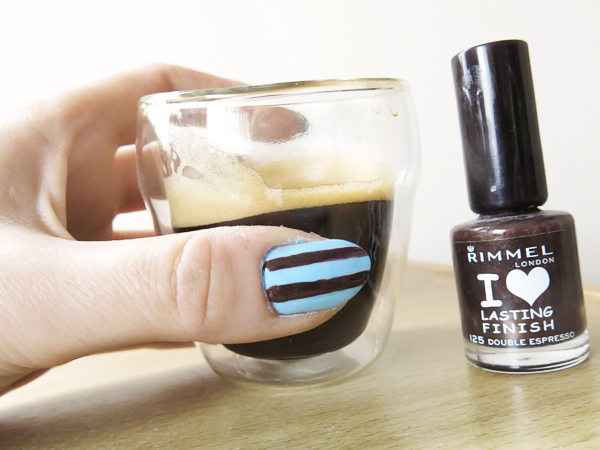 But damn do I make it look good.

With all that in mind, maybe it comes as no surprise that instant coffee isn’t something I’d personally recommend drinking.

Haphazardly mixed with molasses and a drop of red food dye though? You’ve got yourself the makings for some basic edible fake blood! 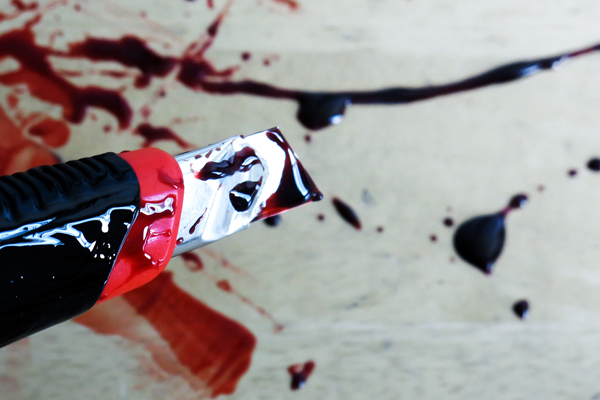 Despite these experiments, somehow I’m still allowed on carpeted areas.

Life though, isn’t always blood and guts. Sometimes you find yourself faced with bright white socks, wedding invitations, and somebody trying their best to explain to you that it isn’t Halloween every single day, so maybe put the entrails away for now.

Point is, I frequently spill beverages all over myself so white clothing really doesn’t agree with the amount of coffee I drink. 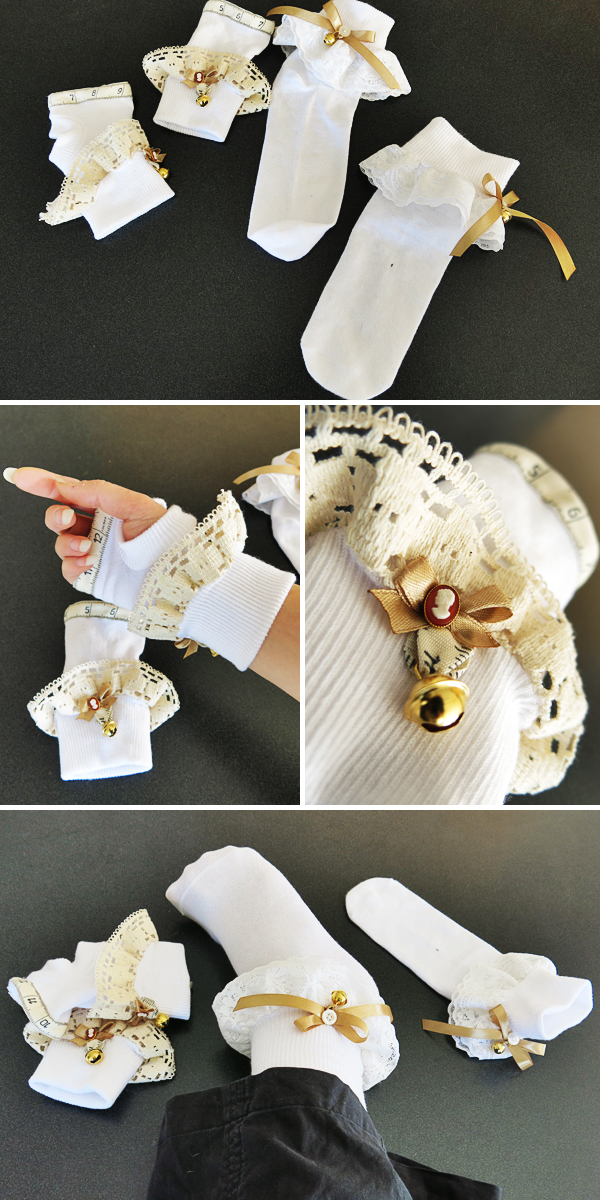 And I probably shouldn’t be invited to weddings at all.

So you get some kind of thing which can be filled up with enough water to entirely saturate the garment. This green bucket works for me but you know, just using a sink/basin would be totally fine. 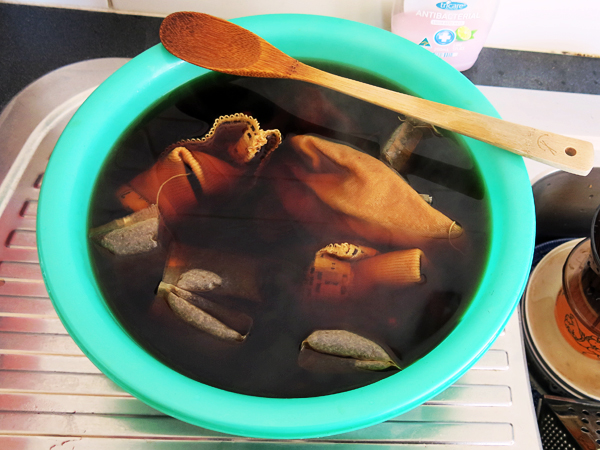 Avoid coffee stains by soaking your clothing in coffee.

Boil up a couple of litres of water, pour it into your receptacle, then stir in some coffee and tea. Maybe use a spoon or something for the stirring. Based on personal experience I’m inclined to mention that plunging one’s hands into boiling water is generally a bad choice.

For these little socks and gloves I’ve used about 10 black teabags, a tablespoon of instant coffee, a cup of brewed coffee and even a shot of espresso just for good measure. 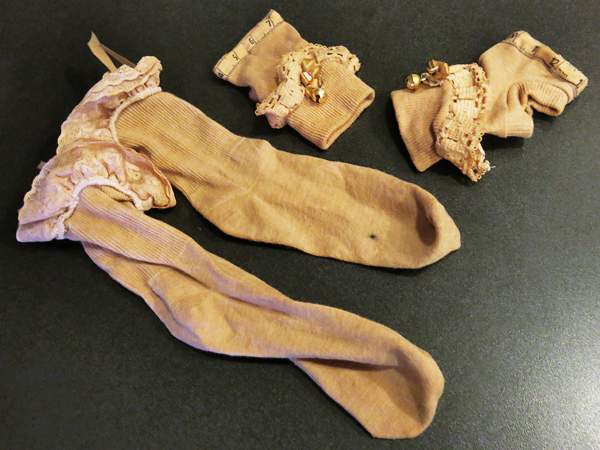 Stir in the garments until they’re completely saturated, then leave it all to soak for a few hours, stirring intermittently, until the water has cooled completely.

Once cooled, rinse the garments in cold water, wring the water out thoroughly, and leave to dry in the shade. They may retain the tea/coffee aroma, which I think is pretty great but you might not, if this is the case then put them through a cold gentle cycle in your washing machine with a cup of white vinegar. The vinegar will help to lock in the colour and remove any aromas (vinegar tends to dissipate by the time the garments are dry, if it even lingers at all; if you’re concerned then simply add a few drops of your favourite essential oil to the rinse cycle). 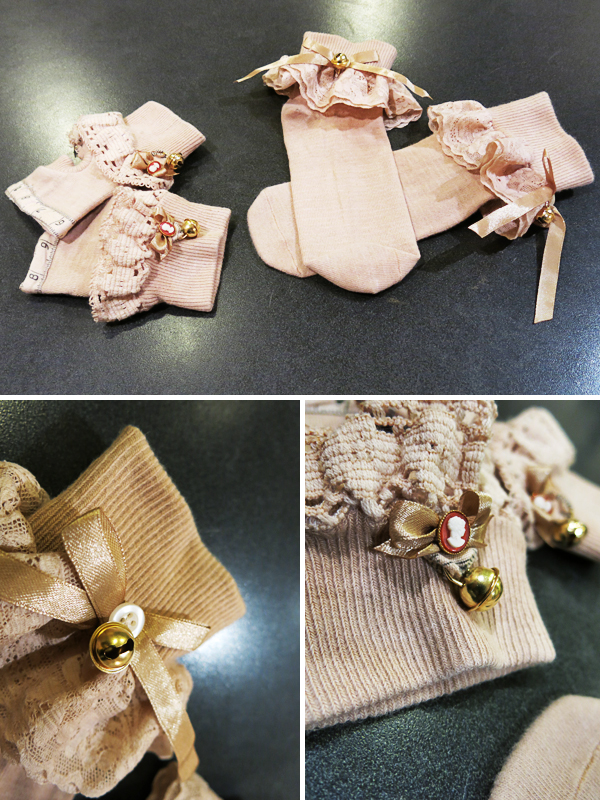 Allow the garments to dry completely, give them a quick press with your iron, and we’re done! 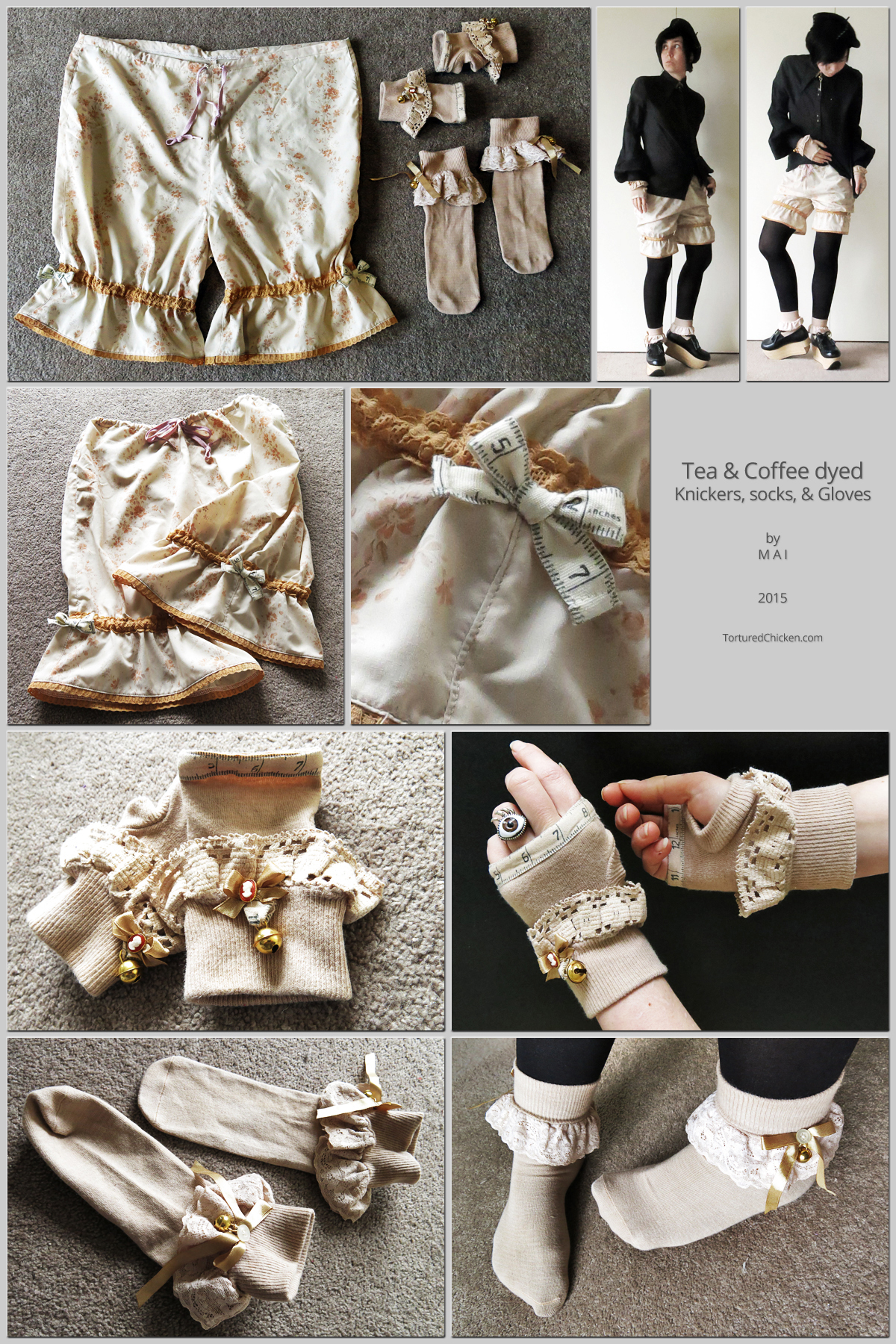 Once everything is pre-coffee-stained it no longer matters if your shaky hands (from ingesting too much caffeine) are causing the spillage of your drinks.

As for the construction of these garments, it began with a bulk pack of plain white socks: 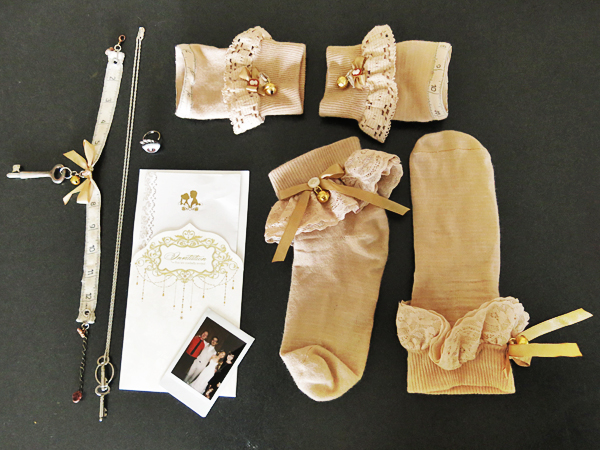 Truth be told this entry has been intended since April.

While the knickers were not finished in time, the socks and gloves were incorporated into an outfit for the wedding of some friends of mine. 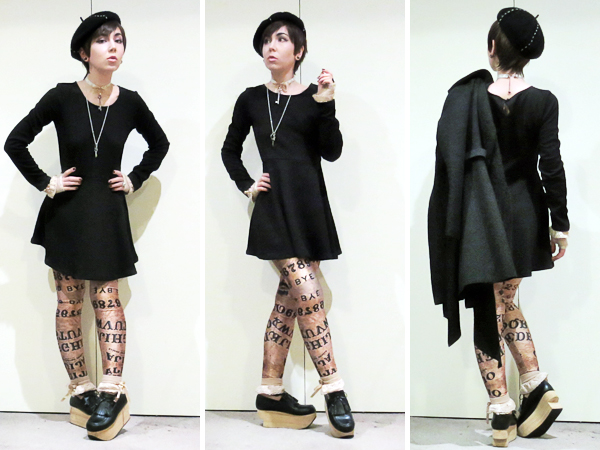 I don’t always wear dresses, but when I do I buy them from the children’s section in K-mart.

Along with a choker made from the same tape-measure printed cotton binding as used on the gloves and knickers. 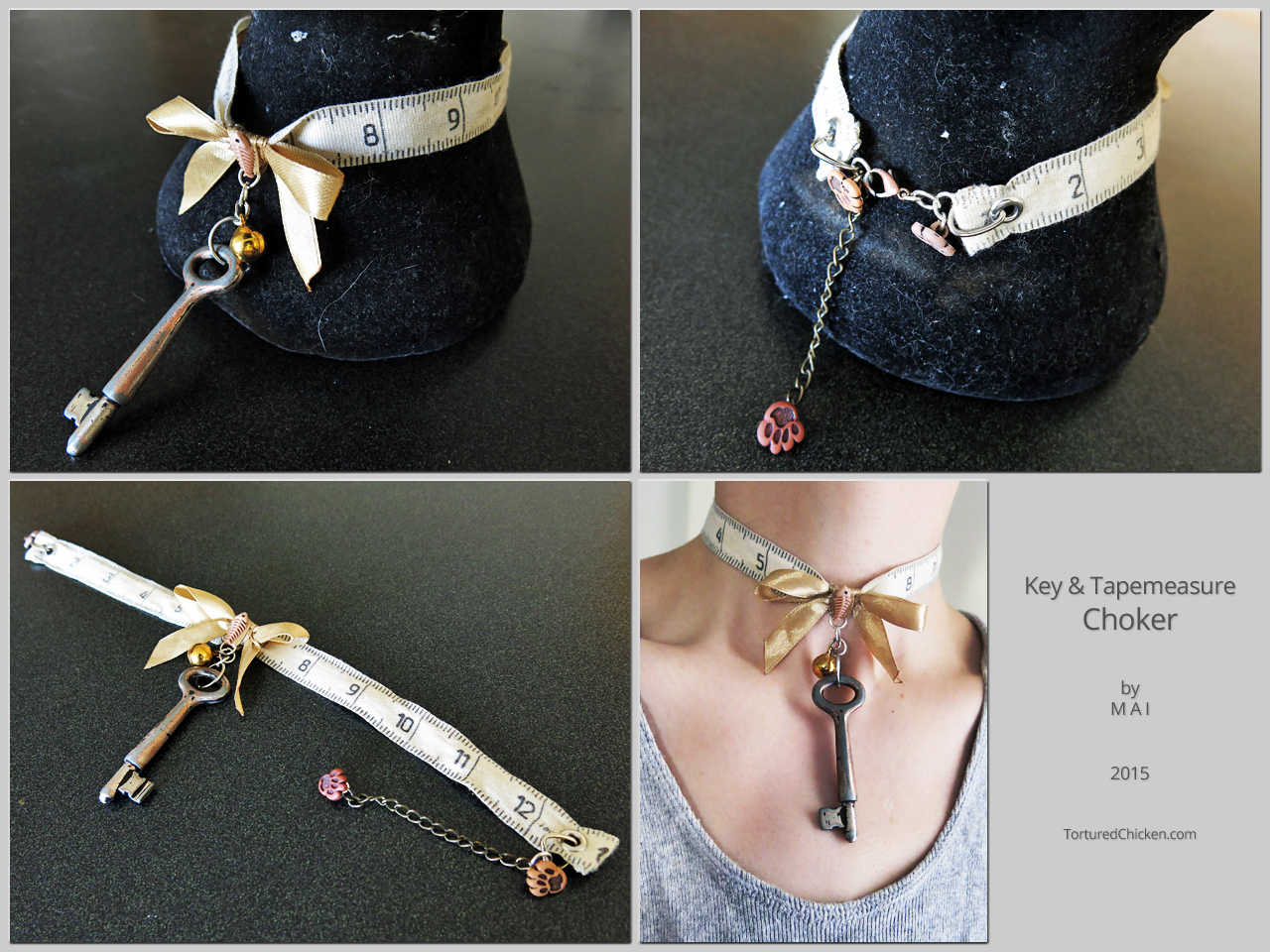 It features a polyester ribbon backing, gold ribbon bow at the centre front, the key I stole from Tech Support that one time, a gold bell, paw-print and fish-bone bead details, and at the centre back a lobster clasp fastens securely to a length of chain.

So, now you know.

*Specifically in the Duel Monsters anime, where the unhealthy co-dependency Kaiba holds over Mokuba during the Death-T arc is not present (and by “not present” I mean “arguably worked into Noah for the Virtual World arc instead”). Because they don’t need any of that negativity in their lives. Only mutual respect and protective BrOTP feels allowed.