What up, losers? Insulting people is an appropriate way to begin a blog entry, yes?

Well, even in the event that it isn’t, I’ve made my choices and am committed to them, for better or for worse. Mostly worse.

Speaking of poor life choices that I’m committed to, Separation Anxiety, is still a thing that is somehow managing to still be happening! The prologue reached its conclusion some weeks ago and first chapter has since commenced. 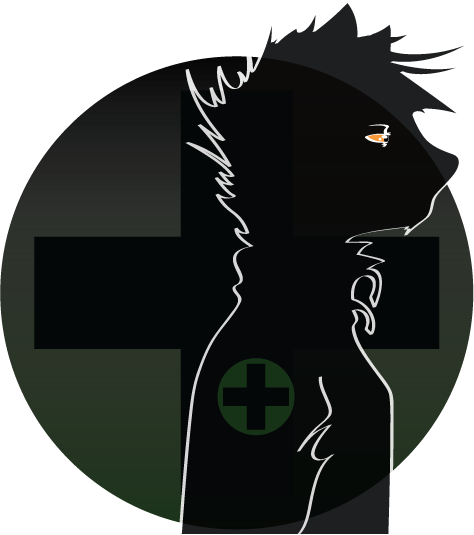 Updates are still on Thursdays.

But that isn’t really why I’m here today.

The horns have been taken off my Karkat Vantas wig for the time being, and casually replaced with badly cut blue and white hair extensions. I’m willing to believe this will work out okay as a Chainey (from Maggot Boy) wig for the upcoming Zombie Shuffle: 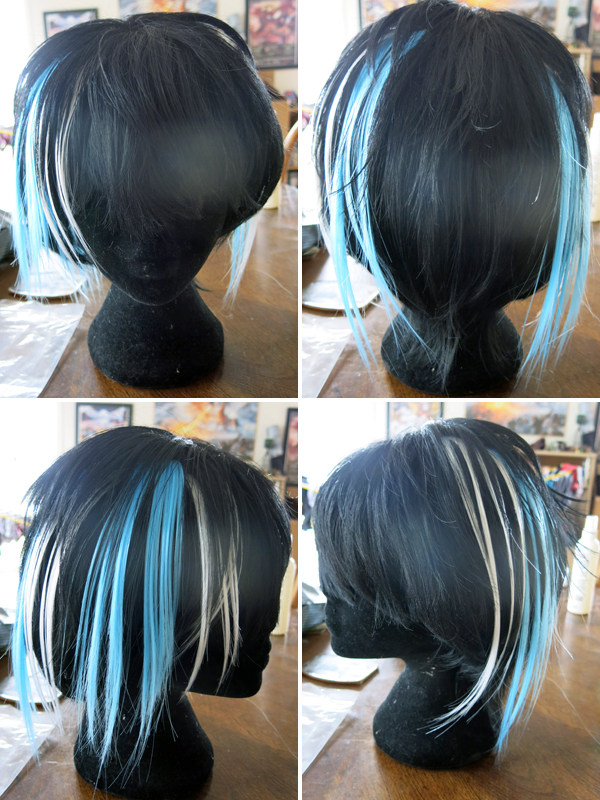 Hallward will likely be filling this role in our rag-tag MB group. Whether or not he willingly agrees.

My Owen wig has also been re-styled some, mostly just trimming back the hair on the left hand side a bit more. Also made some minor alterations to the shaping of his teeth, but not really anything noticeable enough to warrant the taking of more photos in either case (applying Owen’s make-up is a pretty big commitment that I just don’t want to deal with right now).

But here’s a quick photo of some new trousers I got for the not-riddled-with-bullets version of Owen: 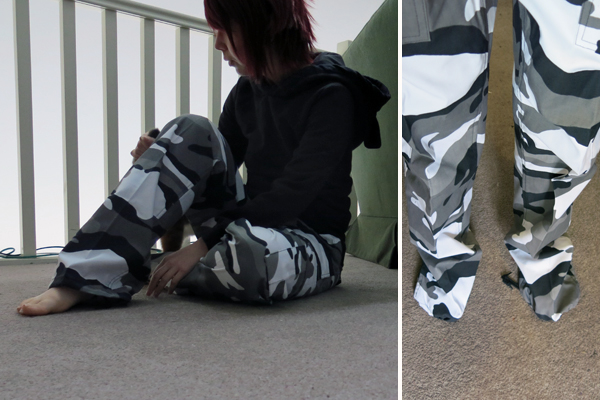 Baggy urban camouflage, a size or two too big. This was a deliberate choice, being a short-stack who steals most of his clothes from the people he kills, I kind of get the impression that most of what Owen wears probably doesn’t fit him terribly well.

Will add blood-stains to the cuffs next time the non-shot version of Owen is worn. Who knows when? Got to wear the repeatedly shot by PJ version to the Zombie Shuffle first.

Unfortunately a few concerns regarding the Melbourne Zombie Shuffle are starting to creep up on me. Some months ago they announced that it was planned to be held on the 12th of October, but we’re getting mighty close to October here and they are yet to release anything official. No start or end location. No route map. No times. Not even an official confirmation of the date, and people who have tried contacting the organisers haven’t heard anything back.

Really hoping it hasn’t been cancelled, it’s one of my favourite events of the year and I’ve worked really hard on this costume (not to mention wrangling a group together) that I’ll probably never get to wear if the Shuffle is off (complete lack of organisational skills, yo). Then I’d probably cry. A lot.

Where one costume never gets worn another probably does. Probably. Or… at least there’s more time to make other costumes that will also never be worn…? Uh…

Some considerations have gone in to the possibility of attending the Armageddon Exhibition this year. MaEmon has expressed that she’d like to cosplay Resident Evil with me and I’m having thoughts of possibly attending both days, with Resident Evil on one and Pacific Rim on the other.

See, what started out as a joke regarding my bad haircut has inadvertently turned into a serious cosplay project. 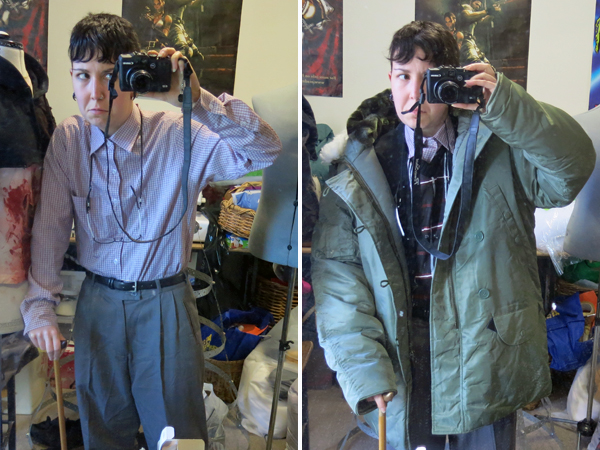 A serious cosplay project which would probably be far better suited to a winter convention, unless we happen upon an unseasonably cold October. 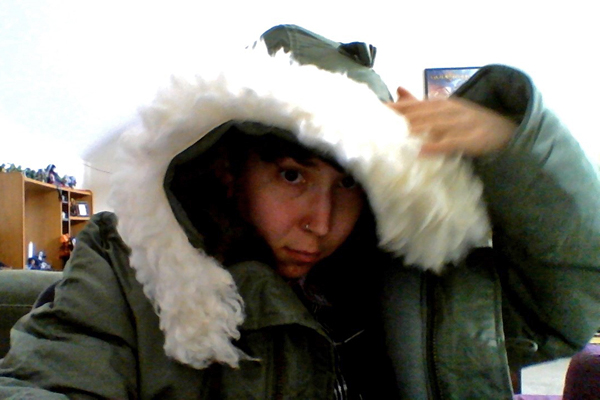 That white fur is a straight up sheep skin, and the cats are obsessed with it.

Shirt, trousers and belt were opp-shop finds. Buttons and button holes have been added to the shirt collar. The trousers have been taken up by 10cm. The cane came from a Daiso store and was painted with spray enamel in black and gold. 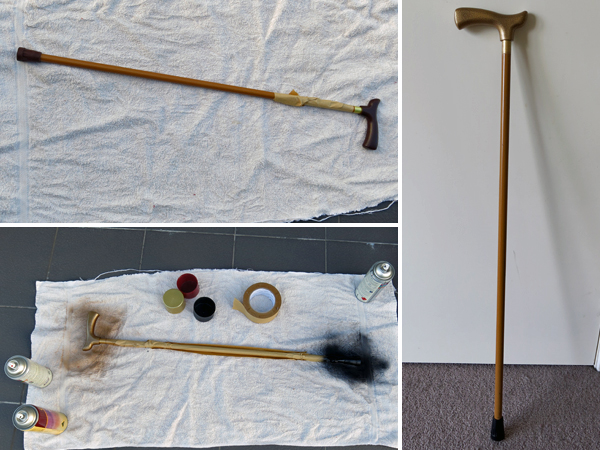 At first for the sweater vest I was trying to locate something “close enough” to the design, but ended up getting some fabric from a local opp-shop and painting on the plaid pattern.

Just a plain old jersey knit with ribbing around the neck, armholes and hem.

Probably a terrible idea, even with masking tape, because my hands shake something fierce but I guess I hope there’s enough going on elsewhere in the costume that people won’t pick up on the shaky paint job. 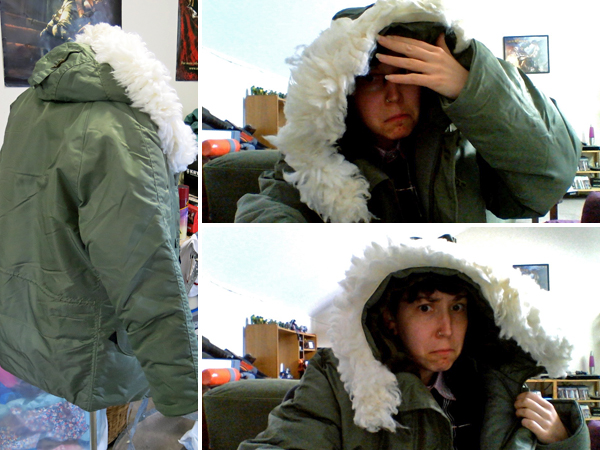 The parka is an N-3B courtesy of eBay. A couple of minor tweaks have been made to the fur on the hood, but nothing serious. If you’re planning on getting an N-3B, pay attention to the sizing charts and the part in the description where they’re described as “generously proportioned”. This one is the second smallest size I could find. Figuring that the smallest (XXS) would probably fit, and that I wanted something slightly baggy I sized up to the XS instead. It is enormous. The XXS probably would have been slightly baggy because this thing is an impractical tent! 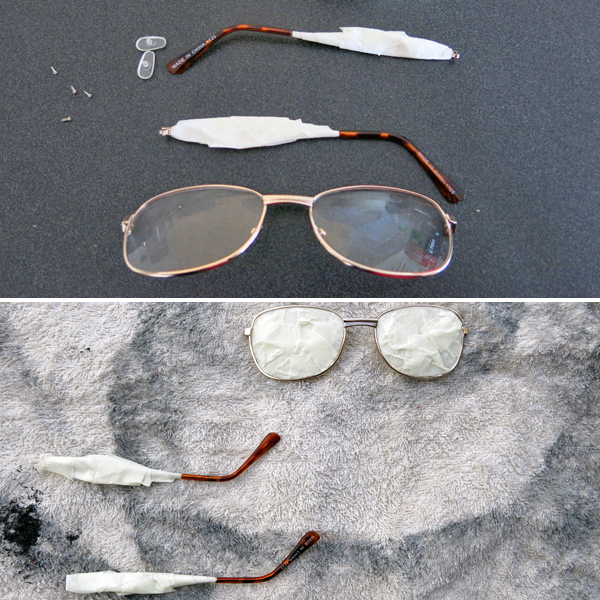 A rounder shape might have been better, but I didn’t want to spend too much money on them.

The glasses came from a dollar store. They’re magnifying reading glasses (+1.25) which have been dismantled, painted and reassembled. 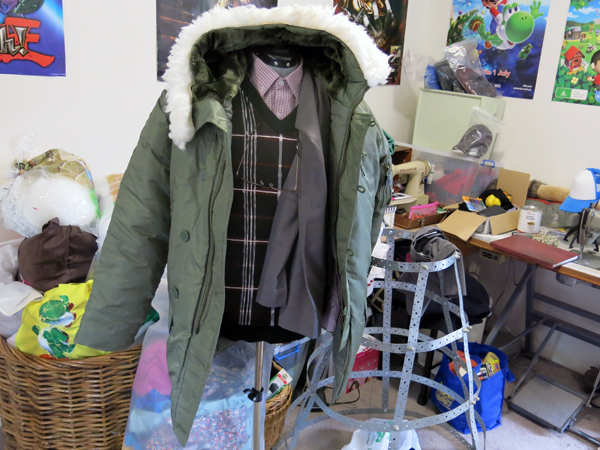 Rupert is the mannequin of choice for this one, despite being substantially bigger than me, because all of Gottlieb’s clothing is awkwardly sized and proportioned. Yay for cosplaying characters who can’t dress themselves?!

Still need to draw up and print an ID tag, get some old man shoes, and make some heavy alterations to a suit jacket. But all in all, he’s pretty close to completed.

Shit, I’ve even got a chalkboard! 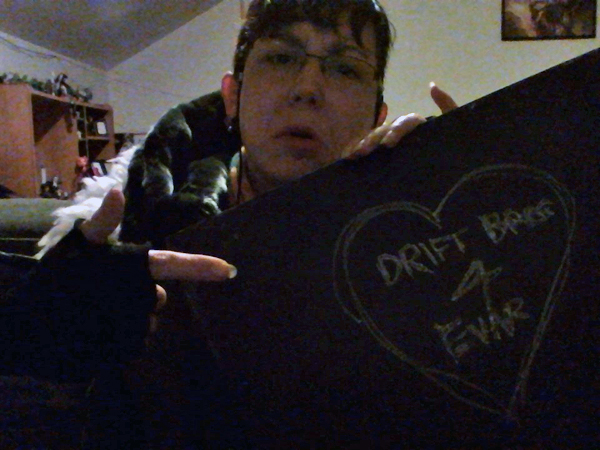 Yeah… uh… sorry about the quality, that was a webcam picture taken at about 3am last Saturday. Don’t ask.

Well… It’s probably time for me to go outside and reconsider certain decisions for a little while.

But not before acknowledging certain other decisions which, in hindsight, were not so great. See, I went to the Royal Melbourne Show with my parents recently. I don’t think I’d been since highschool. Tech Support claims we went together once, but I have zero recollection of that being a thing that ever actually happened.

When my brother and I were kids we’d go every year with the family. It was a lot bigger then, and I don’t just mean because we were smaller, they have literally torn half of it down and re-built the rest since then. There aren’t as many animals any more. I didn’t see any turkeys or Anglo-Nubian goats. Maybe I just wasn’t looking hard enough? There used to be an entire building dedicated to poultry. Ah well.

This wasn’t the bad decision mind you, it was still a very good day.

The bad decision was when my father and I went on one of the rides. We chose the tallest one that looked the most likely to result in serious injury and/or death. I think it was called “No Limit”. I’d put my back out some days before and did not heed the warnings. Though it hurt to breathe afterwards, I still regret not going on any other rides.

This was no taint on the real highlight of the day though; that was the garish decor featured on the “Surge”. Don’t get me wrong, all carnival rides consistently look (and sound) utterly awful, but the Surge just… 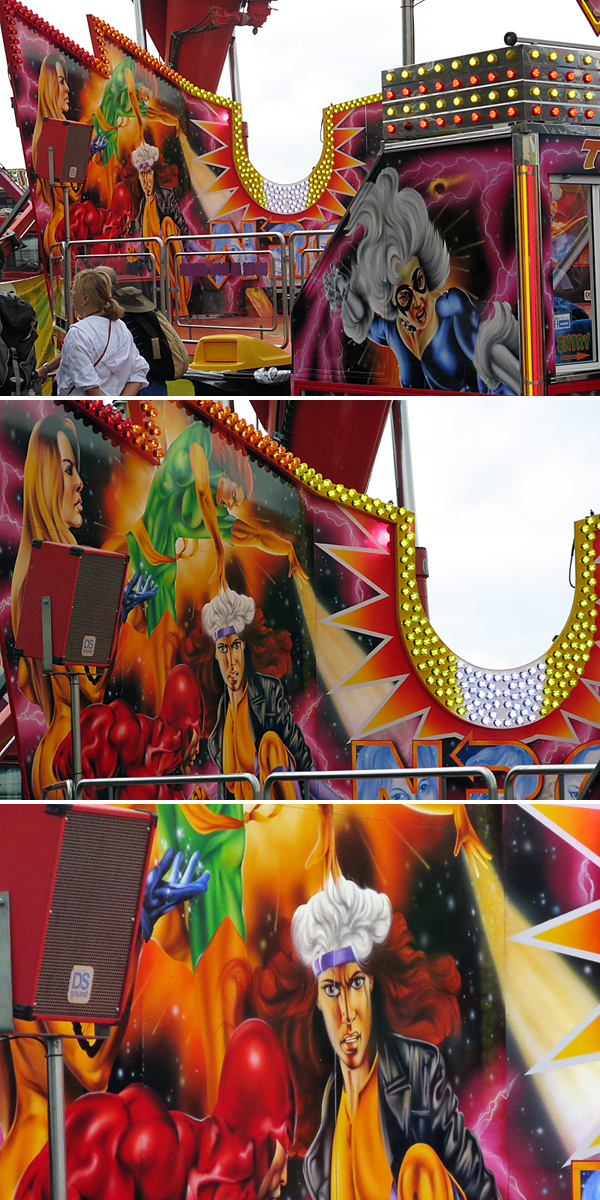 The question I am about to ask you is rhetorical.

Why do all of the badly airbrushed arguably female superheroes bear a more than passing resemblance to Nicolas Cage? 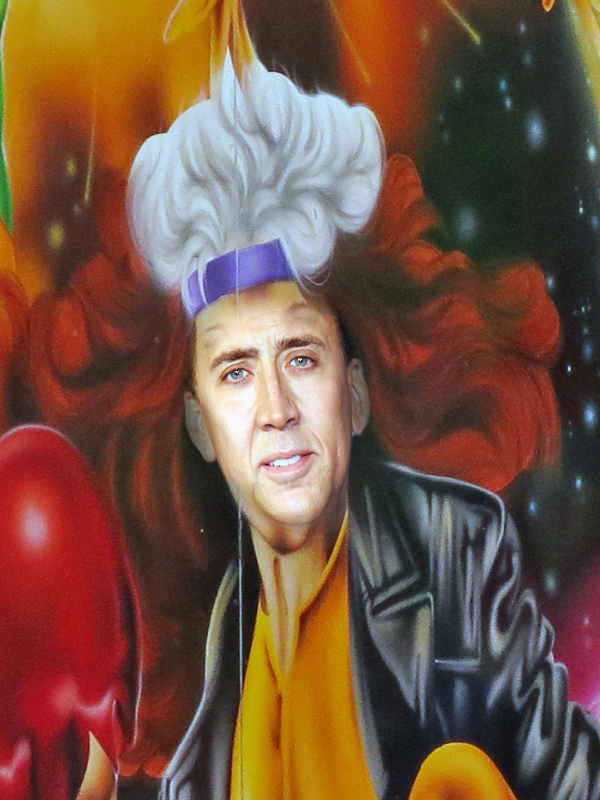 Ps. Over on Facebook I’ve embarked upon Project 365, a project where one photo is taken and uploaded every single day for a year. Just over a week into it now.