Next month is October. At the end of October is Halloween. If there’s one pseudo-holiday I get needlessly excited for, it’s Halloween.

As a child I never got particularly excited for it. If I recall correctly we went trick-or-treating maybe two or three times, but it just isn’t a terribly big event in Australia (despite the marketing attempts of many stores; but I don’t know, maybe times have changed since I was a kid).

Personally I think it’s kind of a shame, coming from a family that regularly celebrated mid-winter along with Christmas and Easter, that one of the seasonal holidays was more or less left out (and also a little confusing that everything is seasonally backwards in Australia; seriously, fertility in autumn and death in spring? Come on, guys).

Thankfully, as an adult, who is definitely very mature and responsible and capable of looking after their self without need of constant supervision by somebody more qualified, there are so many more options for Halloween festivity that I get positively giddy with joy. It’s more exciting than Christmas and my birthday combined. Last year I managed to drag it out for something like three weeks. Can I have a full month of Halloween this year? Let’s hope so!

Part of the excitement is courtesy of the Melbourne Zombie Shuffle, which happens in October every year. To be honest I’m not 100% sure that it’s specifically intended as a “Halloween” event, or if the timing is just a happy coincidence, but given the shambling nature of the day, I’m inclined to categorise it as such.

My first zombie shuffle was in 2011, I didn’t go all out for costumes, just threw on my straitjacket, a silver wig and some spooky contact lenses. 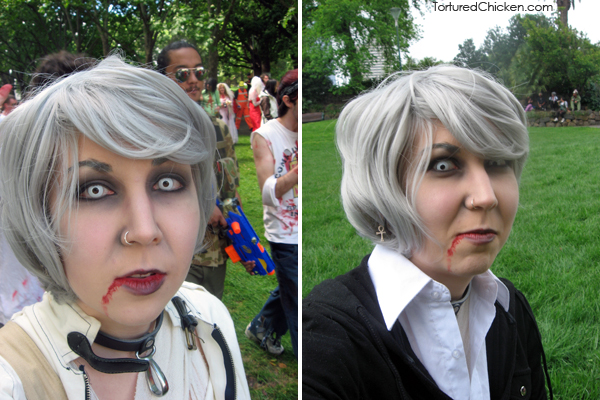 With a hoodie and shirt to quick-change into at the end of the day.

It proved to be a lot more fun than I’d anticipated, despite spending the majority of the event alone. The important life lesson to gain from this is that you’re never truly alone when a part of an undead horde.

Last year involved a lot more preparation, and the decision to stick a bunch of syringes in the back of a lab-coat really paid off, with several people even going so far as telling me I was their favourite zombie of the day! 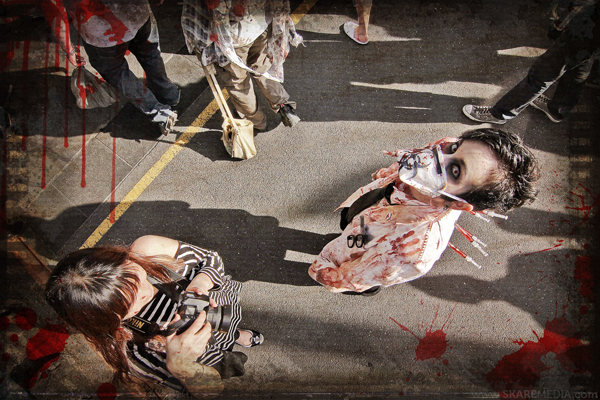 Plus it was 50/50 on whether people were identifying me as male or female and I am all about being ambiguous.

This year I’m aiming to wrangle a Maggot Boy group together for the event.

“Shouldn’t you make a new costume instead of just re-wearing your Manifest costume?”
Oh, but of course!

While I’ll be wearing, more or less, the same outfit, the costume itself is quite different!

Even the make-up has been updated, in that I stitched sutures to my own face. 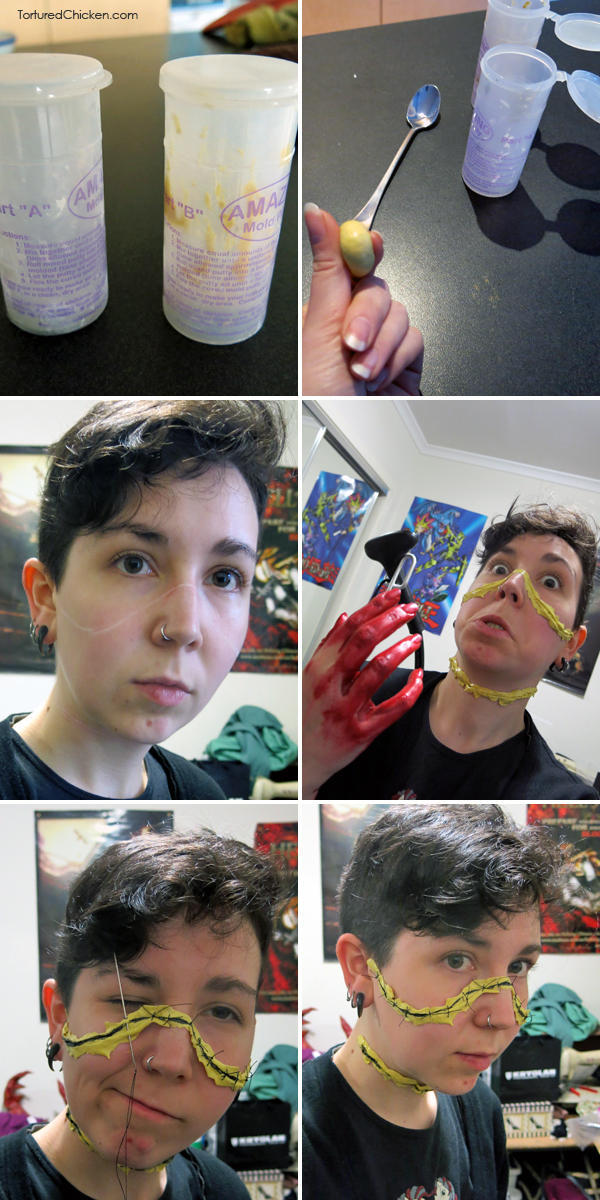 It was every bit as awkward as you’d expect it to be. Possibly worse, as I do not (currently) possess the correct needle for attempting such a task and almost lost one or both eyes.

The base for the sutures is silicone. Initially I’d tried for latex but horrible welts that healed a week later caused me to reconsider that decision. The silicone was some leftover MaEmon had (she got my latex, see) and I think it is meant to be the sort for moulds or something but, you know, free silicone is free silicone. I’m not exactly in any position to be choosy over here. 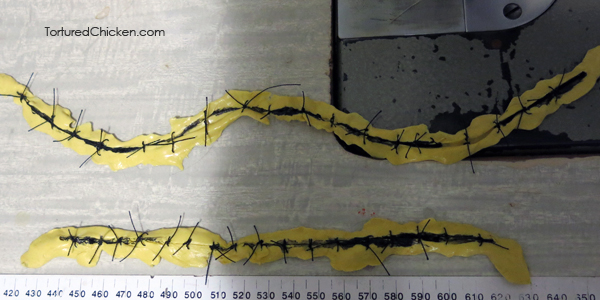 As for clothing, T-shirt and hoodie came from the local opp-shops. It was surprisingly difficult sourcing a hoodie without a zip down the middle. 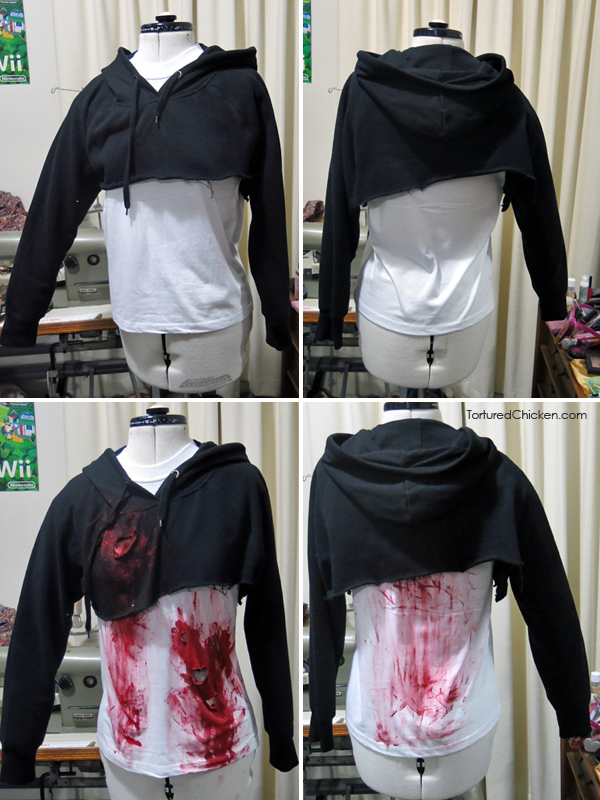 I cut the hooide in half while wearing it using a butter knife because I’m hardcore like that.

Ears for this hoodie were made of scrap left over from making the hoodie of my other Owen costume. They have a shoulder-pad core for structure. 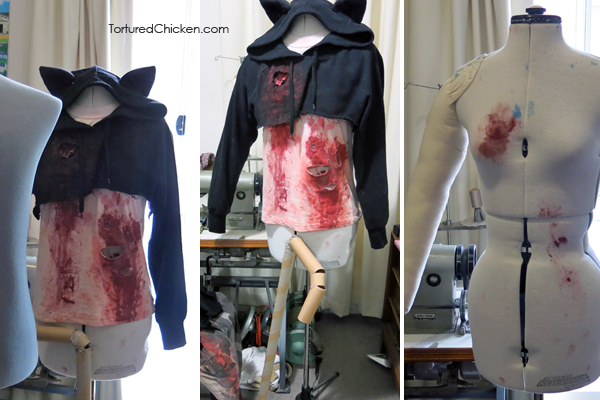 Then there’s this funny pipe-thing (that’s a technical term right there) which I just assed together with cardboard tubes, hot glue and many layers of duct-tape. 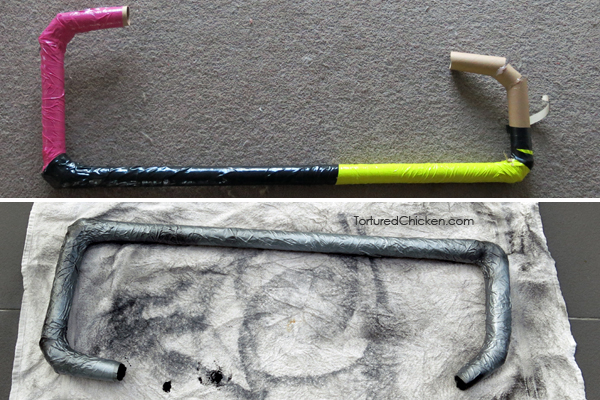 Who the fuck designates a white towel for spray-painting duties?!

The trousers are the same as the trousers from the previous costume because I just don’t like them that much and didn’t feel a need to incorporate them into my daily wardrobe.

Also, being the sort of idiot who paints trousers while wearing them, I probably should be banned from carpeted areas. 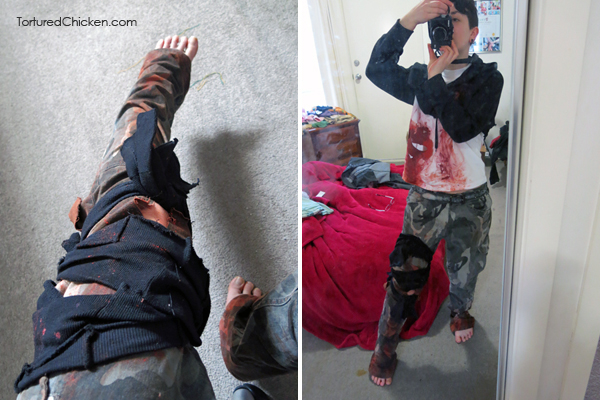 I hold out hope of obtaining better camouflage trousers for my non-repeatedly-shot-by-Parker version of Owen in the future.

To gouge holes in the trousers and tops I utilised sandpaper and a splayd rather than the usual fork, so that the same tool could simultaneously be used for spooning instant coffee into the paint. We are all kinds of versatile-practicality up in here. Get out.

The “blood” of course being a concoction of red and black fabric paint generously dosed with instant coffee. It takes the edge off the red and gives it that kind of rusty-iron look.

For the zombie shuffle I’ll also be making a batch of edible fake blood to chow down on, so don’t despair if you think there isn’t enough, I’ll be adding a lot, fresh, to both my body and clothing, on the day. 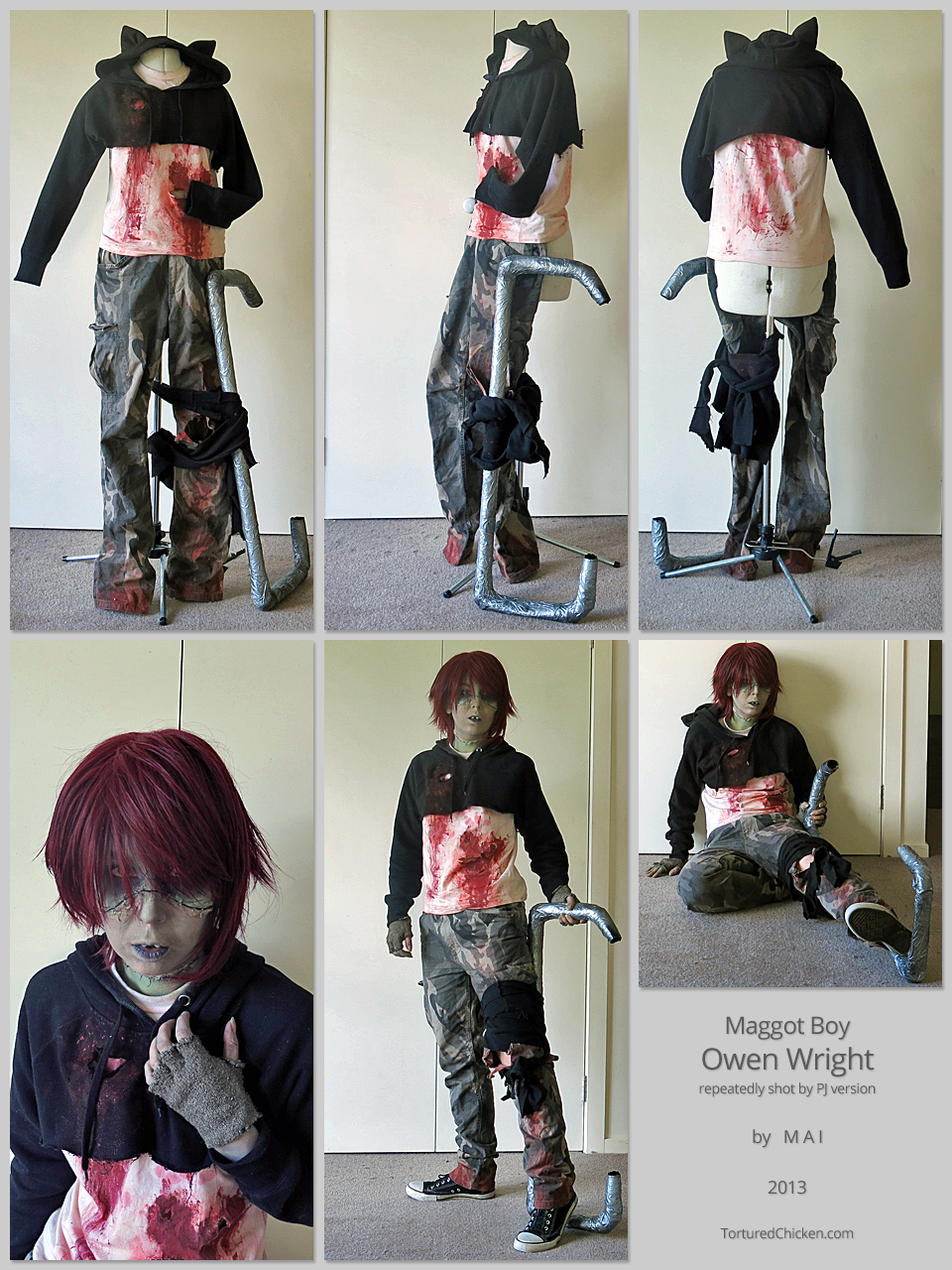 The pipe-thing is tied to the leg utilising the goon-pocket half of the hoodie.

Here are some more make-up pictures, including some that my cats really didn’t want to be involved with, because my camera went away recently so I purchased it a couple of tripods as “welcome home” presents because I missed it so much and holy shit tripods make life so much easier why did I leave it so long to get one?! 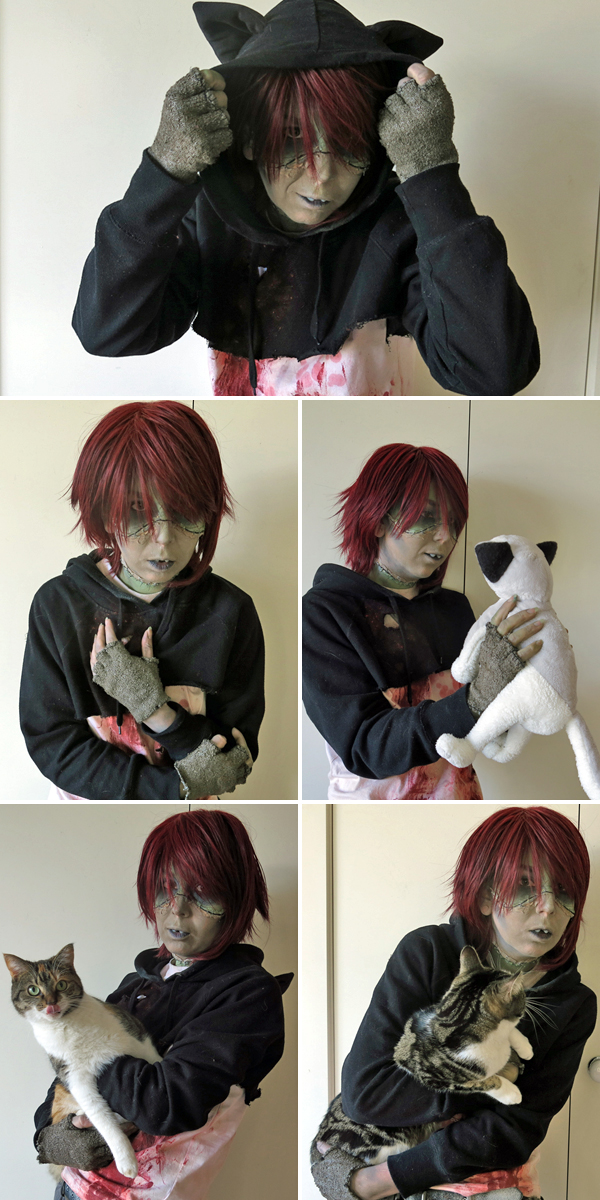 Krissy plush, you are the only photogenic cat today.

Also I want you to know that, while you can’t see it, I always wear appropriately emo cat-themed socks while cosplaying Owen: 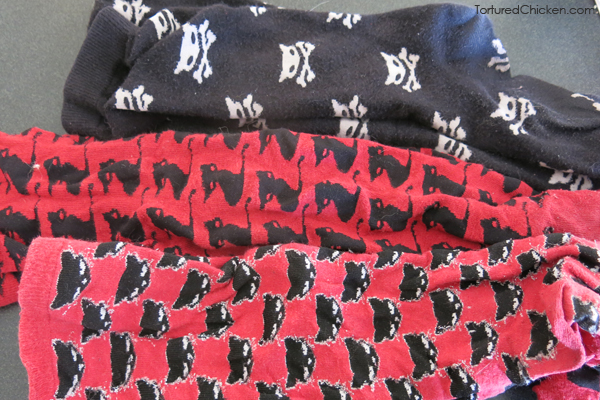 Is it weird that I take cosplay all the way down to underwear level?

Last but not least, MaEmon illustrated a beautiful Happy Birthday Lovely Booklet for me and… 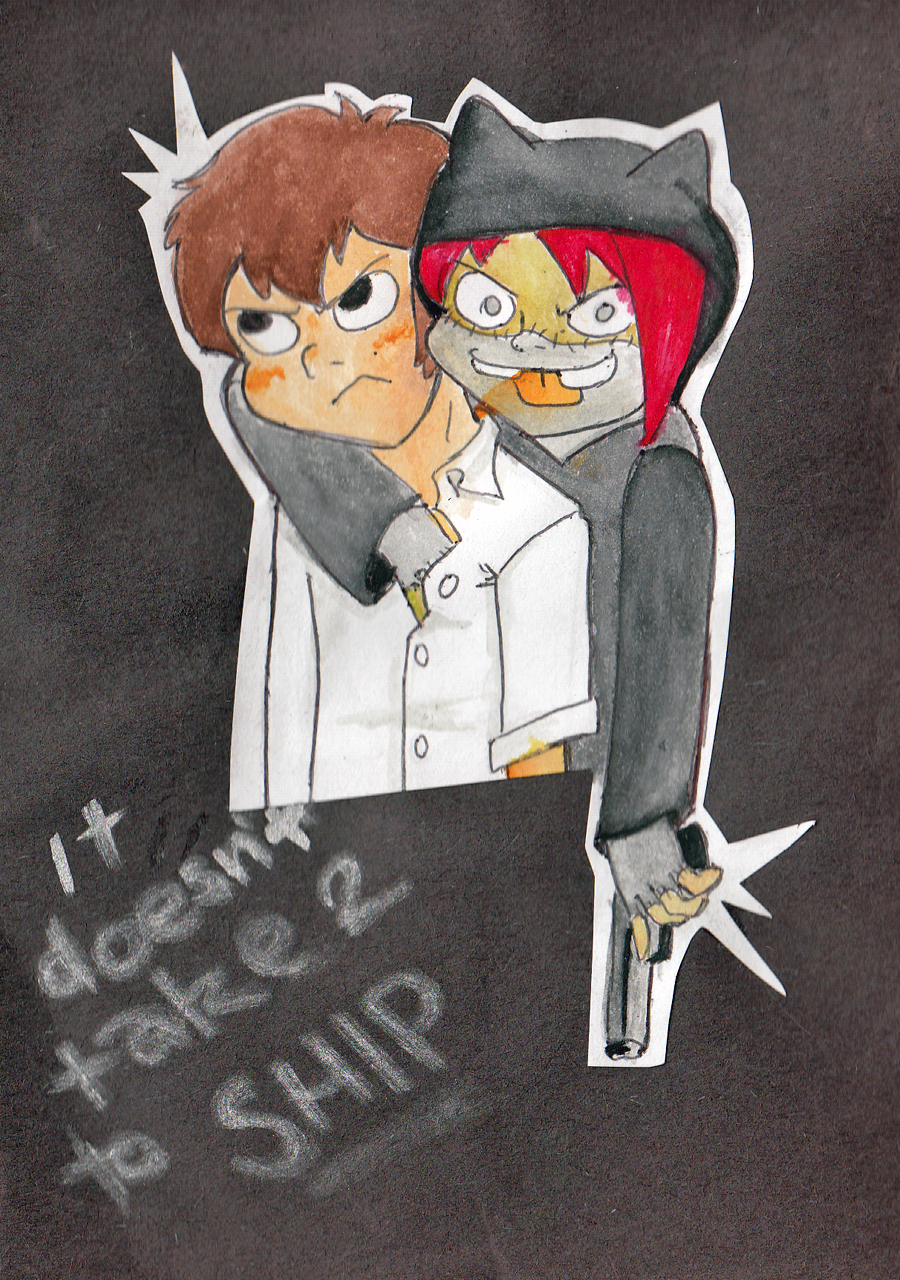 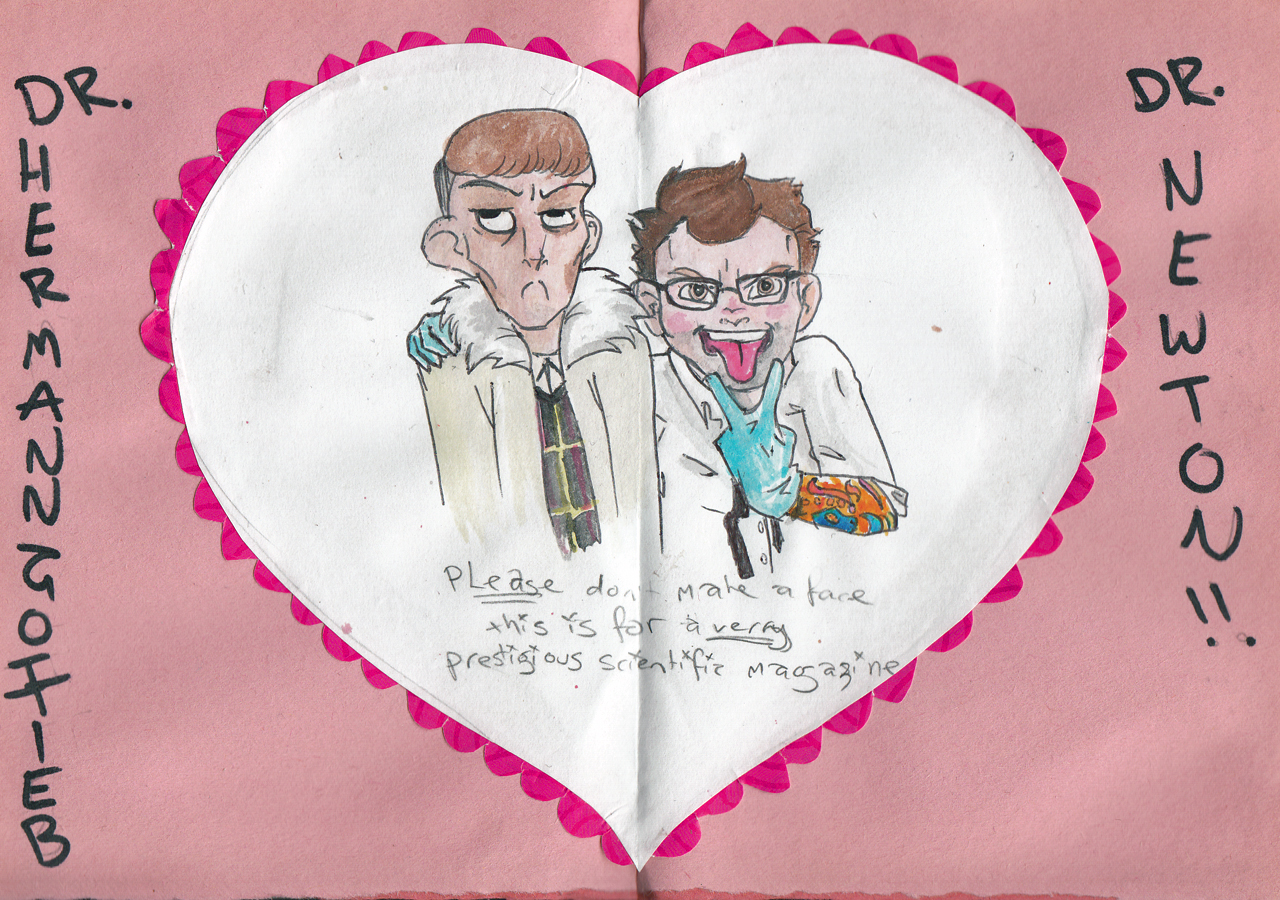 These are my two favourite pages.

You can check the entire thing (along with similar cards from previous years) on MaEmon’s page in the Gallery. (But probably shouldn’t.)