This is a story about the love affair between my cats and the Cintiq.

They fucking love that thing.

In all honesty, I’m not sure whether they like it because it’s warm , mildly out of the way, close to whatever it is that I’m doing, or a combination of those factors.

For the most part I don’t really care when they sit behind it, since being behind the Cintiq means they’re neither in my lap nor stomping all over the keyboard.

Several days ago I was working away when the Cintiq suddenly started going seizure-inducingly haywire; the menus were all flashing on and off as if somebody was repeatedly pressing the buttons at super high speed which triggered my brain into a similarly panic-fuelled malfunction. 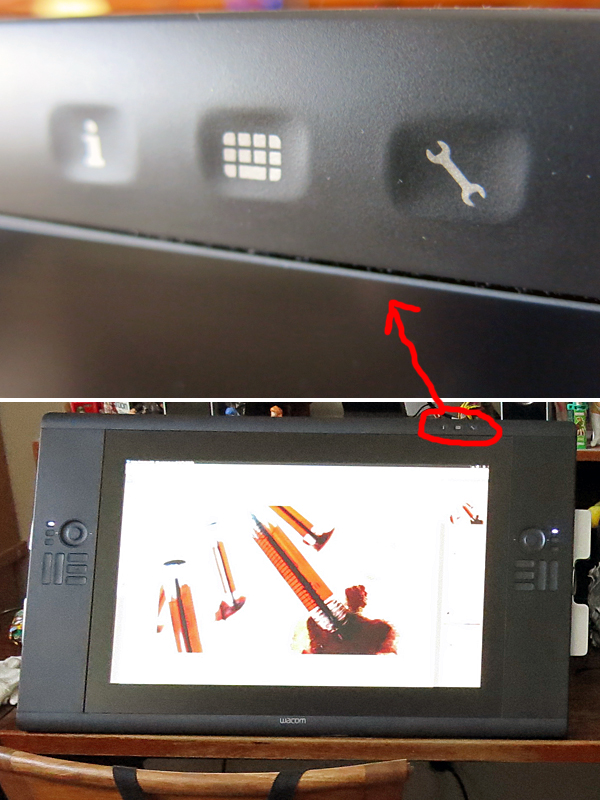 These buttons up here. Despite nobody touching them.

Turning it off and turning it back on again is naturally, the first course of action. While turning it off stopped the problem, it continued once switched back on.

Step three is jumping onto the Wacom forums and finding somebody experiencing the same exact problem. They were told to check the button state in diagnostics and that if this was changing it was probably a hardware malfunction and would need to be returned for repairs or replacement.

Step four is having a panic attack because the button state is changing and even if you didn’t have an unhealthy emotional bond with an inanimate object you still need to use it every day and really can’t afford to send it away right now not while everything is going wrong around you with the RSI flaring up in both arms and needing to sleep in a wrist brace and what if it’s carpal tunnel syndrome and you need to get a surgery and they mess up and you lose the use of your hand which seems to have just happened anyway and is it normal to be unable to stand up in moments of stress this is really embarrassing there are guests over and I can’t even put my stupid computer problems aside for five seconds to say hi or eat and I’m so hungry did I actually just get sent to bed I haven’t even slept for days and- oh… right.

The final step is dragging your sorry sleep-deprived ass out of bed at 6 the following morning in order to learn that Tech Support was right. About several things. Firstly that I needed to sleep and secondly that the computer needed to be shut off, Cintiq unplugged, and everything just left the fuck alone to chill the fuck out for a few hours.

There was no hardware malfunction.

The Cintiq did not need to be indefinitely sent away for repairs.

The thing I’d overlooked in my panic was this guy right here: 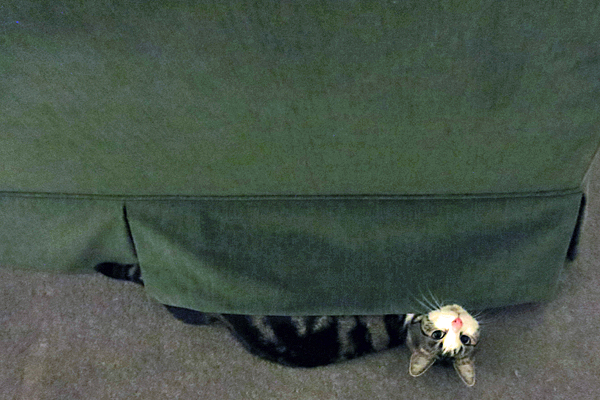 And his stupid face.

A stupid face which was repeatedly rubbed up and down the top edge of the Cintiq, where the buttons are located, causing a static build up triggering the buttons to think they were being toggled when they were in fact not.

Leaving it unplugged for a while allows the static to drain, gives you a break from the work, and everything will be fine.

Y’know, aside from all the interpersonal relationships you destroyed in a fit of anxiety.

Shit, since I’m just venting here today anyway, a few days after that event the wireless keyboard started fucking up; random shit coming out when typing, attempting to execute commands yielding unpredictable results. New batteries seemed like the logical course of action- and this is how I inadvertently learned what the alkaline used inside batteries feels like:

So, yeah… Keyboard is basically fucked. New batteries not really going to solve that one.

I liked that keyboard too.