The annual Melbourne Zombie Shuffle was on Saturday and, even with the current state of largely unfounded terrorism-based political paranoia putting a slight damper on the props situation, it was a marvellous day!

Hats off to the dedicated organisers who manage to make it bigger and better every year. 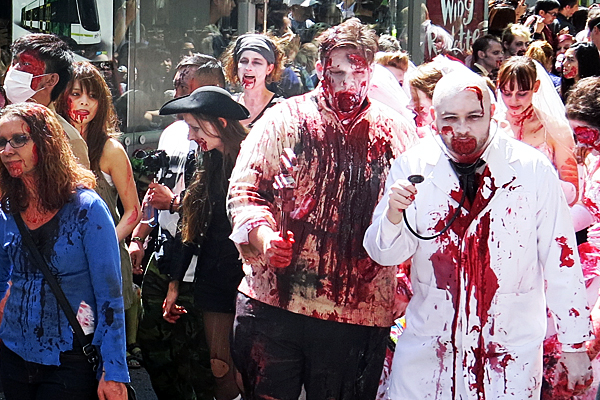 Medical staff are always the first to be infected…

Kindest regards to the city council who are willing to work the event into busy schedules around more serious political protests, road closures, and tram timetables. 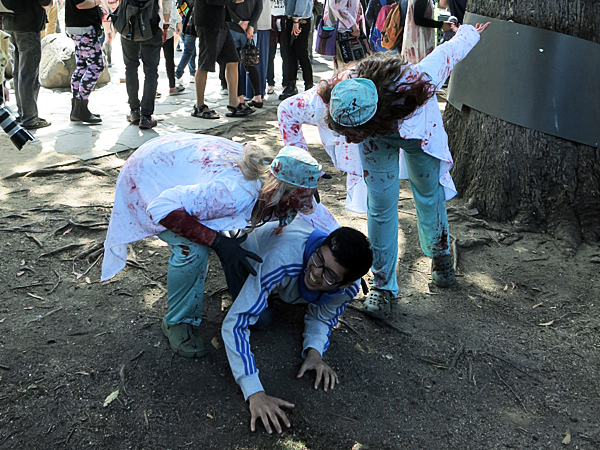 Even when projectiles and water/blood fights are discouraged, attendee spirits still remain as high as their costume standards.

And, of course, all the best to the shambling herd of costumed attendees!

None of the chums I’d ordinarily attend with were able to make the occasion, but since we were going to be visiting with family over in Fitzroy that afternoon anyhow I managed to convince Tech Support to join me instead and make a day of it.

If not in costume, he was at least able to hold the camera. 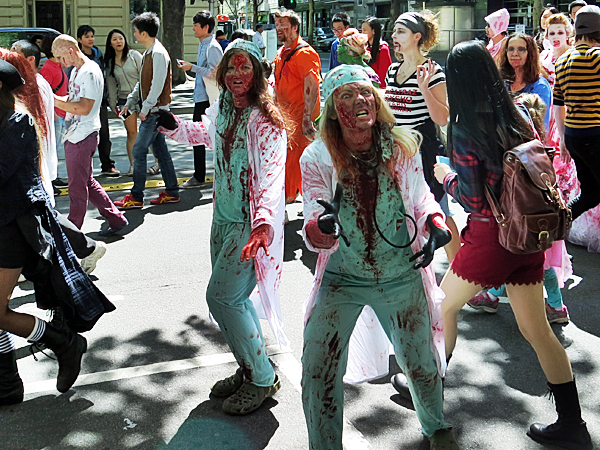 Being outside of the Zombies, he was able to take some really great shots!

We decided to drive in; me at the wheel looking like a trauma victim, Tech Support as my navigator because city driving can get pretty terrible if you have no idea what you’re doing. 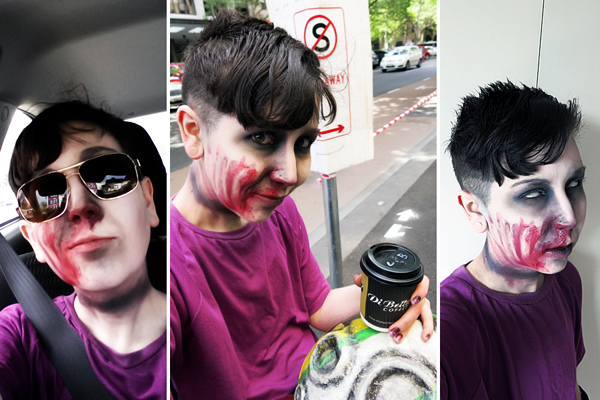 Public transport while in costume is fun with a group, but alone it’s safer to drive.

As planned, I donned a zombie Commander Keen with noose in reference to Doom 2. The make-up was fairly basic; heavy on the white face, lots of black around the eyes, green and purple for neck bruising, then just straight up lipstick/lip-gloss smudges for blood. 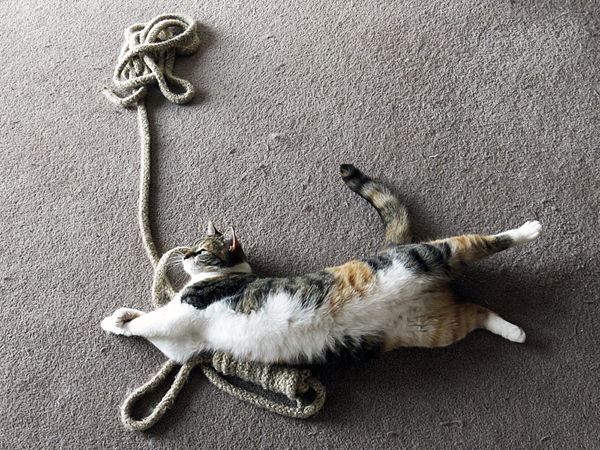 Lip-gloss actually made for a surprisingly good bloody nose, because it holds its shape but doesn’t dry out so looks nice and moist all day. 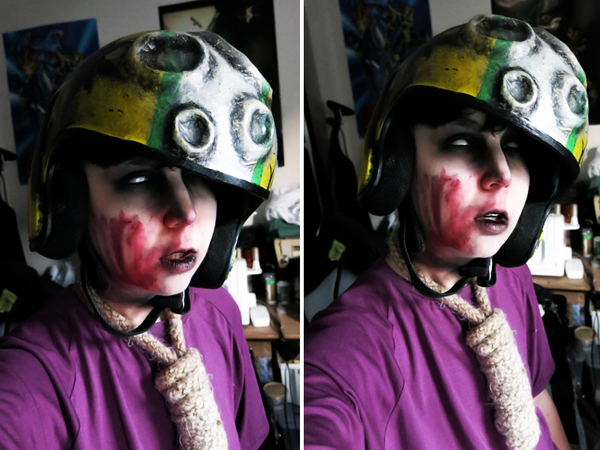 These were taken after returning home at the end of the day, after wiping the worst of the blood off my face.

Even treated myself to a manicure the day before the ‘Shuffle: 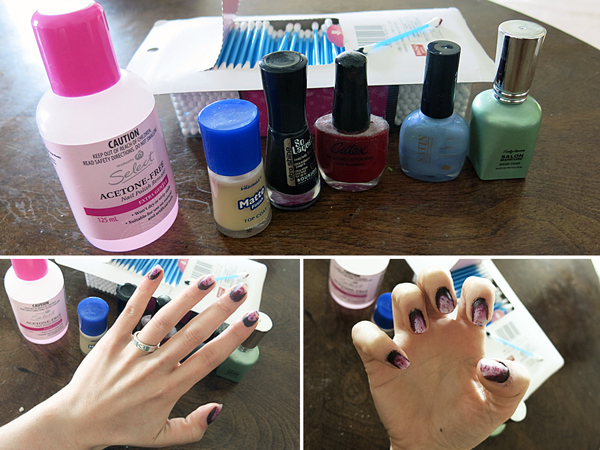 Bleeding cuticles- start with a clear base, then a coat of sheer blue (for the oxygen-deprived aesthetic), next dab some red and black around the cuticles with a cotton swab, and then it’s ready to be sealed off with a clear top coat (mine had a matte finish). Any mess around the skin is easily removed with a swab and some nail-polish remover.

As for Keen himself, while I did end up strapping the neural stunner to my leg, the pogo stick was left at home. 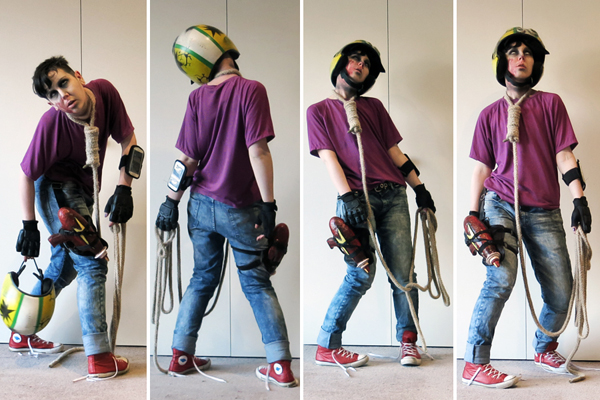 Real talk though; I was on the fence about going when I got up that morning, but… costumes have a way of improving my mood.

This year the ‘Shuffle was kicked off by Maracatu Estrela Do Mar drummers, painted up like sugar skulls, who led the procession from start to finish, drumming the entire way. They really did a fantastic job!

The weather was clear without being too hot, though I did end up with a minor sunburn on the back of my neck, where a combination of rope and T-shirt must have rubbed the make-up and sunscreen away. 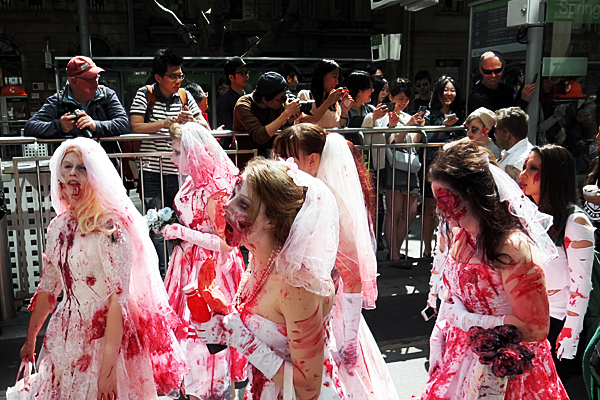 As far as notes from the day are concerned; 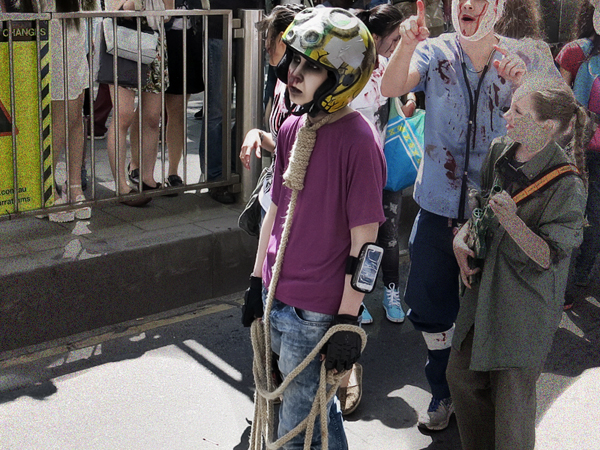 The question is; was it suicide or murder?

Keeping in mind that I was wearing a functional noose, there were some worries about the sorts of people who don’t respect property or personal space trying to yank on the rope (particularly when remembering how rough and grabby people were with the syringes back at the 2012 ‘Shuffle) and causing injury.

Thankfully the only incident was that one person knocking on the helmet- I get the feeling people are more likely to get handsy in a crowd if they can sneak up from behind, so holding the rope in my hands and having the knot at the front was probably a good choice. 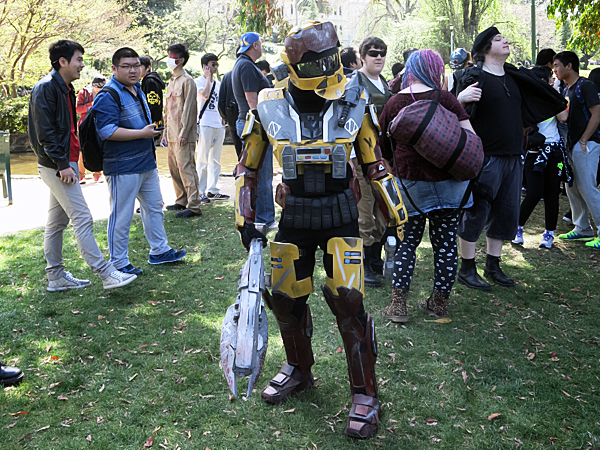 Not sure who/what this zombie was, but their armour suit was awesome!

After we were done shuffling I wiped the worst of the blood off my face and Tech Support treated me to a hearty ramen lunch at Kokoro. 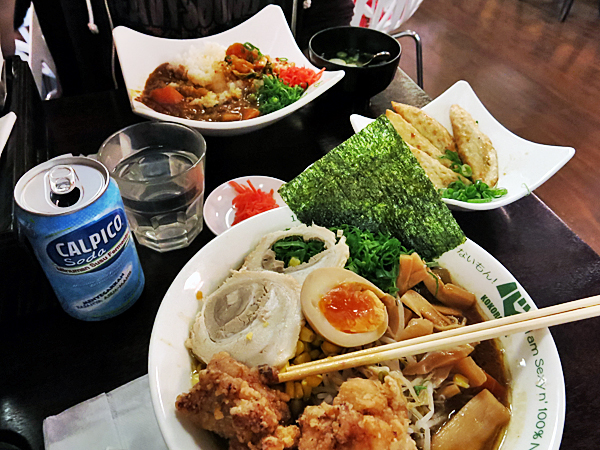 A group of zombies was even sitting at another table across from us.

Then we headed over to Fitzroy for a coffee break at Industry Beans before finishing the day off with family chills at my brother’s house.

Most of my costume was stashed in the car at this point though my face was still liberally bruised and smeared with blood, but there was no need to feel self-conscious as several other corpses had also staggered to that part of the city.

Many bars and clubs throughout the city keep the zombie shenanigans going long after the shuffle has ended, so it isn’t uncommon to see corpses lumbering about well into the night, with the last remnants of the plague dragging their sorry carcasses home the following morning.

Even without that; it is a surprisingly family-friendly event with children and even pets joining the festivities. Entire dead families and friends picnicing in the park afterwards is not an uncommon sight. 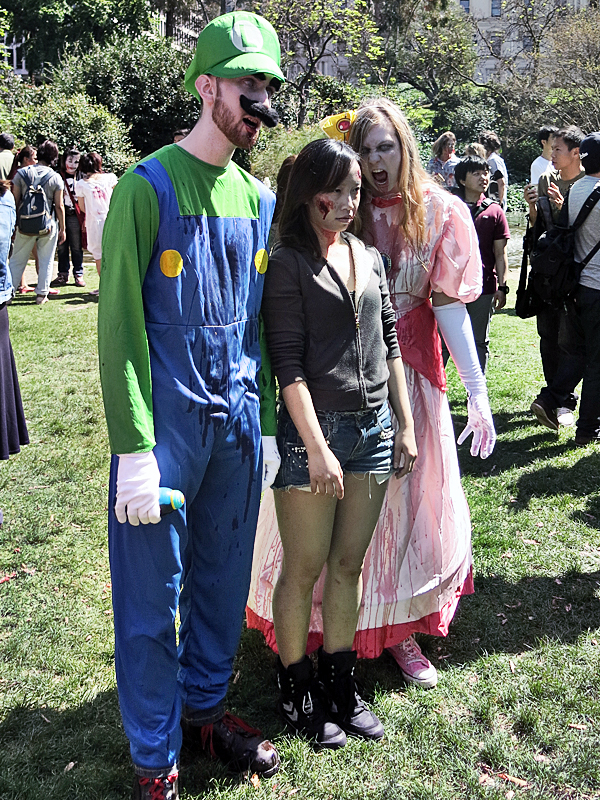 Truly an event to prepare us for the skeleton war like no other! 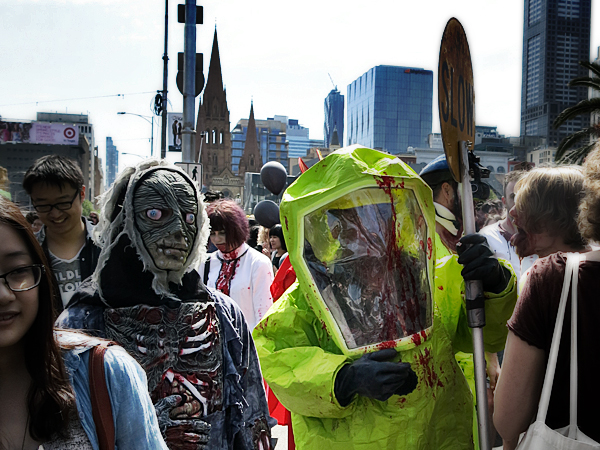 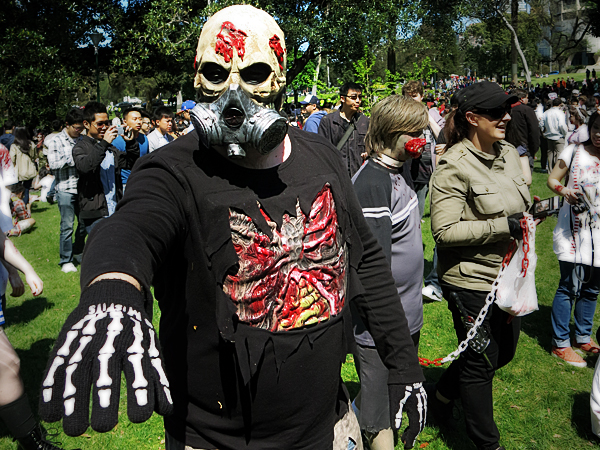 … And think about what kind of corpse I’ll be next time.