Let’s talk costumes, let’s discuss how my Hermann Gottlieb of Pacific Rim has been undergoing some degree of alteration since his last outing, in the form of an updated ID badge (which has already been discussed in some depth), new shirt, and even new glasses.

The new shirt was picked up from H&M, it is a white cotton/polyester blend featuring a thin black grid in size XS- comfortably loose around my shoulders and collar, but not impractically so.

Similar to the previous shirt, the new one did not feature a buttoned collar, however this was easily rectified with my mother’s buttonhole capable domestic sewing machine along with two small white buttons I happened to have on hand. 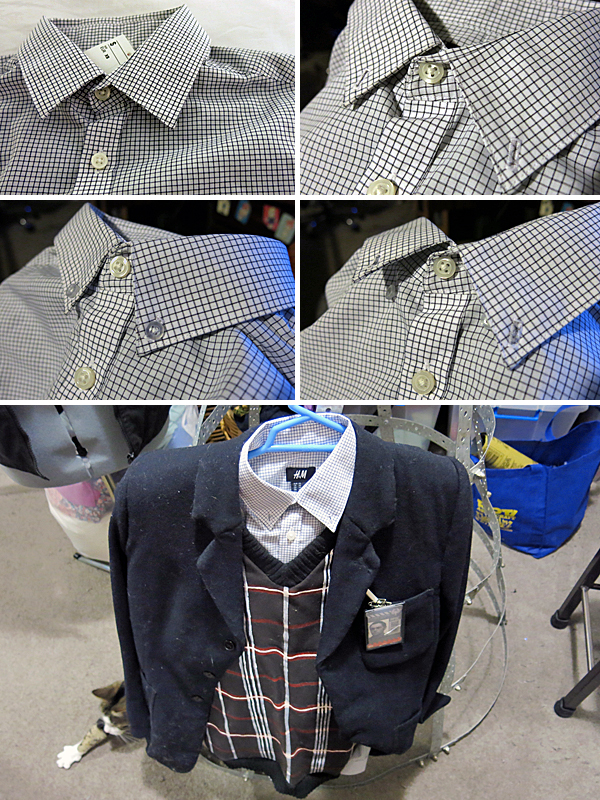 The previous shirt was grey with a red grid, and far too large for me (even for a character with a wardrobe as ill-fitting as Hermann’s).

As for the new glasses, they were picked up from one of the small market style kiosks in Melbourne Central (upstairs from the train station, below where the big fob-watch is), though I am unsure of the brand. 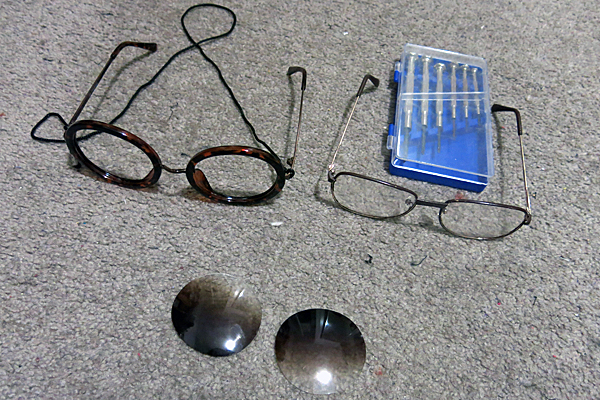 New glasses Vs. old; you can see the new ones are much larger and feature a more rounded shape.

They were sunglasses, with thick plastic frames and thin metal handles.

The bridge over the nose has been altered with some polycaprolactone, frames painted brown, and handles painted gold. 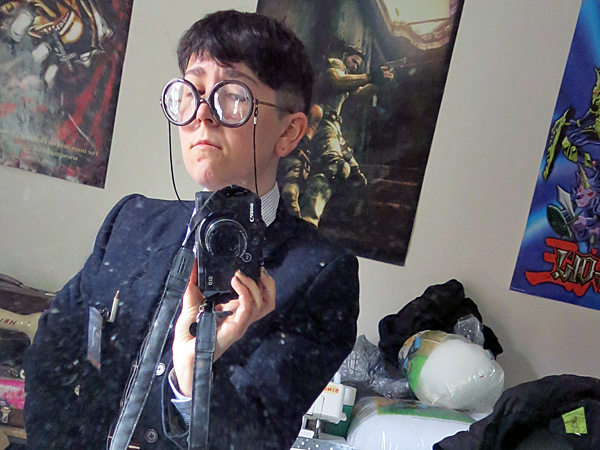 As for the lenses, I made some attempt to remove the tint from the supplied set without much luck. Then I briefly considered taking them to the optometrist to have my prescription fitted, but ultimately scrapped the idea as they’re cheap frames which have been altered and painted, thus the optometry staff would likely be more interested in just selling me an entirely new set of frames (as for getting new lenses fitted prior to the alterations, in that scenario I instead run the risk of damaging a perfectly good set of lenses with my work).

So, if you’d like to sit down and take some notes for a minute, I will describe to you a method of fashioning some lenses for cosplay glasses… 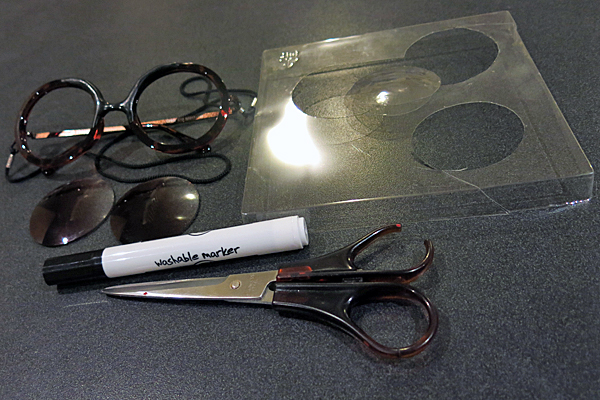 “Why do I need to make lenses when I already have lenses?”
Because the lenses the frames came with are tinted, you don’t want sunglasses, haven’t had any luck removing the tint, and the optometrist won’t touch your shitty cheap frames to make proper lenses- don’t you dare get smart with me jackass we literally just covered all of that. 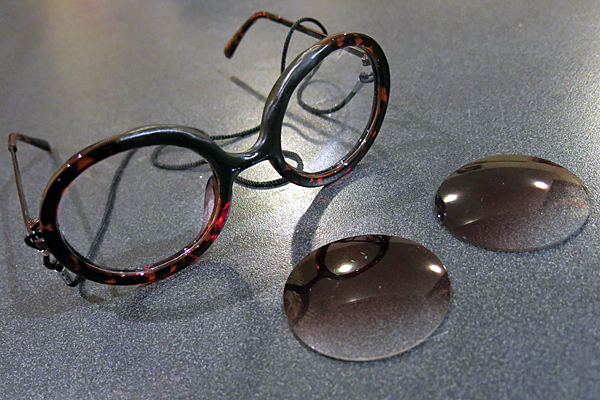 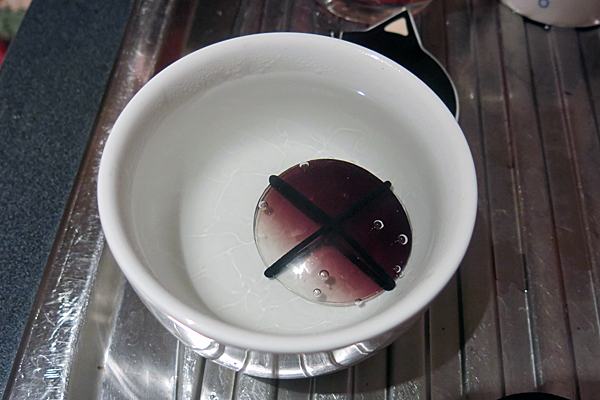 It’s far from perfect and can be a little messy, but for purely costume purposes it works out pretty well. 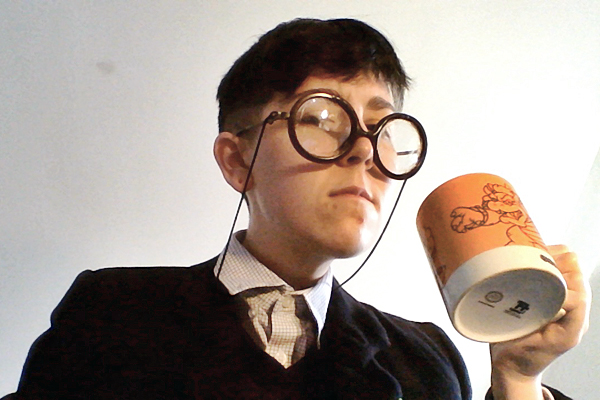 Generally I’m in the camp that having something in eyeglass frames (even if nonfunctional) looks better than empty ones.

At this point, the only thing left to really “perfect” my Hermann would be putting together a suit jacket with shadow stripes, though it will likely not happen until next year.

Painting stripes on the current jacket has been ruled out as it would need to be taken apart pretty much entirely to get them all flat and even, plus I’m not entirely happy with the overall shaping of the thing; so it would be easier to just start from scratch either with a vertically striped fabric, or by painting the stripes on plain fabric prior to cutting. 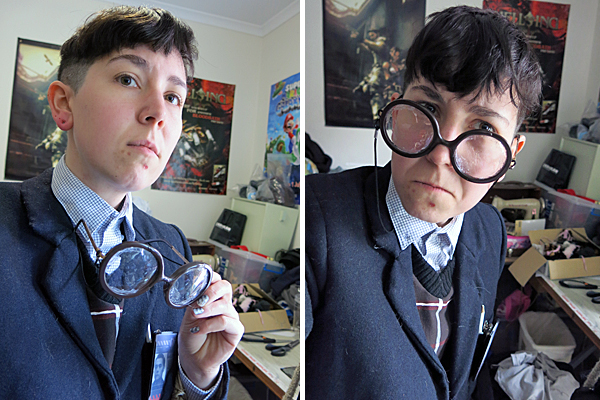 Hermann however, is not my only costume currently on the go expressing some Guillermo del Toro love.

In recent months I’ve gotten pretty into The Strain, and while he’s still in very early construction stages, I’m planning to step out of my box, characterisation wise, and cosplay the shit out of Vaun.

By this I mean, he’s somewhat more capable than the naïve types I’m usually drawn to. Maybe I’m finally becoming a man? Or maybe that’s irrelevant where (possibly genderless) immortals are concerned?

Maybe that’s what’s drawn me to the character in the first place?! 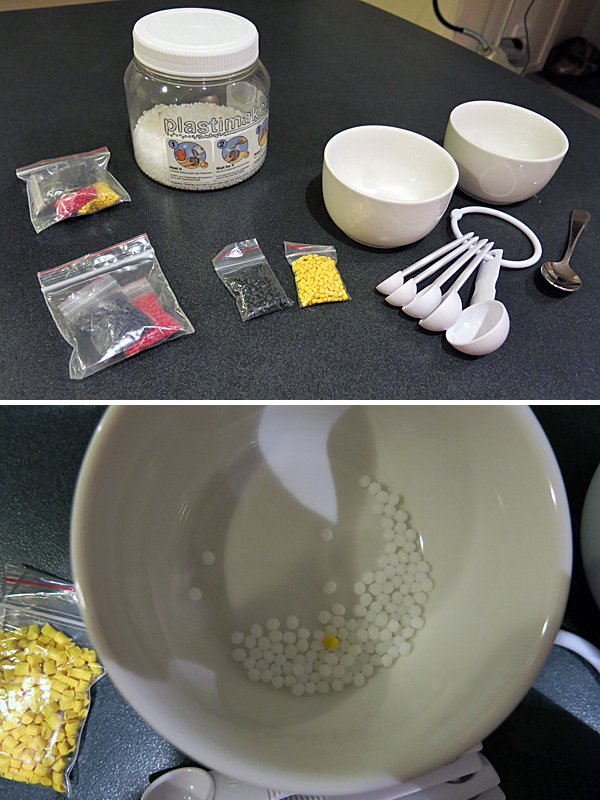 Plastimake with a small amount of yellow and black colour pellets added.

Like past teeth I’ve made, these are polycaprolactone moulded directly into my mouth; having them moulded directly avoids the need for adhesives, allowing the prosthetic teeth to simply clip securely onto my existing teeth (of course, any drastic dental or orthodontic work would mean the prosthetics no longer fit).

Show me your teeth.

There are two sets, preferences are yet to be settled; that mess will likely be figured out once I’ve got enough of his clothing in order to warrant a full make-up test (and figure out if I can make myself look bald on a tight budget without latex; shaving my head has not been ruled out).

The first pair I made features narrower, pointier teeth; 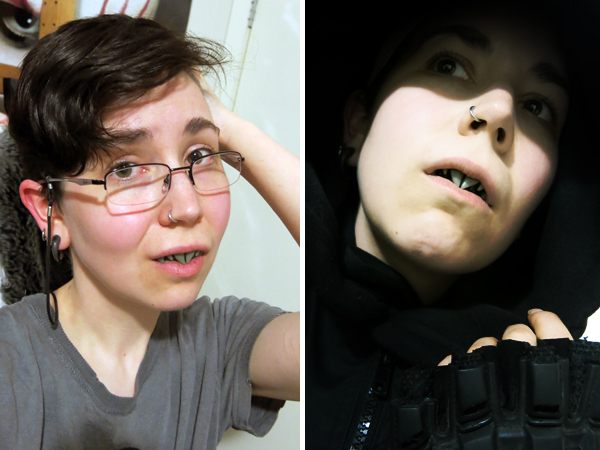 While the second are wider and flatter; 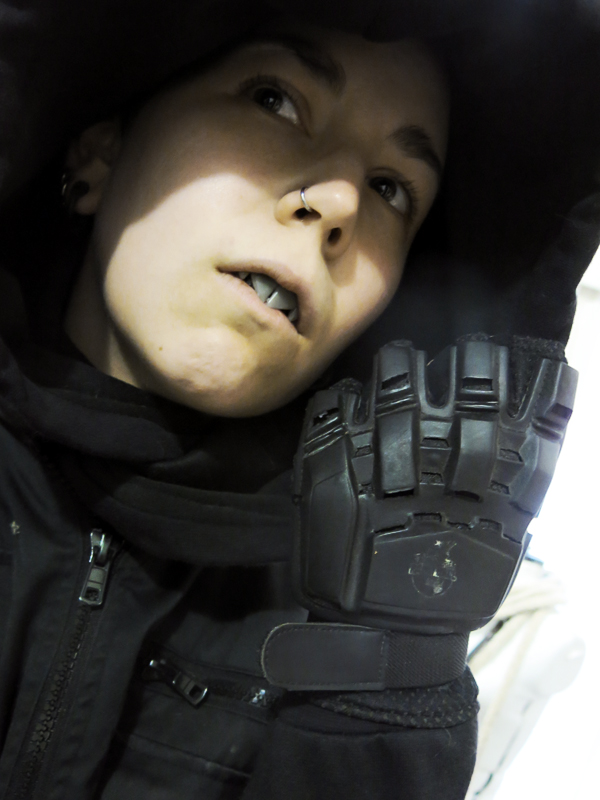 Enjoy the outfit pulled together from the closet, consisting of Owen’s hoodie, Chris’ tactical vest and paintball gloves.

Currently I’m leaning more toward the flatter pair, but time will tell.

Before calling it a night (or day, whatever), this feels mildly important: 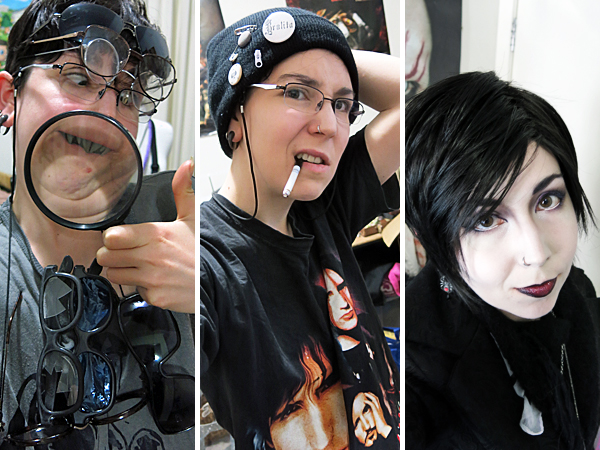 Sometimes identity can be difficult to define.

Or, at least, it did for a brief moment in time about a week ago.