Right now I am in recovery from an uncharacteristically busy weekend. 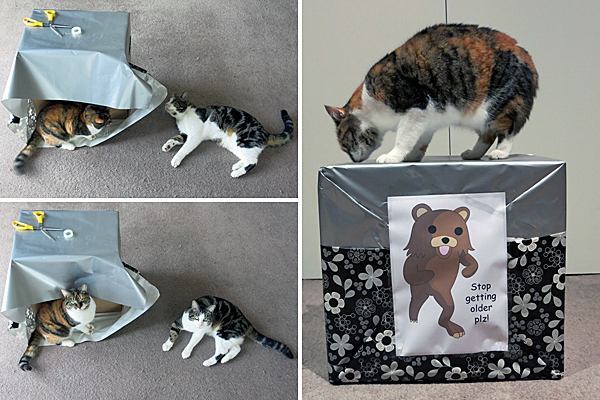 The Helpercat™s are very good at wrapping presents.

Some hours later, while purchasing cake to share with the guests who were to be visiting for his birthday celebration later that evening, Tech Support let on that he’d somehow wrangled up Sunday passes for PAX Australia, and revealed that those were what was inside the envelope. 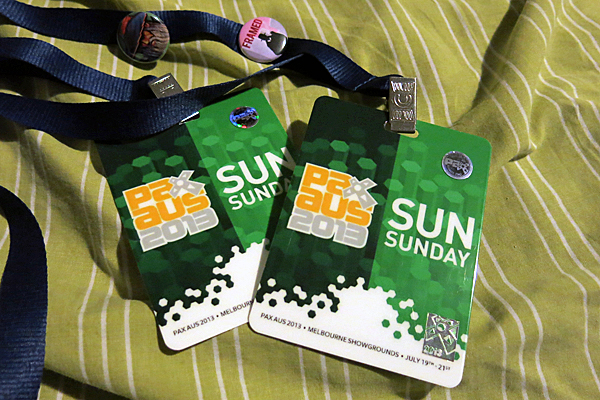 I then proceeded to spend the rest of the weekend on the verge of horrible gross sobbing because I’d accepted months ago that I’d missed out on PAX tickets (and also maybe because I’ve been in some kind of state of perpetual excitement recently and no longer possess appropriate emotional responses to feelings of joy).

He said he was considering not telling me at all and just taking me “for a drive” on Sunday, but reconsidered knowing that I like to wear costumes to these sorts of things.

Commander Keen was my costume of choice.

It’d been a couple of years since I last wore him and the digital picture frame in the old wristwatch had died. But it was kind of junky anyway and I remembered my father had given me an armband for iPods or something a while back; which just so happened to be the perfect size for my phone. So I set about neglecting our guests for the evening (no doubt my aloof behaviour was confusing and upsetting to them) in order to make some quick adjustments so the armband fit my wrist and a couple of tweaks to the wristwatch image dimensions so that it would fit as a telephone wallpaper. 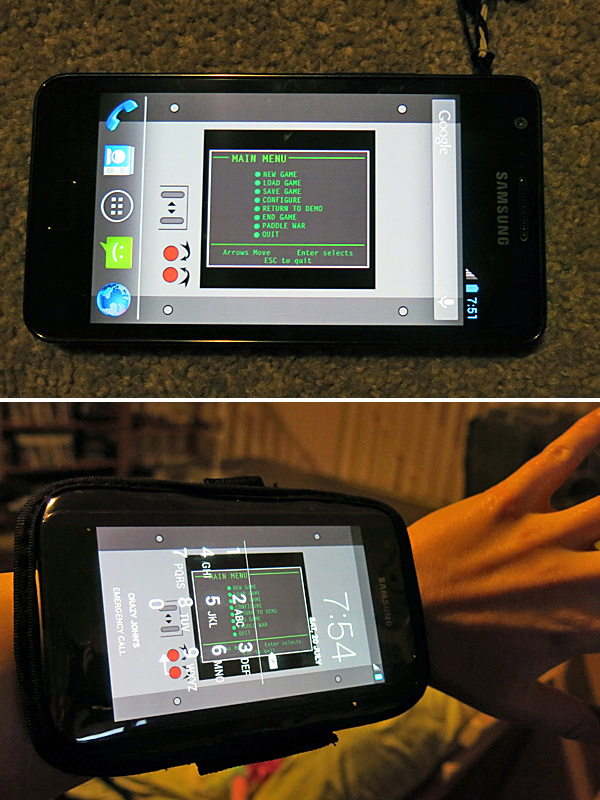 Of course, I can’t actually unlock the screen while it’s in the pouch.

Then, yesterday, we just had a full on beautiful day at PAX. 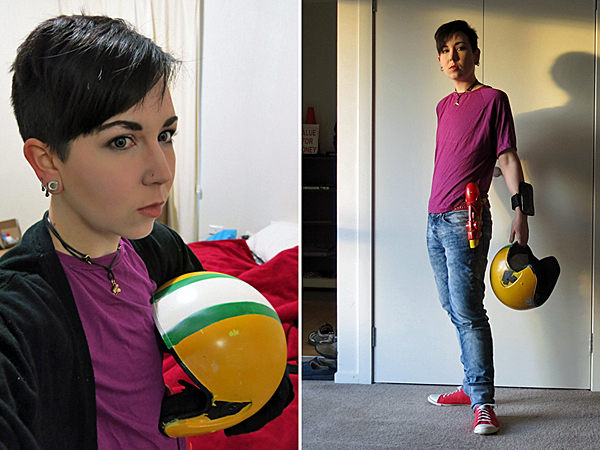 But still, NO REGRETS! It was worth it for all the Commander Keen fans. They are just so sweet and kind.

PAX was held at the Royal Melbourne Showgrounds (and apparently they’ve already confirmed that they’ll be back again next year) where they were utilising quite a few of the buildings- very efficiently, I might add! There was a plethora of games to play (computer games, board games, card games), food and drinks were readily available at a number of kiosks, there was loads of space to walk around, things to purchase and plenty of areas to just sit down and relax.

We even caught the end of a game of giant Jenga and now I kind of want a giant Jenga set to play at home;

The atmosphere was really vibrant and it was easily one of the most organised conventions I’ve been to; things like checking ID on the way in and tagging everybody with a coloured wristband depending if they were under or over the age of 18 so that they could avoid checking ID for every high rated panel or area, and having sections of the floor marked off and colour coded as being walking areas or standing areas really helped minimising the all too frequent convention problem of human traffic-jams. Queues for events were easy to find and navigate thanks to the diligent efforts of the Enforcers (queuing early for the big panels was highly recommended though, people would wait in line for an hour or more to get good seats) and the vast majority of attendees behaved respectfully and seemed in good spirits.

Also I got like… all of the StreetPasses on my 3DS.
So.
Many.
Seriously, it’s a good thing you can’t OD on StreetPasses. OR CAN YOU?! No joke, I probably spent a good 80% of my time on auto pilot following Tech Support around while checking StreetPass. 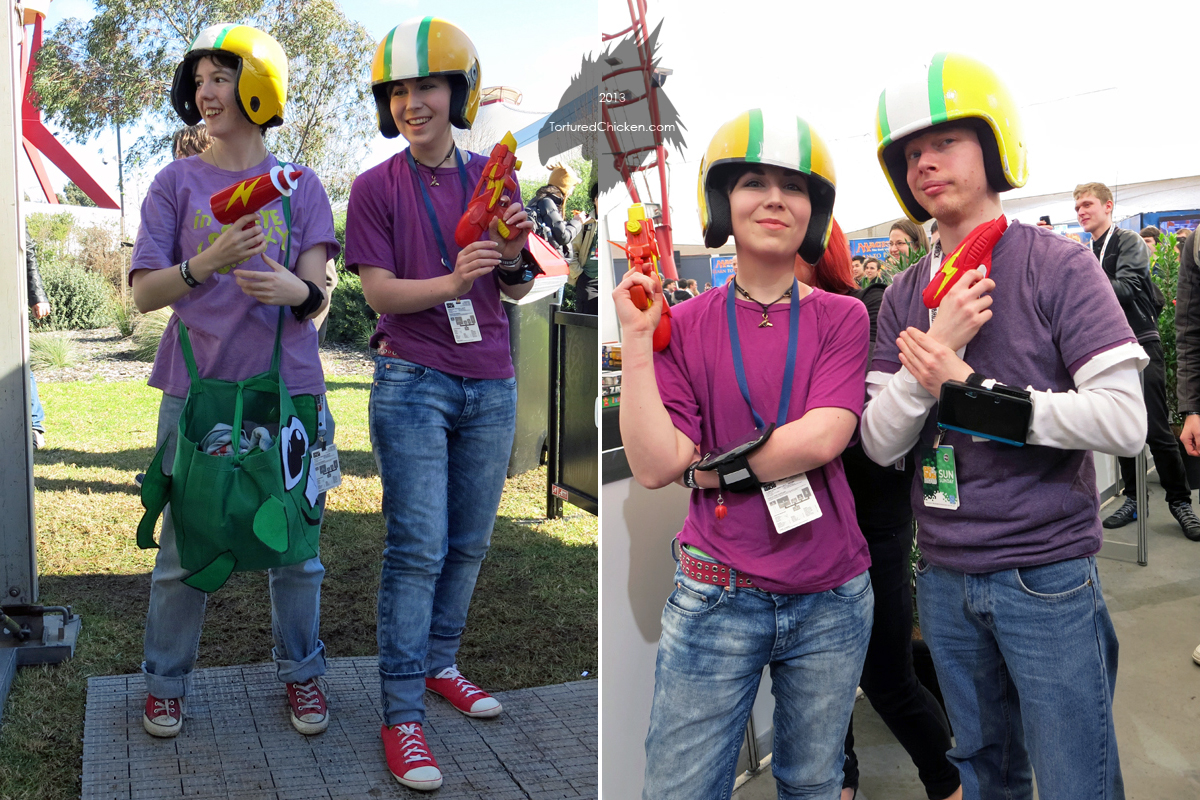 Seeing what Keen cosplayers do for the whole wristwatch thing is really fun, the first Keen I met was utilising their phone similarly to how I did (and also had a rad Dopefish bag), the second had their 3DS rigged up on a wristband which I thought was pretty nifty! Saves shuffling it in and out of your bag between StreetPass hits!

Eventually I hope to do a proper photoshoot of my Keen costume, but he actually isn’t finished just yet! See, I have this old harness and want to get it rigged up to strap a pogo stick across my back, but no actual pogo stick to work with. Yet.

Somehow I managed to be 100% distracted for the duration of my time at PAX and missed seeing anybody I actually knew in the crowds, despite knowing several people who were in attendance. Sure, I could’ve called or messaged but it was such an enjoyably busy day anyway, I didn’t really mind!

Next year I definitely hope to attend again, depending on how things go.

This was the first convention I’ve been to this year and I think I’d almost forgotten how much I enjoy them. Withdrawals much? I’ve barely even been to any cosplay meets!

Can hardly wait for Manifest next month!